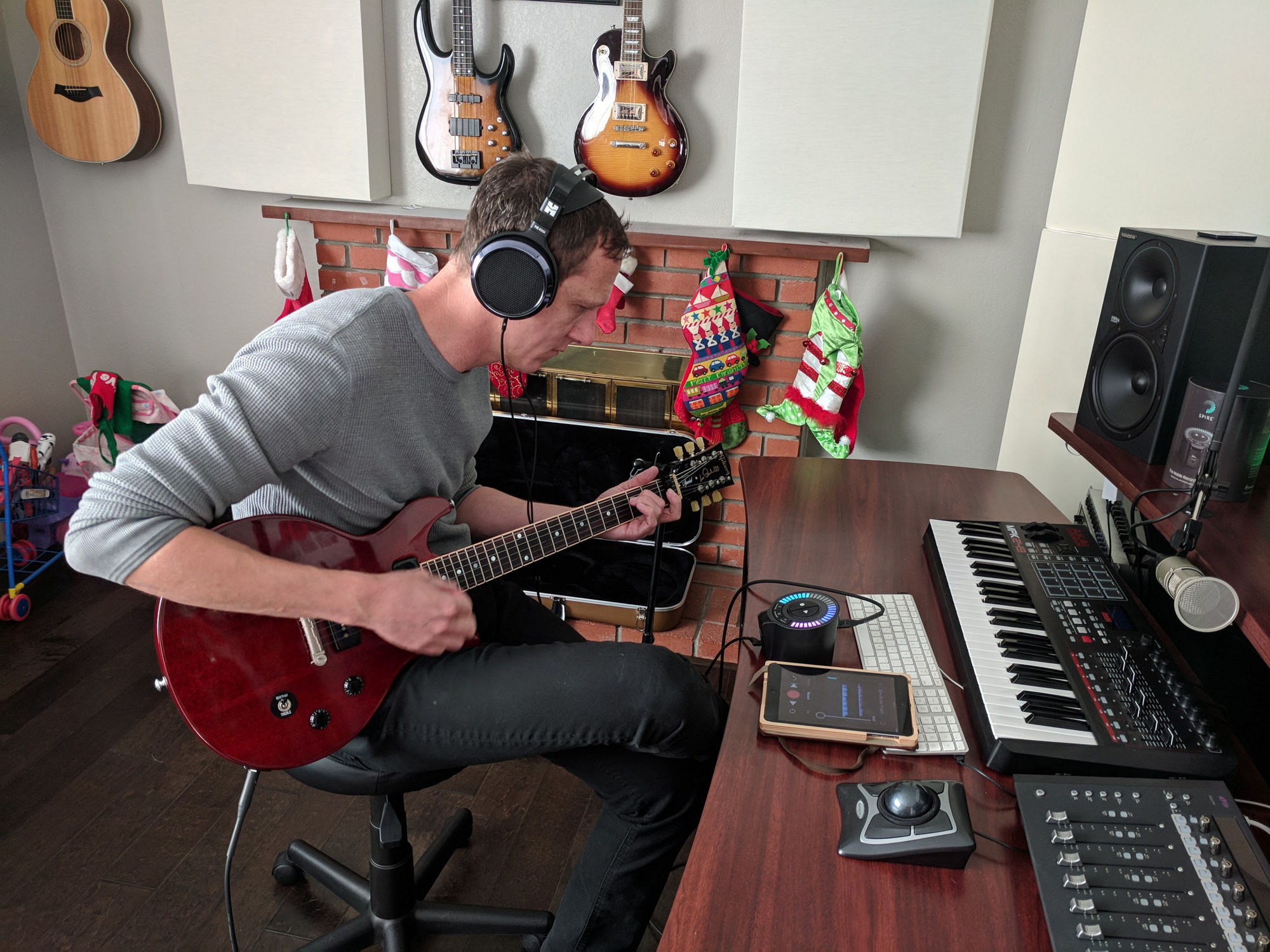 After discovering Spire Studio by reviewing it through the podcast that he hosts, The New Screen Savers, Howell wrote, recorded, and released 30 songs in 30 days using Spire Studio. He released each song for free and shared them on social media to promote his Kickstarter campaign, raising money to get his upcoming album, Fever Dreamer, which he hopes to get professionally mixed and mastered.

While Howell’s songs are more akin to high quality demos, most of which are under 2 minutes, the pace of his project to release usable, enjoyable sketches of songs is impressive nonetheless.

So listen to all of Howell’s songs recorded with Spire Studio, including a song that Jason recorded with his 4- and 7-year-old daughters, Savannah and Lucy, and read the interview below on how Spire has changed his songwriting process.

“I can sit down and have a fully fleshed-out song idea with Spire Studio in 15 minutes.” —Jason Howell

Tell me about the 30 days and 30 songs project.

Jason: Spire came along at just the right time for the Kickstarter. Since it's so easy to record quickly with, I was like, "How can I use this?"

My wife would drive our daughters to school, which takes half an hour. By the time she got back, I'd have a whole song uploaded. It's so cool—it's never been that fast.

I see Spire as a songwriting tool—as a tool that is a million steps beyond Evernote, which was my voice transcription tool for song ideas.

30 songs in 30 days is quite the clip. Was the pace challenging?

Jason: I've got to say, it comes pretty naturally to me. I did it partially because I figured it would be a good challenge. I'm always down for flexing a new muscle when it comes to songwriting.

I also realized the pace at which I could work with Spire: the fact that I could record a fully realized idea in 20 minutes. Then I could easily upload it to SoundCloud with the tap of a button.

The only thing that could possibly slow me down is if I had a crazy busy day and I didn't have time. But, if I can find half an hour every day, coupled with my Evernote log of song ideas, it's almost like I have an infinite pool with which to work with.

I just end up previewing until I find something that inspires me. I go, "Oh yeah, I remember that one. This would be easy. Two guitar parts. One bass." I'll do the drums with my mouth because I don't really have a drum machine that isn't hooked into Pro Tools. That takes too long. That's why a lot of those tracks have beat boxing. It was a little overwhelming to consider it, but I knew I could pull it off because of how easy it is to use the product.

I figured this would be a great way to promote the Kickstarter. If I'm creating a new song, posting it online every day with an extra link that points back with the Kickstarter, perhaps that would be the daily reminder that's not annoying. It's the daily reminder where I'm offering something to people and saying, "Here's something you can have. While you're here, maybe consider contributing to the full album." So far, it's worked really well.

Besides songwriters, who do you think might benefit from using Spire Studio?

Jason: I can see this as a really good educational tool too. My four- and seven-year-old kids have seen all my music equipment in my den, but I've never really brought them into the recording world with me before. After using Spire Studio, I realized how how there would be no barrier for me to lose them.

I could see that working really well in music learning spaces, for understanding the concept of multitrack recording without getting bogged down with all the extraneous details that go along with recording at a digital audio workstation.

What was it like recording with your four- and seven-year-old daughters?

Jason: Initially, I had to go into my bathroom and record because I wanted an isolated guitar. They're young, so it's impossible for me to expect them to sit there for three minutes and not make a single noise. I went into my iso booth, my bathroom upstairs, and recorded the guitar track.

Then I gave them headphones, and we just started to add some effects. Kids who have never heard anything like it before, they’ll go, "Oh," when they hear a deep reverb. They loved it.

We just set it all up, and I was like, "Alright, what do you guys want to do? Do we want to do the vocals first? Do we want to sing the song together? Should we add a little egg shaker or a tambourine and we can do some bongos?"

As we went along, I was able to show them the interface on the iPad and describe what they were seeing. I’d say, "You see those little spikes there? That's the guitar. This part where suddenly you see something and then there you don't? That's silence, and then that's when we start singing."

They actually started to do it really well. They were scrolling through the tracklist to see what's down below and to know when they needed to start singing. I was able to show them the mixing interface and be like, "Let's put our vocals over on the left side." They had fun dragging that around.

There's no way at their age, that I could have ever expect that kind of understanding if I were to open up a Pro Tools session and say, "Here's how you do it." They'd get lost in a second.

But Spire? It's a professional tool, but it's also approachable and on the level of a toy that they can understand, if that makes sense.

How has your experience been using the effects in Spire?

Jason: My experience with the Spire effects has actually been really good. Initially in my old school digital audio workstation thinking, I was like, "Why do these have to be a record effect? Why can't I put them on in the mix?" But over time I've realized why. The point is not to set an elaborate mix, the point is to get your ideas down.

To that effect, I'm in love with the Deep Space Vibes reverb. I play around with that a lot.

“I can just grab my stuff, take off to a room, close the door, and that becomes my recording space. I can't even tell you how liberating that's been.” —Jason Howell

I'm very pleased with the quality of the reverb that Spire Studio has. I'm a reverb nut. I've always loved the sound of a good solid reverb, and I'm pretty happy with what you guys have there.

Where have you recorded with Spire Studio?

Jason: The majority of time has been in my studio space.

I've had a few late nights where I get home and everybody's asleep, and I really want to do something with acoustic guitar, or I really want to sing and not be worried about waking anybody up. I'll just go out to my car, turn on the heater, and I'm out there for an hour sitting in my car producing something.

I've gone into my garage in the darkness, just put on a nice thick reverb and keep hitting rerecord until I get my vocals just right. That's to find a cool mood, kind of get me in the zone.

I've gone into my daughter's bedroom at times, because it's the furthest away from all possible noise in the house.  I've also recorded in my bathroom.

That's the beauty of it, right? It has a battery on it, so I can just grab my stuff, take off to a room, close the door, and that becomes my recording space. I can't even tell you how liberating that's been.

What’s one tip you can offer for other songwriters using Spire Studio?

Jason: It's easy to not think about the soundcheck part when you're kind of going along, but there's nothing worse than having the best take and then you go back and listen to it and realize it was set too hot and you're flatlining on the top, and it just sounds distorted as a result. Definitely make sure you use the Soundcheck button.

Would you ever use Spire Studio to collaborate with other musicians?

Jason: Absolutely. Collaboration is something that I don't do a whole lot of, and I used to do a lot of when I lived in the same town with my best friend back from Boise. He and I recorded cassette upon cassette on a 4-track recorder for years. We got to the point where we said we would know what each other was about to do on some random degenerated song that we were just writing at the moment. We got to be able to read each other really well. I really miss that. I've always wanted to be able to write with him again.

I guess the challenge, of course, ends up being that he doesn't have Spire Studio and I do. But, I've already told him he needs to put it on his Christmas wish list.

Spire Studio reminds me of the liberation that we felt back in our TASCAM 4-track days. This is the first time in a long time where my time has been just about creating—having an idea, and instead of ruminating on it for a million years, finally doing something with it.