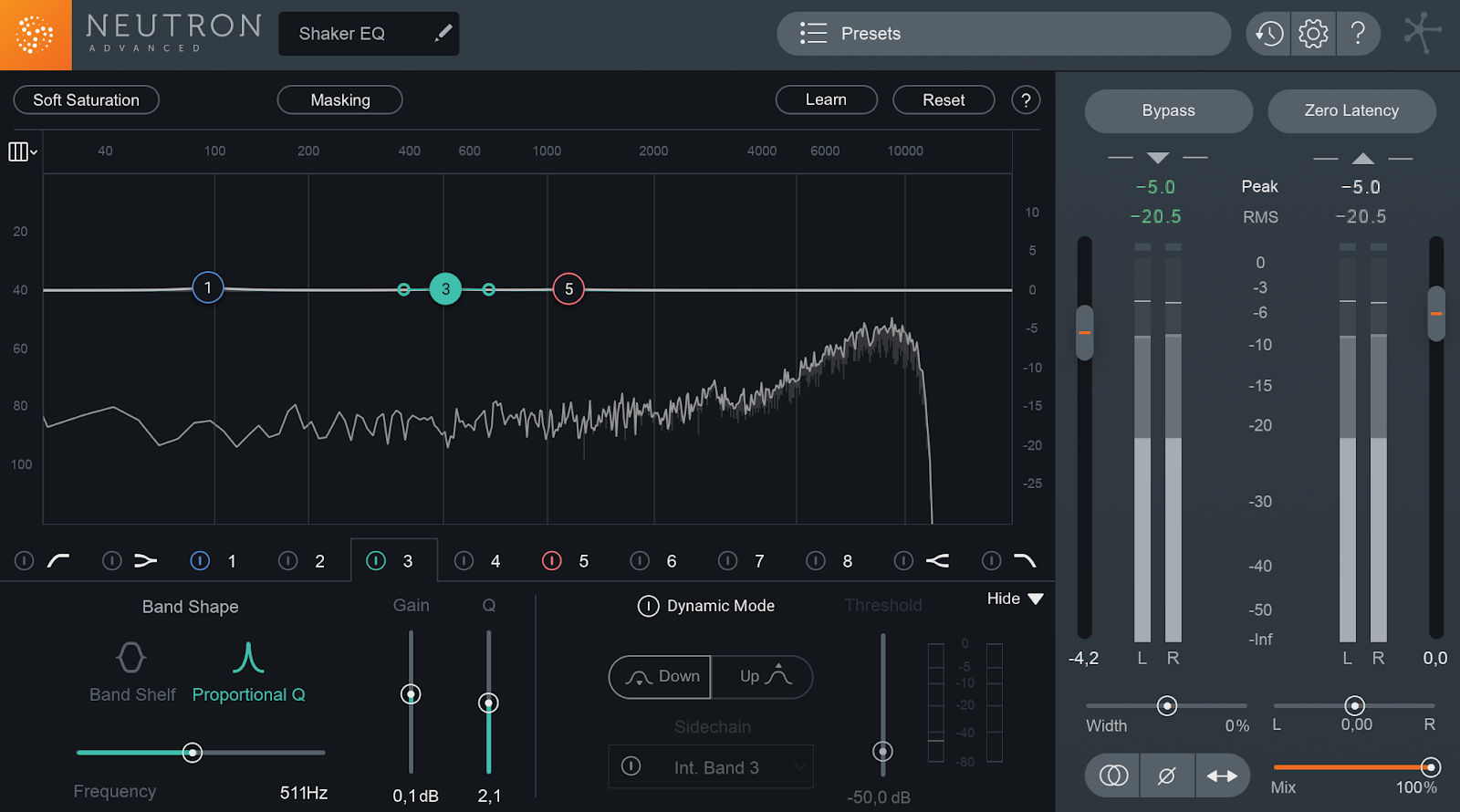 A high-pass filter is a simple, but effective EQ curve that scoops out unwanted low frequencies from an audio source. Like most engineers, I use them at many points in my mixes to clean up woofy signals and tighten up arrangements.

There are, of course, limits to how often these handy tools should be employed. Recklessly making cuts just because you can leave your music sounding thin and without a groove. To avoid this, as well as provide focus to your workflow, here are six ways to use a high pass filter when mixing.

Almost all audio sources, especially of the live variety, include unwanted sounds that lurk below the most important frequency information.

While consistent wind and humming are usually pretty easy to spot, this is not always the case. Many unwanted sounds are hidden by the louder core of the signal and can be overlooked, especially when working against a deadline. As we get to the lowest parts of the spectrum around 20–40 Hz, we might not even hear rumble due to the limits of our hearing, making it something of a silent headroom killer in large quantities.

Take the following screenshot of a shaker in Neutron as an example. Although I’m only interested in what’s happening around the 1–2 kHz mark, nearly the entire spectrum is active. If I double or triple the shaker track, or add more files with similar spectral activity, the cumulative buildup of noise will mask major sections of the mix. A noisy shaker in Neutron 2

Take your time to scope out where these sneaky sounds exist, and as you remove them, consider that where you set the filter cutoff will depend on the signal at hand. What worked on one instrument might grab too much of one or not enough of another.

Top Tip: If you’re using Neutron and have trouble determining just how high you should cut, hit command (or control for PC) and select the lowest node, which will single out the band of frequencies it covers. Sweep up until you start to reach the meat of the instrument and pull back slightly, then release the click to hear the entire signal. You want the noise to be gone without compromising the intelligibility or power of the audio.

As the central element of a song, vocals need to sound clear, and most of the time, everything below 100 Hz only prevents this. There might be a low hum from the mic or studio environment—especially if you recorded in a bedroom vocal booth—or bassy build up as a result of the vocalist getting too close to the mic—a phenomenon known as the proximity effect.

Don’t be afraid to use a steeper curve here, but exercise caution as you approach the fundamental of the vocal, the lowest frequency that determines the musical note. The weight of the performance sits at the fundamental, and even a slight intrusion is enough to squash the energy. A loud voice without oomph will struggle to carry a tune from start to finish.

Let’s listen to how a high-pass alters a vocal in the audio file below—the first clip is unprocessed, the second has a high-pass at a sensible position, the third high-pass cuts through the fundamental, and the fourth is noticeably thinned by an aggressive cut.

We can hear a reduction in low-end noise from the first to the second clip, which has the inverse effect of brightening the vocal (it’s already somewhat harsh to start with). The third clip is where a lot of new mixers will end up—in an honest attempt to clean the vocal, the cutoff is placed too high in the spectrum, sucking out important frequency content. If you really don’t pay attention at this stage, you’ll end up with a paper thin vocal, like the fourth clip.

If you’re dealing with a deep voice buried in the unwanted mud, try a pass of RX 7 with the De-hum, De-rustle, or even Music Rebalance modules to better isolate the vocal. Then apply a more gradual filter slope, plus an EQ bell curve, to attenuate buildups in the more mid-high bass range if necessary. There’s no exact science here, so a bit of experimentation is necessary to get it right.

If the kick and bass elements in your mix sound good on their own but struggle to make an impact in the context of the mix, this can be a sign you need to take away the lows present in other instruments.

This issue often appears in the low-mid range, between 150–350 Hz, which is what gives music its heft and power. It's one of the more problematic areas in a mix, since the higher harmonics of kicks and lower harmonics of synths, guitars, and much more all converge here, which leaves you with a mix that sounds bloated and tired.

Top Tip: It might be tempting to apply a drastic global filter that stops anything from entering the low-mids, but this will take away too much energy. Instead, focus on shaping individual instruments with subtle cuts to make space for the kick and bass. These two instruments have the most important role in the low-mids, and as such, should be heard with clarity. Reining in conflicting frequencies from less important elements will greatly help.

Learn how to do this with the Masking feature in Neutron and helper tool Relay below:

A stuffy low end can drag down a mix and make it feel stuck. The kicks don’t come through and the bass is more floppy than punchy. If your low-mids are in order, an excessive buildup of mud somewhere in the 20–35 Hz range is worth investigating.

By high passing these frequencies on the drum mix, or even on the master output, you remove unnecessary noise and tighten up the low end. This also has the bonus effect of making the mids and highs seem more present and loud. It is, however, easy to overdo it here and take away too much bass, making other parts of the spectrum brittle in comparison.

If you find yourself doing this time and time again, your room and not your skills might be the issue. Untreated bedroom studios are notorious for over-representing low-end and this might be what you keep hearing! So be sure to test this move out on multiple playback systems and A/B judiciously before sending the mix back to a client. There should be a feeling the mix has opened up without losing its edge.

5. Try dynamic instead of static

Across most of these examples, the types of audio mentioned are dynamic in nature. Vocals, basslines, and percussion change over the course of a song, sometimes very quickly, and the high pass filter you set should be able to reflect and follow that movement.

A dynamic EQ allows for just that. While most filter cuts are static, in that they don’t change according to the incoming signal, dynamic EQs are able to ‘track’ signal content, and change cutoff points to better shape sounds as they change throughout a mix. This is particularly helpful when working with signals that, no matter where you set the cutoff, sound either too thin or too muddy.

A dynamic EQ cut offers the perfect middle ground. It will let in some less desirable frequencies so you can feel a lower-range presence, but clamp down as soon as they become too active. This allows for the natural character and space of a recording to come through without it becoming overwhelming.

A dynamic cut can come in handy with just about all instruments and especially vocals. Watch how in the video below with the Follow EQ in Nectar:

For beginner producers and mix engineers, high-pass filters are one of the most overused tools due to the obvious and immediate effect they have on a sound. With a strict hand, one might nix all lows that poke out from mid and high range instruments, and in the process, unintentionally remove what actually gives the mix depth and groove. Even worse, steep curves can introduce a ringing or distortion around the cutoff point, especially when placed partway through busy material.

All this to say—If a hi-hat or other upper range sound has something interesting going on in the lows that provides punch to your music, you don’t have to severely filter it out just because these elements typically favor higher frequencies.

When we use a high pass filter, we are striving for clarity. But clarity in a mix doesn’t come solely from EQ and filtering. Pan position and level are equally useful to help separate elements in a mix. So when balancing tracks, be sure to explore these options before defaulting to a high pass.

Despite the simple function of a high pass filter—to remove low frequencies from a signal—it is a versatile tool that can be used in dozens of scenarios for a greater sense of tonal balance.

Like all audio tools, however, it has the potential to be overused with disastrous results. When I first started producing and mixing music, I’d go overboard with my filters and EQ cuts and end up with music that sounded unnatural and flat. Over time, I’ve learned that subtle, intentional moves are what gets the job done more effectively.

So, high pass only what needs to be high passed—what I mean by this is cut the frequencies that are stopping your mix from communicating clearly to the listeners, and not those you think should be removed based on a preset, instrument range chart, or yes, even a mix tips article.