Jump to these vocal reverb tips:

Listen to any professionally made song, and focus on the vocals. Do you hear how present they are? How cleanly they cut through the mix? And in some extreme cases, just how loud they are?

The vocal is often (nearly always) the most important element in a track. The presence that you hear in a professional vocal helps the listener understand the lyrics and connect with the song. This human element is accessible to the listener and should be clear to hear.

Reverb is a common technique for affecting vocals, but can sometimes prevent this necessary vocal clarity. In this article, we’ll discuss some ways to apply reverb to vocals in a way that allows them to still cut through the mix.

We will be covering vocal reverb techniques and how-to’s using iZotope Neoverb, but you might also find it useful to check some instructions and tips like this article for quickly learning Neoverb before you jump into this tutorial.

We will be applying reverb techniques with some audio examples from Florence Wiley’s latest record I mixed, titled My Next New Low.

Looking for even more ways to use reverb on vocals? Watch as Brian Fisher shares how to use Neoverb and Nectar to get ethereal, dreamy vocals in your mix.

Why use vocal reverb?

Vocal reverb adds audible space, distance, and dimension to a vocal, where a vocal without reverb just sounds like it’s in a void. You can use any kind of reverb for vocals, but depending on the application, certain types and settings might fit in easier. Let’s first listen to a vocal with and without reverb, for context.

Can you hear the difference? A good sounding vocal can be made better with some extra smoothness and richness from the reverb. The decay makes the voice sound like it’s singing into a space, even though it was recorded in an apartment living room. More often than not, we are using artificial reverb to create a sense of space–making a new environment of our imaginations choosing with its own reflections, decay, and personality.

Can you have too much reverb?

Reverb exudes a vibe and can give your vocals a unique character, or at least, some extra depth and smoothness. If you’re like me, you think about reverb when you hear another track, wonder what it is, and how it got there. Whether you can have too much reverb is up to you, and you might be asking yourself that question for a long, long time.

Tips for Using Reverb on Vocals

1. Use send and return channels for reverb

When I began producing music, I often approached reverb as if it were just an effect applied to a sound, as you would with processors like compressors or distortion units. However, with reverb, you’re essentially adding another signal into your mix, like if you added another instrument. Therefore, reverb should be treated as its own element, and you should have the ability to process and affect it as such.

To add reverb to a vocal, you can either insert the reverb effect directly onto the vocal, or use a send and return. The send and return method will give you more control, and I would recommend it for 9/10 instances of applying reverb to vocals. Doing so allows you to treat the reverb signal as its own distinct element in the mix. With the option to process the dry vocal and reverb independently, the two can more easily coexist without causing you to sacrifice vocal clarity.

To do so, make a new aux/bus track with a 100% wet instance of Neoverb, and send out from your dry vocal channel with an available bus. This is what it looks like in Pro Tools: 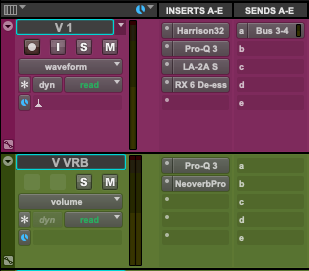 Send and return channels with reverb in Pro Tools

I rarely insert a reverb directly on a vocal—perhaps as a quick placeholder, or maybe when I’m really dedicating myself to a very wet and affected signal with perhaps even more processing. Utilizing a send and return will give you much more level control for balancing, and for automating your vocal and its corresponding reverb.

Now that our reverb signal is isolated, we can process it in several ways to let the dry vocal cut through the reverb more clearly. One common technique is to use an EQ to attenuate key vocal frequencies in the reverb signal.

EQ is great for overall bright to dark tone shaping, but it’s also crucial for cutting unwanted conflicting and swelling frequencies between your dry vocal and reverb. Using both the masking function in the upper left of the EQ section in Neoverb, as well as the unmask function, will serve as great guides to help create an uncluttered reverb sound.

For starters, watch out for low frequencies, low mids between 200-600hz, as well as high frequencies spiked by vocal sibilance.

Neoverb has both a Pre EQ for cutting out sound before it gets to the reverb (try putting in a high pass filter from 100-200hz to cut out plosives and rumble), and Reverb EQ that helps keep your reverb clean and under control at the bottom of the window. 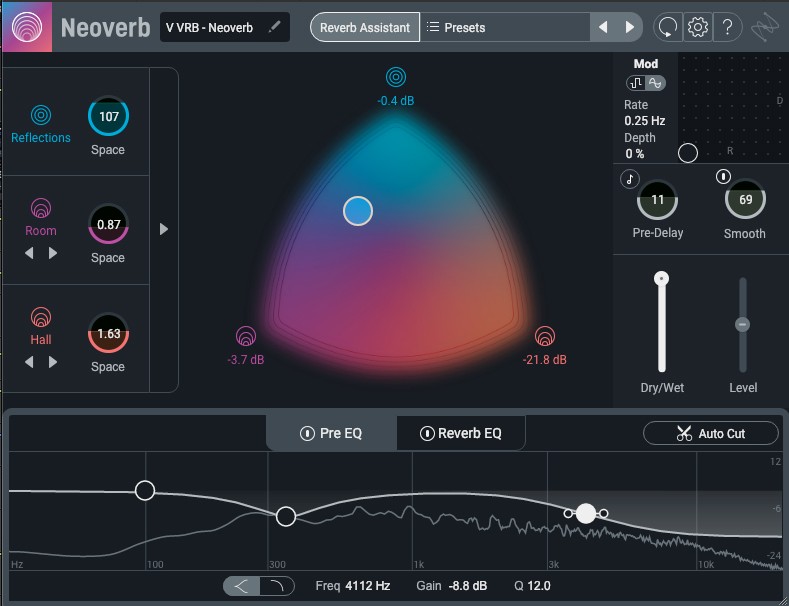 Here’s a before and after of an isolated vocal I cleared up with some low and high shelf EQ:

Just east of space, time and size, you’ll find some more advanced tonal controls that will be helpful in dialing in your vocal tone. I’ll highlight a couple important ones. The Crossover slider controls the dividing frequency between low and high-frequency reverb engines, and the Balance graphic allows you to set which is more prominent, with 0.5 being equal.

This tip goes for entire productions in general, as well as for processing multiple vocals in the same project.

Reverb is meant to create the effect of physical space. Having a ton of different spaces makes it tough to identify which is the “real” space in your track’s environment. Minimizing the number of reverb spaces also sounds much more natural, as the acoustic effects of multiple spaces would not occur simultaneously in the real world.

If you have multiple vocals in the same project (i.e. background vocals), it can be helpful to send them all to one reverb space. This prevents the sound of multiple spaces clashing with each other, maintaining a consistent space in which all of the vocals are played.

Using Neoverb’s blend pad, you can even combine different kinds of reverb to create the space you’d like your vocals to live in. 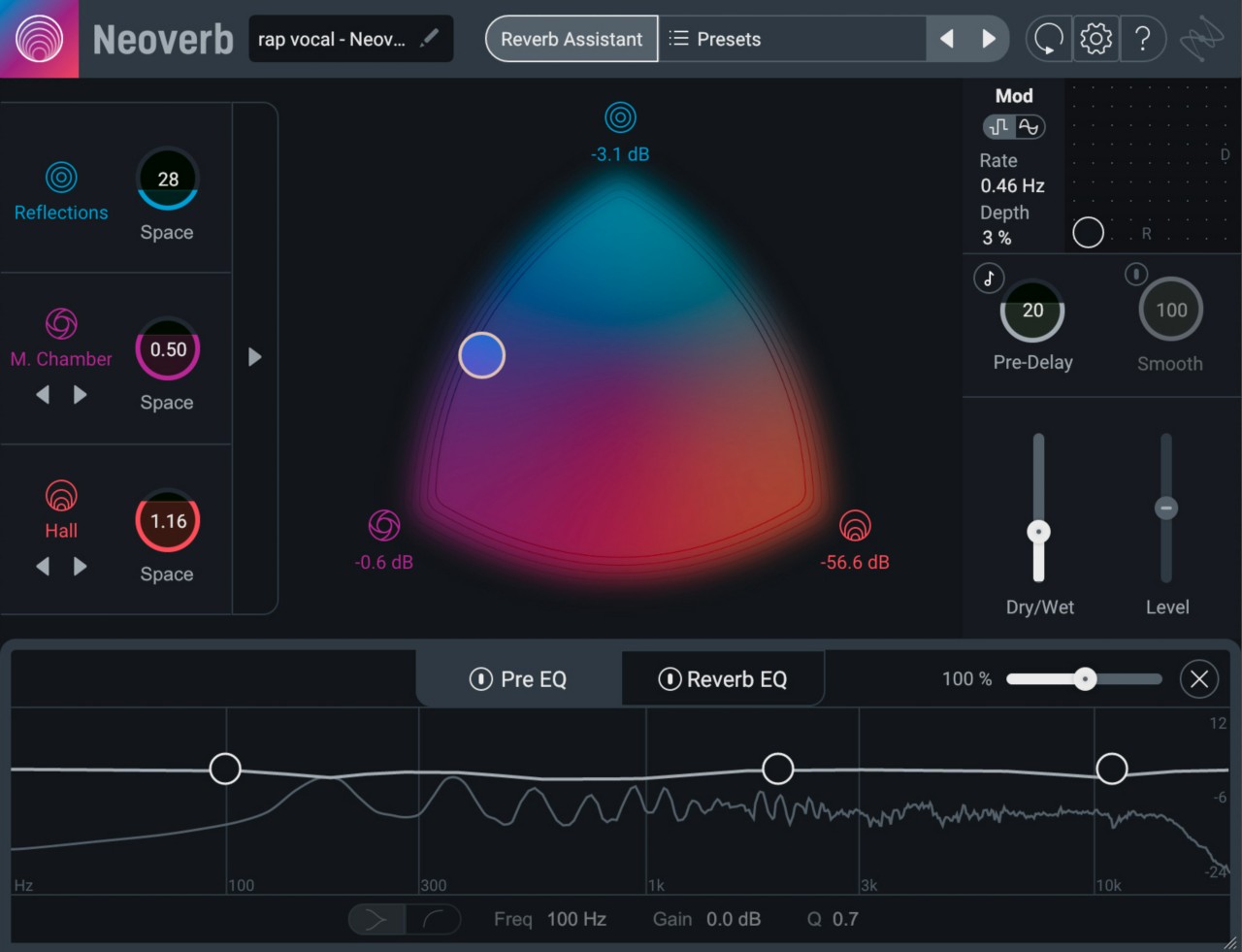 Let's take a look at some different spaces in Neoverb and why you might use them for your vocals.

Plate: A classic go-to for vocal reverb. Easy to make noticeable in a mix due to its often bright but smooth character with a bit of natural modulation. It’s metallic attack gives it a bit of extra pop that can be good or bad if you’re wanting it to blend in more.

Hall: Simulating a concert hall, it performs well with long tails because of its smooth decay and low modulation. A good choice if you want to make something sound at a distance, or keep your reverb sounding “natural.”

Room: This type of reverb creates spaces that often sound natural to the walls of the “room” you’re simulating. Useful for creating realistic but new environments for your vocal. If you’re just trying to find a “space” for your vocal, this might be a good starting point. Try using a very short length room when you want to add width and depth without adding a noticeable reverb trail.

Chamber: One of the earliest styles of artificial reverb, created by placing a speaker and microphone in a room capturing the characteristics of the room's exaggerated reflections by playing the audio back into the room. Oftentimes the chamber has an “echo-y” effect that places it somewhere in between the aforementioned reverb types.

If you’re still feeling stuck on deciding between reverb types, try some presets, or use Neoverb's Reverb Assistant and follow the prompts to help find something that suits your needs.

How long the reverb decays is its most noticeable parameter. Use a longer reverb for dreamier spaced-out sounds, and a shorter one for more “in your face” moments. You can try different reverb types and especially lengths for different parts of the song if it feels right. Changing “space” on Neoverb adds “time” and “size” to the reverb tail. Time and size can be controlled independently, and offer more flexibility to the sound of the decay. The Pre-Delay setting is also important. Giving the reverb a bit of pre-delay before it engages can help not cover up the vocal, and make new spaces. You can also get creative by timing it to certain note values.

The overall “space” as Neoverb puts it is totally subjective and in the eye of the beholder, but timing the vocal reverbs’ decay to the song can be helpful. For example, I’m working on a dramatic verse that has long spaces between the vocals. I’m going to let the reverb decay just about until the next phrase starts to really let each line hang. I’ve also decided to add 20ms of pre-delay to help the reverb separate slightly from the dry vocal.

Here’s a stripped down version of my mix to illustrate.

Stripped Down Mix with Reverb Decay on Vocals

Selecting the rhythm note next to the time on Neoverb can also be useful to time your reverb to the track. Experiment with different options depending on the mood and space you’re going for.

A tip I often share with folks is to try and experiment with panning your reverb. Narrowing the width of the stereo image will make the reverb effect sound more forward, regardless of its size and tone. Widening a reverb out to the sides will make it sound larger, but oftentimes also make it sound like it’s coming from the background.

For a lead vocal, I’m almost always tucking in the stereo image in to 75-50% to keep it wide but also more focused towards the center. A completely mono vocal reverb can also be cool for a retro vibe, or just for creating a lot of useful negative space in your mix.

A lot of ooo’s, aah’s, and vocal harmonies are almost sung with the intent to put reverb on them–they’re asking for sustain! And sometimes, a lot of it. That vocal stack might sound pretty cool with a lot of long plate or hall to give it an ethereal, dreamy, and larger than life quality.

If I’m sending lots of background vocals to a reverb, I’ll high pass the reverb substantially, making it nice and airy.

Let’s check out how that sounds in another stripped down version of my mix.

Start using reverb on your vocals

Adding reverb to vocals can be an interesting effect and help create a convincing sonic environment in a track. Using the above tips, you should be able to take advantage of these benefits while maintaining the clarity and presence that a vocal should have.

And if you haven’t already, demo iZotope Neoverb for free to experiment with all of the different reverb effects on your vocals.