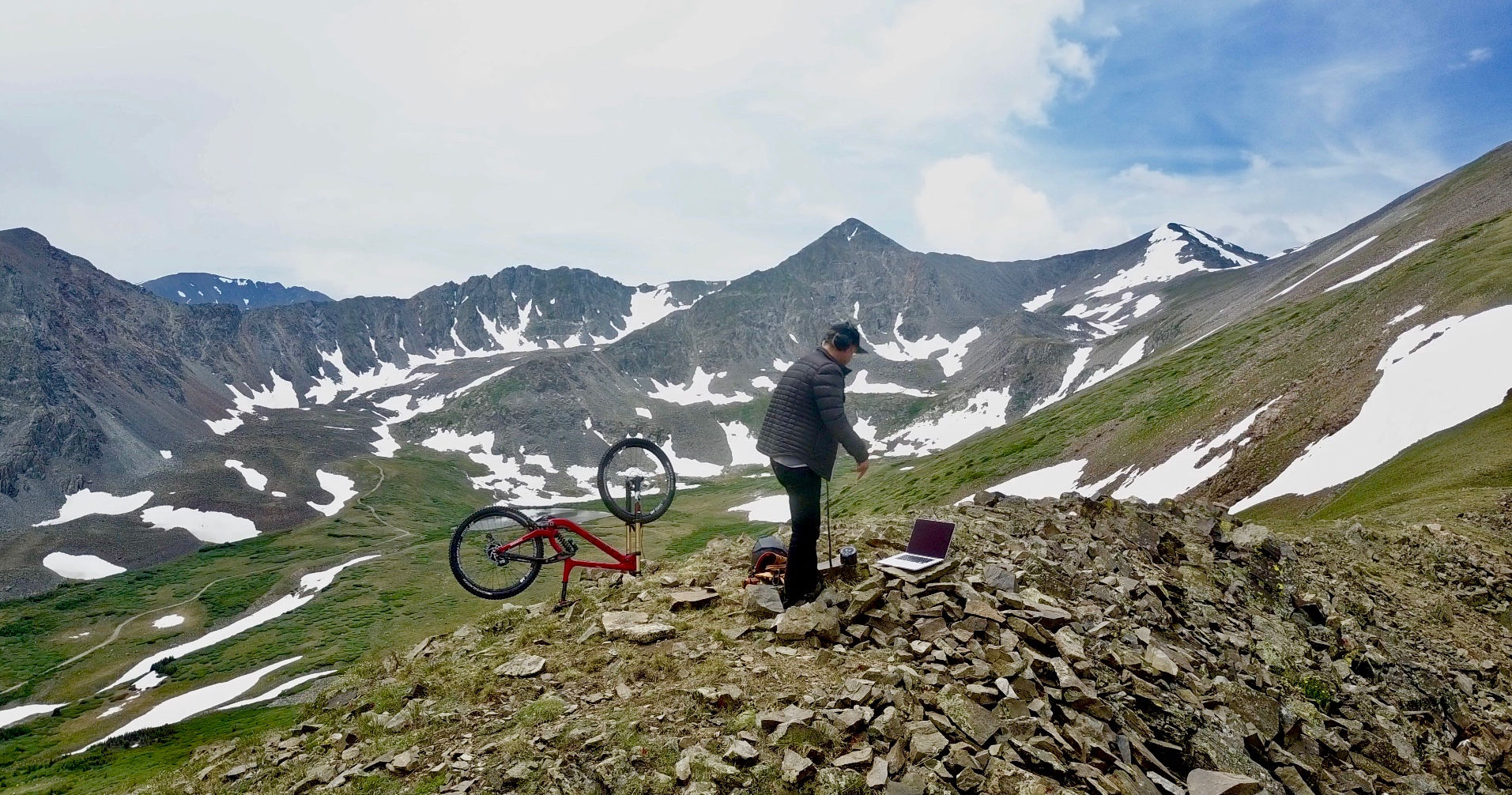 Imagine taking your three biggest passions in life and making a career out of them. Ross Lara, co-founder of Archipelago Entertainment—a digital media production company that combines music, adventure, and technology—has done just that. Their latest video features Ross recording a song with Spire—capturing chords from a baby grand piano in the living room of his home, but also audio samples from his surroundings as he mountain bikes down the Tenmile Range in Colorado (casual).

Recording this song on the side of a mountain would not have been possible had Ross just used his phone’s built-in recording functionality, which is what he had been relying on. “Now with Spire, I have a clean, full signal,” he says. “I can record efficiently and remotely with exceptional quality.”

Check out the video of Ross taking Spire for a ride, and read the full interview below.

“From the highest point of the video, we were not far from civilization, yet in total solitude and isolation.” —Ross Lara, co-founder of Archipelago Entertainment

Why did you found Archipelago Entertainment?

Brian and I founded Archipelago Entertainment when we were ready for the next chapter in our own careers. I was full time in music and he was in the corporate world. We knew we wanted to start a music company, but making it unique would be the challenge. Then it dawned on us: Our core principles were to intertwine music, adventure, and technology.

Rarely, if ever, do we see these three industries in total harmony. We have a thirst for adventure and love for making music. We need awesome technology to help us do that.

These are the core values that inspired Studio E, a division under Archipelago. We have our eyes and ears set on locations and projects all around the world, to raise awareness, to educate, to revolutionize the current creation process. We are going to partner with some of the strongest brands inside and outside of the music industry to get the message out there.

Why did you pick the Tenmile Range in Colorado for this video?

The Tenmile Range is a stunning set of mountains: ten peaks over ten miles, and the highest peak summits just shy 14,000 feet. For this video, we wanted to show that outside the walls of one's studio, there is a world to explore and that going on a journey can augment your inspiration.

From the highest point of the video, we were not far from civilization, yet in total solitude and isolation. The silence was golden, and the view I had while working on the track was unforgettable.

Ross Lara producing “Closer to the Sky” on the ridge of Peak 10, Tenmile Range, Colorado

What is the viewer seeing/hearing in the video?

The song “Closer to the Sky” was written a while back by my mentor, Todd Wright, Cassidy Ford, and me. We were stuck on a lyric, so we went to a mountain overlook with a guitar and finished the lyric while chipmunks were eating from our hands.

Fast forward years later and we were collecting outdoor sounds for this project. I had a super basic skeleton of a track that I took up on the mountain. I recorded dozens of sound sources. We also walked through the town of Breckenridge, where we stumbled upon a National Repertory Orchestra rehearsal. With all of these recordings, we did extensive sound design to get some sampled hits I could use to produce the song.

At 12,400 feet, we stumbled upon a cabin from the gold rush era. There were metal scrapes that we recorded to use for percussion. My foot hitting the bike pedal was the verse snare drum. The disk brakes on my bike originally produced an annoying rubbing sound, but after some Melodyne work and Trash 2, it was morphed into a tone to support the chords in the drop.

I’m an awful singer, but I managed to record a low octave take of the chorus on top of the mountain which was used to layer Adara’s vocal in the song. My favorite recording from the mountain was the bike spokes that anticipate the musical drop.

My favorite moment of the entire journey was being alone on the summit to work on the song. The film crew gave me peace and quiet. I had Logic X on my laptop, Spire Studio, and my headphones. I produced about 50 percent of the track on the ridge of Peak 10.

From what we hear in the song, what was recorded in Spire?

Our goal is for every sound to not be totally obvious. We don’t want an audience to feel like they are listening to something non-musical—the production is there to support the song. There’s a lot of sound design on the back end, which enables us to tastefully weave sounds into the track.

What advantages does being able to record music anywhere give you?

Spire will take my creativity and personal journeys to the next level. When I was young, if I wasn’t in the studio, I would be outside playing sports or exploring. Today, I can take my Spire with me anywhere. I feel like my mobile rig is now complete.

Just like acoustic instruments, having natural sounds from Earth brings a unique element to our company’s work. Maybe the audience won’t always hear it, but they will feel it. On the flip side of being outdoors, having Spire with me for all my studio sessions around the world will be the norm for me. It’s part of my workflow now!

Any tips you’d give others using Spire to record music outside?

Allow Spire to be part of your journey. Let your surroundings inspire you. Think outside the box. Spire will be by your side to capture all the great moments!

A special tip of the hat to Stephen Coleman who co-produced the track, our songwriters Todd and Cassidy, Adara, Sean O’halloran, and Devon Lancaster for bringing the vision alive, as well as Robbie, The NRO and Phil Tan.