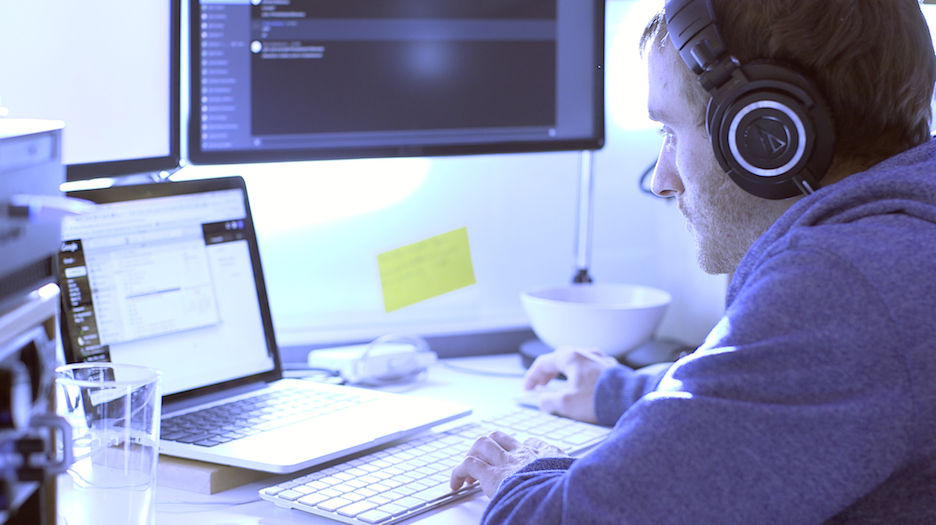 As a remote product specialist for iZotope based in Toronto, each trip to the Cambridge campus for a meeting or tutorial filming is both a delight and a humbling experience. Even though it’s my job to know a lot about our tools, I’m always fascinated by just how little I *actually* know about them!

It goes something like this: I’m out for beer with a developer or someone from the customer care team, and all of the sudden they reveal a game-changing workflow in RX I didn’t know about, or say, a technique in Neutron 2 I’d never think to use for sidechaining dialogue and music in a film trailer.

This post is a way for me to compile a few of the interesting ways iZotopians use the plug-ins we create. I hope you’ll learn something that gets you out of mixing/mastering rut or jumpstarts an idea for a new song!

“When playing my current favorite video game (Rainbow Six Siege) I run the Xbox audio through my computer and put Ozone and Neutron on it. I then run a few tests to get my settings right, in order to give myself a competitive advantage in the game. This involves running auto-set nodes in Neutron's EQ while a common sound effect (like gunfire) is playing, in order to set the nodes to decrease nasty resonance and enable me to compress the signal later without adversely increasing those resonances at the compressor

“I then put Ozone dynamics into M/S mode to increase and slightly compress the gain of the side channels, to make footsteps in the distance be audible sooner. This alerts me to enemy presence sooner than it would without this process. Make sure you’re not adding make up gain.

“Once I compress the sides a bit, I set the threshold for mid channel calibrated to gunshots. This is for communication reasons. This helps balance the sound of loud gunshots with the surrounding environmental cues, and also helps prevent the gunfire/explosion sounds from masking the dialog coming through the Xbox live party chat stream. In other words, I can continue to hear ‘call outs’ and communication from my teammates even when the surrounding environment is loud.

“After that, there's an EQ to roll off low end a bit, and make the high frequency spectrum more evenly distributed

“At the end is the Maximizer with threshold 0, ceiling -.8 and true peak limiting on to catch peaks/clipping/intersample peaks created in previous steps.”

“Hit the Suggest button and RX will find the optimal phase rotation to apply, then hit Process. This can sometimes lower peak levels by several dB without decreasing perceived loudness, thus giving you more headroom to work with.”

“I adore the Nectar presets. They’re so easy and they make everything sound very good, very quickly. When I have to throw a vocal on a channel or I’m sketching something out in a DAW, it sounds super professional right out of the gate.

“Also, I love the Visual Mixer in the Spire App. Being able to intuitively move tracks around and hear where they sit in the mix space is a really unique aspect of creating a demo with Spire that makes it sound professional and balanced. I can physically see and interact with the space of the mix.

“For me, the Deconstruct module in RX 6 offers a lot of creative possibilities. One cool trick I do involves rendering three different stems with the noisy, tonal, and transient components of a signal separated via Deconstruct. Once you have these three components, you can EQ, compress, and otherwise affect the individual signals however you like. This can be really useful for something like routing only transients to a reverb or delay, or putting a subtle low-pass filter on the noisy signal from a stereo master to reduce high frequencies on snares and hi-hats.

“Power tip: If you wanted to get super tweaky, you could even apply this process to a vocal and run only the tonal signal through VocalSynth for clearer enunciation (noise and transients being largely responsible for consonant sounds).”

"Two things: Firstly, I love Ambience Match in RX. It can be used to smooth over all kinds of inconsistencies in the noise floor of an audio recording. I use it in music production all the time. It's one of my secret weapons—it adds that extra 1% polish. It's especially useful if I need to brute force an edit (like, literally instead of trying to spectral repair out a noise, I'll apply an infinite gain reduction, and then use Ambience Match to re-fill the hole)

“And secondly: put Trash 2's compressor to 30:1 ratio. It's a special mode, if you will, that sounds like vintage gear we don't namedrop, but are inspired by."

“My tips revolve around Neutron 2 and Mix Tap. The Phase Invert button in both Mix Tap and Neutron is essential. After you make some EQ changes, try inverting the phase of the track to see how it fits into the mix, and always trust your ears when flipping the polarity. I use this on the kick and bass way before I try to use something like EQ or sidechain compression.

“While we’re on Mix Tap, I use the time delay unlink a lot. I delay one of the channels about 15 ms after I unlink them. This is a quick and dirty way to make something wide and out of way in the middle of the mix. Always check in mono when you're trying out stereo effects; don't go overboard with the delay as your ears will begin to notice which speaker is playing first. Your brain will then think it is just coming from that direction.”

“When I start a longer restoration project in RX, say I’m editing sound from a live theater performance, I open up the ‘Markers’ module and add 'to-do' markers (with notes to myself) about all the things that I know I need to go back and address. If I've gotten notes from someone else on issues that need addressing, I add those too. Then I export that marker file to a text file, so I have a record of my to-do list. As I go through the track and fix things, I update those items in the list to mark them as done (sometimes with notes as to what I did), and periodically export that updated marker file.

Then, at the end, I have a record of what I wanted to do, along with how I addressed each of those things, and can be sure that I didn't forget any notes I had for myself.