Make your own Glass Harmonica with a simple wine glass.

Make the world your instrument:

More producers than ever are setting up small studios at home, working to create music that stands out from the crowd. Unique music demands unique sounds, and the best way to get something no one else has is to record it yourself. Even ordinary items found around the house can create amazing sounds.

What do you do with these sounds once you’ve got them? Why, turn them into musical elements with Iris 2, of course! Sound design with home-recorded samples in Iris 2 is fun and easy, and in this article I’m going to walk you through some cool examples. So fire up Iris 2 and let’s get started!

Get Iris 2, Trash 2, and more creative plug-ins bundled with mixing and mastering plug-ins in our Black Friday sale—all for a limited time!

Start with sounds: our working examples

In my previous article, I described basic principles for choosing sounds to record. Aside from obvious sounds in your surroundings, striking an object can produce resonances for tonal content, and unique timbres can also come from the percussive sounds produced from very small objects (microsounds). Capture these with any mic—even a smartphone’s—and process them with plug-ins like DDLY, Mobius Filter, or VocalSynth 2 for amazing results!

For this article, I’m going to start with untreated sample recordings, using Iris 2 for any sound design that follows. We’ll present each one in its own section below: first on its own, then as used in Iris 2.

My original recordings were made with a now-discontinued tube small-diaphragm “pencil condenser” mic. For the new recordings, I used an excellent and affordable large-diaphragm condenser mic that’s great on everything from vocals and guitars to room miking, the Roswell Pro Audio Mini K47.

First up: a rubbed wine glass to create a pure, lingering tone that’s perfect for further processing. This is the principle behind the Glass Harmonica. You’ll need to hunt around to find a glass that will resonate well (uneven and cheap glass won’t resonate much, if at all). Fill the glass with water for a lower fundamental—I roughly tuned this one to a D. Iris 2 can auto-sense the pitch of incoming sounds, making mapping a cinch.

I also recorded doors opening and slamming for percussive sounds, and revisited the struck stainless-steel bowl from my last article, using an empty one for a purer tone. Just for fun, I held my Schecter A-5X, unplugged, up to the mic and captured the twang of each string.

As a final treat, there’s the sound of a phone being dropped and bouncing off an equipment rack before landing on a hard floor. This was a happy accident caught by the mic, and when I listened to it I was thrilled to hear that it actually created a rhythm with a tuning that was consistent with itself, meaning it could be used in its original state or pitch-shifted.

With these samples in hand, it’s time to get to work! 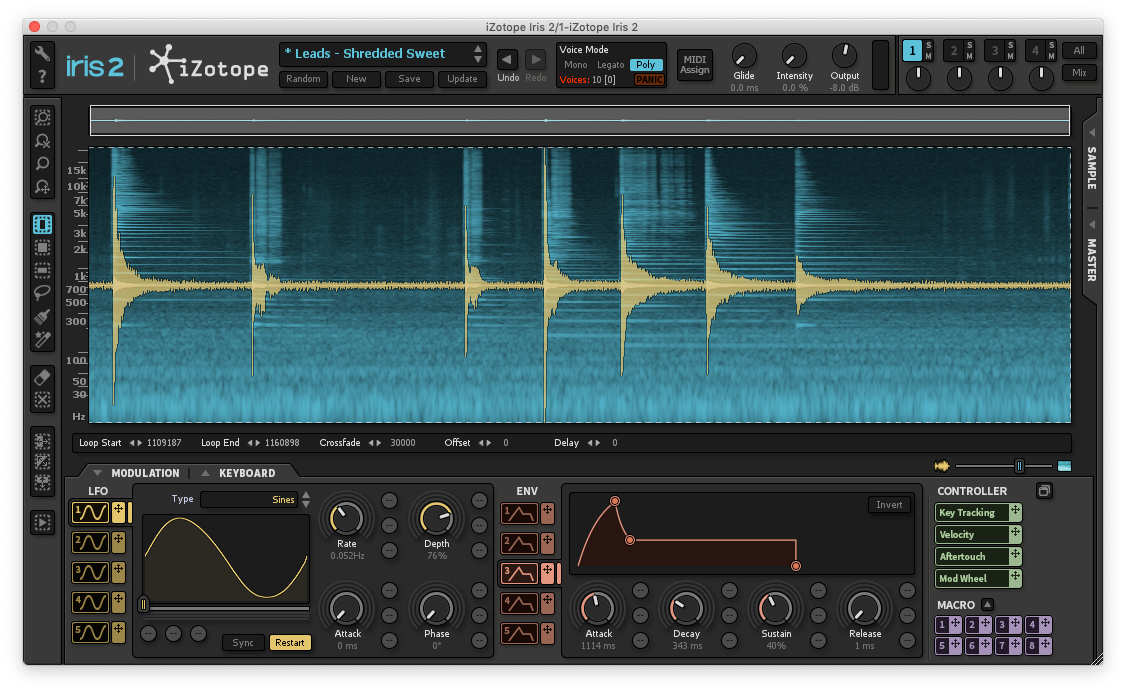 The plucked strings, with all five strings plucked in order at the end, low to high

1. Plucking around with an unplugged electric guitar

The Schecter A-5X is a five-string baritone instrument that was made for only one year (2001). It is designed to be tuned in fifths like a cello, starting from a very low A or C. I tune mine symmetrically, AEBEA, letting me play conventional scales and melodies up high with fast open chords down low.

Of the above plucks, I chose the second-to-last, a clear ringing E with a fair bit of power.

Adding a sample to Iris 2 is as easy as dragging and dropping. You can also use the Browser to select samples. The Browser defaults to Iris 2’s huge sample library, but it’s easy to open your file system and find the sample you want.

Turning this sound into a playable lead is almost too easy. Iris 2 made a very good guess at the sample tuning, requiring only a tiny manual tweak to get everything to line up. I added chorus, a nice ping-pong delay, and a touch of reverb at the end. The E string pluck, isolated and cleaned up for less noise—note the tuning adjustment and effects.

Notice in the screenshot above that I have gone in and erased a bit of the high end using the Eraser Tool on the left. This didn’t hurt the sound when it was removed—you can hear it in the original sample as an annoying high-treble hiss.

Here’s the resulting sound in a short melodic phrase, and the Iris 2 patch for you to play with. I called it “Shredded Sweet” because it was originally going to be a shredded-fuzz sound; however, it ended up working well clean. If you want to try distorting it, Asymmetrical or Scream distortion will take it way over the top, while Tube and Saturation add some nice warmth.

Notice in the screenshot above that I have gone in and erased a bit of the high end using the Eraser Tool on the left. This didn’t hurt the sound when it was removed—you can hear it in the original sample as an annoying high-treble hiss.

Here’s the resulting sound in a short melodic phrase, and the Iris 2 patch for you to play with. I called it “Shredded Sweet” because it was originally going to be a shredded-fuzz sound; however, it ended up working well clean. If you want to try distorting it, Asymmetrical or Scream distortion will take it way over the top, while Tube and Saturation add some nice warmth. 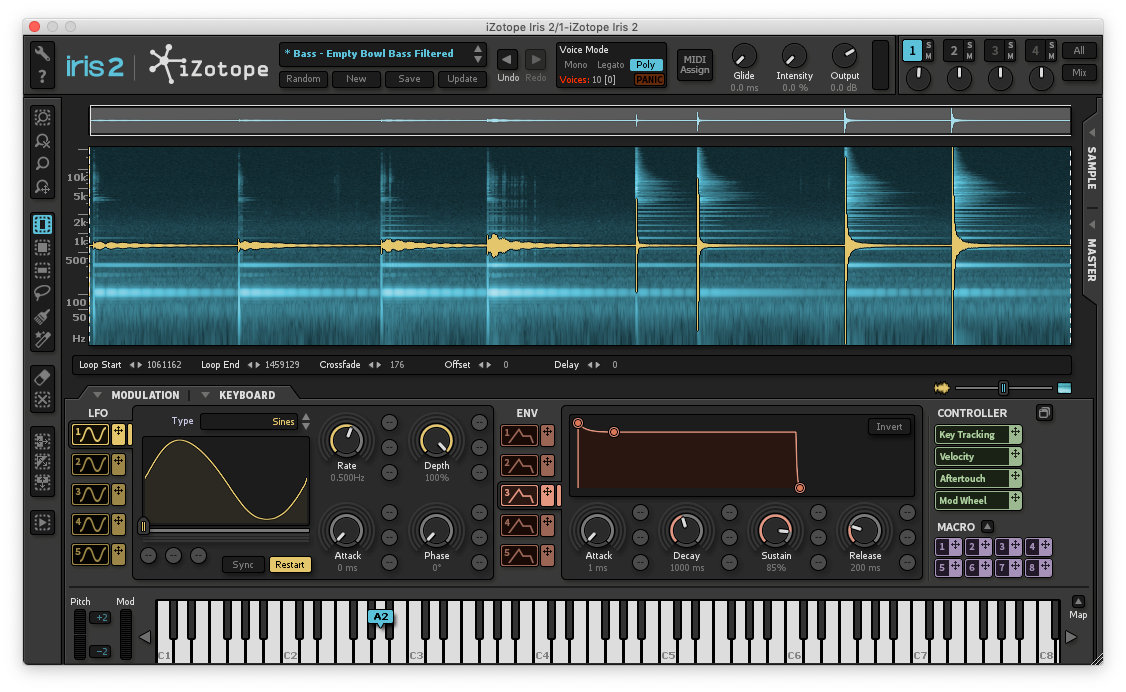 Several hits on the big bowl. The sharp ones to the right are too trebly; I chose the last soft strike.

2. From big bowl to booming bass

With a nice melody in hand, I moved to the other end of the arrangement. I guessed that with its deep sonorous tone, the large steel bowl would be a good starting point for a bass sound.

There are four soft strikes followed by four hard ones; the last soft strike has the most depth and character. However, there’s an issue! Take a look at the selected strike, followed by a closeup of the strike’s attack on a spectrogram: 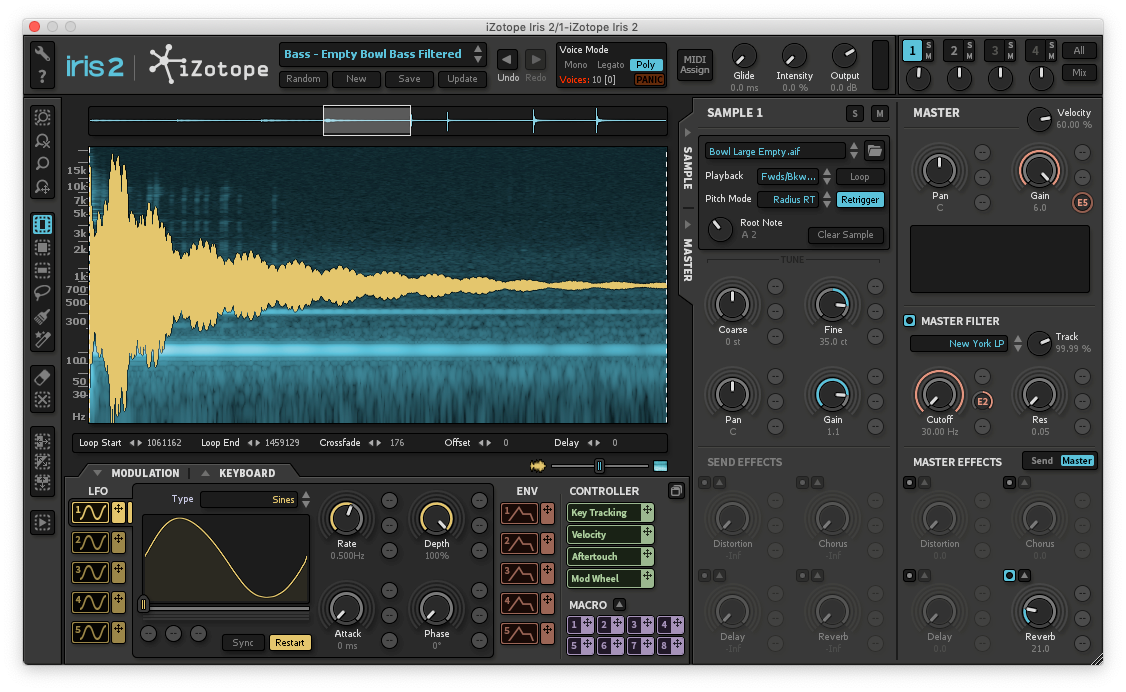 See the vertical spectrogram lines after the initial hit? Those need to go.

Where did these vertical lines in the spectrogram come from? The bowl had a moment where it resonated pulses of gritty buzz that got in the way of the smooth sound. There are a number of shortcuts that could get us past this problem: we could choose a different hit, which would lose some of the nice timbres we want, or we could put a lowpass filter on the whole sound, as shown in the first of the two screenshots above. Here’s an Iris 2 patch that takes that route.

That’s easy and sounds really good, but if we want to retain a bit more of the overall tone, it would be better to use the Eraser Tool and just paint out the nasty bits. This turns out to be a pretty significant job, with lots of fine painting around the harmonics we want to save: 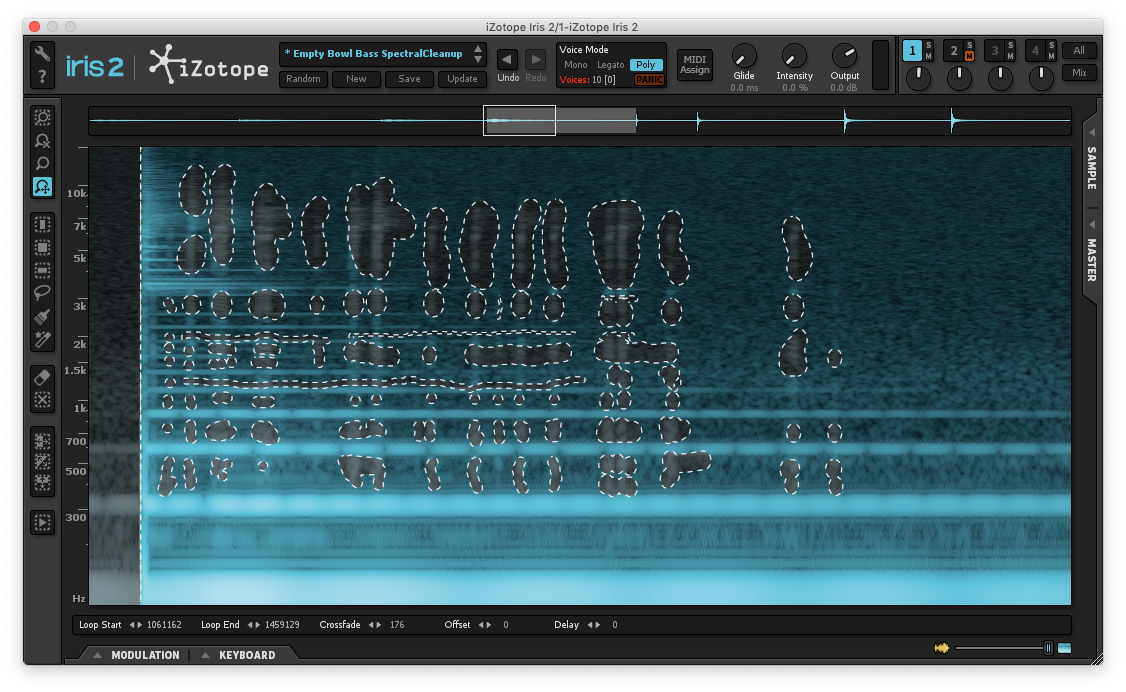 This produces a sound with just a trace of the buzz and a lot more harmonic character.

Just to reinforce the overall sound a bit, I layered the cleaned-up strike with a softer layer of the strike just before it, which lacked the nasty resonance:

The rest of the sound design was easy: no filter needed, just a touch of effects processing to round it out. Check out a simple bassline with the resulting patch, and try the patch itself.

The rest of the sound design was easy: no filter needed, just a touch of effects processing to round it out. Check out a simple bassline with the resulting patch, and try the patch itself. Crossfade looping does wonders for a smooth sound like a singing wine glass.

3. A nice glass gives us a nicely glassy pad

Now it’s time to make use of our wine glass recording. Our original recording was in three parts: a longer and more harsh note with some resonances from pressing too hard, a shorter and smoother note, and the dropped phone (plus a curse, removed). I kept the notes and saved the dropped phone for later.

Both of these have lovely tonal elements that I want to use. I loaded the samples into two of the four available sample slots in Iris 2, then processed each pair separately, with crossfade looping—see the screenshot above—to get nice, seamless sustain. Have a look: 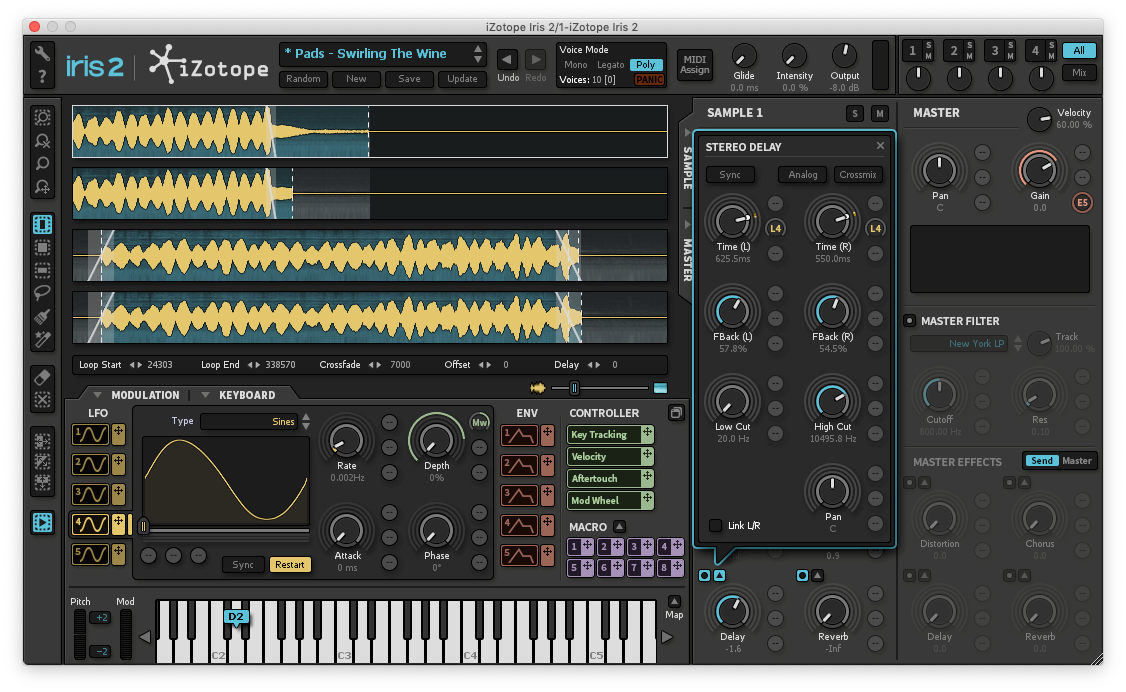 To get the swirling pad effect, I used a fairly tweaky ping-pong delay as shown above. There’s a tiny, and I mean tiny, amount of LFO 4 modulation applied to both delay times, with the LFO working left and right in opposite directions. This gives a huge sound that can very quickly get out of hand, so I mapped the LFO amount to the mod wheel for fine adjustment. Here’s a quick chordal sequence with the resulting sound, and the patch itself:

The last patch is quite straightforward. I just loaded two instances of the slammed door sample and isolated one slam and one open, and then loaded the dropped phone into a third.

While I used the excellent Radius RT pitch-shifting in Iris 2 for all other patches, for this one I mixed things up a bit, with Radius RT for the slam, and Resample for the open:

I kept fixed tuning for the dropped phone (looped and tuned in Ableton Live before importing, although I could have easily done this in Iris 2), which turned out to just sound wrong anywhere but at its original pitch. It could be played all the way through, or staccato for more snappy hits. 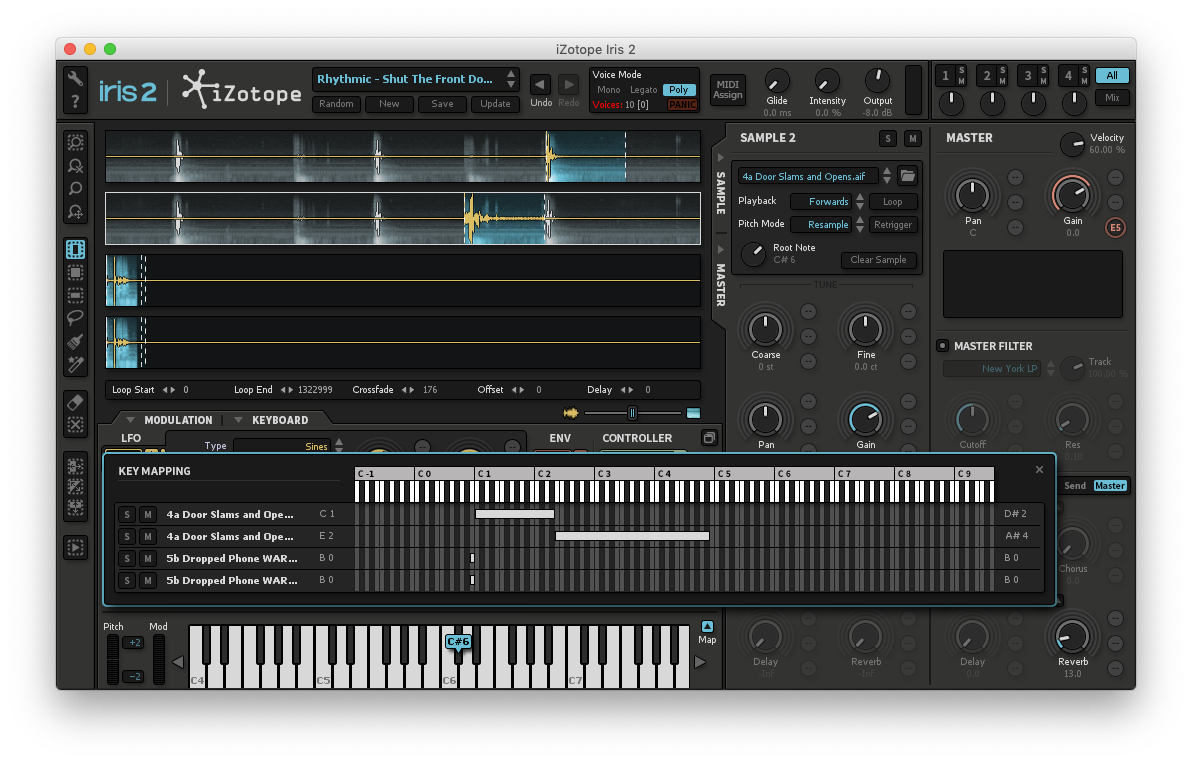 You can see the keymap for playing the patch in the screenshot above. I deliberately left the sounds raw, and added only a little reverb to finish my crude drum map. Try the patch yourself!

So we now have a drum part with several sounds, a nice round bass, a shimmery pad, and a clean melodic lead. Throw a bunch of Iris 2 instances into Ableton Live 10, stir vigorously, and out comes a short sequence that’s entirely original in sound content. I’ve deliberately presented it here with no added processing to the sounds. You can hear most of the parts as individual samples, presented previously in this article; here’s the whole thing as a rough mix.

Recording sounds at home is a blast, but hearing these sounds turned into music in your productions is even more fun. Sound design with home-recorded samples in Iris 2 is a bottomless well of creative ideas, so dive in and turn your home recordings into something truly unique and special.

Until next time: stay safe, stay well, and stay connected—and above all, have fun!