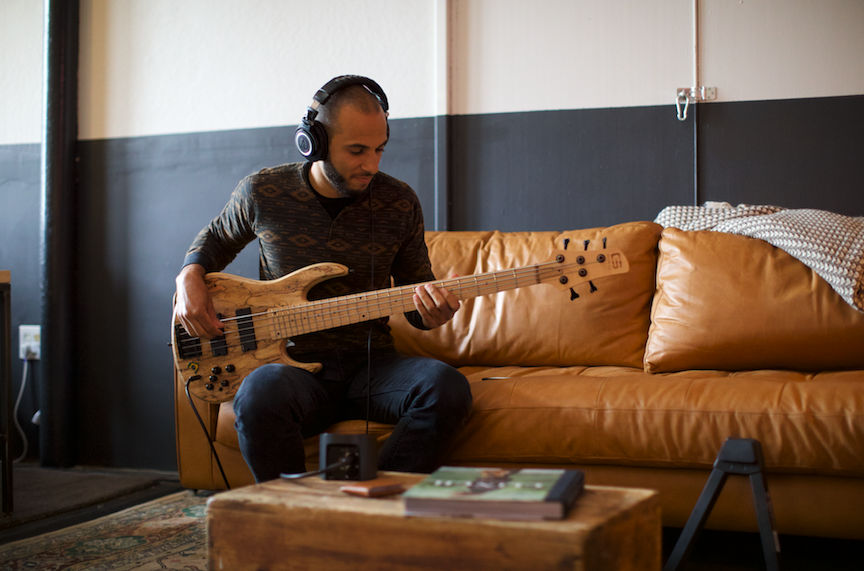 Using Foley for percussion and drums is a creative alternative or supplement to using drum machines and sample packs. Foley adds a texture to your music that you just can’t get from pre-made samples and loops. Environmental sounds also hold a lot of meaning. Think of rain, for example. For some people, the sound of rain reminds them of a relaxing day spent at home, while others feel down thinking of the overcast that comes with it.

Recording studio quality Foley is becoming easier to do with tools like Spire Studio. Powered by a four-hour rechargeable battery, you can record, edit, mix and share recordings on the go, without any cables.

Collect a few choice recordings, or make your own at home, then fire up your DAW. Just like using samples or synths, your sound sources should have an interesting character and tone.

Even if doesn’t make the final cut, starting a Foley-based project with a rhythmic loop, as opposed to a sample or recording, is recommended. It sets the foundation that you can build everything else around.

To give the shaker a bit of personality, I added an instance of VocalSynth. This plug-in can quickly transform a basic sound into something unique by adding glitchy, grayscale tones.

Then, I doubled the original shaker loop, pitched the copy 12 semitones down, and layered it with a metallic bit up top for extra detail.

With a base groove set, we can begin to add foley. Like this recording of bullets being dropped on the ground. Listen to it in full, then what it sounds like chopped and looped:

The hum you hear can be removed in a few ways. A high pass filter is one option, but when there is a lot of noise to be attenuated you risk removing the qualities that made the sound interesting in the first place. So, I used the year control on Vinyl instead and dialed it back to the 1930s, a time when low end and dynamics did not exist. This trick will remove the hum but keep the good stuff:

Then, I added an instance of Trash 2, a distortion toolkit, for some crackle. Listen to the whole percussion loop together:

We’re now hitting that sweet spot between familiar and weird—the rhythm is common, but the sounds used to put it together are not. This is a style mastered by producers like Four Tet, Burial and Jan Jelinek. They have all made Foley a big part of their production process. For example, instead of hi-hats, Burial often uses keys. Crackle, footsteps and rain regularly feature as well. It’s all part of building a unique sound world that invites the listener in.

To tie the loop together, I added some layered claps.

With the addition of a kick, originally a door knock, and a scratchy hi-hat sourced from the same shaker loop we started with, a clear pop and even disco feel becomes dominant. An acoustic bass-line really hammers this vibe home:

Trash 2 offers a ton of great distortion, overdrive and generally gnarly effects that transform your music. Foley is prone to imperfection, especially if it is sourced from open databases or recorded on your phone. Quality can be up and down, noise (like we heard earlier) is likely to be present, and other issues often arise. Sometimes these errors need to be fixed. But there are other cases where bringing these imperfections out instead of hiding them can yield unique results.

For example, the saturation from the Drum Machine preset brings out a lot of activity in the mid and high range, showing off a new perspective. The loop is warmer, louder, and more expressive.

With preset Growl with Tail, it sounds like vocals have been added in.

Foley percussion is becoming common in modern music production. As we produce more and more “in the box,” Foley keeps things sounding organic, fresh, and inspired. Finding a balance between taming the unpredictability of Foley recordings and just rolling with it often brings out the best. And of course, a whole lot of effects too.