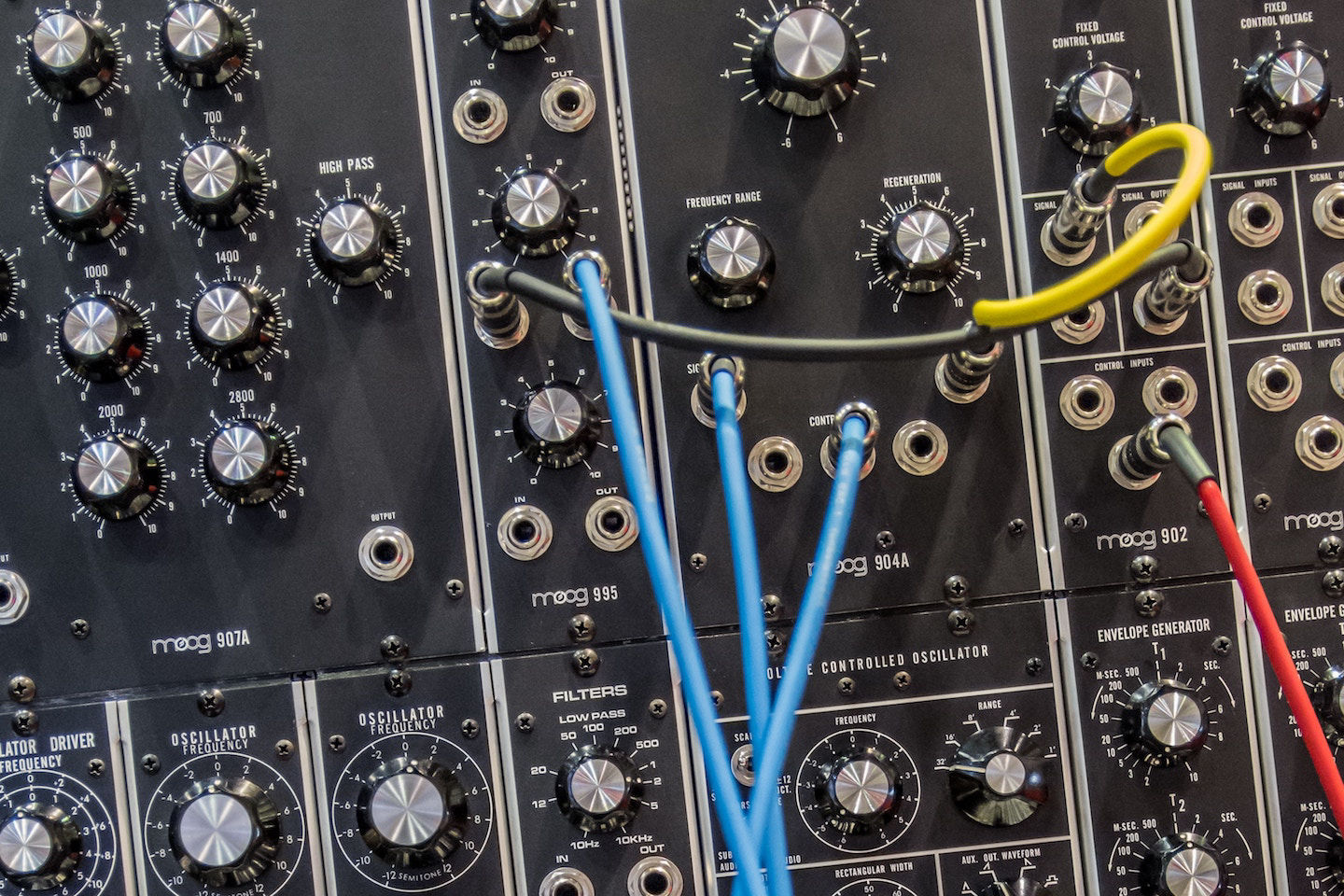 Through the first half 2018, some incredible music has dropped from newcomers, rising talents, and heavyweights alike, all dabbling in a vast array of sounds, and occasionally coming up with quite different takes on existing enres. Ambient techno, for instance, got two vastly different entries with Jon Hopkins’s recently releases Singularity, full of his typically brilliant electronic beats and textures, and Skee Mask (who we’ve covered before), whose Compro resurrected some of the 1990s early IDM sounds while updating them for the new century. Elsewhere, Nicolas Jaar dusted off his A.A.L (Against All Logic) project to release 2012–2017, a collection of sample-driven house tracks, while Emily A. Sprague released an album of modular synth music that is more than just technical bleeps and blops.

What we have below, however, are some lesser known cuts of fine electronic music. Granted, some artists, like Mark Pritchard (General Communication, Africa Hitech), Leon Vynehall, and Arp, are pretty well-known, but generally fly under most people’s radars, and therefore deserve some more recognition. Others on this list, such as SOPHIE, Space Africa, and 700 Bliss are just starting to carve their own paths in the expansive electronic music landscape, and deserve some special attention.

Leon Vynehall, 'Nothing Is Still'

Despite being an established name, Leon Vynehall isn’t exactly on the tips of electronic music fans’ tongues. But with his new album and multimedia project, Nothing Is Still, he definitely should be. Inspired by the passing of his grandfather, Nothing Is Still has its origins in a box of Polaroid photographs taken by Vynehall’s grandfather while he and his wife (UK citizens) were living in New York City from 1963 to 1969.

Ostensibly a soundtrack to a film that was never made, Nothing Is Still blends experimental electronic music with cinematic scoring, jazz elements, ambient, and modern classical music. Structurally it is built out of a novella that partially fictionalizes his grandparents’ immigrant story and turns it into musical journey all its own. It’s beautiful, complex, moving, and conceptually daring. And, best of all, it demands a degree of interaction and concentration that is hard to come by in these hyperactive digital times.

Boards of Canada’s entire oeuvre is probably the pinnacle of psychedelic electronic music, though of course artists like Air and Flying Lotus occupy other hallucinatory spaces. With the new album Zebra, Arp (aka, Alexis Georgopoulos) does his best to explore his own trippy sound, a near-genreless psychedelia that is hard to pin down influence-wise.

In often long, overlapping counterpunctual passages, Arp conjures sounds from Krautrock, tropicalia, jazz, world music, new wave (a la Talking Head circa Remain In Light), or Air-esque ambient pop. But here’s the thing about Zebra: these sonic amalgamations and conglomerations are so well-conceived and executed that it’s really pointless to linger upon influences. Just lose yourself in the swirls of sounds and rhythms—it doesn’t get much better than this.

SOPHIE, 'OIL OF EVERY PEARL’s UN-INSIDES'

The early notes of “It’s Okay to Cry,” the opening track off SOPHIE’s OIL OF EVERY PEARL’s UN-INSIDES don’t quite prepare the listener for the musical treat that awaits their eardrums. It’s a New Wave synth arpeggio that wouldn’t be out of place on a Madonna or Cyndi Lauper album, but things soon turn strange as far as pop and avant-garde music go.

On the next two tracks, “Pony Boy” and “Faceshopping,” SOPHIE unleashes the sound of pop music being warped, turned inside out, reconstituted, burned, and collaged back together. It’s like Oneohtrix Point Never and Arca producing a collaboration between Beyonce and Britney Spears. In a word, it’s insane. It shouldn’t work, but my god does it ever.

This stretching and blurring of pop and underground continues throughout the rest of the album. But SOPHIE’s finest moment on the LP might just be “Pretending,” a dark piece of ambient music that sounds like the noisier slices of shoegaze created by My Bloody Valentine and lovesliescrushing mixed with Vangelis’ Blade Runner score. It’s terrifying and gorgeous all at the same time.

For over two decades, Mark Pritchard has made some of the best electronic music, and done so by dabbling in multiple genres like ambient, techno, electro, hip-hop, grime, jungle, and footwork, to name a few. But on his last two releases, Under the Sun and The Four Worlds, Pritchard explores otherworldly spaces through melancholic, ethereal atmosphere and supreme technical detail.

The Four Worlds is unique in that it began life as a collaboration with Los Angeles–based visual artist and designer Jonathan Zawada. Originally a soundtrack for Zawada’s immersive installation of the same name, which explored looping virtual reality experiences of unreal alien environments mixed with real life details (like wind, touch, temperature), Pritchard and Warp Records released the music as an 8-track EP.

As an opener, “Glasspops” is deceptive. Pritchard constructs a slow-burn club track, but from here on out things get very experimental and textural. The track “Come Let Us,” a unsettlingly beautiful ambient track with a sample from experimental audio artist Gregory Whitehead’s Ziggurat (with text lifted from Genesis’ Tower of Babel tale), sounds like the last transmission of a technologically-advanced civilization that has snuffed itself out. But then Pritchard, eclectic chap that he is, throws the listener a curve ball with “The Arched World,” which at first sounds like it will be a bit of harpsichord-driven baroque music, but quickly mutates into something more like early electronic music.

Pritchard leans on the quasi-classical again with “Mên-an-Tol,” a track that sounds as if Tangerine Dream’s looping electronics met John Tavener’s ecstatic religious choral work. While only 33-minutes long, these aforementioned tracks and the others reveal a surprisingly deep and complex work of electronic music.

It’s hard to talk about 700 Bliss without the duo’s lyrical preoccupations, which are very much centered on the black experience, particularly in their home city of Philadelphia. On their debut EP, Spa 700, lyrics like  "Look ma, we made it… Only lost 100,000 coming over on them slave ships," which Moor Mother yells on the opening "Basic," are exceedingly powerful and demand attention. But the music itself, produced by Moor Mother and DJ Haram, is as striking as the lyrics and rap delivery.

On “Basic,” an atonal fiddle or violin is paired with percolating synth notes, deep, growling bass notes, and a spare beat. A short track, but a memorable one, “Basic” somehow manages to blend hip-hop, industrial, noise, and club music. This vibe continues with the rest of the EP, with songs like “Cosmic Slop” and “Scully” again harnessing both and dance club rhythms for a strange sonic brew that sounds new and vital

The opening notes of “uwëm/creātiōn,” off of Manchester duo Space Afrika’s Somewhere Decent to Live, are beautiful swells of digital synthesizer atmosphere. And beneath this ambient tidal is a river of bass that recalls the type of spaced-out, cerebral brand of electronic music being made in the early to mid-1990s. Unlike a lot of electronic dance music producers, Space Afrika resist the compulsion to make tracks that are completely possessed by propulsive dance beats. Every time it sounds as if “uwëm/creātiōn” (and other songs) might tip over into a 4/4 dancefloor beat, Space Afrika pull the rhythm back and let the atmospherics breathe.

This gorgeous display of restraint is Space Afrika’s sonic template on Somewhere Decent to Live’s sound. In that sense, it shares much musical and textural DNA with artists like Global Communication (see: Mark Pritchard, mentioned above), Burial, and the far lesser known and now mysteriously vanished electronic artist Beaumont Hannant. In listening to it, one wonders how it is even possible that the Manchester duo dared release something so beautifully restrained, yet so full. Their record thumbs its nose at current trends, and shows us what electronic music was and can still be.