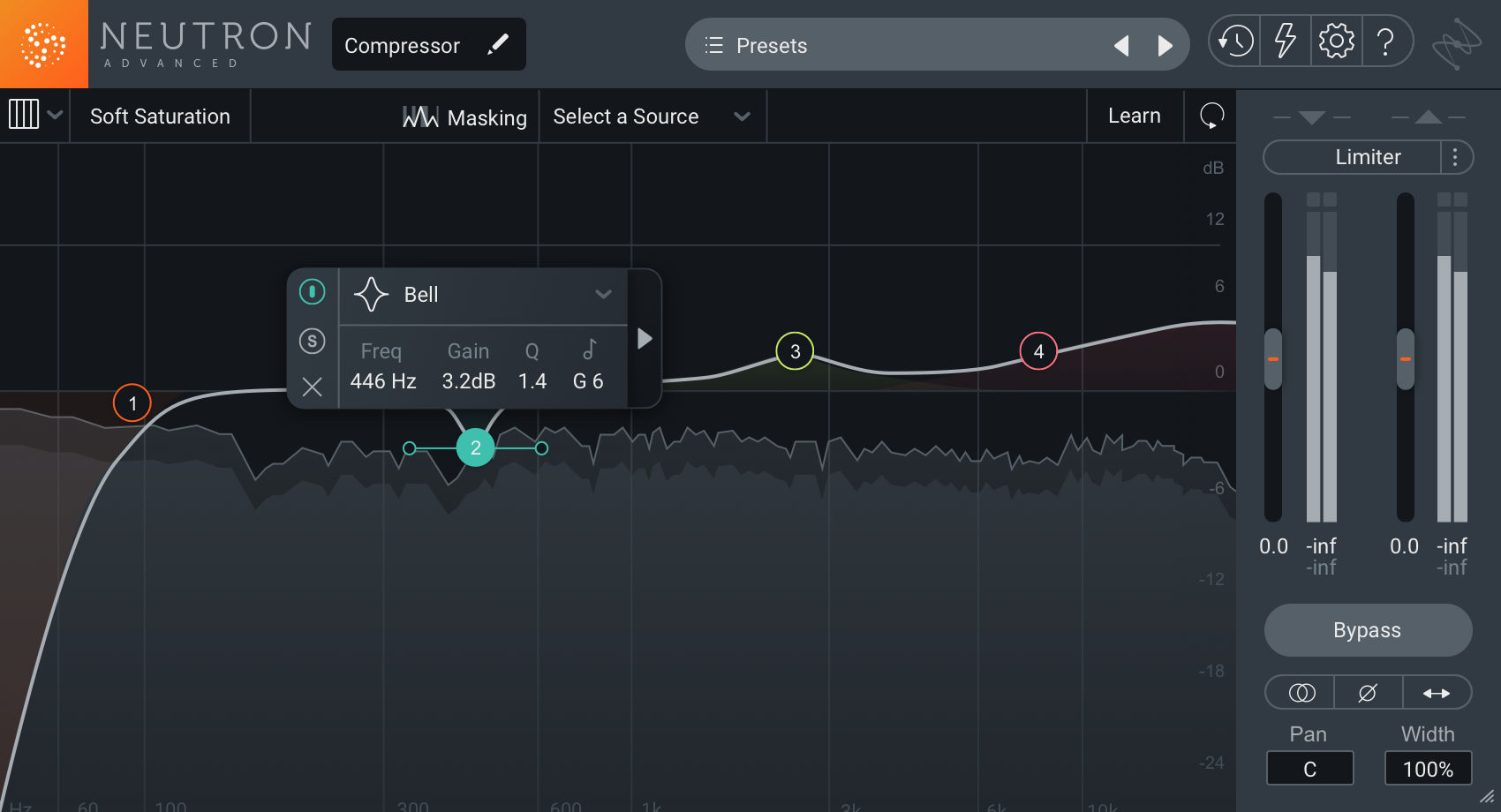 If you mix music, you know the struggle. Your clients want fast turnaround times so they can be effective with their budgets. If you’re working on your own music, you want to mix songs quickly so you can work on other tunes.

Fast mixes are impeded by time-wasting activities; EQing can easily fall in that category. Much of a mixing engineer’s life is spent EQing. Some of that time is well spent, but much of it, especially early on in one’s development, is wasted on unnecessary or counterproductive changes and aimless wandering through endless combinations of gain, frequency, and bandwidth. One of the worst feelings is investing 15 minutes into EQing a track, only to find it sounds better when bypassed.

If you can maximize your EQ efficiency, you can spend more time being creative, working on other songs, or spending time with friends who haven’t seen you since you retreated to your cave (studio) three months ago. What follows are tips gleaned from my own trials and the frustrations and successes I’ve witnessed in thousands of budding audio engineers from my time teaching at Conservatory of Recording Arts and Sciences.

One of the most frequent mistakes made by fresh and eager mixers is EQing without a determined destination. Picture a painter making focused, determined brushstrokes without any idea of what the painting is supposed to look like. That’s madness! It is crucial to establish goals for the song up front. Things like:

Setting these goals requires communication with the client and assistance from reference tracks. Some artists will provide a list of reference tracks, while others hate the idea of sounding like anybody else. The most important thing here is having tones in your head or in your music library that you can use as targets. Spending 15 minutes in pre-production with your client can save hours of wasted time twiddling EQs without purpose.

Check out iZotope’s Tonal Balance Control plug-in, which lets you create genre targets from one audio file or a folder of files. 2. Decide Where To Start and Set Priorities

Another all-too-common mistake I’ve seen is EQing track by track, starting with the first one and ending with the last one.

OH NOOOOOOOOO! It’s not a masterpiece; it’s a monster! Kill it! Kill it with fire!

You won’t get a cohesive mix with this method. Assuming that sonic goals have been set, it would be much better to assess the tracks and choose which ones are most critical to achieving your goals. For example, if the song is a vocal-driven ballad with minimal instrumentation, and you know the artist wants an upfront and intimate vocal sound, perhaps it’s best to get the vocal sound in the right territory first, then EQ other tracks as necessary to complement and fit with the vocal. Or, if the song is a rap track pushed primarily by the kick, bass, and snare, you focus on shaping them and making them strong together before you worry about hi-hats or high-pitched synths.

Once your priorities are set (e.g. vocals, drums and bass, piano, etc), you’ll have a task list to help keep you focused.

3. Don’t EQ Just Because You Can

However, it’s easy to get lost in the lust for your favorite gear and plug-ins. Next thing you know, you’re planning what EQs to put on each track just to satisfy your personal desires. “Oooh, I’ll put the Pultec on the kick, the Neve on the bass, the API on the snare top, my custom water-cooled tube EQ on the snare bottom, my 62-band notch filters on the toms, X-brand channel strips on all vocals, yes, Yes, YES!!!”

It’s good to know what EQs you like and why, but have some self-control.

Keep the goals and priorities at the forefront of your mind when choosing what to EQ and which EQs will actually help you. If that means you use no EQ on the piano, a basic 1-band EQ plug-in on the bass, and a 4-band dynamic EQ on the vocal, you do it. Looking at the images below, the 1-band EQ is obviously less daunting, but the 4-band EQ is clearly more versatile. Keep your wits about you when selecting your weapons. 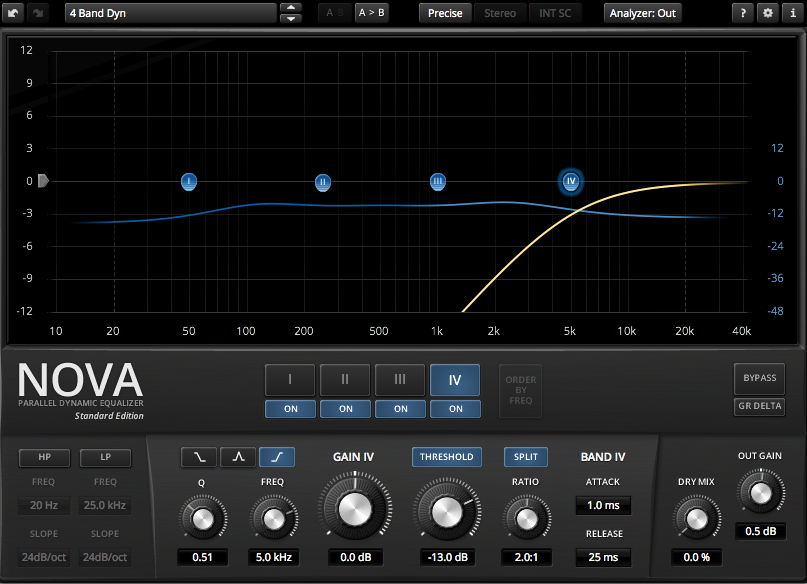 4. Don’t Overwhelm Yourself With Too Many Options

DAW newbies hear seasoned professionals and professional forum posters swearing by this EQ plug-in and that one. Naturally, they think, “Yeah! I gotta get that! Oh yeah, that one, too!” Before long, their plug-in collections look like an inventory lists for music retail companies. I’ve laughed more than a few times upon hearing someone say, “I’ve never used most of these. Heck, I don’t even know what half of them are,” while scrolling through an absolutely massive list of plug-ins.

It takes DAWs longer to launch when they have to scan loads of plug-ins, and it takes you longer to pick a plug-in when you have to wade through too many of them. So, to be more efficient with your mixing time, it’s okay to rely on a few trusty processors. (Consider investing in one that includes multiple, high quality mixing processors, like Neutron.)

Another party foul is casually trying different EQs in your arsenal just because you’re curious. It’s great to be interested in various EQs, but explore them on your own time, not on the client’s dime. There is a time and place for learning how to use your tools, but it’s typically not when you’re supposed to be mixing a song in a limited amount of time. If you’re caught up on your important to-do list and boredom is setting in, feel welcome to read manuals, watch tutorials, and play around with other processors.

Honing in on a few go-to EQs can keep you using your time effectively by utilizing appropriate tools for specific tasks. For example, find a tone EQ, a transparent EQ, a simple EQ, and a complex EQ with all the options you can think of.

A tone EQ is one that is designed to impart a specific character such as harmonic distortion; think about a tube EQ or a vintage console EQ, and you’ll be in the right territory. There are many plug-ins that model and simulate the traits of such marvelous gear. They can deliver unique coloration that other EQs won’t, even if set to the same settings.

A transparent EQ is one with the opposite design philosophy of a tone EQ. Transparent EQs are made to be colorless so they do not impart a specific character. They should only do what you tell them to do and not add anything extra. Some analog EQs and many digital EQs are designed this way.

A simple EQ is intended to be good at a few key things, but not offer a plethora of options. Picture a 3-band EQ with fixed bandwidths and just a small handful of selectable frequencies. Sure, it’s nothing fancy, but the advantage there is the minimal time it takes to configure it and move on.

A complex EQ should offer a bounty of adjustable settings. The core importance is that you can make such an EQ do pretty much whatever you want it to. It’s awesome to have that versatility, but the downside is the increase in time required to figure it all out!

Compare the EQs shown below. The first is a straightforward 3-band model, whereas the second is an 8-band luxury unit with all the amenities. Sometimes simple is good, but other times complexity is critical. 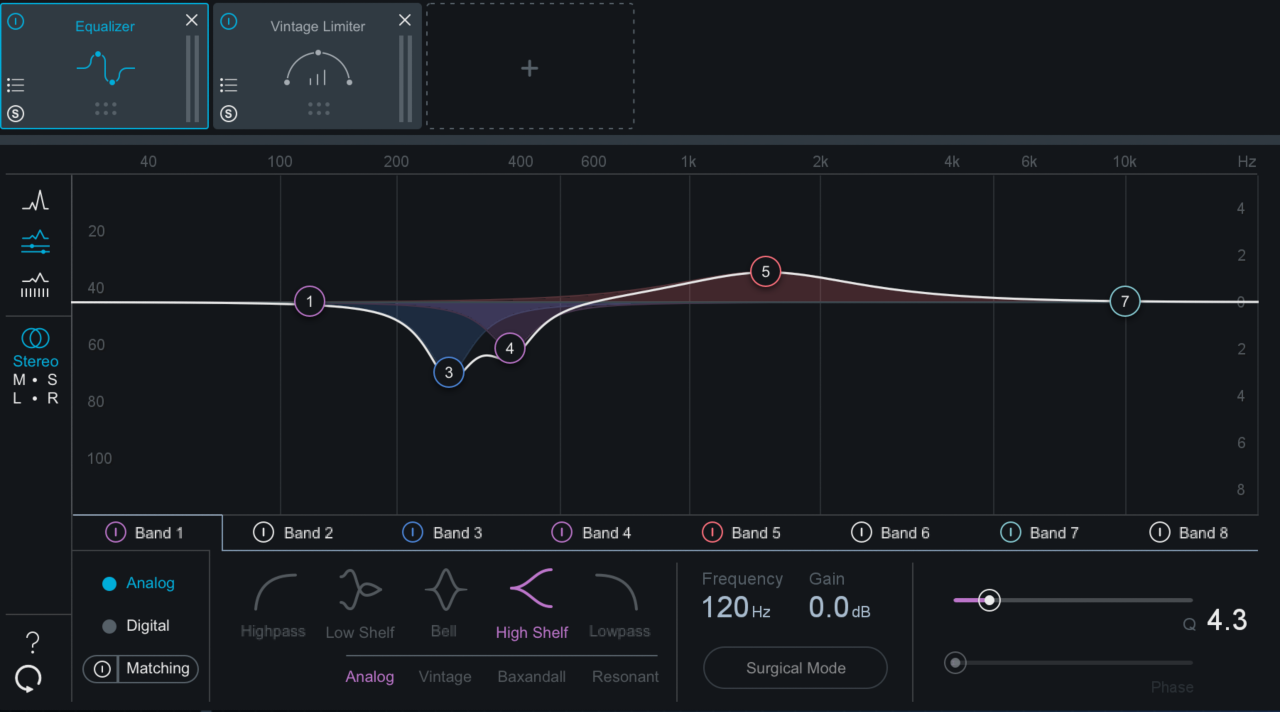 Ozone 8 EQ with all the Options

I have a special place in my heart for this one. What’s wrong with the picture below? You’ll notice that the snare top track is soloed, but it’s the snare bottom’s EQ that is open and being modified. This sort of problem (accidentally EQing the wrong track) seems to happen most often when people use the same EQ on a bunch of tracks. If you get caught in this trap, you can evaporate pools of time tweaking knobs, listening intently, and convincing yourself that you’re hearing a difference, only to face the crushing realization that it was all a lie. It’s an easy and costly mistake to make. So, before you go hard on all that EQ, just make sure it’s the right one. 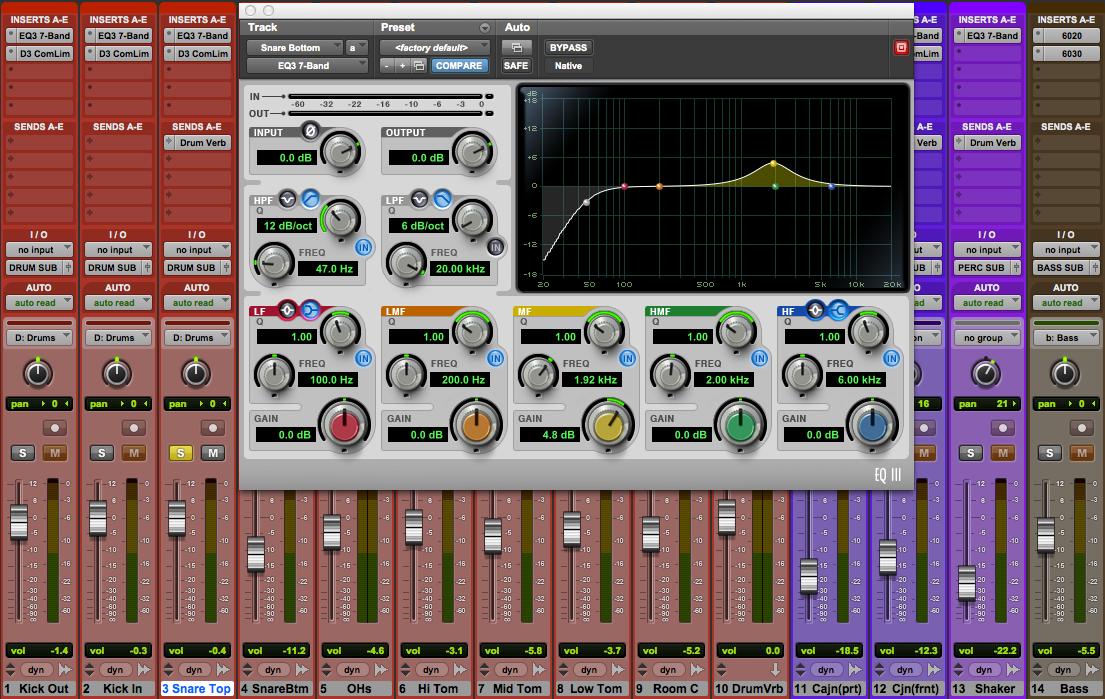 7. Toggle the Bypass with Your Eyes Closed

If you’ve spent several minutes focused on EQ changes, you might expect to hear a certain difference. This expectation can easily create a bias toward your settings. Try this blind A/B test:

You might even adopt this “blind” approach after you grab an EQ control. Grab the control, close your eyes, then adjust the control while you listen. It’s important to train yourself to listen without bias. I’m not saying that you should do this for the rest of your life, but at least give it a shot for awhile until your mind and ears are synchronized.

Getting your speed up requires repeated effort, but it’s not always about technical prowess. Sometimes the biggest impact can come from something non-technical like a change in your mindset. Whether it’s EQing tracks or building bridges, success is largely shaped by the presence of clear goals and priorities. Go forth and set them.

Need a hand getting started with your mix? Neutron’s Track Assistant lets you create a custom preset based on your audio to get you to a faster starting point so you can focus on what’s most important—your creative take on the mix.