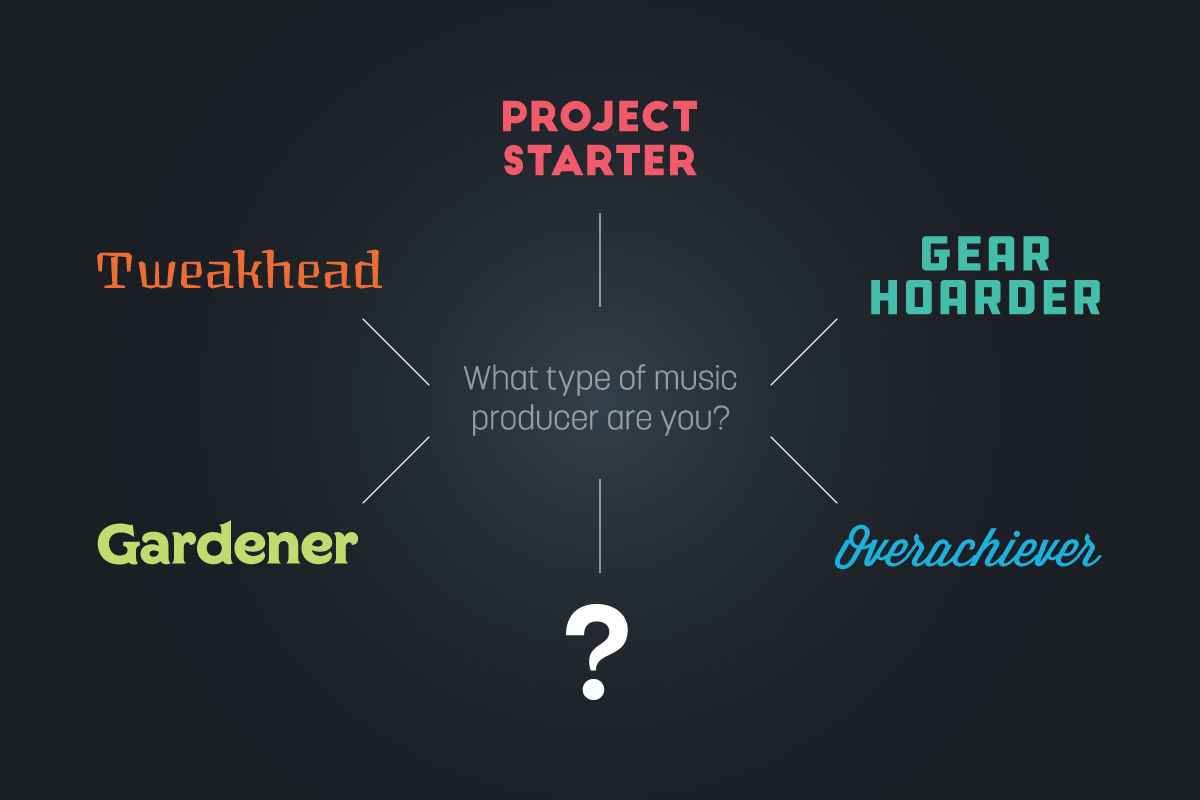 Music producers come in many forms. Whether you’re fooling around with Ableton Live on the weekend or you’re a seasoned mix engineer at a prestigious Hollywood studio, we’re all guilty of our own rituals and habits. Here are five of our employees’ struggles, habits, and production secrets.

Here’s how a typical creative session of mine typically goes...

I sit down at home studio, electric guitar in hand. I commence pursuit of the guitar sound that will forever change hearts and minds, like My Bloody Valentine in the late 80s. I pluck away at some broken chords I liked much more when I first came up with them. I open Logic X’s Amp Designer and play around for at least an hour, sampling every single amp and moving every knob to every imaginable position. Then I move on to plug-ins.

“No it was better without the distortion—no maybe just less distortion. Oh, I like this Happy Face Fuzz pedal, it’s so cute how it’s shaped like a smiley face OMG. No. This is starting to sound too much like Band X. Scrap the whole thing. I’m garbage.”

“Hey, you know what would be weird is if I played this through VocalSynth. LOLWUT. THIS. IS. SO. WILD.”

“That sounds pretty cool...but is it just cool in isolation or does it work in the context of the track?” I wonder as I stare off into space petting Bilbo The Cat, who has taken a spot on my keyboard. How do bands settle on one sound? Every time I find a cool one, I’m sick of it after hearing it for even a few measures and want to find something “better.”

“I can’t work like this; a hungry mind can’t be creative.”

I leave in pursuit of burrito.

If you look at my Logic Pro X projects, you’d see three folders. The first is titled “Finish Now,” and it has about nine tracks in it. It has hip-hop and electronic funk beats that I’ve labored over for months because there’s something about them that feels fresh enough to finish. These are almost done—a twist of a knob from getting bounced into the world.

The second folder is titled “Finish Later.” These are half-finished songs that I like and can’t bring myself to part with. Hey, maybe there’s a hit in there somewhere? It’s about twice as large as my “Finish Now” folder.

The last folder is appropriately titled “Finish Last.” This folder is filled with dozens of darlings I cannot kill, even though they’ll never see the light of day. Why delete when I can just buy a new hard drive?

Things I’m more likely to complete before I finish the beats in my “Finish Last” folder:

Not only have I been working on the same album for twenty years, but every song is called “Test” plus a number. So I have Test1, Test2, Test 3, etc., but they’re all different songs I started at some point.

As for why I never finish songs? I chalk it up to not having the right equipment. This is why I have six computers, ten guitars, hundreds of plug-ins, and zero completed songs.

One of the most important tips for young musicians and producers is to finish your work. Yes, your song can always be better, and you can spend hours, days, weeks, months or years trying to make it perfect. However, you learn less from your mistakes that way, and the more you spend on a project (after a certain time), that special something or creative energy that exists within the song dies.

I like to capture my inspiration, synthesize it, complete a project within a few days, and move on to the next. I will listen to old music and think, “What the hell was I thinking there?”, making notes of the mistake and then applying the knowledge to a new song I’m writing. It’s a good habit for me, helps with productivity, and makes me less attached to any one thing.

I start out by quickly creating a bunch of random ideas and sessions, mostly consisting of single melodies, beats, or other earworms. Later on (maybe a couple days, maybe a month, sometimes years later), I return to the old ideas with fresh ears, changing tempos, adding new elements, or altering existing ones.

After letting the seeds of my ideas “grow” on their own, I can later return to these simple sessions and quickly make them into complete arrangements. I may have to return to a track multiple times to let it grow to its full potential.

My typical harvest yields about one completed song for every ten or so idea seeds. It helps maintain productivity even when I’m wrestling with writer’s block.