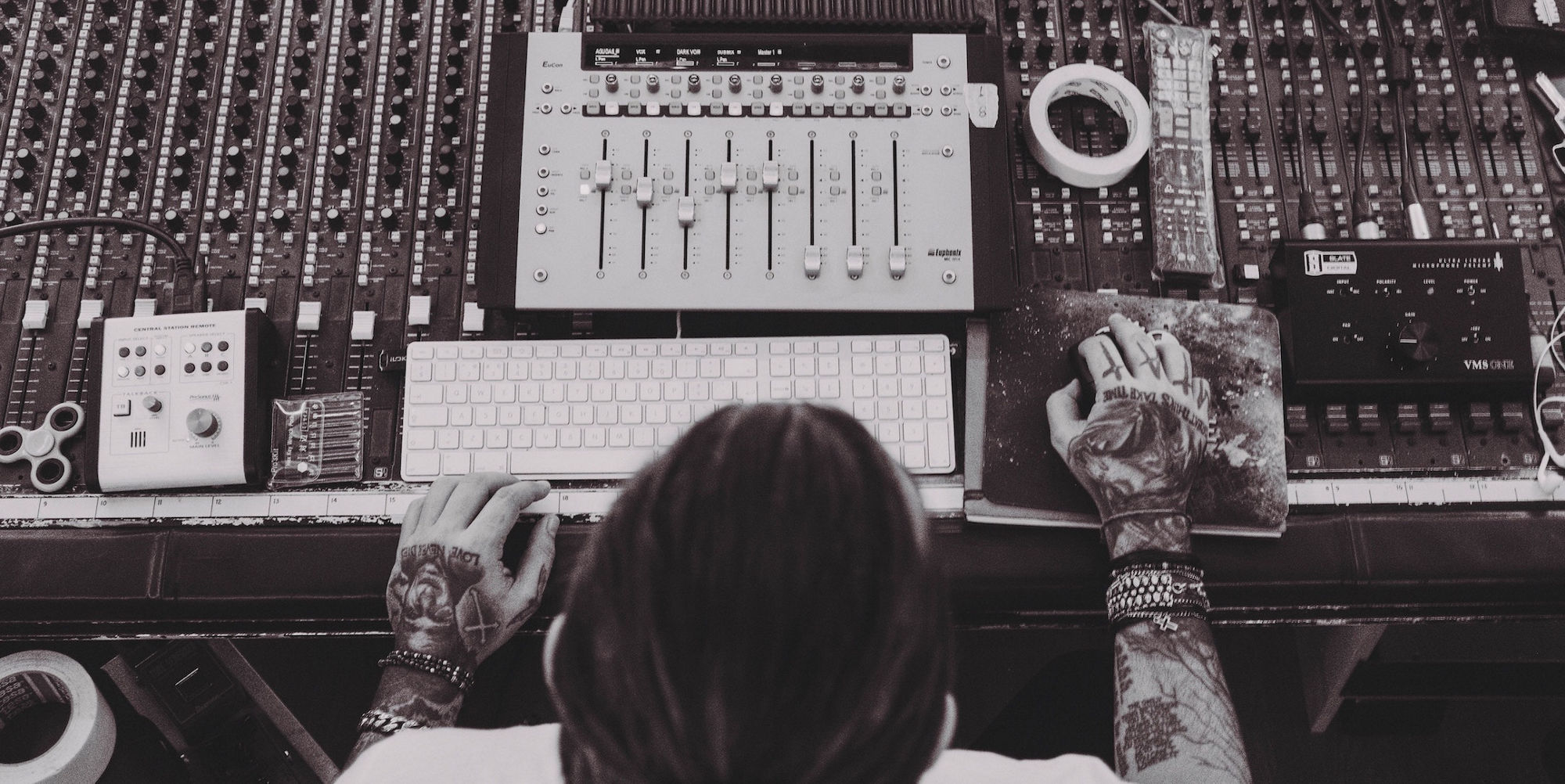 We here in the blogging section of iZotope are in the business of giving you tips and tricks for your mixes. These, right here, are tips and tricks for a specific end: pop mixing trends from 2018. We’re going to list what they are, and give you some idea of how to get there with iZotope plug-ins.

Notice that claps and snares are not as loud, bright, or pronounced as they were in previous years. Take “Without me” from Halsey for example: in both the verses and the chorus, the snare-element doesn’t so much crack on top of the beat as inform it. “thank u, next” by Ariana Grande, another current hit, has a snare pushed almost into the background; its reverb is nearly as prevalent as the snare itself during the verse. The same general approach can be noticed in “Beach House” by The Chainsmokers and more up-tempo fare like “Sweet but Psycho” by Ava Max; songs like these have claps/snares that seem to exist at a farther vantage point than their respective kick drums.

How to go about getting this sound with iZotope products is fairly easy: in a channel strip such as Neutron 2, ease up on the high end of your clap or snare sound. Don’t boost the trebles as much you would—show some restraint here. Maybe even use a high-shelf/low-pass filter, depending on the song. Be careful, however, not to extend too far down: we don’t want to lose the crack of the snare altogether.

For dynamics, parallel compression is always good, but you also might want to play around with Neutron’s Transient Shaper module, softening both attack and sustain for that muted, 2018 sound.

Whether we’re talking about the heavy low end of Travis Scott’s ZEZE, the driving synth-bass of “thank u, next,” or other tunes on charts and Spotify playlists, the low end in 2018 seems to be larger than ever—and so too does the midrange. It doesn’t feel so much like a scooped era, but a beefy one.

Also, a good deal of conflicting material has been filtered or tamped down to make room for the lows and low mids. Previously a balance would be struck, with notches and parametric boosts accentuating/smoothing out elements possibly conflicting with the bass. But these days, it feels like we’re hearing more shelves and more cuts than we are parametric solutions.

With a plug-in like Neutron 2, you have several options to achieve this drastic curtailment of everything save for the kick and bass element. The EQ section provides both surgical and musical slopes for the low shelves or high-pass filters. I’d shy away from dynamic EQs for this effect, because we aren’t seeing as much of a bounce between elements: a pad, instrument, or vocal doesn’t come back to its full sound when the kick isn’t present. You could, however, experiment with multiband compression in the dynamic section, making sure the low end is hovering far lower than everything else.

Here’s a good opportunity to remind you of Neutron’s Masking Meter, through which you can compare two elements and tweak them both at the same time. For more on these functions, check out our videos on the subject.

Something previously niche and indie has now made it into mainstream music. We’re beginning to see a more constant and thorough modulation of what used to be static instruments. Pianos, guitars, electric pianos, and other real-world tone generators are getting thrumming with filtering, phasing, and other fluid processes.

Think of the modulation on the pianos of “Without Me” and “Happier,” or the filtering of acoustic guitars on “Girls Like You” by Maroon 5. In these songs, real-world elements are manipulated in interesting, atmospheric ways.

It might remind you of the work Radiohead put into songs like “Codex” from 2011’s The King of Limbs and “Glass Eyes” from 2016’s A Moon Shaped Pool. There you could hear pianos being refracted and twisted in strange ways.

In these pop songs, the modulation may be a little different, but the principle is the same—modulations such as flanging, chorusing, bit-shifting, and phasing are employed. These effects often run in parallel with the original sound. In turn, the sound is frequently darkened and relegated to the sides of the stereo spectrum.

How would this be accomplished in your DAW with an iZotope product? In addition to the hacking techniques MacGyver would be proud of, allow us to suggest a plug-in unconventional for instruments: Nectar 3. Its dimension module offers chorusing, flanging, and phasing, all intuitive to use and all of them offering an aesthetic in line with the current sound. Filtering can be achieved with one of the EQ modules. As a bonus, you can run both Dimension and EQ in parallel. Use automation of rate, depth, spread, and other variables for a constantly fluid sound.

I’m hearing more artifacts in the vocal than before. Are you? If so, here’s another question: Can we chalk this up to the popular, bedroom production SoundCloud rappers—or has it really been a long time coming? I think it’s the latter. Indeed, glitches and artifacts have been increasingly acceptable in the vocals of popular mixes. These can be a result of tracking straight through Auto-Tune for effect, among other issues.

Don’t believe me? Check out the vocals “Happy Now” around the 44-second mark, or the choruses of “Beach House” (“darling of mine” right before the drop). Listen to the 28 or 29-second mark of BAD! from XXXTentacion. For a fun exercise, pick a pop vocal from 2018 and compare it to a pop vocal from three, four, or five years ago, and tell me if you notice a difference.

Maybe it’s an artifact, or maybe it’s a washy sound that takes away from the luster—something like the fizzy effect of a lossy MP3, or the glitchiness of an auto-tuned hiccup not treated. I’ll bet you’ll notice some interesting results if you conduct the test at random.

One could theorize about how much of this is unintentional, and conversely, how much of it is intentionally aping the unintentional. A cultural fascination with SoundCloud rappers could have led big-budget producers to craft “rougher” results for apparent authenticity.

That’s something for the music critics to decide. For you, in your productions, the presence of artifacts in the vocal holds a different meaning: it’s providing you a brief moment of leeway, where a glitch is forgivable. My instincts tell me it won’t last long.

Here’s another exercise for you: Look up popular songs from right now and play them at random. If they’re from an established artist, compare the songs to entries earlier in their catalogues. I’ll wager you’ll hear an all-around darker sound in many, if not most instances. This isn’t just the bigger bass we talked about before—this is also a marked decline in brightness. Let’s show some back to back examples, one artist at a time.

Ariana Grande: "thank u, next" vs. "Problem"

Drake: "In My Feelings" vs. "Hotline Bling"

Starting with Drake: Listen to the difference in hi-hat elements between the two songs, and that’s where you can really hear the dramatic difference. With Maroon 5, listen to the supporting harmonic instruments—the pads and guitars—and contrast them to what’s carrying the support in “Moves Like Jagger” (they’re buzzier and brighter in the latter song). Granted, the feels are completely different, but that’s also part of what we’ve established in 2018 songwriting trends.

Ariana Grande’s “Problem” evinces a thinner mix compared to “thank u, next”, and when the 808 kick does come in, it’s all scooped; we lose the low midrange prevalent in today’s track. As for Charli, the chunkiness of “1999”’s synths is startling next to the mixing style of famous, which doesn’t extend as low, and doesn’t feel as scooped.

It should also be noted that others have contributed to the darker pop mixing stylings—others who don’t have a back catalogue for comparison. So when we look at the mix of “BAD!”, with its swimming, swirling, and downtrodden pads, all of it beckoning us into an Ambien-laced laced circus tent, we can see the spearhead of a movement that is pushing pop music into sonically darker and darker territories, seemingly in real time.

What does this mean for you? You can get away with more in the lows and midrange. However, you can’t pay less attention to your high-end. It means, if anything, you have to pay more attention. You still need to lavish attention on the most forward element that will receive the sparkly treatment—usually the vocal—and you must do careful, judicious work to relegate the relatively muted snares/claps, big basses, punchy kicks, and swimming harmonic elements to their respective corners, all without obscuring each other.

Pay judicious attention to the stereo spread of instruments, making sure that when a modulation floats from the left to the right, it doesn’t muddy up the center vocal, bass, or kick. Try tools such as the Masking Meter in Neutron 2 and—and also Nectar 3’s Unmask function—to make sure elements like the vocal retain their luster. Track elements against each other in Insight 2’s Spectrogram. And above all, use your ears to carve out space.

There are surely other pop mixing trends we could highlight—off the top of my head, harmonic instruments seem to be not only darker, but given extreme stereophonic treatment, right up to the point of mono incompatibility. We only have so much space however, so these are the ones we’ve chosen. Some of them are exciting to me—I love the low end and stereo treatment we see today. Others, less so (I’m looking at you, artifacts). But regardless, this is our jumping off point for 2019. So, mixers—go forth and mix!