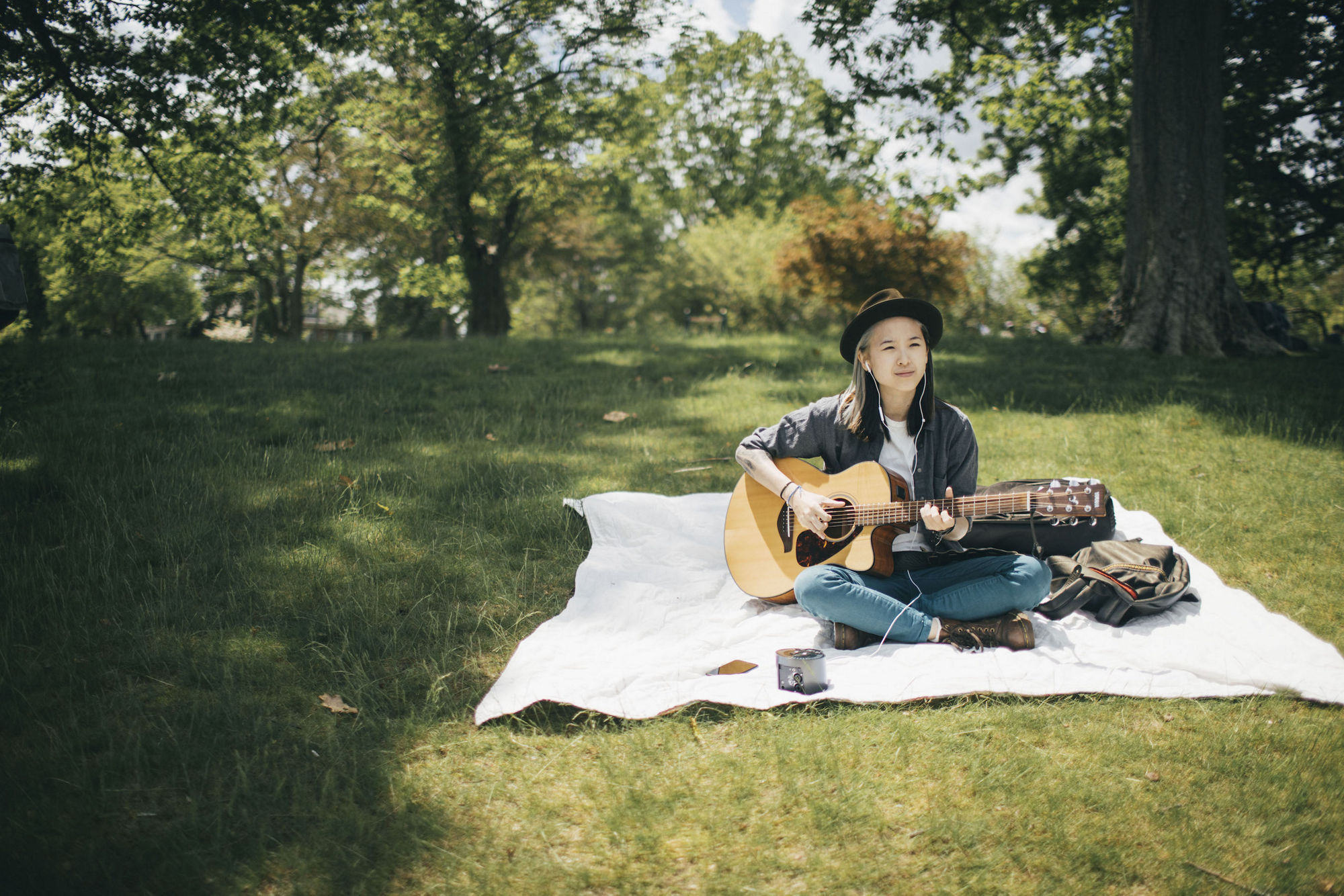 Recording music shouldn’t be complicated. In this ongoing series, Recording—Simplified—we’re asking musicians to offer their tips for simplifying the recording process. We talked to Paper Citizen’s Claire Goh (indie rocker and star of the Spire video below!) to share her thoughts on songwriting and recording.

“Spire is very cool. What I love about it is that it not only sounds great, it's compact and completely wireless.” —Claire Goh, Paper Citizen

What is Paper Citizen’s songwriting process like? How do you and the band develop song ideas?

It starts off with just me—I usually bring in a song idea to a rehearsal; more often an incomplete song with some lyrics, or sometimes even just a chord progression that I’ve been playing for a little while. It then usually calls for something more collaborative to really fill out all the frequencies. Sometimes I make demos on my laptop and send it to the band so that they can come up with ideas in their own time. I like it a lot when we all meet and jam, hearing them play what they feel like in the moment, and just getting used to a new idea together. Over time we collect more ideas that we develop, filter, dissect, and repeat. Some stick and some don’t, and it eventually shapes up! I love how their interpretation and creativity add to the overall sound.

Where do you write your songs? Does location affect your songwriting, and if so, how?

Mostly indoors, I’d say at home, or somewhere where I can feel like I’m alone and not self-conscious, especially during the early songwriting stages.

I’d say location definitely does affect my writing in terms of creativity and also mood—I moved into a basement apartment last fall and I’d say the songs have turned out a little gloomier than when I lived in an apartment with windows...

Tell me about your song "Anywhere We Want To" that’s featured in the Spire video.

It came from playing a couple of chords that I liked, over and over again. I wanted to see what I could come up with because its simplicity felt good to me. I had also just fallen in love at the time (which might explain why everything felt good to me in the moment), so writing the lyrics seemed to come quite naturally. I was feeling the excitement of meeting someone I couldn’t stop thinking about.

What decisions went into composing and arranging it the way you did?

I consciously wanted to write a chord progression that was simple, steady, bright, and made me feel like I had a spring in my step. So I took the chords and added some Travis Picking to create that musical “bed” for this tune. The melody was a development of the chord progression: light, almost dreamy, just like how I feel about falling in love. The arrangement stuck quite closely to the instrumentation of the band as we perform live—guitars, keys, bass, and drums. I also added harmonies and background vocals, which is an element that I love adding in the style of music that I write. Lastly, when making these decisions, I’m usually asking myself, “Does it feel right for this song? If yes, then it could work!”

What was the process like recording "Anywhere We Want To" with Spire? What were your overall impressions? Did anything surprise you about the app or the hardware?

Spire is very cool. What I love about it is that it not only sounds great, it's compact and completely wireless. Your phone acts as the remote, as well as a simple DAW that will help you sort, mix and bounce your tracks.

It's such an easy way to build your song ideas on the go and start adding ideas and layers instantly. The app has a super intuitive way of mixing! It’s as convenient as drag and drop. It is surprising how simple it all is.

Can you see Spire fitting into your music-making process? If so, how?

Yes I certainly can, and I certainly want to! Making good sounding demos will be so much better for quality, convenience, and efficiency. The music I want to create tends to be collaborative, and sending tracks to my bandmates or producer is as simple as accessing my phone. I also tend to make use of multi-tracking, and this is like a portable, mini-studio that I can take with me everywhere I go.

For those of us songwriters and musicians out there who start many songs but never finish them, what tips would you have for finishing tunes? What works for you?

Listen to lots of music for inspiration. Find music that you like—it’s so easily accessible now. Listen to how they finish tunes—I have found that to work for me, I listen to songs that I love and break them down to how it was written, and I pay attention to their arrangement choices. Sometimes I imagine alternate endings for these songs, as if I had written them. Sometimes I simply marvel at the brilliance of the composition, listen in awe of the recording, and wonder how these songs were conceived!

What tips would you have to simplify the recording process, even if it's just for demos?

Start with what you have available! Your phone or your laptop already has at least one app that can perform audio recording. Record yourself. Make some sounds, play a few chords, loop them, reverse them, slow it down, speed it up, be in initial shock of what you actually sound like.

Download a few free apps and try each of them out. You’ll already start to discover the platforms you prefer to work with, and you’ll start developing a workflow. Online tutorials are great for troubleshooting, and especially helpful if you have a question in particular—going online can be overwhelming with information, unless you are specific on what you’re looking for. Try figuring things out on your own at first, after which you can always watch some online tutorials for inspiration.

What’s next for Paper Citizen? Any short-term or long-term goals you care to share?

Paper Citizen just released a single called “History!” It’s one of the first songs I ever wrote and recorded, so I’m glad that I’ve finally gotten around to putting it out.

I’m also presently working with my friend, fellow engineer/producer Colin Fleming on Paper Citizen’s next five-track EP. It’s going to be titled Distraction (you’re the first to know!) and I’m hoping to combine more modern studio production elements in this record. We’re taking our time with it, giving ourselves some time to be patient with the creative process. I’m trying to venture into the visual side of music too, and I hope to be shooting the first music video in a couple of months. I’d say that the album’s been shaping up really nicely. If all goes well I’m hoping to release it by the start of next year!

In the long run I hope to be able to realize a brand with the music that I create—writing music people want to listen to and make memories with. I try to write and capture music that makes me feel something, be it heartfelt, angry, thought provoking, chilled out, all the different emotions that we feel in a day. I hope it will translate for my audience too. I want to be a rockstar, giving women confidence and inspiration that they can succeed as well as their male counterparts in whatever they do.