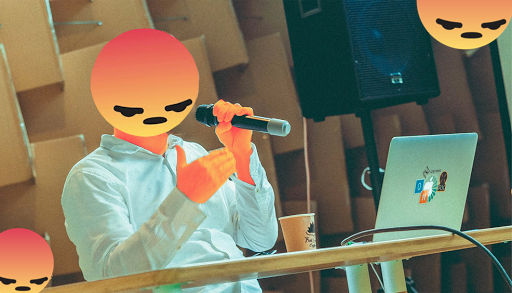 A lot of people are constantly asking me, “iZotope Meme God, what do you do for work?”* When I explain to them that several times a week I get paid to make memes, they react with envy, claiming that I have the dream job, or the easiest job in the world. That simply is not true. The study and practice of memes, or memetics, is equal parts art and science. While at times that lightning bolt of creative and comedic inspiration may take over, there is a lot of careful planning and consideration that goes into the creation of a meme for a corporate entity. Since you ravenous consumers have asked for a peek behind the curtain, I’ve devised a short list of things to consider when memeing the iZotope way.

With each meme, I strive to engage you all in a way that makes you want to tag your friends, to comment on your empathy, and to check out more of our stuff! Why? Because that generates click-throughs to our site.

I may be a God, but I am also a corporate shill. Also, I have bills to pay. And Student loans. Please keep clicking.

When you’ve gone down the rabbit hole as deep as I have, you have to start completely submerging yourself in meme culture. I’m talking being subscribed to every single meme subreddit, and hundreds of specialized meme groups on Facebook so that you are constantly on the cutting edge of meme formats and trends. With each passing month, the lifecycle of a meme becomes shorter and shorter. Remember Harambe? That was like two months of people posting stupid stuff about a Gorilla. Now, I make a meme and have less than a week to get it on the site before its old news. We live in a sad but exciting time where the modern memer grows tired of content quicker and quicker.

To be a creator, you must be equal parts reactive and innovative. While it helps to have a brand and style, no self-respecting curator of memetic content can remain complacent with a single format or genre, because no self-respecting consumer of memetic content wants the same meal every day. If you want to meme with the best, you have to consume every single ounce of content you can. Sure, your Facebook newsfeed may become a cacophony of the same joke being shared on 37 different platforms, but you’ll feel vindicated when a joke you saw two weeks ago finally catches on and sweeps the social media landscape.

“Oh man did you see that burn Chic-Fil-A just tweeted at Burger King?” is an actual question that was asked by a human being in the last week. If you threw that question out to your friends, you would almost certainly have that one friend who spends as much time as I do on the internet chime in with their opinions on who “won” the interaction. The truth? Both companies won. People are talking about two multi-billion dollar companies making jokes on Twitter. If one person of the millions of people who saw those tweets thought to themselves “lol that’s funny, and man do I want a Whopper,” then the meme was a success.

So, when AudioHertz or Sonarworks challenge me to a meme war, we all know that EVEN THOUGH my memes are superior, we’re bringing attention to both brands. Putting down your competition may make for some easy laughs, but we’re actually all just raising each other up. It’s really wholesome, in a way.

A good meme makes people laugh. Though wrought from soft-synths and VSTs, I am only a man. These tips and tricks aren’t a surefire framework for success. Sometimes, I don’t always hit the mark. Actually a lot of the time. That’s on you guys. Like my memes more. I mean, you came to a blog article to see how I meme. You really should be showing me more love guys. I literally have nothing else. Anyway, remember to like, comment and subscribe! Thanks!

*Nobody has ever asked me this question.