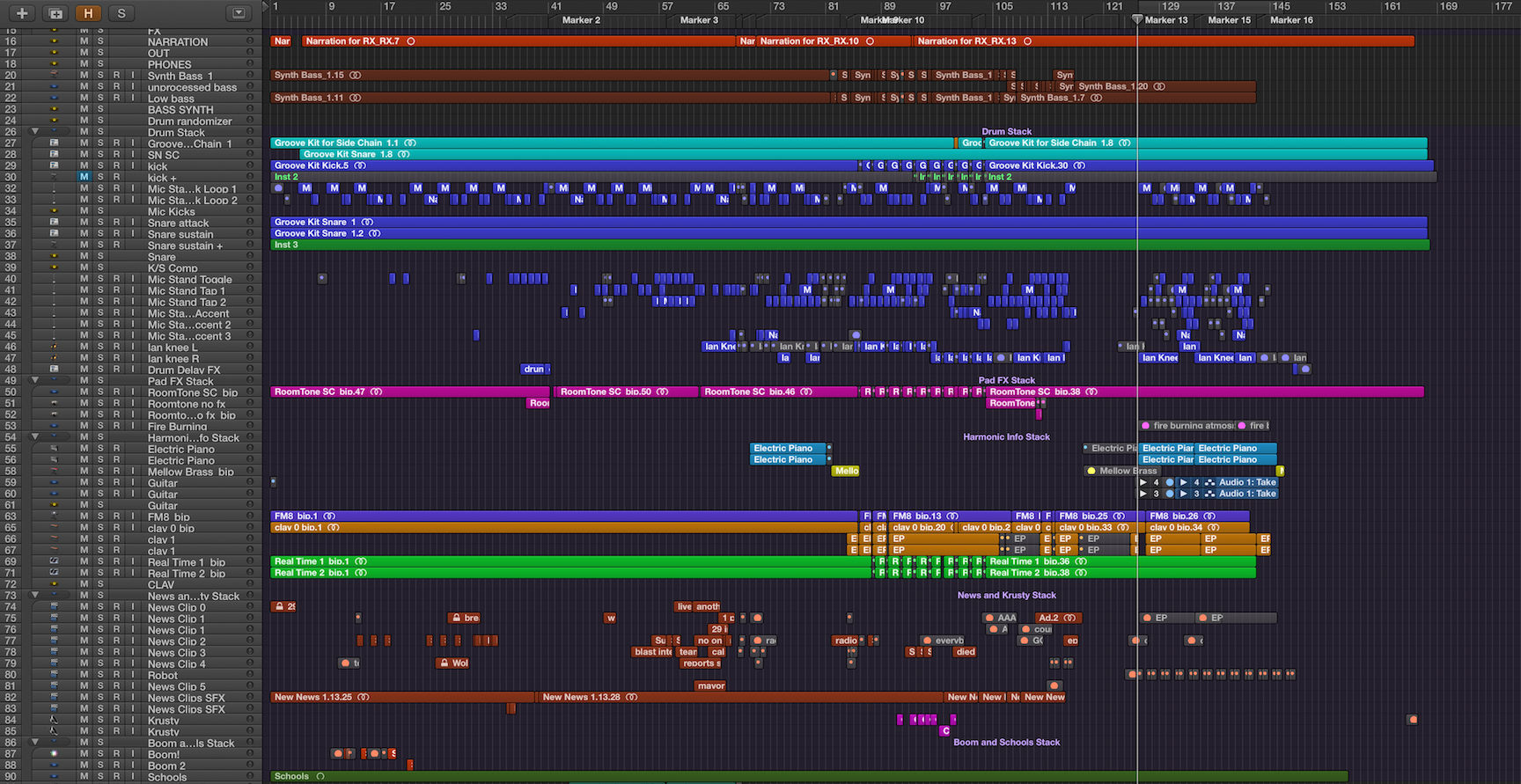 It’s not uncommon in audio production, when recording, mixing or composing, to feel as though you’re fighting the limitations of your hardware, or the capabilities of your software. In order to save creative juices, it’s important to work through these situations quickly—to turn yourself into MacGyver, fighting against limitations with whatever assets you have.

Fear not—you have more assets than you realize. There are many workarounds at your disposal, though if you’re just starting out, you might not be hip to them.

So this article exists to get you prepared! Usually, MacGyver-worthy scenarios fall into two camps: the technical and the creative. We’re going to cover both below. Let's start with the technical.

1. Got a momentary effect? Render it to a different track

If you’ve got an effect that only lasts a moment—like a delay throw or a sudden wash of modulated reverb—you could struggle to set up busses and set up auxiliary routing. Or, you could set up a new track and copy the audio over directly. After that, you only need to apply the processing you want, and when you’re done, commit the track via bounce-in-place, AudioSuite, or your DAW’s equivalent. This will save CPU.

If you’re using a DAW with a limited channel count—or if your computer has limited CPU—you can dump all your rendered effects to one dedicated channel and call this your “effects track.”

2. Recording vocals on a highly produced mix? Bounce it to a new session

Say you’ve waited to lay down vocals until after you’ve gone out and created a 100+ track with software synths and soup-to-nuts sound design. Because you’re not working with a top of the line machine, your computer is not allowing for a buffer size that will accommodate a latency-free recording.

You could freeze or render the most heavily processed tracks. But even then, you might still run into some innate session bugs that result from the computer still seeing all those plug-ins, all those soft-synths. So I prefer to bounce the track into a stereo file and open it up in a clean, new session.

When recording artists, you might find they want you to turn down a particular element, so maybe printing each group of instruments into stems is the way to go. I tend to work this way when recording drummers, who might want you to boost instruments they need to lock in with for groove purposes. However, for most singers, I find I can duck out a timbre they don’t like with EQ, so I usually start with a stereo mixdown. Then I can EQ the bass lower if they think it’s too loud. In general, this approach works, and is much faster.

3. Drum-fill processing messing up your drum sound? Render it separately

Say you’ve got an amazing, Phil Collins style drum fill—by which I mean, a fantastic tom roll worthy of the gated-reverb treatment. So you go to it: You spend a long time mixing these toms to sound as dutifully epic as possible, only to see that when it comes to the rest of the mix, the processing is too aggressive for the drums; now you have to mute the toms, slap on some gates, add volume automation, or automate mix changes based on the fills.

Not necessarily! I submit there is another way: Go through the song early on and isolate the coolest fills, the craziest tom rolls. Break these out to their own tracks, and process each fill independently when the time comes, either by AudioSuiting the specific selection (when you’re sure you’ve got it), or by bouncing all the events to their own stereo track (which you can do with Logic Pro X and other DAWs).

Now you’re not disturbing your original drum tracks for the sake of a cool fill, and you can change the processing to fit each fill individually, and also mix the original tom tracks fit in well with your normal kit (if that’s your method—it can be for me).

When working with limited CPU in audio production, the name of the game is commit, commit, commit. Freeze, bounce-in-place, AudioSuite—whatever the process that lets you free up processing, use it as soon as you’re confident in the sound. If you want, save drafts with each bounce-down so that you can always go back, and keep notes of what’s been bounced down in each draft (make sure your drafts aren’t copying over session data like audio files or samples, because that just eats up valuable hard disk real estate).

Eventually, if you run out of CPU with this process, it’s time to turn to stems, which we’ll get into during our next tip.

Cheaper DAWs frequently give you a limited number of tracks to work with, and this seems like a problem at first. However, it doesn’t have to be. The Beatles recorded Sgt. Pepper's with four bloody tracks! How? When they had multiple tracks of audio set, they bounced it down to one. They kept doing this as much as they wanted—and they had to work against the degenerative quality of analog tape all the while.

If you’ve maxed out on channels (or rather, you’re about to), try bouncing all the drums down to a stem, or all the harmonic instruments—or everything! Print what you have to an unprocessed stereo file, and load that in a new session. Now, work on top of that. Need to do it again? That’s fine! Provided you’re mixing in an intelligent manner (and this method will show you quickly if you aren’t) you can bounce-down till your heart’s content, until the mix is crowded not by virtue of analog degeneration, but by being overly jam-packed with stuff.

Find that you need to raise a guitar once you’re a few mixes in? That’s okay. That’s what drafts are for: go back to the appropriate session, raise the guitar, rebounce, and drop it back in where you need to.

Does this workaround save you time? Not really. It can save you money, however: it keeps you from having to purchase a new DAW, and lets you make sure you can keep working while you save up for one. It’s more of a temporary life hack.

This is also a good tip for dealing with CPU issues.

Let's move onto the creative. 6. No fancy auto-filter or wah wah? Automate your EQ

You know what’s amazing? The out of-this-world effects you can create with basic plug-ins! EQ, compression, and panning can accomplish a good deal, provided you’re willing to automate. Often I’ll put an EQ on a sound rather than a fancy filter, and then drag the EQ around with automation to achieve a filtering effect. By using a stock EQ followed by reverb and autopanning, I was able to turn this:

The operation is simple: just slap on an EQ like Neutron 2 or Ozone 8, instantiate a node, and perform the automation. A mouse is enough to elicit the effects.

Working with a stereo source? Put it in M/S mode and move multiple nodes around on both the mids and the sides. You’ll quickly learn what’s musical, and how to operate EQs and automation to get you the sound you want.

If you don’t like your DAW’s cold digital delay, don’t hang your head, because there are ways around it. Have a tape delay you want to create? You’ve got several options. You can start with your DAW’s delay, time it how you want, and then set up an EQ. Now, automate the roll-off of a low-pass filter, or the movement of band-pass filter, with each repeat. Add something like Neutron’s Exciter and automate the tape distortion higher and higher with each echo. When you’re done, render the whole thing to save CPU.

If I have a specific effect in mind, I’ll frequently break the phrase out into a couple of tracks and set up a manual delay—I’ll put each repeat exactly where I want it, and apply different processing to each track. When I’m done, I render it all to one track, and there it is.

The process of adding life to otherwise stock or boring effects can be done on reverb too. Find something in your DAW that sounds vaguely appropriate, and then use EQ—automated or otherwise—as well harmonic distortion (such as the sort provided by Ozone’s Exciter) to give it more of a unique feel.

8. No good reverb? Reamp your Spire (or other speaker)

This one operates on the principle that in the absence of the perfect, go for the unique. It also takes some time, but it sure is effective.

If you don’t like your reverbs, but you happen to have a tiled bathroom, as well as a speaker of any kind, a relatively mobile interface (Spire Studio, for instance), and a mic or two, you can create very interesting ambient effects.

Simply bounce the track you want to record to playable file, place the speaker in a resonant spot in the room, and then position the mics to capture more of the ambiance than the original sound (this is one of those times where you could legitimately mic a wall rather than the speaker—experiment!).

When you’ve captured it, line up the new file with the old track in your original session and see how it lies.

9. No phaser, flanger, or chorus? Create your own with track doubling and EQ

If you don’t like the sound of your DAW’s flanger, phaser, or chorus, you can create one yourself with minimal plug-ins. All you need to do is copy the track, nudge it between 5 and 15 milliseconds, and experiment with the other track’s level. Insert an EQ on the doubled track and notch out some frequencies, such as the one pictured in Neutron 2 below. Automate how far forward you push certain phrases, going between 5 and 15 milliseconds, or automate the EQ if you like. You’ll be surprised what you can do without fancy phaser plug-ins.

This is but a smattering of the things you can accomplish MacGyver style in audio production. I confess that in thinking of this article, I actually forgot a lot of the weird, flash-in-the-pan things I’ve done over the years, not because I’ve done so many, but because of the freedom this way of working affords you: When you approach mixing problems with this kind of elasticity, you can truly workaround most problem, and what’s more, forget it was even a problem in the first place. So give being MacGyver a go, if not for the sounds you create, then for what it’ll do for your brain.