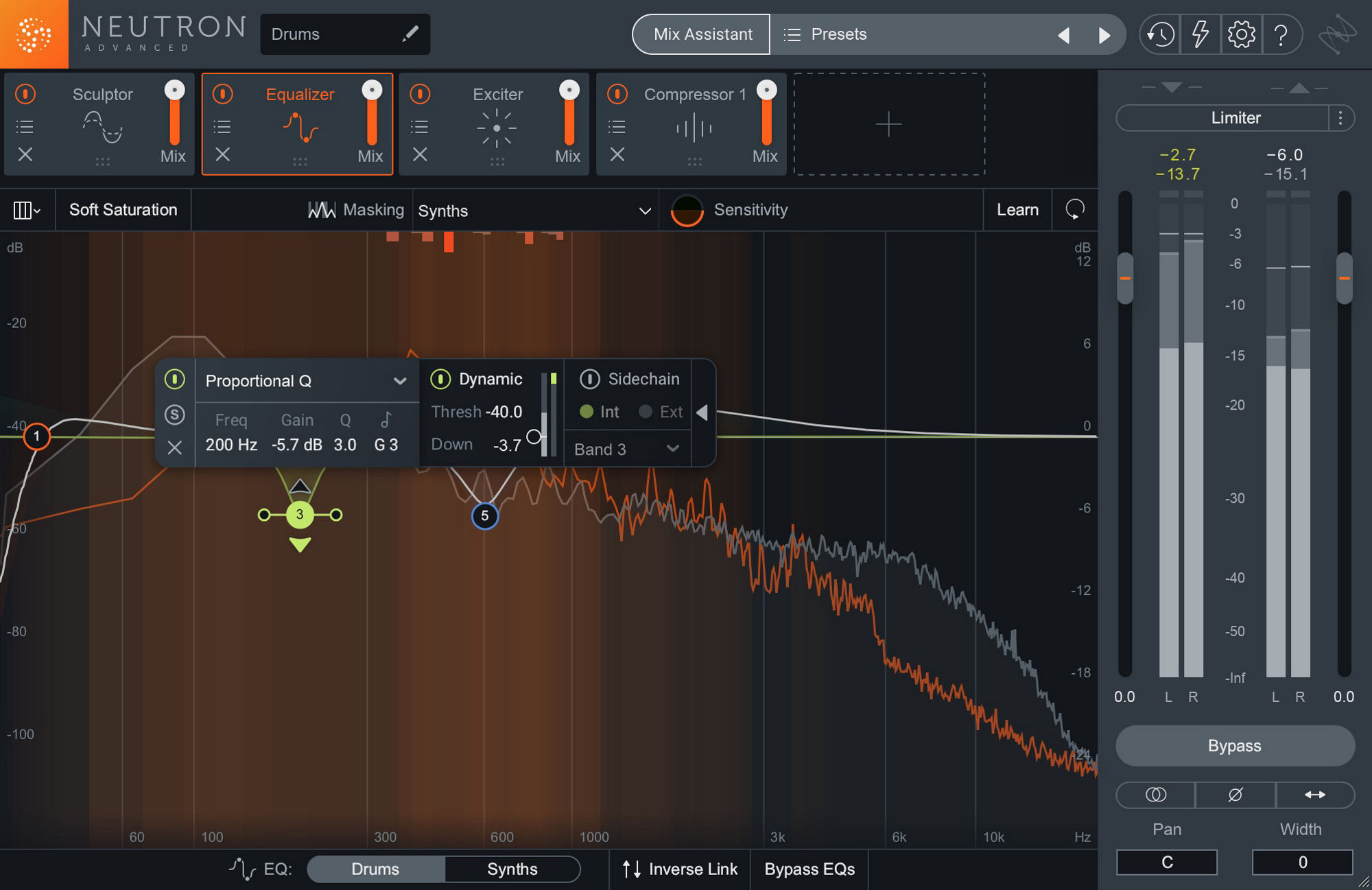 Frequency masking is an auditory phenomenon that can occur when two sounds sharing similar frequencies are played at the same time. In the range where the frequencies overlap, the louder of the two will take precedence, partially or fully blocking out its competitor to our ears. We can’t focus on both sounds at the same time, so the quieter sound becomes noticeably less clear in the mix.

Masking occurs in all styles of mixes, and, at its worst, can result in muddiness in the lows, bloating in the mids, and pinging madness in the highs.

Using the new-and-improved Masking Meter in Neutron 3—which now intuitively allows you to visualize and fix potential frequency clashes in a mix in one plug-in window—we’re sharing five tips to unmask your mix.

1. Start from the most important mix element

The more you add to a mix, the greater your risk of having masking occur. One of the best defenses against masking issues is smart recording and arrangement, but every situation is different and masking can occur from unexpected sources. A bit of masking can potentially make a song sound more cohesive, but like all things audio, the presence of masking can become overwhelming too.

So where do you start unmasking? And when do you call it quits? I find it makes sense to start with the most important element in the mix, like the vocals or drums. You want lead elements to sound clear and powerful, so reducing the amount of masking occurring with them is crucial. Once you handle these main sounds, it's easier to make decisions about what else needs unmasking and what doesn’t.

In your DAW, drag a copy of Neutron’s EQ onto a lead element and press the drop-down menu next to “Masking,” which will show you other instances of Neutron that can be brought up in the same window. The plug-in is capable of bringing up other iZotope plug-ins too, but I’ll get to that later.

Once you make a pick, Neutron will display the frequency spectra of both signals and reveal where masking is taking place, represented by the red bars at the top and the orange overlays on the EQ. In this case, the range between 300–600 Hz is troublesome. The Masking Meter in Neutron 3

It's up to you and your ears to determine which element you want to sculpt with EQ to reduce masking. If the drums already sound great, it could make sense to chip away at the instruments around it. In the screenshot above, I’ve made a cut on the drums, but you can also hit the “Synths” tab next to it and EQ there instead. Or you can EQ both at the same time, which leads me to my next point…

One of the most useful and fun features in the Masking Meter is the Inverse Link option, which applies complementary EQ settings to the instruments being analyzed. This means that a cut of 1 dB at 300 Hz on one instrument will produce an automatic boost of 1 dB at the same frequency on the other. Just click Inverse Link to activate the feature. This way, you can make cuts and boosts knowing they will not aggravate frequency masking further. If your synth needs a boost at 4 kHz, Masking Meter will cut that same frequency on the drums to avoid nasty collisions. In the screenshot above, the “inverse” cut is represented by dashed lines. You can switch over the second instrument and make changes there too.

If you turn Inverse Link off, node position will remain unchained, and you can now shape each curve independently with manual moves, like widening the Q, bringing up the gain, and so on.

Certain instances of masking are solved with a single, static cut, but often times frequency collisions happen in an uneven manner. The bass masks the kick, but only when the kick is in the mix. The synths clash with the keys in the chorus, not the verse. The leads only rub against backgrounds when the voice dips into the deeper register.

Since masking doesn’t occur all the time, you don’t need your EQ to be actively cutting frequencies all the time.

This makes the dynamic EQ functionality on each node very useful. Let’s take the classic kick and bass war as an example. If you dial in a cut on the bass track where masking is occurring (as indicated by the Masking Meter), hit dynamic mode and then sidechain mode, and use the corresponding external EQ band on the kick track as an input, the bassline will only be EQed when the kick is present—at the specific frequency you selected, in this case, Band 1.

This means whenever the kick isn’t in the mix, the bassline stays in its unaltered state, so you don’t have to compromise sound quality or use multiple EQs across duplicate tracks.

A note of caution: it is easy to get carried away with dynamic EQ, so my suggestion would be to stop after two or three nodes. Too much dynamic EQ can produce an unnatural, wobbling effect. Who knows? Maybe this is what you want!

Given the visual presentation of Masking Meter, it is easy to forget (or just not know) that the presence of masking is influenced by level. If the Masking Meter in your session is really lighting up, and you can manage to knock a few dBs to bring on certain instruments, this might just solve your problem. You can even use Neutron 3’s Mix Assistant to help set levels in your mix to avoid masking.

But it is usually a little more complicated than this. Here’s an example:

A mistake I see often (and one I’ve made myself many times) in electronic music mixes are kicks drums being left too high in the song. This is usually done by newer engineers and producers who are trying to fix masking problems with the groove by adding more smack.

To bring the mix to a more balanced state, pull down the level of the kick until it sounds “in the pocket,” but still somewhat messy in the context of other bass and mid-range elements. Then, place Neutron on the kick and follow the Masking Meter visual, carving away space on the instruments where the competing frequencies are inessential. Combined with the tips above, you will soon find your kick can breathe and sounds punchy. If you need to, bring up the entire mix up in level after this step to add a little oomph.

5. Try panning for a change

After identifying masking issues in Neutron 3, you might want to clean things up with EQ at the source, then finish the job off with your DAW’s pan dial.

This is often the right choice when dealing with wide instruments, like pianos, that may sound great on their own but tend to dominate the mix and blur details once other sounds are brought in. Folding a piano track into mono and sending it off to the side may require less severe EQing to get it to sit properly in the mix.

Panning also proves useful as a masking remedy when the mix has a lot going on. A mix can easily become overloaded when every element is in the same center position. You will get a better sense of clarity and separation by keeping the most important sounds in the middle and pushing secondary and tertiary sounds to the sides. Be sure to consider effect buses position too—if your guitars are pushed to the left, should the reverb follow it? Or does ambience sound better panned to the right, filling up some space there?

Try panning with the Visual Mixer, which reads all instances of Neutron.

Inter-plugin communication does what the name describes: it allows plugins to share data between one another to more quickly identify problems and find solutions. Here’s one scenario:

Say you put together the perfect effects chain for your guitars, but now that you’ve brought in the keyboards, you’re hearing frequency masking. Place Neutron 3 on the keys and Relay on the guitars—this way, Neutron will be able to read the frequency information of the guitar track, so you can see where masking is occurring (in blueish green) and make the necessary changes to the keys without altering the guitar sound. Inter-plugin communication also allow for this same setup with Neoverb, Stutter Edit 2, VocalSynth 2, Nectar 3+, Tonal Balance Control 2, Ozone 9, and Insight 2.

Relay offers a quick, CPU-friendly option for frequency masking issues across any track in the mix. It also has panning, stereo widening, and high-pass filtering options for additional surgical adjustments.

Masking occurs is just about every mix, and with Masking Meter, you have a number of ways to quickly diagnose and solve problems. As a final tip, note that masking can be made worse by a song’s arrangement. In my early days of production, I was certainly guilty of adding too many instruments to the mix, instead of focusing on fine-tuning just a handful.

As a result, certain issues would rear their head over and again: the low-end would swallow itself and sound flat, the mids were blurred from too many stacked, fuzzy synths, and the upper mids and highs were equally messy as a result of multiple vocals stacks within in the same register.

If you have the right relationship with the person sending you their music, you may want to suggest re-writing certain parts if mixing just won’t save it. You can sometimes make the executive call yourself too—mute a part here, swap a kick drum there, etc. It might be just what the mix needs. Through it all, you have Masking Meter as a trusty second set of ears.