You’ve probably heard the term panning used in regards to mixing music, and whether or not you can define it, if you have been listening to music since or anytime after the 1960s, you certainly have heard it.

In this article, we will discuss panning in music by breaking down some fundamental concepts, adding a dash of historical context, and doing a bit of listening and panning practice with Visual Mixer. You can follow along by trying a free demo of Neutron, which includes Visual Mixer.

What is panning in music?

Panning is the act of placing or moving a sound anywhere in the stereo field of a stereo playback system. With panning, sound sources can be placed in a way that they are perceived as coming from the left speaker, the right speaker, or from anywhere in between. This available area of sound placement, spanning from left to right, is known as the stereo field.

Why is panning important?

Panning creates space for each element in the mix so everything can be heard by the listener. It's especially useful as a way of minimizing frequency masking, along with EQ, by seperating sounds that are clashing in similar frequencies. Every track in your mix should be panned. Even if an instrument is panned center, it's important to be intentional about where each sound is positioned in the stereo field.

Panning is also an important element of mixing to consider because it'll affect how music sounds on different playback systems.

Stereo Mix: A mix in which sounds are placed in various locations across the stereo field of a stereo playback system. Stereo mixes cannot be reproduced on mono playback systems.

How to pan instruments with Visual Mixer

In addition to a pan pot in a DAW, you can intuitively pan your tracks with iZotope's Visual Mixer. Using iZotope’s IPC (inter-plugin communication) technology, you can adjust pan, volume, and the stereo width of any track in your session containing an instance of Neutron. Here is a mix that I have created of the song "Overconscious" by Tall Buildings with instances of Neutron on drums, moog bass, guitar, wurlitzer, organ, and vocals. Using Visual Mixer I have created both a mono mix as well as a stereo mix.

Take a look at how instruments are placed across the Visual Mixer. In mono, the instruments are lined up from front to back, as the mix is the same coming out of the left and right speakers. 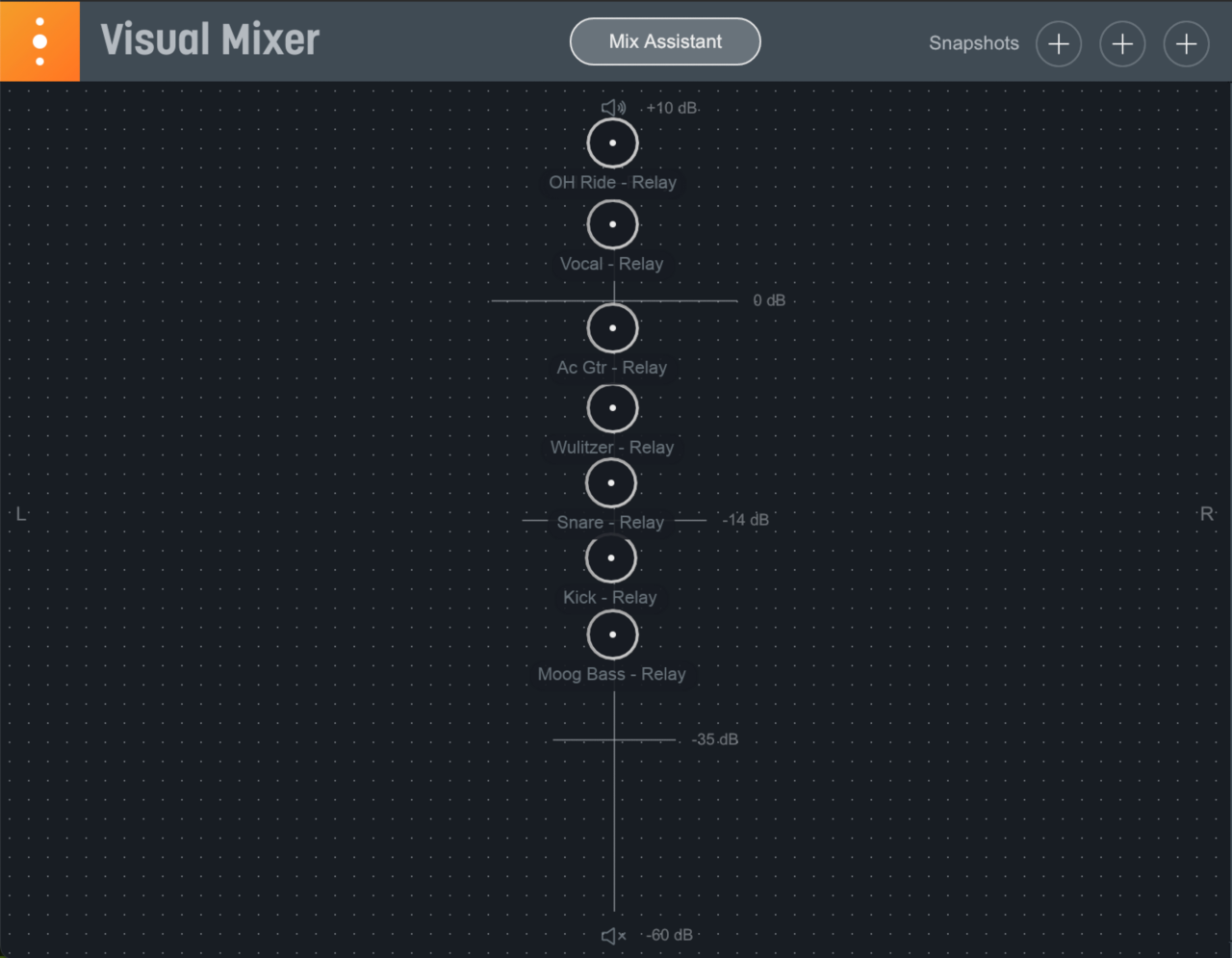 "Overconscious" by Tall Buildings in mono

In a stereo mix, the Visual Mixer allows you to place instruments like you would in a concert hall, as the left and right speakers can convey different information across the space. 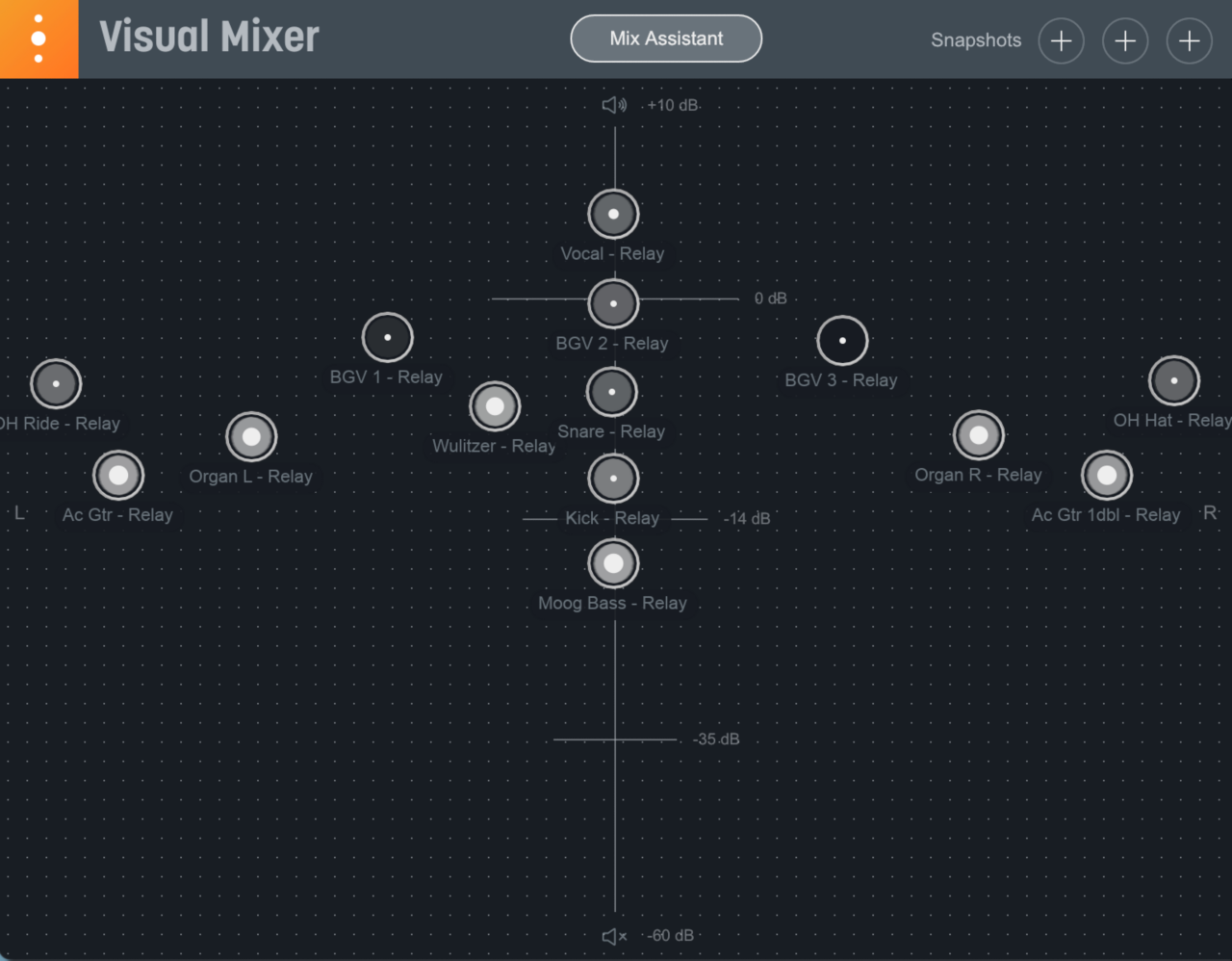 "Overconscious" by Tall Buildings in stereo And here's what it sounds like centered, but widened. If you're listening on headphones, note the difference in the stereo placement on both audio examples. The widened drum sample sounds louder, more "up front" than the narrow width example. 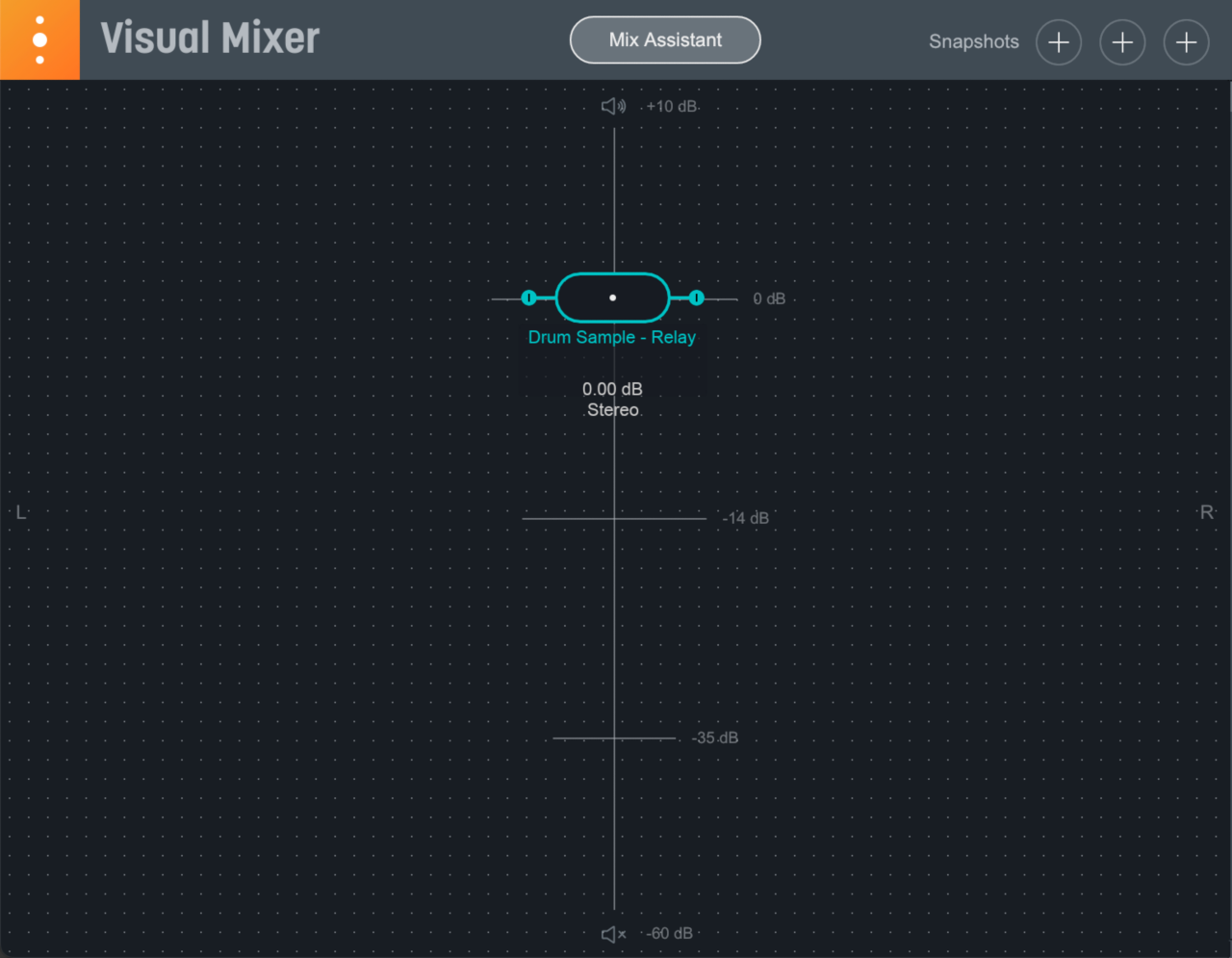 Aside from mono and stereo, there is another approach known as LCR, or ‘cardinal points panning,’ which is a hybrid of mono and stereo. LCR panning stands for left, center, right and it's an approach to panning that pans everything in the mix hard left, hard right, or center, and avoids using any intermediate panning positions.

Traditionally (not always, but most often) the bass, kick, snare, and vocal are panned to the center. Adhering to this, while panning all other elements like piano, keys, guitars, percussion, background vocals, etc. hard left and hard right can help to provide the lead vocal more room to shine with less elements to crowd it or fight for the same place in the mix. This is not to say that this technique is the answer for all mixes, but it is something to be aware of and to experiment with as it can be rather effective.

Here are two song examples that were both mixed using the LCR approach.

It is interesting to note that in the 1960s, during the transition from mono to stereo, stereo mixing consoles were not equipped with continuous pan pots, but rather 3-position pan switches. In this configuration, the only panning options at the engineer's disposal were left, center, or right.

It is true that the full stereo field could have been utilized had the engineers duplicated tracks, panned them hard left and right and moved them across the stereo field by changing their relative volume levels, utilizing the phantom image phenomenon as mentioned earlier, however this was not practical as track counts were often limited to 4 channels. The 8-track was not widely available until the late 1960s, and synchronizing two tape machines together to increase track count was not so easily accomplished until the early 1970s.

Here are a few song examples that were mixed in LCR on consoles with only 3-position pan switches. Not only is the placement of the instruments a creative decision, but also a byproduct of the technical limitations of the equipment at that time.

In this article we have only just scratched the surface of panning, what it is, and how it can be implemented. There are multiple panning techniques, philosophies, and common practices in the world of mixing. None better or worse, but each with their own purpose. As every song is different, there is no one-size-fits-all.

As you listen to your favorite music from various decades, across genres, including live albums and studio albums, pay attention to where the instruments are placed in each mix. Reference different panning schemes and experiment by applying them to your own productions.

For more on panning and how it can be used effectively, check out other Learn articles about panning music with intention as well as iZotope's YouTube series, Are You Listening? that covers panning in a mixing session as well as advanced stereo imaging techniques in mastering. And don't forget to play around with panning techniques with a free trial of Neutron, iZotope's intuitive mixing plug-in.