Create a better sonic picture with these panning techniques.

This article is all about panning—specifically, it will give you tips to keep in mind when figuring out how to pan elements in your mix. Though the kick, snare, bass, and vocals often sit in the middle of a mix (commonly referred to as C or 0 in most DAWs), everything else is pretty much up for grabs.

Canny mix engineers take advantage of panning to create sonic pictures, to tell stories, to achieve balance, to create contrast, to build tension, and to release tension. They keep in mind that our ears tend to focus on signals that are panned center, extreme left, or extreme right, with all the other points being less distinct and more impressionistic.

There are no hard and fast rules for panning—just guidelines. Still, these tips will help you achieve a wide, full-sounding mix quickly.

Tip: As you read about these panning techniques, follow along in iZotope’s free Visual Mixer, also included in Neutron 4 and Music Production Suite 5 Universal Edition.

This is an oldie, but a goodie: if you have double-tracked instruments (the same part recorded twice, for effect), try panning them hard left and hard right. This is a classic move with heavy electric guitars, though it can also work with instruments such as EDM synths (think drops) and saxophones (think funk). The effect is a fuller-sounding mix. Observe the below example, made with Apple loops.

The difference is staggering. All we changed was the panning scheme, as shown here in iZotope's Visual Mixer. 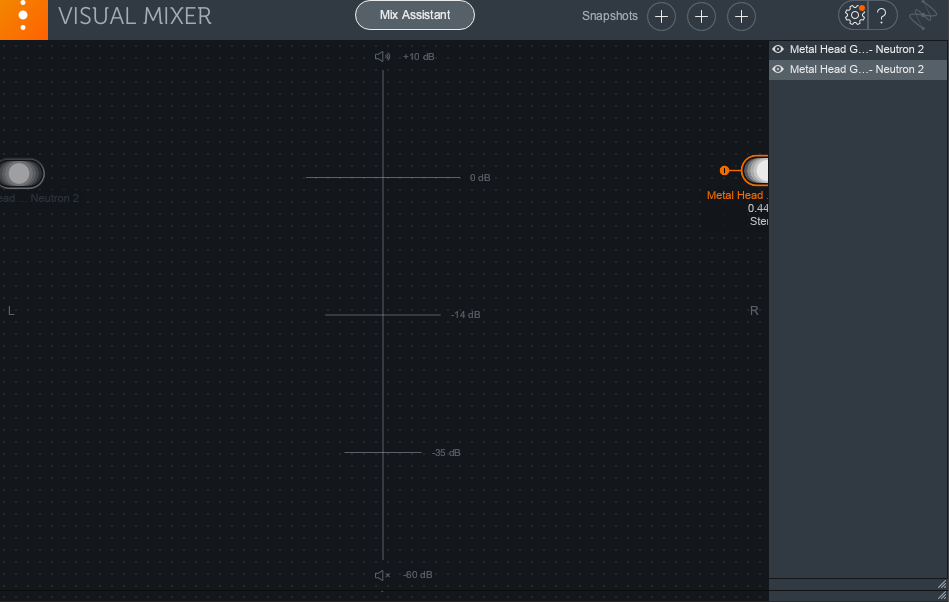 Guitars with a hard panning scheme in Visual Mixer

If you have two instruments occupying similar frequencies, try panning them opposite of one another, say 20 percent left and 20 percent right. I recently did this for a series of jazz tunes, where an electric guitar doubled the saxophone during the melodies. Panned in the center, both parts clashed. Panned slightly to the sides, they sounded correct. 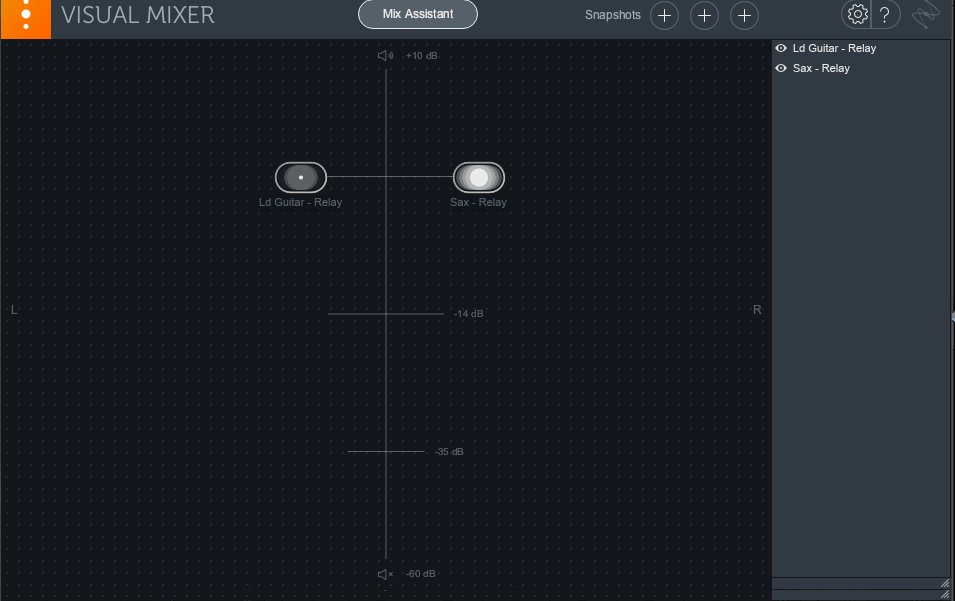 Remember: complementary panning will invite a listener into the sound, whereas blasting two rubbing instruments from the same spatial location will be more confrontational. Sometimes that’s okay—but you should always know what you’re doing.

We have certain conventions when it comes to panning, and remembering them can help you make more meaningful, intentional mixes.

Snare drums usually appear in the center image, even though they’re not centered on a drum kit. The same is true for the bass guitar and the kick drum. Put these elements anywhere but the center, and you’re immediately calling attention to them in an eccentric, offhand way.

This, of course, could be just the ticket. It’s well within your rights to mess with tradition. But you must first know that it’s proper to do so—and the only way to know is to pay strict attention to conventions.

In today’s world, we don’t get a lot of dynamic range. People still want things loud, loud, and more loud—despite the loudness wars being supposedly over. One of the ways we can create the illusion of dynamics is through creating different panning schemes for the verse and chorus.

During the verses, try a narrower panning scheme, something like this: 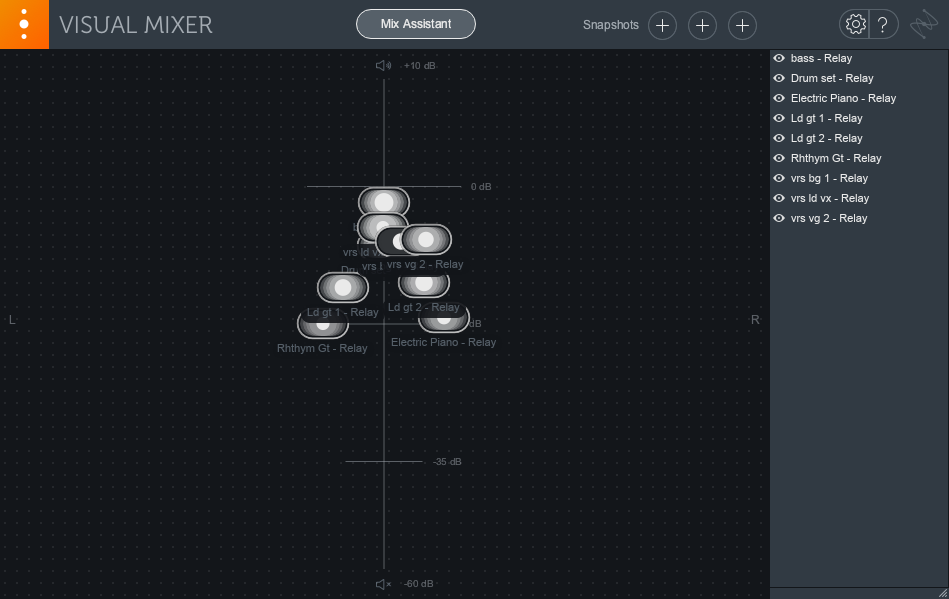 Example of a narrow panning scheme in the verse

Then, when it’s time for the chorus, move the instruments wider, like so: 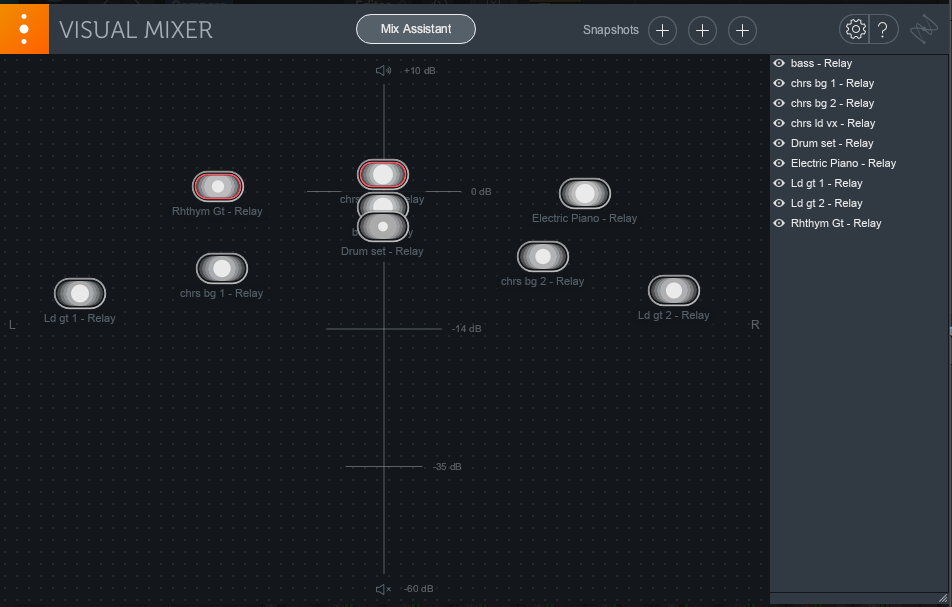 Example of a wide panning scheme in the chorus

This will create a similar feeling of arrival, making the mix feel louder without necessarily becoming louder.

5. Check your work in mono

Always check your mix in mono to ensure you aren’t losing too much in the fold-down. It’s possible to spend a long time panning everything, only to go too far and realize your mix sounded more impactful before you even began.

If you’re taking a single instrument and using delay tricks or polarity manipulation to achieve width, you must monitor the changes of this effect in mono. This royalty-free guitar might sound acceptable against this royalty-free bass:

Each part may sound more distinct, in stereo, with some polarity trickery on the guitars making them feel wider.

But now listen in mono:

Unfortunately, mono compatibility is still a thing. It’s important to club mixes, to supermarket broadcasts, and more. Always keep it in mind.

If you’re mixing any form of electronic music likely to be played in a club setting, bear in mind that many playback systems are mono. And, if they’re not wired to be mono, they can often feel functionally mono, because of how sound travels in big packed spaces.

What does this mean for you? Pay special attention to elements such as reverb, panning moves, and more. Your fancy trickery on a transitional riser might lose all impact in a club.

Load up the impulse response in your favorite convolution reverb, and just listen from time to time to make sure the mix sounds as good as a reference, also pumped through the club IR. It’s not a fool-proof solution, but it helps.

7. However you pan, check your mix in various sound systems

Translation checks are always a good idea—especially so when it comes to panning decisions. Check your mix in headphones to make sure the mix doesn’t sound disjointed or off-balance. Your monitors might be excellent, but headphones sound different, as they eliminate crosstalk (the phenomenon of information from the right speaker reaching the left ear and vice versa).

Also, check your mix car stereos if possible, as no listeners really sit in the center position of a car stereo; be sure your panning decisions make sense if you’re sitting a little to the left or right. It’s ultimately a polite thing to do for the listener.

8. Don’t overdo any one panning location unless you want to stress out the listener

Panning is a way of achieving balance, just like frequency manipulation and dynamic control. If you choose an arbitrary location within the stereo field and jam it chock full of trebly, busy instruments, you’re going to tax the listener. I recommend not taxing the listener unless you’re going for a specific effect, such as building tension to an inevitable release (this is where the use of complementary panning, after the tension build-up) would come into play.

Take the example of an acoustic guitar and a hi-hat. Both are usually marking straight subdivisions in a mix (8th notes or 16th notes). Both have a lot of high-end information, and both can be jangly or harsh.

Here’s an acoustic guitar, a drum set playing a hi-hat pattern, and a shaker, all in the same mix. The hi-hat, guitar, and shaker all panned to roughly the same spot, like so: 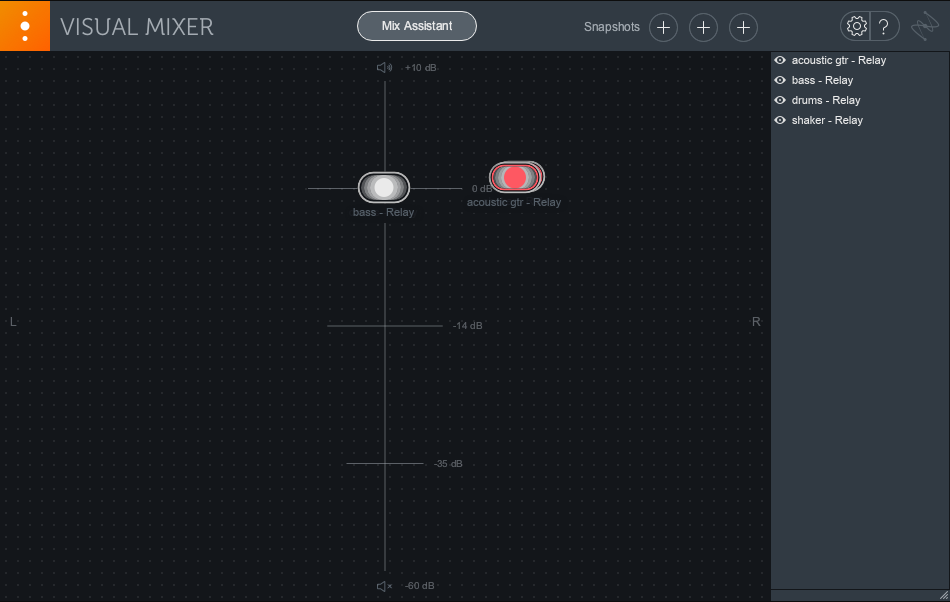 Example of stressed out panning

It sounds pretty harsh to me. But if I move these three elements out of each other’s way, I achieve a better balance. 9. Use panning to evoke classic genres

Sometimes older recordings, or modern recordings mixed to evoke a nostalgic vibe, employ drastically weird panning schemes—such as placing all the drums in one speaker, and the rest of the band in another. This can be used for effect. Rilo Kiley and Elliott Smith both utilized this technique in their later work to achieve specific textures.

Try just making just one element of your mix wide and spacious, like doubled-guitars, a stereo piano track, or drum overheads, and make everything else work around the center with careful level setting and judicious EQ. You’ll be surprised how powerful this can be.

Try these panning techniques in your music

I hope these basic panning tips are helpful in your mixing endeavors. Try out these panning techniques in iZotope’s free Visual Mixer. Once you master them, you can move on to more advanced techniques, such as the ones listed in this article.