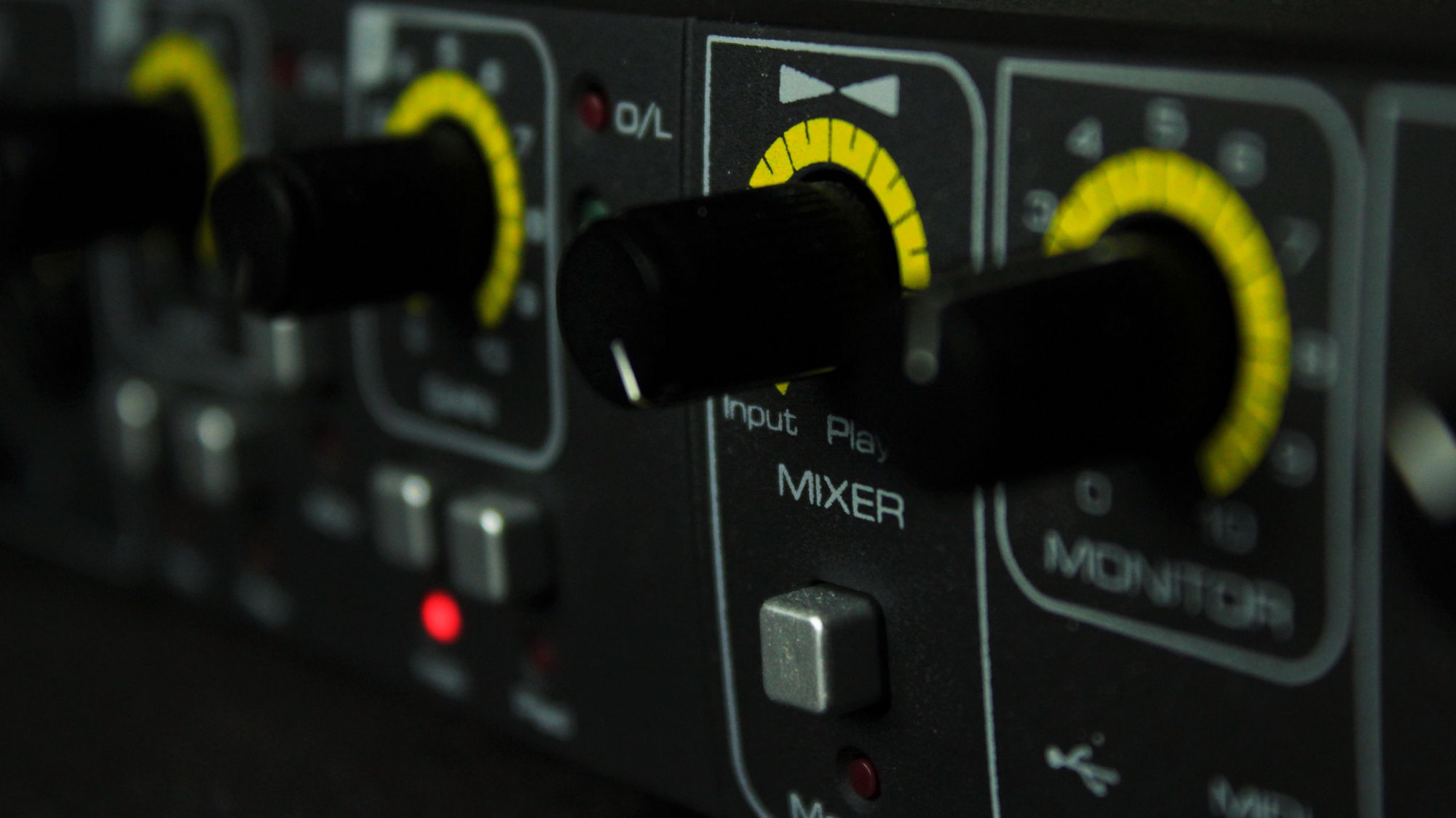 Likening the mix process to building a house isn’t a new metaphor, but I love it anyway. Why? Because it works. Take this gem: just as a house boasts elements holding it together—the foundation, the roof, etc.—so too does a mix.

In The Mixing Engineer’s Handbook, Bobby Owsinski separates these blocks into five categories: Foundation, Pad, Rhythm, Lead, and Fills. You can consider Michael Brauer’s multibus method to be a reflection of similar, organizing principles.

Ultimately, you will need to decide upon your own system for building blocks; not to do so would would serve chaos over order: you’d wind up stumbling throughout a half-finished house with a piece of wood and no idea where to nail it up. For that reason, I’m offering my system of categorization, because maybe it’ll help.

This isn’t a listicle; I’m not here to build up suspense around each block, but to get a little deeper into how they work, both separately and together.

Percussion, bass, harmonic information, pads, melody, and effects—these are my building blocks. Here’s how I define them:

Any instrument whose rhythmical function:

A classic example would be the drums: while they might be tuned to the key of the song, their root note isn’t their primary purpose (not usually, anyway). Instead, drums frequently provide propulsion. A more counterintuitive example might be a scratchy, funky guitar part. In the mix, its tonal content might be lost behind a wall of sound, but that sixteenth note picking rushes the song along like a well-played shaker.

We could consider bass to be any instrument that hangs at around 100 Hz and below. But it’s a bit more complicated; indeed, a more apt spelling would be “base,” as this is the anchor of the song—and without it, you’re adrift.

Examples include the acoustic bass and the electric bass, but a jazz trio’s Hammond organ also centers the arrangement, as does the 808 kick drum in a hip-hop mix.

This category holds any non-stagnant generator of harmony. What do I mean? Think percussion in reverse: an instrument whose harmonies:

Notice I wrote “supersede” and not “obliterate,” because there is a gray area. And in this gray area, rhythm does come into play. The composer Bach influenced Western harmony not through block chords, but through contrapuntal, rhythmic melodies—a violin line moving against a cello figure, for example. When taken in totem, these solo instruments create overarching harmonic movement. Thus, a contrapuntal string quartet can serve the same function as a strummed acoustic guitar, depending on the arrangement.

Here we also have harmonic content, but its rhythm is not of much importance. Background vocals holding whole-note “oooh” come to mind, as does a synth swell that boasts no arpeggiation or sequencing. A Hammond organ can often hang like a pad.

Any sound or instrument whose performance you’re guaranteed to remember. The hook, the lead, whatever you want to call it—this element is the standout. It can be your singer, your rapper, your saxophone, your soli of strings, and more. It's the centerpiece, holding all mnemonic value; if it grabs the attention and rings in your brain, it qualifies.

These include your delays, your reverbs, and what have you, but also encompass stingers, risers, and sound effects. They can often be “exclamations”—things that stab the mix in the night.

I like to think of them as emotional indicators, subtle or otherwise: Elvis Costello singing solo over an electric guitar is often more aggressive than Jeff Buckley doing so, and this can be a function not only of timbre, but of the halls and rooms into which they’ve been engineered.

What’s next? Nearly everything: Classifying the building blocks of a mix leads to a wondrous  workflow. For instance...

Organization and prep time are streamlined

When I’m going through a mix I haven’t seen before, I tend to solo quickly through each track and get a feel for it (I talk a little about the process in here). This helps me sort the tracks into building blocks. Based on my determinations, I decide how to route tracks to submixes, and I begin to form my game plan and governing ideas.

The approach provides me with a solid foundation before proceeding. I estimate that, over the years, this style of mixing has cut my work time in half. It’s an ounce-of-prevention versus pound-of-cure sort of thing, and I suspect it might be of help to you.

It’s not about the frequency, it’s about function

Many low-end elements sport high-midrange for snap (think of the attack of an electric bass). A guitar can extend down below the 100 Hz range and still be harmonic, rather than bass material. I think of Tool here, where the frequency content may dwell lower than the bass, but because of the panning, it doesn’t provide the centered aspect you’d expect from a bass building block.

Vocals can be pads, melodies can be chordal…indeed, you begin to realize that frequency content has little to do it with: it’s all about function. Bass feels anchoring; percussion feels propulsive; harmonic information feels supportive; melodies feel ear-catching, pads feel lilting; effects feel any manner of ways—disorienting, swimmy, or a whole host of adjectives, so long as they don’t conflict with the previous five.

I suspect you’ll find your own adjectives, your own connections. The importance, of course, lies in making them.

Any instrument can change categories at any time

Let’s use Tool again, as their arrangements make the case. The band sports a three-piece rhythm section of drums, bass, and guitar, but roles often switch during instrumental passages. Think of the song “Schism,” roughly four minutes in: the bass handles the melody, the guitar’s arpeggiation provides rhythmic counterpoint, and the drummer lays down a harmonic loop of tuned, electronic percussion that serves as harmonic information. All of the roles have been subverted.

Next, we could take a look at Radiohead’s use of strings for effect (“How to Disappear Completely”), but instead, let’s spend some time with a song from a different genre: “Nefertiti” by Miles Davis. Miles Davis and Wayne Shorter loop the melody with little variance. Meanwhile, Tony Williams’ drumming grows increasingly erratic in one head phone, while Herbie Hancock’s piano swoops away from chordal accompaniment and strikes out into its own path. In later sections of the tune, it’s almost as if the melody line is our rhythm, the piano reaches out into melody, and the drums dictate our point of center. What happens to the bass here? It fades back into the mix.

Which brings us to the mixing engineer’s takeaway: Understanding the interplay dictates how we change the mix. Notice that the bass for “Nefertiti” is relatively muted, while three songs later, the song “Madness” boosts the bass to anchor the soloing melodicists as they traverse a more conventional format.

In Alan Parsons’s training DVD, he demonstrates a curious technique: he sets up the drums, then mutes them entirely as he focuses on balancing harmonic content. This method illustrates that soloing a building block can help you focus the mix.

The conventional wisdom is that soloing is bad. True, but because your building blocks are made of elements that result in a unified mix, working on each of them in containment—shaping them into the best version of themselves—can be quite helpful; after all, a contractor isn’t going to lay brick and put up drywall at the same time.

After working on a building block in solo, balancing it against the rest of the mix can often be handled with less effort—perhaps a simple notch across a bus, or a confident boost to a single instrument. Spend just a little time in solo here and you’ll be more familiar with each block, what its strengths and weaknesses are, and what you can get from it. You'll learn how to make compromises that serve the whole construction without undue detriment to any specific block.

Looking for a way to organize your song into submixes? These building blocks—indeed any building blocks you come up with—make for excellent candidates. You can easily mute and solo the quintessential pieces of your arrangement, instantiate broad-stroke methods of equalization to fit blocks together, automate for rhythmic emphasis or melodic sway, and more. Nothing is easier than muting all of your effects with the push of a button to see if subtlety has grown into cacophony. Nothing is easier than muting the bass block to see if there’s a stray bass element in your percussion block—if there’s an instrument that’s anchoring, rather than propelling.

It’s also worth noting that for iZotope users, the interactivity of building blocks can be served with plug-ins like Neutron (with its Masking Meter) and Visual Mixer (with its stimulating, simplifying GUI).

Building blocks help you in production and mixing alike

A truly excellent byproduct of this approach is how it aids both disciplines. Anyone who wishes to jump the fence between practices will benefit from this thoughtful breakdown of the mix/arrangement. After all, many mixing engineers got their start because it was necessary—because they couldn’t afford the engineer.

I’d wager that familiarity with building blocks helps producers create successful mixes, and aids mixing engineers in production pursuits. After all, mixing and arranging are both based on juggling these easements: Arrangement is all about creating emotion by cutting swaths and carving paths; mixing is about balancing the technical while fostering an emotional journey. Both are helped by understanding the parts which make a whole.

This particular divvying of a mix into building blocks may not resonate with you—but the explanation of why to think this way should. The takeaway lies in is the act of organization. It disciplines you, serves as a way into the tune, a shortcut for your brain into the mixing process. Whether you choose the six building blocks as I’ve described or to fashion your own, you’re guaranteed to build a stronger construct if you spent time classifying the materials.