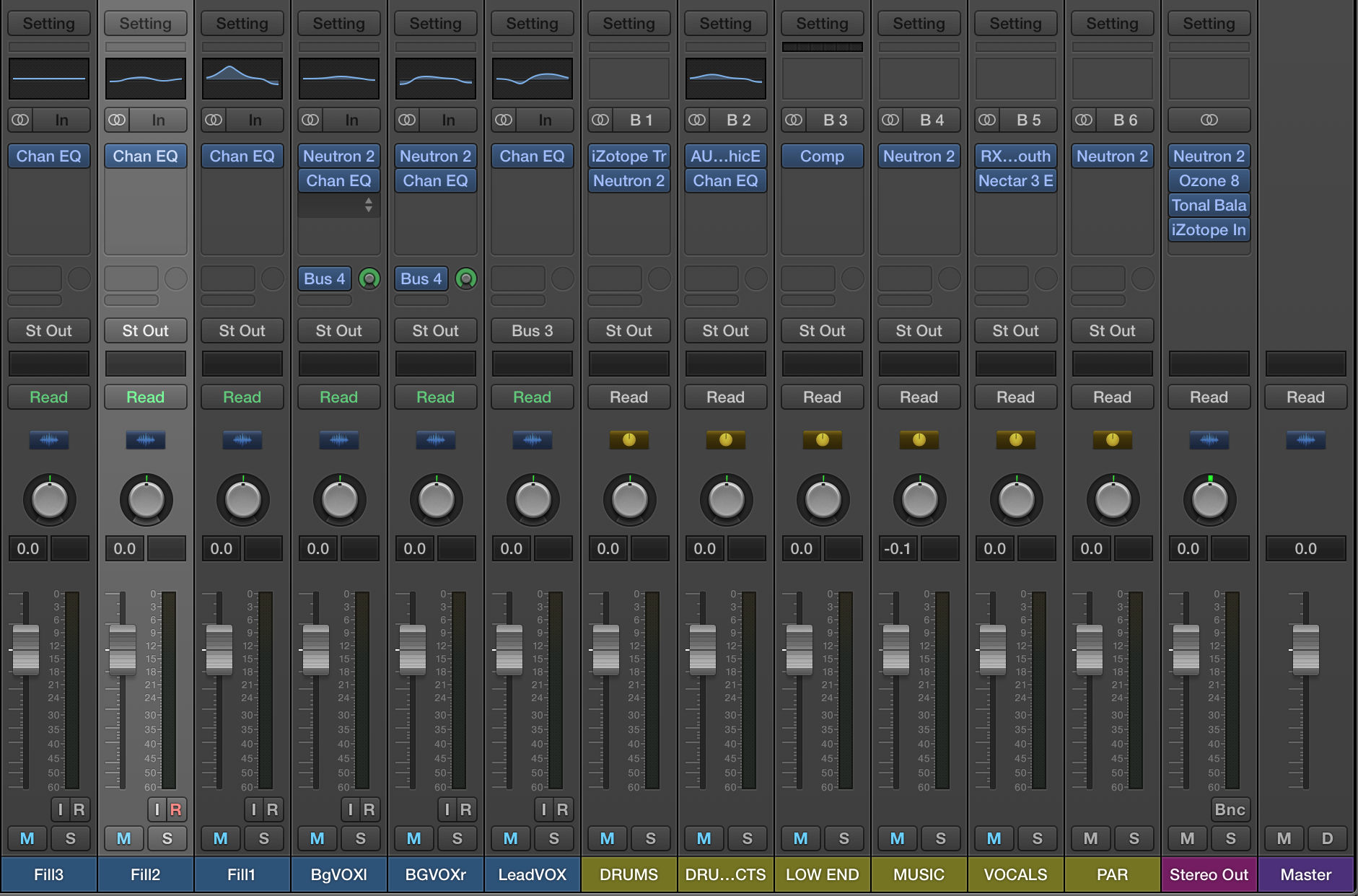 In a previous article, I mentioned submixes briefly, talking about how vital they are to mixing sessions with large track counts. But submixes can be helpful even if your mixes are on the slim side. A rock tune from an indie band might not be larger than 24 tracks, but assigning their outputs to various submixes can still do wonders for your sound.

But first, what is a submix? Perhaps you’re using them and you’re not even aware of it: Take a bunch of guitars and feed them to the same bus—the same auxiliary track—and you’ve got yourself a submix.

It can go farther: you can set up your mixing template so that all your instruments feed submixes, and then use plug-ins or processing across these submixes to glue elements together on a macro level, priming the palate before it all hits the stereo bus.

What follows are a few ways to go about setting up submixes, from the simplest to the most grandiose. At the end is a trick I use all the time to give my mixes a little more life.

1. Using submixes for specific instruments on a case by case basis

Our first method involves creating submixes for groups of instruments that require group processing, but only setting them as you need them. A submix could be the aforementioned guitars, or a group of vocals all feeding the same compressor. You’d simply highlight all the applicable tracks and assign their outputs to a free, stereo auxiliary channel.

The benefits of this approach include the ability to flavor a whole plate of tracks at once with a single plug-in, as well as a quick means for changing/automating multiple track-levels with one fader.

For acoustic mixes—or small classical pieces where you need to keep it natural—this might be the way to go. Everything still hits the stereo bus without too many interconnecting submixes, but you can still control all the strings (or the fiddles, as the case may be) with one push of the fader.

Here’s the thing: during denser mixes (i.e., rock, pop, hip-hop) you might find yourself in the jam of having one instrument adversely affect another. The bass, for instance, could add undesirable pumping to the vocals. It is precisely to combat this issue that the following method has become so popular.

This technique is named and pioneered by Michael Brauer, the famous engineer behind Coldplay, Dave Matthews Band, John Mayer, and more. He, like all great engineers, has changed his setup over the years (he actually used three buses at first), but here’s the gist:

Michael reckoned that if he fed elements of his mix into an applicable submix, he’d have the ability to shape the tone, feel, and rhythmic bounce of his mix in a way that always hit an audible sweet spot. Upon divvying up tracks and outputting them to different submixes, he quickly saw he could achieve (and retain) clarity, punch, bounce, and heft; it also helped in achieving loudness, as elements were smartly tamed—compressed, but not spiky. In this way, headroom could be preserved.

The original Michael Brauer Method involves, among many other things, four submixes grouped together by instrument function. The foundation (drums and bass) would get its own bus, while the center of the record (guitars) would get another. It went on in this manner, though it changed from time to time (for a fuller picture of his technique, I advise you to peruse this Tape-Op interview he gave some time ago, and this dissertation on how to implement his methods in the box).

The benefits of this method include a finer—but not too fine—point of control when balancing elements; you need not hunt around for submixes when there’s only four of them. It’s a good balance between the chaotic ramble of no submixes and the confusing panoply of too many submixes. If you’re working on a compatible board, it’s a great way to keep trucking, and if you’re using a summing mixer, this method is perfect to suit the eight-in, eight-out box you may commonly find at lower price points.

In this technique, you might see an SSL-style compressor kissing the needle on the drum-bus with a slow attack and a medium-to-fast release (or auto release, depending on the song); you might also see, on the music bus, some broad-strokes EQ, and in some cases, a little widening to move elements away from the vocal. Compression is usually employed throughout the four buses.

I must confess, however, that I’ve had problems with this technique when it comes to the bass. It doesn’t work for me when low-end information is committed to the drum’s processing, and likewise if it’s relegated to the music bus. Inevitably, the lows will fight some element in either bus, and I find myself wishing the bass had its own channel.

Which brings us to our next method:

These days, with practically infinite busing in DAWs, limiting oneself to four buses feels more like a Spartan exercise than a necessity. Many engineers have evolved their own submix templates over the years, often changing their workflow depending on the project. For example, if I’m working in post production, I’ll use a submix structure quite different from my musical approach. In post, I might have buses for:

As for music, that can change too—and it can evolve. These days, I run my submixes in the following manner:

I like this template because it gives me dedicated control over different elements of the mix, a simplified way to gain-stage, the choice to compress certain elements, and the ability to use others as simple global faders. Also, automating becomes much, much easier with these buses.

However, there are other permutations. Sometimes I lay my effects submixes alongside their corresponding instruments, so they can be ganged and muted easily. Like so:

In this case, all of the effects buses would be routed ultimately to “All effects.” Yet they’d be grouped with their corresponding instrument buses so I could mute/solo them together.

So if I want to mute all the vocals and vocal effects, I could do so quickly without muting the drum effects. Organizationally, this approach had a lot going for it, but these days I favor the precious template.

Each arrangement of submixes has its benefits and drawbacks, so I’ll often decide which structure to use based on the number of elements in the song, how ambient it might be (and how many effects channels the mix would necessitate), or simply by intuition.

The sky is the limit here, and personal preferences abound. For instance, I like to have separate submixes for my parallel processing, but you might not. And sometimes I don’t either! Sometimes I like to send a squashed kick track right back into the drum submix. The ability to do both is freeing.

You can also get really creative with submixes. Here, for example, is a template I’ve sometimes used for live mixes, to reconstruct the feeling of a live venue:

This was a psychological enterprise more than anything else, but it worked for me. The idea was to recreate the atmosphere of being at the venue, as few can deny the special magic therein. This template reflected my attempt to recreate a venue sonically, through a series of equalized, counterbalanced-balanced effects buses.

For the most background of effects (i.e., stuff that would “linger” at the back of the stage”), I’d slap an EQ on that submix, roll off some highs and lows, and then lower its fader down into the mix. As we got closer to the foreground, the submixes would retain more lows and highs, and the level would come up a bit too. Then the effects buses were grouped, so i could change their levels all at once.

Stuff behind your head was just a cheap widening trick (flip the left and right channel and put the right out of phase) with a little bit of verb, all mixed subliminally low.

So when I wanted to have the feeling of the guitarist’s stadium-solo soaring over your head, I’d orchestrate the reverb or delay to hit swim between the medium-ground and foreground submixes, and throw some of it to the “behind your head” submix as well.

The method may or may not work for you. The point is to open your mind to the possibilities of what submixes can do for you, if you allow yourself to think of them as the solution to a puzzle.

Here’s the submix I mentioned up top. I call it the extra bus, though some of my colleagues call it the “more” bus. Its concept is simple:

Any time you want more of something—more of your drums, more of your guitar—you can automate sends from the applicable submix (or instrument) straight to the extra bus. As long as your DAW’s delay compensation is working, this is a handy way of increasing apparent level without too much level automation. It saves you time, you can use it to route around compression if need be (from individual instruments), and it can fatten up your overall sound in key moments of the arrangement—so give it a go!

Do you have to use submixes? Of course not! Some mixes would absolutely fall apart under all this comp-pressure! But their benefits cannot be overlooked. In addition to processing, the functional aspects are quite powerful: automating whole groups of instruments at a time on a single fader can do wonders for your CPU load.

However you decide to proceed with submixes is ultimately your decision. It is my hope, though, that this article has given you some insights into how they work, when they work, and some creative ways to use them.