What separates a good mix from a truly great mix? Follow along as Geoff Manchester shares factors that can take a muddy and dull mix and turn it into a mix that captivates listeners and captures the professional sound you’re looking for.

Try these mixing tips in your DAW

Get your copy of RX, Tonal Balance Control, and Insight to start getting better mixes faster—all included in iZotope's Music Production Suite.

First, let's address the obvious: the difference between a great and not so great mix might be more of a subjective call. We all have our personal tastes, and sometimes our love for a song has more to do with the songwriting or the person who shared the song with us, or the place that we were in our lives—rather than the mix itself.

For example, I love the album “Bee Thousand” by Guided by Voices, but you could argue that the strength of the inventiveness and creativity in the songwriting is what carries that album more so than the mixes themselves. To narrow things down, let's focus on songs that have great mixes and commercial appeal, such that they might show up on the radio or a popular streaming playlist.

And speaking of playlists, you can check out a playlist that we put together of some of our favorite mix reference tracks at iZotope.

Great ingredients lead to a great mix. It's all about the good rule: good singer, good performance, good microphone, good cable, good preamp = good result. Multiply that across all aspects of the production, and you've got the recipe for a great mix.

However, it's also commonplace to replace or enhance certain elements in a mix. You might have heard the term “sample replacement,” or sample enhancement. This is the practice most often deployed on drums of replacing or enhancing elements of the drum kit that were recorded acoustically. If you want to learn more about this practice, we made a video about sample replacement and enhancement in the metal genre on drums.

Ideally you're using samples to enhance or replace what's already there to fit or conform to the standards of a certain genre, but ultimately, great mixes are a combination of great performances by great singers or instrumentalists that are all pulling in the same direction. Ask any mix engineer, and they will tell you a well-recorded, great sounding song makes for much less work in the mixing stage. So it's so important to start with a solid foundation if you want a mix that leads to greatness.

The odd mouth click or pop might reel the listener in and make them feel like they're in the room with the singer in a very intimate way. But more often than not, plosives, lip smacks, sibilance—these are things that distract the listener and take them out of the spell that a great mix can put them under. In the 60s and 70s, clicks and pops crept into the recordings. It's just the way that it was. But now these noises, unless part of an overt stylistic decision like including vinyl clicks and pops and crackles in a driven record, are largely considered faux pas in modern music production.

What's worse, given how much dynamics processing is employed in modern music production like compressors and limiters, those noises, clicks, and pops really shoot to the forefront of a mix. You should use tools like RX to solve those problems before they get pushed to the forefront of the listener. And remember, most folks now are listening to music on headphones which funnel the audio directly into your brain, so folks really notice what you've forgotten to take care of.

Looking for more tips with RX? Check out this video on using RX in music production.

A great mix is one that takes you on a sonic journey and makes you forget about everything going on in your life. But what does that mean, practically speaking? Well, careful management of track elements from verse to pre-chorus, to chorus back to verse, can help keep listeners engaged and keep them on that journey. Not to mention, using volume and panning automation to keep the listener engaged and to highlight special moments like a complicated, but impressive bass lick, or a really interesting vocal chop—all that stuff is ear candy that makes the listener want to start the song from the beginning, and experience all that stuff all over again.

A great mix really takes advantage of contrast, so this might mean leaving some things wet with reverb and others bone dry. The way the verses close and the chorus is spread open is another example of how a mix can grab you by the collar and take you for a ride.

Some things you can try: Try to limit the amount of vocals in the verses compared to the choruses. So if you have a session where the singer has recorded whisper vocals, high and low doubles, keep those whispers and doubles hidden in the verses until you get to the chorus, and then you can really have them explode to create impact. Or, use reverse reverb or other tricks to pull the listener in at the beginning of a new verse. You can watch some of these tips in the video below.

A great mix doesn't have anything that's too compressed or too dynamic. Nothing should jump out at you. You should really be monitoring levels between drums, guitar, and bass, and make sure they meet a similar kind of dynamic flow. There shouldn't be any reason for someone to turn your mix down because something jumps out. If anything, they should be cranking your mix up.

Tools like master bus compression glue can help in this regard, as well as keeping an eye on individual instruments and subgroups, or VCAs if you happen to use those. Also, a great mix is tonally smooth and well balanced from low all the way to high frequencies, such that if you were to notch an EQ filter and sweep around from 20–20K Hz, you wouldn't run into any egregious resonances.

A great way to keep an eye on the dynamics of your mix and its tonal spread is with Tonal Balance Control. Park that on your master bus, choose a target and then head to a chorus and loop it to see how your track stacks up. In fact, as an example I have “Take My Breath,” a song by The Weeknd loaded up here in Logic being measured against the pop target in Tonal Balance Control.

You can't hear it, but I’m looping the chorus. Notice the overall conformity of energy along the lines of the pop target. In both views, we can really see a healthy distribution of energy across each frequency bracket, not to mention a very stable crest factor in the low end, meaning low end information isn't too compressed or too dynamic. It's just right.

Some people like to be very conservative with their panning and other people like me like LCR panning, which means having things either directly up the center or all the way to the left or right. You can think of this as having everything at twelve o'clock, or three, or nine o'clock.

Whatever path you pick, there's nothing worse than ignoring the panoramic canvas that left and right channels provide. What goes where is up to you, but it's important to build something across the stereo field that you're given.

Putting everything up in the middle might seem like a good idea for power and impact, but for the listener, having everything pushed up against the glass might feel claustrophobic or boring, given the lack of dimension.

Now keep in mind, some dance music is programmed for playback impact on mono systems, but I think we can all agree that what dance music may lack in stereo spread, it more than makes up for in really interesting and exciting arrangement choices. Conversely, if what you're after is a super wide mix, then panning is essential. But remember, if everything is everywhere, then nothing is anywhere. Pick what's going to take center stage, but also what's going to support it stage left and stage right.  But also, what's going to support it back to front.

Back to The Weeknd’s example. If we head to Insight's sound field meter, we can see in the chorus we've got bursts of energy on the sides occasionally. That's the crash cymbals and super wide backing vocals.

Crash cymbals and wide backing vocals create bursts of energy on the sides of the sound field meter.

But otherwise, we're largely right up the middle with main vocals, drums, palm muted guitar—all within the 11AM to 1PM range if we imagine are instruments according to that invisible clock that I mentioned earlier. 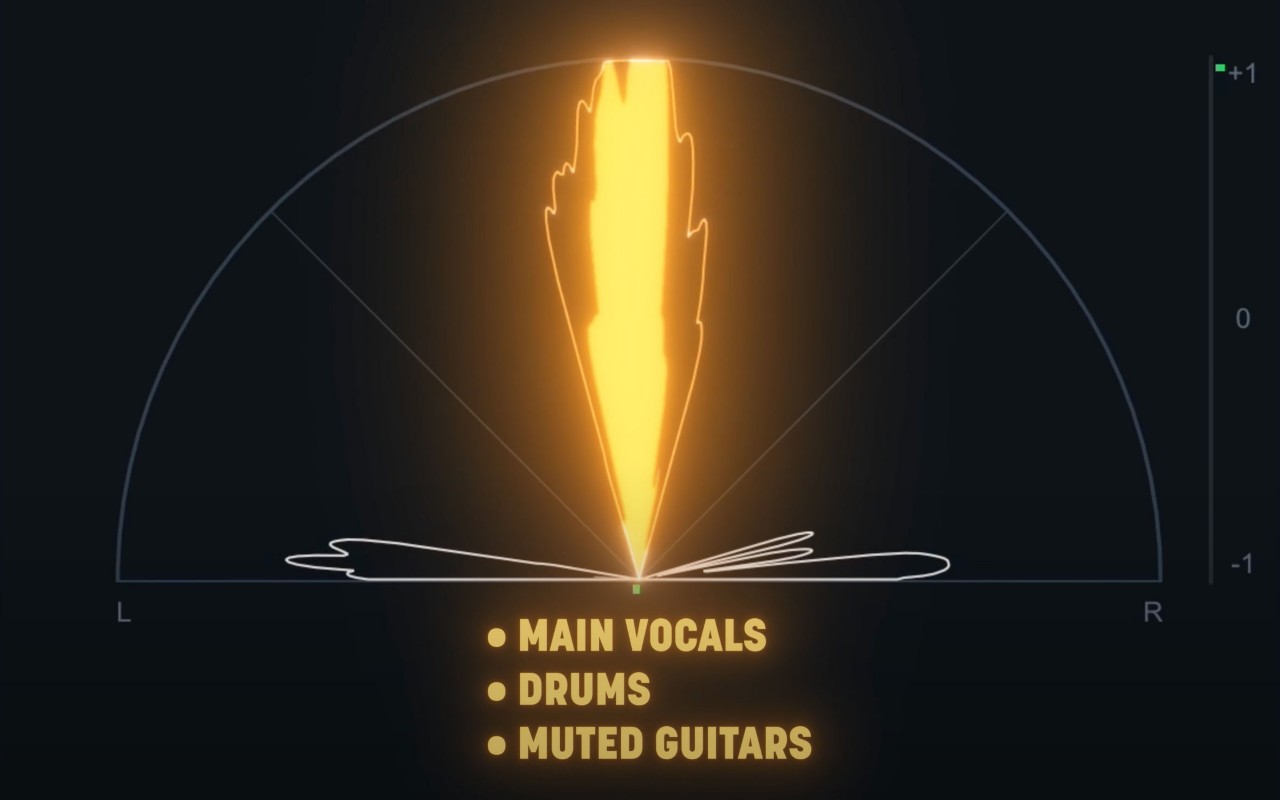 Main vocals, drums, guitar are up the center of the sound field meter.

Keeping in mind what I said about the stereo spread, it's really important to make sure that your mix plays back and sounds great on mono devices. Some smart speakers, phones, tablets, even club environments, are still mono playback. So if your mix falls apart in mono, well, it's not a great mix, is it?

You can keep an eye on mono playback compatibility using that sound field meter that I told you about in Insight, but you can also always switch to mono on tools like Relay, Neutron, and Ozone. You want to make sure that the most important and impactful parts of your mix persist in mono like vocals, kick drum, snare, bass, guitar, and to some extent important guitar parts, or parts on a keyboard.

Turning on mono capability in iZotope Relay, Neutron, and Ozone

I hope these tips were informative and will help you create your next great mix. Are there great mixes you want us to know about? And in what other ways can a mix be truly great? Let us know on social media, and get your copy of Music Production Suite that includes even more mixing and mastering plug-ins for your projects.