Mixing guitars can feel hard sometimes. You’ll hear many good guitar recordings on albums, and yet when you get guitar tracks in for mixing, you can find yourself scratching your head: how do we go from lackluster tones to epic sounding riffs? Whether it’s how to mix distorted guitars or how to make guitars sound bigger in a mix, we’ll show you how in this tutorial.

In this article you’ll learn:

Follow along with this tutorial by getting your copy of Music Production Suite, giving you access to RX, Neutron, Relay, and more.

1. Use RX De-noise for getting rid of amp hiss and other issues

In this age of recording at home, sometimes recording engineers butt heads with issues that are particularly thorny. I’ve noticed an uptick, for instance, in the amount of extraneous noise in guitar recordings, usually stemming from the limitations of power in home recording versus a recording studio.

I imagine this fact had something to do with the invention of Guitar De-noise in recent iterations of RX. And yes, the module is very useful for removing issues endemic to amp noise, pick attack problems, or fret-board squeaks.

Most of the time, however, the best tool for the job of polishing home-recorded guitars continues to be good old fashioned Spectral De-noise. One reason it’s great for removing the hisses often heard in home recordings is because you can tune it to pay attention to the higher registers, where the noise often subsides, and to ignore the meat of the instrument. The result can be an artifact-free performance.

Observe this snippet of a recording:

Guitars in a Mix

This is from the fantastic jazz project Ginger’s Palace, a song called “Petew.” You’d never know the guitar has been de-noised, but it has, and here’s the setting I used: Note the reduction curve employed: it’s super high on the lows and mids, and very low on the highs. This, in effect, trains the algorithms to ignore the meat and music of the guitars, and just stomp out the preamp noise. It’s a wonderful tool that works on both acoustic and electric guitars alike.

Learn more about how to mix different instruments from drums to vocals with our mixing tutorials.

2. Use Relay, Neutron, Nectar, or Ozone Pro for widening guitars

Guitars are often a mono source, and yet we are frequently looking to make them feel wider. This can be done easily with no effects if your guitars were recorded with stereo mics. If not, we have a bevy of tools at our disposal.

Common width techniques for guitars include: doubling them with a specific doubling plug-in; duplicating them to two tracks, panning them hard left and right, and time-delaying one track by a few milliseconds; the previous tip with the addition of pitch modulation; and frequency manipulation.

iZotope provides tools for all.

For multing to two tracks, hard panning, and delaying, we have Relay—we don’t even need to mult the tracks! Just instantiate a stereo version of Relay on the guitar track, and you can delay one of the channels, like so: 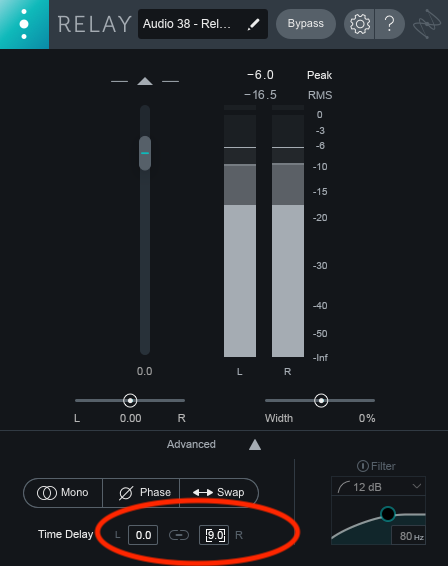 Instantiate a stereo version of Relay on the guitar track, and you can delay one of the channels

A guitar with this effect applied might go from this:

For delay plus pitch, Nectar comes in handy, particularly the Chorus mode in the Dimensions module.

Check out this little preset on the same guitar example: Add delay plus pitch on guitars with Nectar's Chorus module

Neutron has its own little width slider, which gives you this effect pushed a hundred percent wide: But for artificial width, I often like to use the imager in Ozone. This is a setting I used recently:

But that hardly shows you what this might sound like in a mix. In the song Peter, again from Ginger’s Palace, I used the above setting on a guitar that answered the main melody. You can hear a snippet of it here:

Widened Guitar with Ozone in Mix

The guitar can be played all sorts of ways—it can be plucked, picked, slapped, hit, and more. The intensity of the attack changes with each style, to say nothing of how each player sounds unique by virtue of being a unique individual.

So, every once and a while, you run into a part where the sound of picking, plucking, or slapping the strings can be too aggressive. There are a few tools for tamping down unwanted pick or plucking noise.

The first, of course, is Guitar De-noise in RX, which has its own section purpose-built for dealing with pick noise: 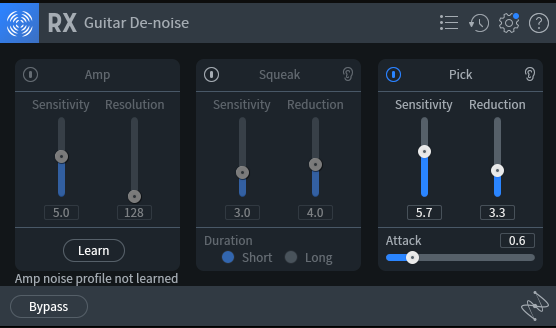 In my own uses, I find this tool is better suited to overtly problematic guitars, rather than tracks that need only a light push in the right direction. Subtle problems need subtle fixes. Sometimes you just need a touch of the solution.

A great tool for the job is iZotope’s Transient Shaper found in the Neutron module. This Transient Shaper distinguishes itself from the competition in a key way: it gives you three independent bands for frequency-specific implementation. Knowing that pick attack is normally in mid to high frequencies, you might want to leave the lows and low-mids alone. In the image below, note a few important parameters: 4. Use multiband expansion with dynamic EQ for pick attack

Sometimes the opposite problem exists: we want a guitar to sound more picky, more funky, more articulate. Here my favorite trick is not the Transient Shaper, because that can sound harsh for this purpose.

Instead, I prefer a dynamic EQ in expansion when the part is being played.

First, we locate the frequency range where the pick attack is. With my ears, I pinpoint a bell at around 2.2 kHz

I set a dynamic boost to push up when it detects this frequency: 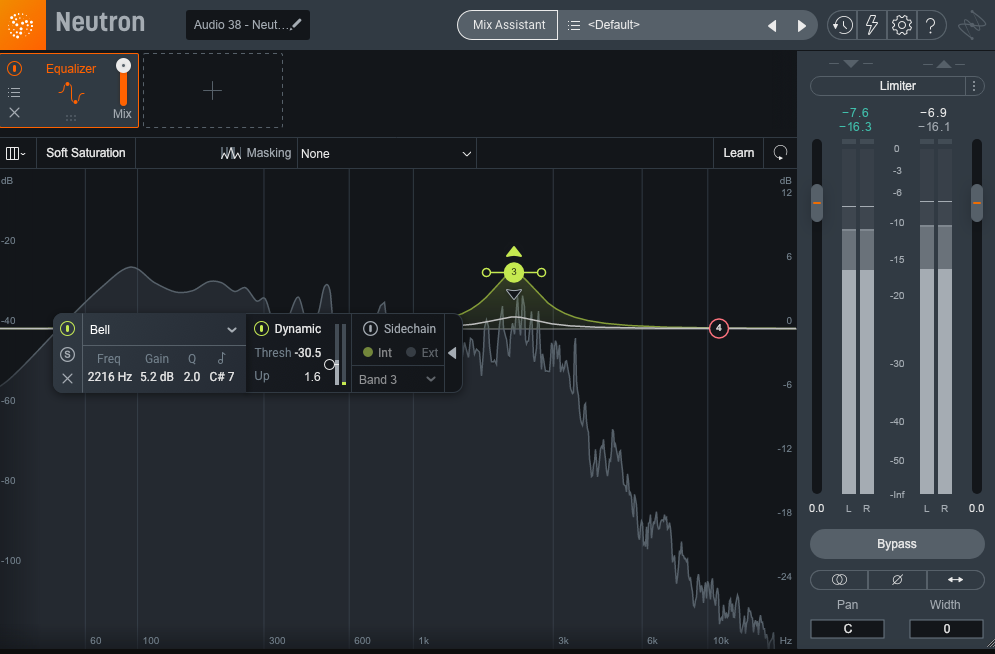 But we’re not done. We also want to tame the low mids to really highlight the upper midrange of the pick attack. We do this with a dynamic cut that is sidechained to the pick attack’s boost: Sidechaining a dynamic cut to the pick attack's boost in Neutron

Now, the same range that’s telling the dynamic EQ to push up is also telling the EQ to push down in the low mids. They are tied together, in other words. It sounds like this:

Guitarists hop around the fretboard like it’s made of lava; they never stay in one spot for very long. The problem with this is, fingerboards can be wildly inconsistent: some instruments produce dramatically different levels at different frets. Sometimes, it’s a zone of just one or two frets on the low string that yields a noticeably louder sound and with more low-end than sounds appropriate.

Neutron's dynamic EQ allows you to control those resonant low frequencies without removing them throughout the entire performance.

The image below shows the Equalizer in Neutron Pro with Band 1 set to attenuate a narrow frequency band centered around 100 Hz, where a particular note is a little out of control. Since it is in Dynamic Mode with its sidechain assigned to the same frequencies, it only attenuates those frequencies when there is a sharp increase in their level. Band 1 set to attenuate a narrow frequency band centered around 100 Hz, where a particular note is a little out of control

6. Use Multiband Exciter to add body and presence to guitars

Thin, wimpy, distorted guitars can ruin what should be powerful rock riffs. Many guitarists and engineers pine for the low-end magic of analog tape and the midrange harmonics of tubes. Not only does the Exciter in Neutron offer different styles of harmonic emphasis (tape, tube, and more), it also offers them independently for each band!

The following image shows band 1 applying 8.5 dB of tape-style saturation to the low frequencies below 319 Hz, while band 2 is adding 4 dB of warm saturation to the mids between above 319 kHz, with a mix of 81%. 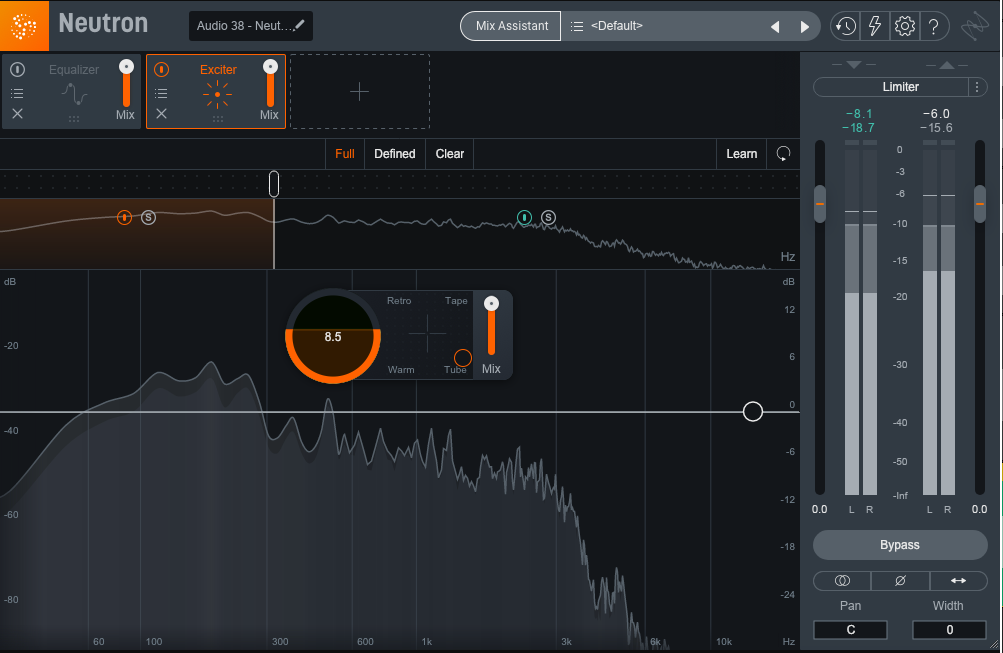 Not only does the Exciter in Neutron offer different styles of harmonic emphasis (tape, tube, and more), it also offers them independently for each band

7. Soften up guitar sounds with either a de-esser or sculptor

In the world of direct recording and amp simulations, acoustic and electric guitars often come out sounding brittle and unnaturally harsh in the top end. However, if you simply cut some highs, the tone can become too dull.

What if we tried a de-esser? Sounds crazy, but de-essers have been known to work for just this issue.

Now, I’ll put it through an unflatteringly harsh amp sim.

Let’s see what happens if we use a de-esser. I’ll use the RX De-esser, which has spectral shaping. Spectral shaping, especially tilted to white noise, comes in real handy here. Observe: It still sounds like the same instrument, but play it back against the previous example: you’ll notice a less annoying nasal fizz to the sound. This is what a de-esser on a guitar, used well, can get you.

Another tool that can come in handy here is Neutron’s Sculptor. Observe how i’m using it here:

We’ve reigned it in so it’s only affecting the bits of the spectrum we want. We’ve chosen the Distorted Electric profile, and we’ve eased back on the tone wheel. All of this shapes the sound into something less stinging on the ear.

A third option: you can gently filter out some high frequencies and use the slightly mellower tone to feed the creation of more musically-pleasing harmonics.

In the first image below, the Equalizer is set to do nothing more than reduce some high frequencies via the low-pass filter. In the second image, the Exciter is placed after the Equalizer and utilizes the third band to add some harmonic excitation blended between tube and tape styles. 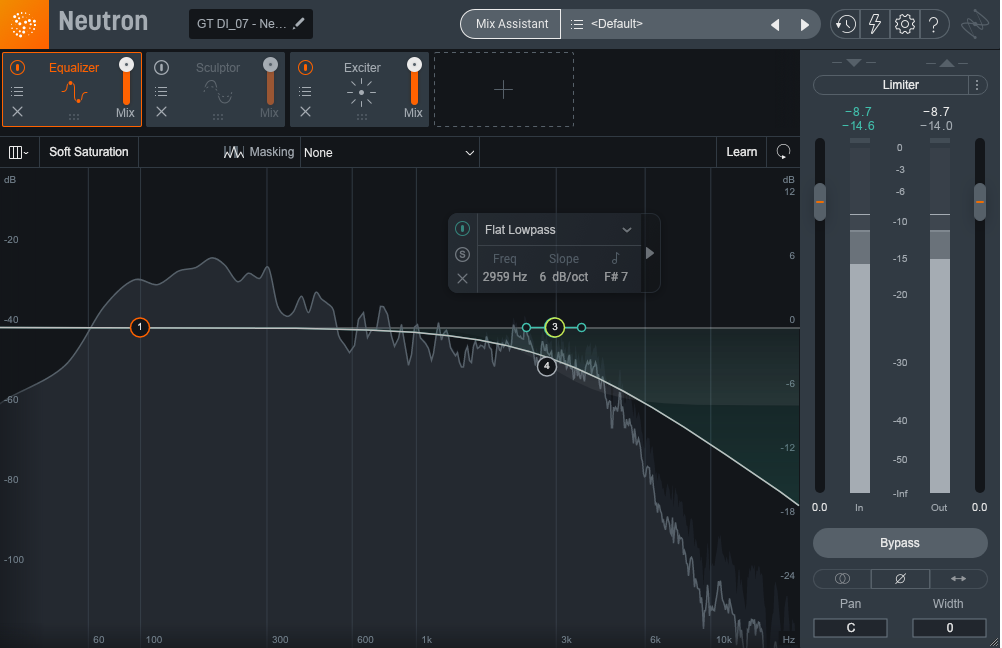 Gently filter out some high frequencies with Neutron's Equalizer module Guitar with EQ and Exciter

With the right approach and a little scratching of the surface, you can use any number of tools available iZotope's Music Production Suite to do anything you’d need to fit a guitar into your track. Due to the drastic variances in guitar tone and dynamics from artist to artist, track to track, and part to part, you need flexible and capable processing. There are no presets here, just starting points. Enjoy!