Learn how Vinyl can add flavor to music productions in any genre.

I’ll never forget Vinyl—my first iZotope plug-in, when I was but a wee engineer. It was perfect for sound design, because the vinyl sound never goes out of style: from vintage hip-hop to weird mood music, there’s nothing like the scratch of a needle to set the particular scene.

Vinyl just got a reskin for the modern age, so we thought it would be fun to reintroduce it to you, and to your productions. We’ll cover some obvious use-cases here, but then we’ll dive into some more esoteric fare. I think you’ll be surprised just what you can do with this (free!) little plug-in.

1. Give your hip-hop intros a vintage vibe

The warmth of vinyl pairs well with vintage hip-hop, possibly because hip-hop has a long and storied history of sampling vinyl records. That’s why adding the sound of vinyl to your hip-hop loop evokes a classic sound so effectively. If you’re sampling a piece of music that you got digitally, but you want it to display that classic vinyl gloss, you can run the loop through Vinyl, then adjust the various wear-and-tear settings to sell the effect as vintage.

I’d also like to show you a way to use Vinyl to call attention to contrasts in sections of your arrangement or mix. Observe the beginning of this loop:

It gives me some rainy-day energy that lends itself well to some vinyl-ification. Since this is a stereo master I made, I can take the file and make the following edit:

The intro is processed through Vinyl, the rest isn’t. I’ve also flown over a region of the loop to keep it out of conflict with the big bass notes heralding the drop, and I’ve adjusted the fade to occur after the beat enters in full. Here’s the result:

Adding contrast with Vinyl like this can be an effective way to build tension towards a dramatic moment, or an interesting way of changing up the tonal palette in an otherwise static mix.

2. Give your rock drum submix some character

A good rock drum sound is often dirty; distortion and saturation can help to achieve that rule-breaking, larger-than-life sound. Since Vinyl has such a classic timbre, you can use it to secure an impactful and character-driven tone. Observe these rock drums, with no EQ, little compression, and nothing in the way of time-based effects:

Now observe what happens with Vinyl. I’ll drive the input stage by 4 dB, choose the 2000 algorithm for minimal high and low filtering, go with 78 RPM for fidelity, but hedge those bets with 51% warping for luscious imperfections. I’ll also add about 28% wear, and adjust the output gain down to roughly level-match where we started. You can hear how those settings give us a full-throttle sound. It’s almost like an “all-buttons-in” approach. But it’s not! Instead, we have comprehensive tonal shaping, sculpting that at once feels old (because it’s retro) and new (because you don’t usually hear the hallmarks of vinyl until playback).

This might be a bit much for an outright mix, but what if we put the effect on an auxiliary bus for parallel processing?

That is a sound both clean enough to avoid mud, and ferocious enough to do some damage.

A caveat, however: to get this sound, you have to turn the Warp setting down all the way, or else you’ll cause a crazy modulating effect akin to flanging—which brings us to our next tip:

One of the great things about playing recklessly with new plug-ins is the happy accidents you stumble into along the way. In the above drum example, I originally left the Warp parameter going full tilt, which yielded the following sound:

Let me come completely clean about my mistake: what I actually did was run two instances of Vinyl, one on the original drum track, and the other on the aux return. I didn’t know it at the time, but double the Vinyl got me double the “flange.”

Observe the happy accident in its original, truest form:

Now that is a crazy sound. It sounds, in my opinion, much better than many software emulations of stompbox flangers. If I were going for something in the vein of “Life in the Fast Lane”, I might indeed try this plug-in configuration.

This is my opinion, but I believe others may agree: Flanging in the guitar-emulation realm often doesn’t stack up to the on-stage effect, at least not to my ears. Flanging on stage is big, warm, thick, and beefy. When I try to use an emulation in the box, I don’t get that warmth.

It might not be flanging in its strictest definition, but I do get that on-stage warmth and thickness when I use Vinyl this way.

To prove it’s not a fluke, here are some rock guitars, presented bone-dry:

Now, here they are with Vinyl in much the same way as I used the plug-in on the drums.

In this instance, I left the Warp parameter largely alone, but I did tweak Wear. The Wear knob can introduce some distortions which, on a clean sound, might not work for the tone.

Because I’m kind of a geek about these things, let’s see what happens if we take our flanged guitar sound and widen it with the width slider in Neutron.

My oh my, it sure is interesting how well all these plug-ins play together…

4. Give flavor to vocal throws in a moody pop tune

In a recent article about pop reverbs, I gave tips for creating evocative vocal throws, using a song from the band $100 Girlfriend as an example. I excerpted a tune of theirs from a live-stream I mixed, then demonstrated how to use pitch-correction and reverb together to create an interesting vocal throw effect, like so:

We can also use Vinyl to create interesting vocal throws. I don’t think it works too well with pitch-correction engaged (it’s jarring here to mix such differing time periods), so I’ll switch that off. I’ll leave everything else the same: EQ and saturation with Nectar 3 Plus, reverberation with Neoverb, but I’ll add one thing to the end: Vinyl. 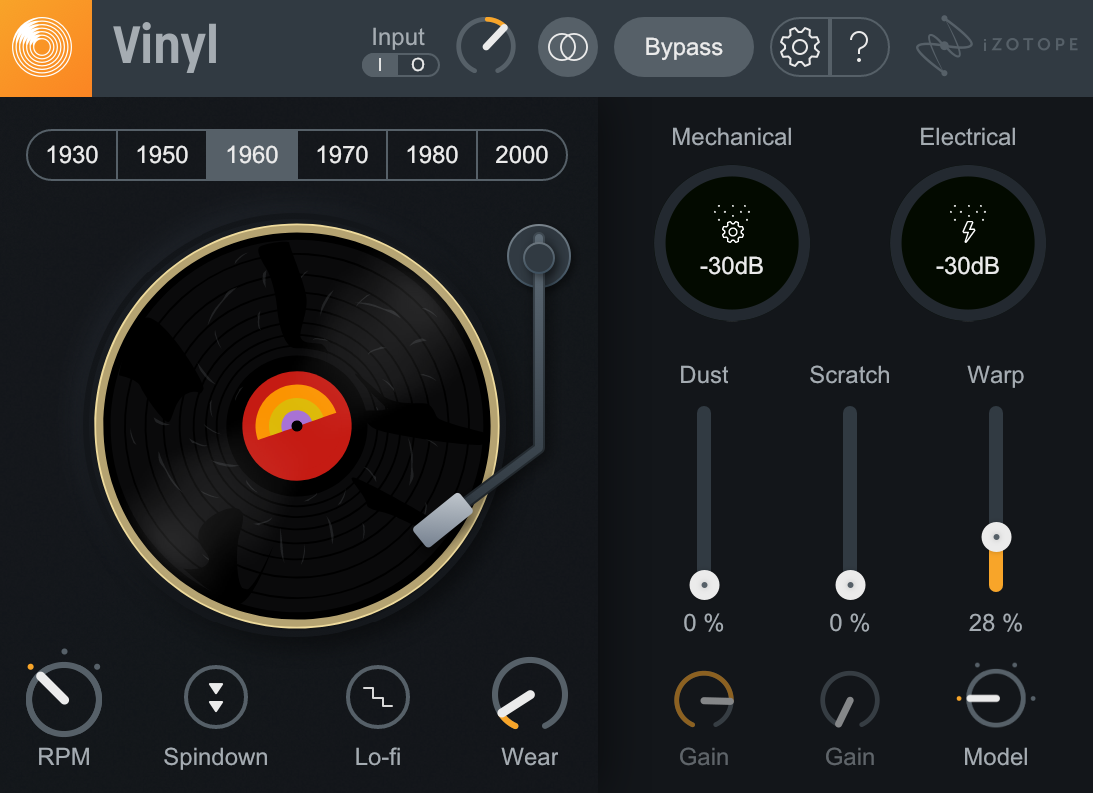 Vinyl on a vocal throw

We’re using the 1960s algorithm there, because it adds a more noticeable filtering on the highs and lows. Also, it will add some vinyl-like saturation. We’ve juiced the input a bit, added some Wear and Warp, and switched the RPM to 33 to make it sound a bit less hi-fi than 45 or 78 RPM.

Hear how this subtle effect suits the mood, and how the effect sits so well in the mix. Here Vinyl makes the perfect saturation addition to the vocal effect.

5. Use Vinyl as a vocal spreader

Let’s say I wanted to take the lead vocal from the preceding tip and spread it across the stereo field. Maybe I’d do this for the second verse as an artistic, creative effect to achieve some distinction.

The list goes on I could add chorusing, an imager like Ozone’s, or a harmonizer such as the one found in Nectar.

These methods would all come with their own sound:

With Vinyl, I have another option—one that might be harder for the ear to figure out on its own. Vinyl on a doubled vocal

On the vocal that I’ve panned right, I’m running Vinyl on the 2000 algorithm at 78 RPM for fidelity, with zero wear, dust, scratch, or mechanical issues. I am using a subtle amount of Warp—only 6%—to give us some gentle modulation. Once this is done, I’m pushing the reverb on the original vocal up a bit to fill in the center. The result, I feel, is a stereophonic effect that doesn’t fall neatly into any of the by-now identifiable camps above.

6. Get an out-of-place element in an electronic production to fit well in the mix

In testing out Vinyl for various genres, I discovered a trick that can help massage an out-of-place instrument in a techno, EDM, or otherwise electronic genre. Vinyl can help heal a sore thumb in such a piece of music, as long as you don’t require the element to exude bass frequencies (Even set to 2000, the filtering in the algorithm will cut out some lows).

Because Vinyl offers a Lo-Fi effect, as well as various parameters that add electronic and mechanical noises, you can take an element which doesn’t quite work and “retcon” it into the mix. Observe this basic EDM loop, which I assembled wholecloth from Apple Loops within Logic Pro X. I did this in an attempt to create the conditions for this example—a generic EDM beat, and an out-of-context instrument.

Right now, let’s just show off the drums and bass.

Sounds convincing enough for a pre-mixed production of this kind. But in hearing the harmonic progression that I fashioned out of cutup bass samples, an idea for a synth part sprung to mind. So, I grabbed a synth and plonked it in. It sounds like this:

The problem here is one of context: the synth part, which could be viewed as harmonically correct, is contextually wrong for the arrangement. It doesn’t fit with the genre. Were I to receive something like this in a mix, I’d consult the producer as kindly as possible about their intent, and then adjust it accordingly with whatever directions and track references were provided.

For the sake of this exercise, I brought in Vinyl, with the following settings: Vinyl on a synth

I used the Lo-fi effect to add a bit-crushing, sample-rate reduction effect, and used other controls to add ticks and scratches to the sound. The result sounds like this:

Now, let’s move onto a bonus example that sits outside of the realm music—though not the realm of sound design:

7. Use Vinyl to sell a record played in the middle of a scene in a video

Imagine a scene where someone throws on a record for their friend or loved one. Maybe it's a Wes Anderson film—say, the beginning of Moonrise Kingdom. Maybe it's another Wes Anderson movie, where some other Salingeresque character can only come clean about their parental issues or class-related ennui in the presence of Cat Stevens.

Now, imagine something else:

Imagine you're the person who has to mix this scene for the movie's release. In addition to everything else you have to do (cleaning the audio, adding the Foley, etc), you also have to get that record to sound like a record.

Here Vinyl becomes a tool worth far more than you paid for it—which, for the record, is nothing. Run the music selection through Vinyl and tune it to meet the needs of the scene. Send it back to the 1930s and add as much mechanical noise as needed. If you put it in the chain before a panning plug-in or a reverb, you can affect it further to sink it into the scene.

Of course, there are more uses for this great free iZotope plug-in. Vinyl really does lend itself to experimentation. And, with experimentation must come the usual warnings about not going too far overboard:

Vinyl can add noise to your mix that you may not want if you tweak the wrong parameter. It could, in a mix of 100 tracks, cause you to hunt around for a while and track down where a noise issue might be. So do remember, when using it, to keep track of how it’s being used in your mix. Otherwise, happy mixing—and enjoy the retro sounds unleashed by this free plug-in!

Learn more about Vinyl and hip-hop: