Clean edits, tonal balance, a brilliant EQ, perfect dynamics, and tasteful ambience—this article is about none of that! Instead we’re going to examine how Nectar 3, RX Elements, VocalSynth 2, and a few bonus goodies, can help you achieve interesting, esoteric, exciting new vocal effects.

If you need quick harmony vocals, the Harmony module Nectar 3 provides the ability to add them. You can pan them however you like, change their level, raise or lower their interval, and even, in MIDI mode, select the very notes they’ll be singing.

Some light processing on the harmonies can be accomplished within Nectar 3 as well, including two-band tonal shaping and time delay. As with the previous iteration, you can solo the harmony vocals only, which opens up a new world of possibilities, as you can now use the Nectar track as a vocal-harmony effects generator in parallel with the original vocal.

You could, for instance, go fully wide with harmonies, have them only kick in for the chorus, and then add reverb to those harmonies for more ambience. You could sidechain the harmonies with VocalSynth 2 for a gloom pop or future pop sound (more on that later).

Conversely, you could go the unison route: doubled vocals can give you a classic widened effect employed on many pop choruses. Want to take it further? Combine two panned unison vocals with saturation, EQ, and some modulation from the Dimension module, and you can whip up an interesting sound that doubles your lead vocal, beefing it up during important sections.

Here’s a bonus harmony tip—one that works particularly well with female lead vocals in a power-pop or rock context: Put on a relatively aggressive compressor. Next, solo the harmonies as your third module in a mono instance of Nectar 3. Add one harmony an octave below the vocal. Now compare the effect to the rest of the track, paying close attention to its relation to the lead vocal.

Edge this octave down to a place where you can’t quite hear it anymore, but if you took it away, you’d miss it. You’ll find you’ll have a vocal that’s quite full and present in the mix, though no one will tell exactly what you’re doing.

You don’t have to relegate Nectar 3 to musical contexts. A spooky, demonic voice can be secured with the Harmony module in a dialogue setting. Simply play with the pitch of the harmonies to elicit an incredibly creepy vibe. Add some modulation and delay to further mess with the proceedings. These vocal effects can work well in podcasts, audio-dramas, radio plays, film, and television.

Nectar 3 also includes a Saturation module that can add that harmonic distortion we always talk about. Unlike Neutron 2 or Ozone 8, this distortion is a streamlined, single-band implementation, useful for imparting a subtle edge in many cases. You’ll also note the integrated filter for low-passing the distortion.

For a grungy tone, you could mix in saturation to taste, and then add delay (a module which sports its own distortion section—and yes, use it!). Mix the delay to taste as well.

The Saturation section is also useful for ameliorating vocals that exhibit the tell-tale signs of comb filtering—symptoms including frequency cancellation in the low-mid range, and weird emphases in the high-mids. Isolate the trashy-sounding frequency in the high-mids, and instantiate a dynamic attenuation from the EQ section. Then, put the band in follow Follow EQ mode. That way, the module can track these harmful nodes and do its best to minimize them. Next, try adding some distortion, either in parallel with the module’s slider, or subtly with 100% distortion. This effect can effectively work to hide the signs of comb filtering.

6. Sidechain and use MIDI in VocalSynth 2

The implementation changes depending on your DAW, but the idea is constant between all platforms: You can play MIDI in a VocalSynth 2 track, sidechain the vocal into the MIDI track, and create all sorts of interesting timbres to nestle your vocal within—not to mention interesting harmonies too. I could write down how I’ve used Vocalsynth 2 to turn bits of sound design into music using this technique, but really, it’s better to watch how something like this is accomplished. So here are two videos that show the process in depth.

Believe it or not, you can use RX creatively, not just for repair issues. Recently I had a direct order from the writer of an audio drama to raise the level of mouth noises on a character, so he could sound more creepy. This was easy to do: all I had to do was bus the vocal to an aux track, add Mouth De-Click, solo the artifacts, and edge it in ever so slightly.

In Elements, sure, you don’t have Mouth De-click. But you do have the original De-click, which can provide some pretty interesting effects if used in this reverse-engineering style. The De-click, in “Output clicks only” mode, can turn your vocal into interesting, staccato, stuttered rhythms that, with further processing, could make interesting rhythmical counter production to your music—especially if the music occupies experimental electronic territories.

Radiohead style sputtering beats, or James Blake style glitchiness could be introduced with this technique—glitches which would be roughly in-line with the vocal rhythm, and thus, feel organic to the track. As a logical progression, you could pair this trick with VocalSynth 2 in MIDI mode to add interesting chords whose rhythms are dictated from the “click track.”

You could use this trick with the Voice De-noise module as well, to great effect. Have you ever soloed the noise-output of a de-noiser and heard how weird it sounds? You can use this soloed output to add strange effects to a vocal, if such strange effects are called for; sometimes a noisy, distorted, wrong vibe is just the thing for a dirty bridge, and you can create creepy, whooshing, and interesting effects by using the Spectral De-noise module in “Output noise only” mode, and using that as a parallel effects track (try this with De-crackle as well).

Elements might not give you Spectral De-noise, and Voice De-noise doesn’t have an “output noise only” function. Nevertheless, you can still isolate the artifacts from Voice De-noise—and here’s how:

Make two copies of your lead vocal. On one of them, use Voice De-noise drastically. On the other track, insert a bypassed copy of Voice De-noise (for latency compensation), and then flip the polarity.

What happens? You’re left only with the noise artifacts, which add character to a vocal. Next add distortion, doubling, or other modulations to take it truly out there. 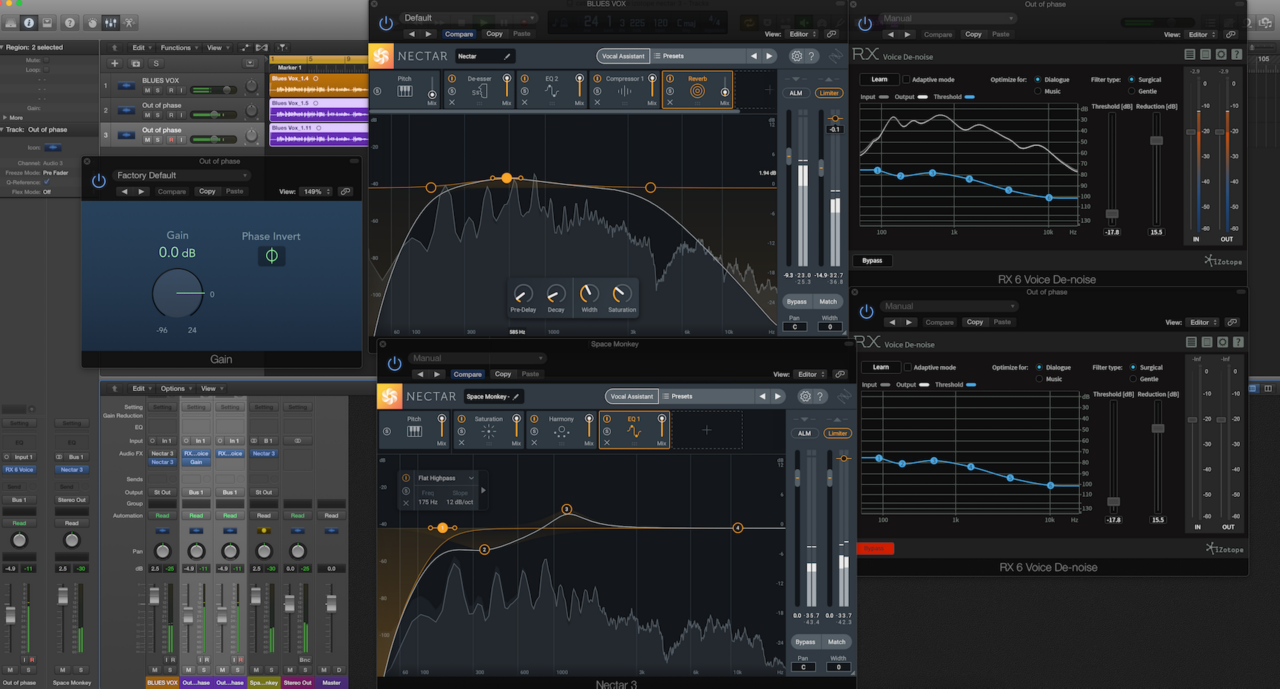 Many of these vocal effects involve “a long way around” approach, or an unconventional use-case for a rather straightforward module. So you might be asking yourself, “why would I take this kind of trouble, when time is of the essence?”

Sometimes we want to obfuscate the common listener and keep our peers guessing. There’s no sweeter feeling than hearing someone tell you, “it took me years to figure out how you got that sound.” Unconventional ear candy like this can keep many listeners coming back for more, and while the simple road can often be the best path, sometimes it’s worth taking the time to try something truly different, especially in the effectual realm. When it comes to the cherry-on-top that is your effects chain, it can be great to aim big—to reinvent the wheel.