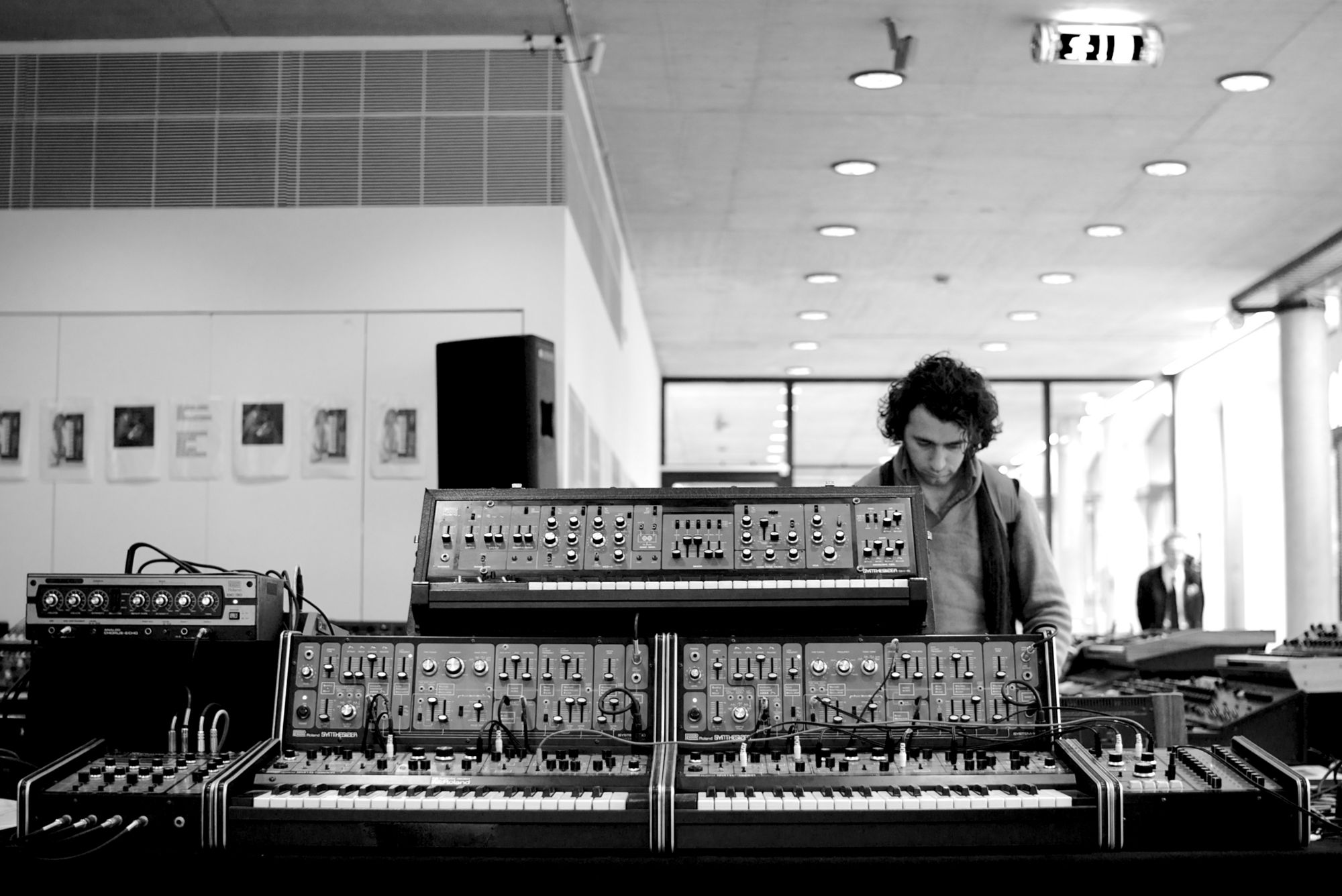 Amazingly, significant synthesizer developments began as early as 1896: there was the Telharmonium, the Theremin, the Ondes Martenot, and the Electronic Sackbut, among others. But it wasn’t until 1970 that Bob Moog—pronounced like “vogue”—built and sold the first widely available synth, the Minimoog.

And we’ve been obsessed with them ever since. The wide range of sonic possibilities offered by synths have made them a crucial part of both modern mainstream and underground music. In the digital era, where access to synths is a matter of clicks, our preoccupation with them is as strong as ever.

But how many of us know how a synth really works? The ability to use synths to produce the sounds you want—and not your VST—is one of the most important skills as a producer. In this article, we’ll cover the basics of how synths make sound, and provide you with some synthesis tips along the way.

Everything to be discussed is applicable to both hardware and software synthesizers, with a focus on the latter.

What is a synthesizer?

Before getting into the nitty gritty of synths it’s important to understand how we hear sound. When something vibrates, the air around it does too. Our ears capture these vibrations and convert them into messages our brain understands as sound.

A synth mimics this process, but instead of a vibrating guitar string or vocal chord, the vibration comes from an electrical signal that can be sped up, slowed down, and modified in ways that natural acoustic sounds cannot. At some point, these signals are amplified, and sent through a speaker as vibrations in the air that we can hear.

All synths have a few basic parameters that allow users to produce and shape sound. Together, these parameters settings are called a patch.

Oscillators (or VCOs) are the basic components of a synth sound. They output repeating waveforms that can be modified using three main controls:

Notice the change in waveshape as the audio plays.

Most synths will give you at least two oscillators which you can (and should) stack together to create unique sounds. Tune each one by octave, semitone, and cent, which is a 100th of a semitone. This building block approach is the basis for additive synthesis.

Some synths, like Iris 2, can use samples as well as oscillator waves to produce sound. This approach allows you to mix a variety of non-synth sounds together and manipulate them with synth parameters. 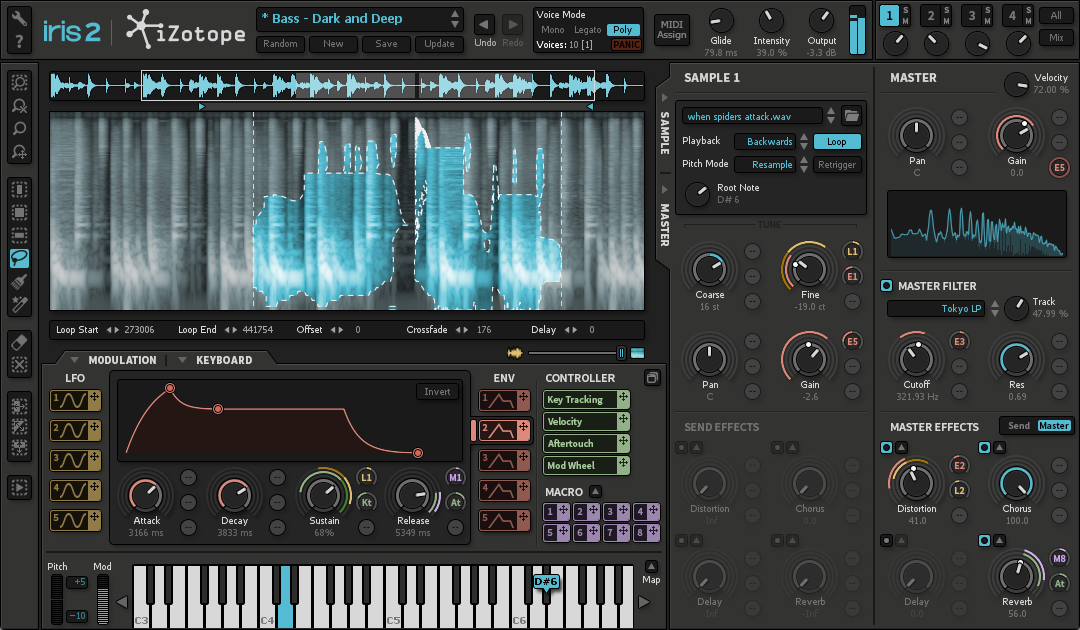 A secondary oscillator, the Low Frequency Oscillator (LFO) is used to modulate other parts of the synth, without making any changes to tone. In fact, it vibrates at such a low frequency you can’t even hear it. Like a primary oscillator, LFOs can take the shape of any of the waveforms mentioned above, and are adjustable by rate. We’ll dive into LFO modulation a little later, but for now, here is the sound of an LFO modulating pitch.

Like any acoustic instrument, the sound produced by an oscillator contains a fundamental frequency (the lowest frequency produced by an oscillation, which corresponds to the note played, for example, 440 Hz equals A4 on a synth) and a harmonic series. Together, these elements make up the unique sonic characteristics of a sound, called timbre. Timbre includes the tonal qualities or colors that make one sound different from another—distinct from pitch and loudness—and is usually described with words like rich, warm, and noisy.

From an oscillator, a sound travels to a filter (or VCF) section, where its harmonic qualities are shaped. There are four common settings: low-pass, high-pass, bandpass, and notch.

Opening and closing a filter is the most basic shaping of a waveform you can do, allowing brilliant, high-frequency content to pass through, then filtering it out for a more mellow sound. The combination of oscillators and the ability to shape them with filters is the idea behind subtractive synthesis, found most commonly in older, analog synths, and Reason’s famous Subtractor.

Filters have an extra control, resonance, which boosts the frequencies around a cutoff point and produces a ringing sound, that when used in conjunction with an LFO, results in a classic filter sweep sound. Take caution—too much resonance will produce a sharp, irritating tone. This example is safe though:

From the filter section, a sound reaches an amplifier or voltage-controlled amplifier,  (VCA) , which determines its volume. Attached to every amplifier is an envelope, which controls how the volume of an amplifier changes over time, using four stages abbreviated as ADSR. These four stages set the path for a synth sound after a key is pressed.

Being able to visualize your synth envelope is central to learning how to program it. Do you want a sound that rises up slowly to build tension? Or something short and snappy?

I’ve used the word modulation a few times now. Simply put, modulation implies that some kind of movement or change is happening with the synth.

Envelopes can be used to modulate just about every synth parameter. This is the most common form of modulation in music production and sound design. Why is modulation important? Because it allows you to design synth sounds with intent. No presets needed. No drawn-in automation either.

Filter envelopes are a good place to start. In Ableton Live, I have two oscillators—a sawtooth and a square wave—enabled with Analog. Here is a synth chord without any modulation:

To add a sense of movement, I set a filter envelope to open the filter frequency during the attack stage of the chord. I also dialed in some resonance to enhance the sweep.

Already better. Remember LFOs? We’ll we can use them to modulate synth parameters too. Here, the LFO is set to pan the synth at a rate of 1/16 notes.

Things start to get more complex once you apply modulation to each oscillator independently. A second LFO is now set to modulate the pitch of only the square wave oscillator. I added in a few more chords too.

Of course, at any time you can change each oscillator’s wave shape to better suit the modulation programmed. Here, both oscillators are switched to sine waves.

When it comes to modulation, the possibilities are endless.

As you have likely noticed by now, there’s a lot to learn when it comes to synths. In this article, I merely scratched the surface by showing you key parameters, a few types of synthesis, and the basics of modulation.

The best way to create great synth sounds is through experimentation. But in order to have some kind of influence over the patches you put together, it's important to have at least a basic understanding of what each parameter does.