As one of our oldest and most beloved plug-ins, it was high time Vinyl got a face lift—and the brand-new Lo-fi feature. In this article, we’ll delve into the history, technology, and music that inspired Lo-fi in the newly refreshed Vinyl, and hear from two of the brilliant minds behind its development: Russell McClellan, and Kurt Werner.

Don’t have the refreshed Vinyl yet? Get it for free today.

Q: Thanks for your time! So to start, who are you and what do you do at iZotope? Do you have a musical background?

K: At iZotope, I’ve been a Research Engineer working in the Research and Development department for just over a year. I used to be an Assistant Professor of Audio at the Sonic Arts Research Centre at Queen’s University Belfast in Northern Ireland, and did a Ph.D. on Audio Circuit Modeling at Stanford University’s Center for Computer Research in Music and Acoustics. At iZotope, I research new digital signal processing algorithms, focusing specifically on virtual analog/audio circuit modeling and artificial reverberation.

R: I'm Russell McClellan—I've been a Software Developer at iZotope for six years. In my time here I've worked on many of our different product lines, including Neutron, RX, VocalSynth, and others. I've been interested in music technology ever since I stopped taking guitar lessons as a pre-teen because I was having more fun making abstract noises with pedals than learning to play scales. These days, I design and build analog synthesizers as a hobby, and occasionally jam with friends.

Vinyl has a new look that fits perfectly with the latest iZotope plug-ins.

Q: Why the Vinyl refresh, and why now?

R: Since Vinyl is free, it's often the first iZotope plug-in that people add to their toolbox. Because Vinyl often acts as a customer's first impression of iZotope, we wanted to make sure that it feels like it's part of the same universe as the rest of the products in terms of visual design and user experience.

As far as why now—we hold occasional events called "iZo Open" where people in the company are given a chance to work on whatever they want for a few days in small teams. This summer, at one of these events, I worked as part of a team on a prototype of what became the refreshed Vinyl. We managed to drum up enough interest to get a “real” project on the roadmap, which is pretty exciting!

Q: What inspired you to develop the Lo-fi feature?

K: I’m always trying to find interesting audio circuits to model. Part of this is seeking out interesting circuits, part of it is thinking about how to hack/modify/“circuit bend” those circuits. I had heard that variations in resistor component value had an effect on the sound of DACs (digital-to-analog converters), so I modeled one of the classic DAC structures, the R-2R ladders, so I could hear for myself.

Russell and Josh [a Sound Designer at iZotope] heard it, and realized that it could fit well with Russel’s proposed new features in the Vinyl update; his idea to model the whole, typical sampling procedure used in classic hip-hop—an LP sampled into a hardware sampler, re-pitched, and played back. The distortion of a sampler’s DAC is an important part of the sound of that process, so the R-2R DAC distortion model fit right in. I’m sure Russell can explain that concept better!

Over the last couple years I've been especially into the sound of late 80s hip-hop records. In many cases, the beats were constructed from recording vinyl into samplers, then using the sampler to play the beats back in different ways. This introduced digital dirt, in addition to the analog distortion of the vinyl.

According to some interviews with the key producers from the era, they would often play 33 ⅓-rpm records at the faster, 45-rpm setting on their turntable while recording the beats into their samplers. This meant that each drum loop would take up less of the sampler's limited memory. To play back the beat, they would use a lower key on the sampler's keyboard to pitch the sample down so that it would play back at the original speed.

This procedure introduces artifacts from the converters used in the sampling and playback, and also from the sampler's re-pitching algorithm. Ever since I first learned this technique, I wanted a single-step tool for emulating the sound of the whole workflow because it involves so many complex steps, and can be a bit tedious. When the opportunity came to work on an upgrade to Vinyl, this seemed like a perfect excuse to work on this idea, since the sound of vintage samplers is so tied to the sound of vinyl records—at least for me. These are the two main ingredients of beats from the golden age of hip-hop.

Kurt had already been working on modeling digital-to-analog converters, which was a natural fit since DACs are an important part of the sound of these samplers. Having that tech available was another reason to make this happen.

Hip-hop - Before and After Vinyl/Lo-fi

Q: What was the most challenging part of developing Lo-fi?

K: I used the Wave Digital Filter circuit-modeling formalism to develop the R-2R DAC distortion algorithm. That’s my main research specialty, so whipping up the algorithm for the R-2R DAC model was not particularly difficult. But that resulted in an algorithm with dozens of controls—every single resistor’s component value in Ohms, plus a control for the number of bits, etc.—which would be extremely unintuitive for a user. 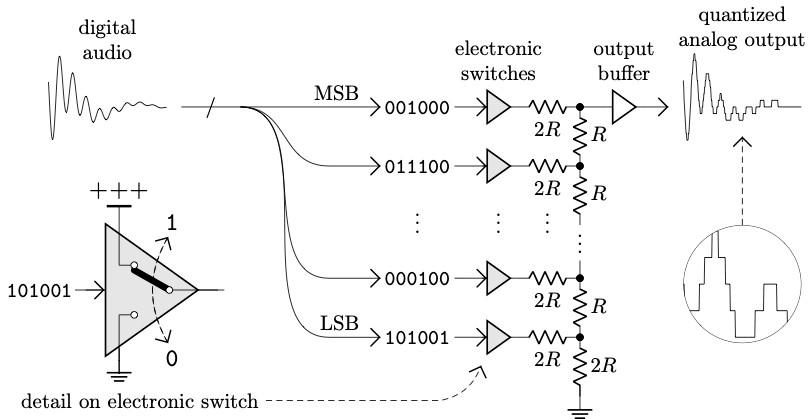 Diagram of the R-2R circuit

K: So, I think the voicing model to set all of those controls in a useful and pleasing-sounding way was the biggest task. I personally spent some time trying to design a small set of “macro controls” to set the resistor errors, and then handed the algorithm off. Russell chose the number of bits in the R-2R ladder circuit as 12 (a nod to the E-Mu SP-12 samplers that are a big part of classic hip-hop sampling) and hand-tuned the other macro parameters until they sounded good.

R: Overall, Lo-fi was a joy to work on: this was a tool I wanted for myself, so it was easy to stay motivated. The hardest part was probably keeping track of all the different sampling rates involved. The audio enters the processor at the sample rate the user sets in the DAW, then it's converted to a different sampling rate to emulate the recording stage of the sampler, then it's converted again to the sampler's playback sampling rate, then [converted] a third time: back to the DAW's [sample] rate.

So, there's a bit of meticulous bookkeeping in the code for making sure all of these different rates line up to produce a glitch-free output (well, an output that contains only intentional glitches, at least).

Q: Now that Vinyl is out in the world—again—how do you envision iZotope users applying Lo-fi to various genres?

R: The way I'm planning to use it myself is to add a unique retro color to drum busses, or even full mixes. I think it'll be right at home in more nostalgic genres like lo-fi hip-hop beats, future funk, and synthwave, but I'm sure there will be uses for it anywhere.

Honestly, I hope users surprise me with creative uses that I'm not even imagining. In a way, the feature itself is an homage to innovative music producers who used samplers to create sounds that the engineers who worked the technology behind the samplers couldn't have anticipated.

Jazz Fusion - Before and After Vinyl/Lo-fi

Q: What’s your favorite aspect of Vinyl as a plug-in?

K: Vinyl sounds great, and gives musicians access to a unique and important sound—for free! What else is there to say?

On a personal note, Vinyl was the first iZotope product I ever used (messing around on GarageBand in high school), and probably also the first plug-in I ever used that did any sort of vintage sound simulation. So contributing my own virtual analog modeling algorithm to this update really feels like coming full-circle. After spending most of my career so far in the academic research world, it’s also the first time one of my virtual analog modeling algorithms is making its way into a commercial product, which is extremely exciting for me!

R: I like the immediacy and focus—[Vinyl] gives whatever you put it on a specific vibe without too much fuss, but there are a fair amount of controls if you want to tweak the sound.

On a personal level, hearing the perspectives of such talented, brilliant colleagues reminds me of the reason I work at iZotope: we care about our craft, and our passion shows in our work. Go forth with the fresh new Vinyl, and throw some Lo-fi on your productions!

Learn more about Vinyl and hip-hop: