Greetings! If you’re here, you’re interested in mixing some rock music. If that’s the case, we salute you—with tips aimed at mixing good ol’ fashioned rock’n’roll. We’re exploring how to tackle your low end, ways to ace the ‘rough and tough’ rock aesthetic, and how to bring emotional impact to your mix. Let’s begin!

Try out these tips in your DAW

I believe a battle exists in many mixes—a battle between the kick and the bass for “Who Rules the Low End.” I sometimes refer to this battle as “the skirmish of sixty and a hundred,” because those are usually the two ranges in question: if the kick primarily sits in the 100 Hz area, using Neutron to duck out a little 60 Hz can help make way for the bass.

This is a generalization, to be sure—and while we’re at it, here’s another:

In the war between 60 Hz and a 100 Hz, let the bass win. Let the bass guitar dominate the low end; it often sounds more appropriate for rock music. To put the kick in the lowest register is a move more suited to more synthetic genres, or music that makes use of 808s and electronic percussion.

This doesn’t mean you should high pass one instrument out of the other’s way. Nothing so drastic is required. Instead, try using Neutron’s EQ in dynamic mode.

Observe the kick and the bass in this arrangement, presented here in a static mix.

We want the bass to dominate the low end and the kick to sit right above it. So, we take our bass and add a slight shelf at 67 Hz with Neutron. 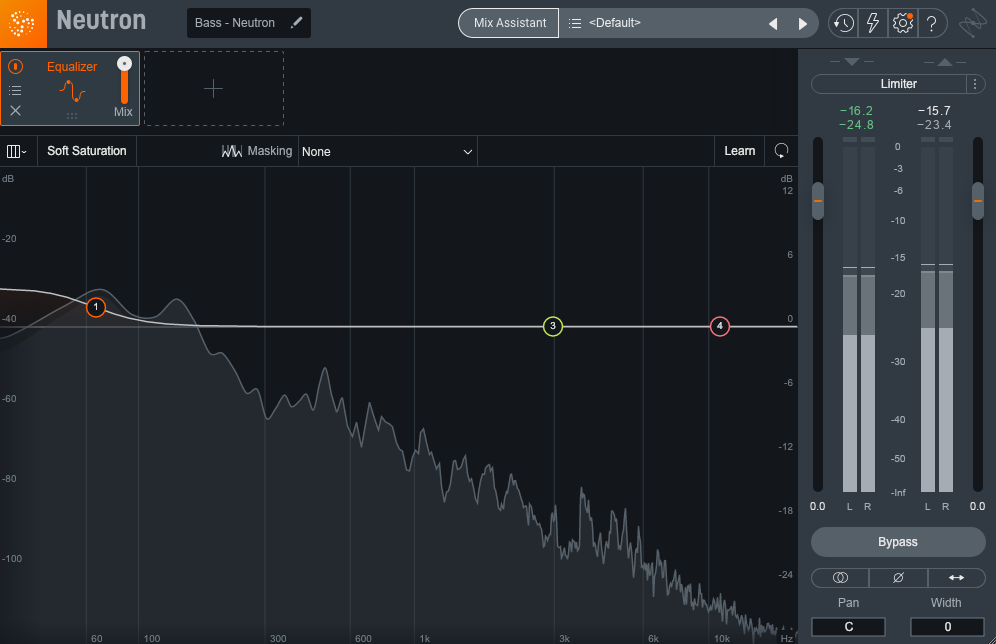 EQ Shelf in Neutron at 67 Hz

We use Neutron’s sidechain capabilities to attenuate 102 Hz whenever the kick hits. 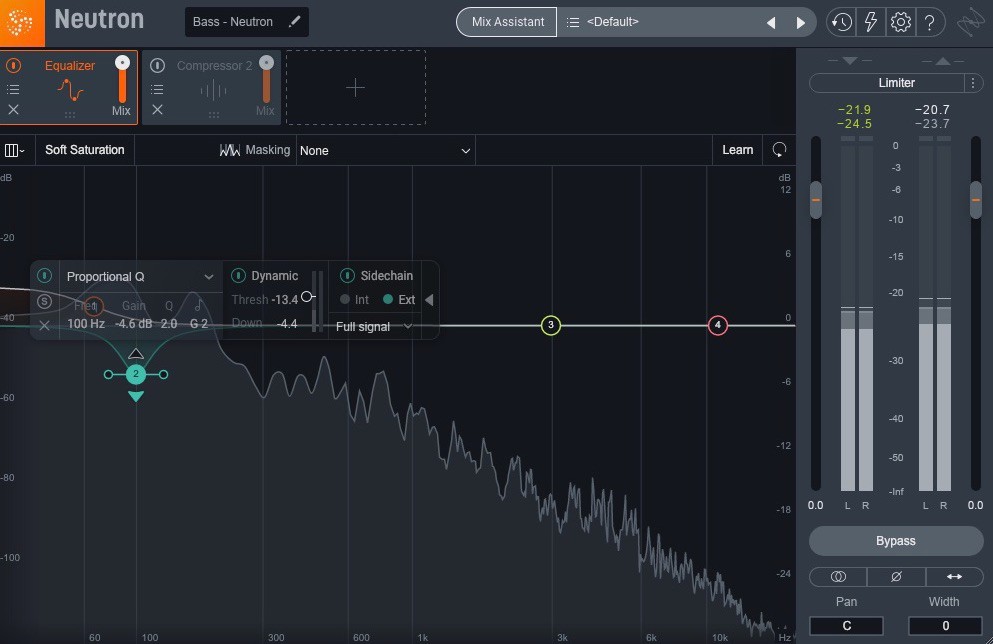 Dynamic cut at 102 Hz in Neutron

The resulting mix lets the kick poke out a little more, without losing too much low end, while letting the bass reign supreme in the bottom:

Kick and Bass with Neutron

2. Mix drums from the overheads out

Every engineer has their own approach, but starting with the overheads works best for me in modern rock. If I go with the other approach, I wind up with a 1970s sort of “deadened” sound (I will still mix from the kick first if that vibe works better for the song, or if the overhead recording was badly captured).

Try starting with the overheads and moving to the room mics. Once those sound fantastic, move on to the spot mics. Then snare, then kick and bass at the same time, followed by toms.

Maybe we mute the rest of the kit, bring all the instruments down, and see how those overheads play on their own in the context of the music.

I decide I want to get some nastiness out of the cymbals, add some roominess, and make the overheads feel subtly larger. I also want the snare to pop more.

This article references a previous version of Ozone. Learn about Ozone 10 and its groundbreaking new features including the new AI-powered Master Assistant, adaptive mastering EQ with the Stabilizer module, and more.

So, I make some moves in Ozone and Neutron to make that happen:

Cutting out some nasty frequencies with Ozone

After the nasty frequencies are gone, I also added a touch of saturation in Ozone. We’ll now restore the frequencies we’ve cut with Neutron. Smoothing out some harsh cymbals with Sculptor 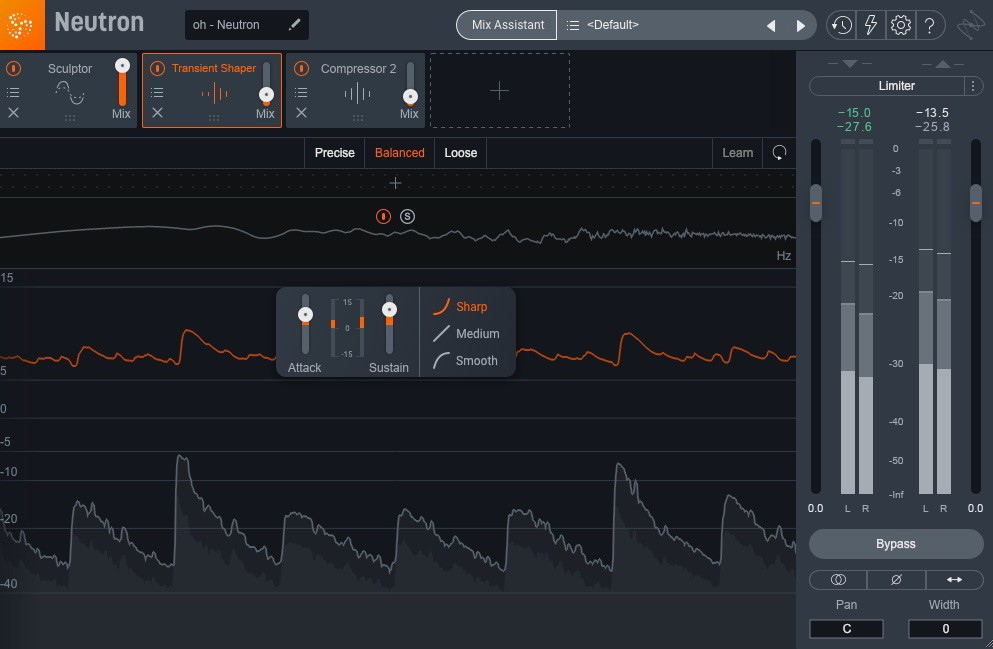 Adding some attack and sustain in parallel with the Transient Shaper

I then add add parallel compression for body and consistency in Neutron, before expanding the snare to bring it out more in Ozone.

From here we move onto the room mics.

The room is sounding a little papery, so let’s fix that. I also want more sustain, less harshness, a smashed feel, and more ambience. Here are the moves in Neutron: 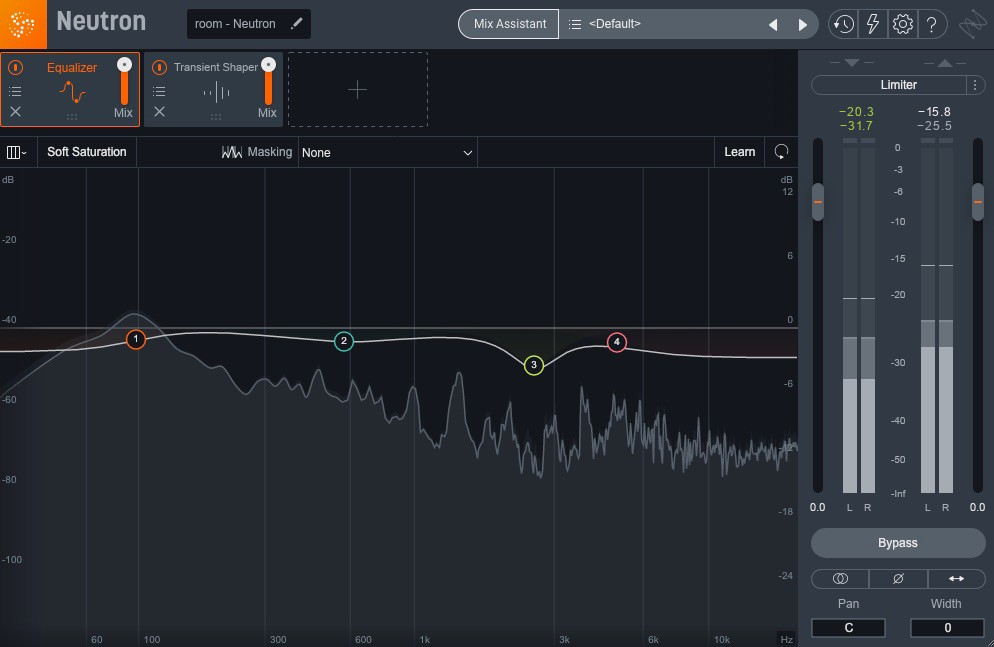 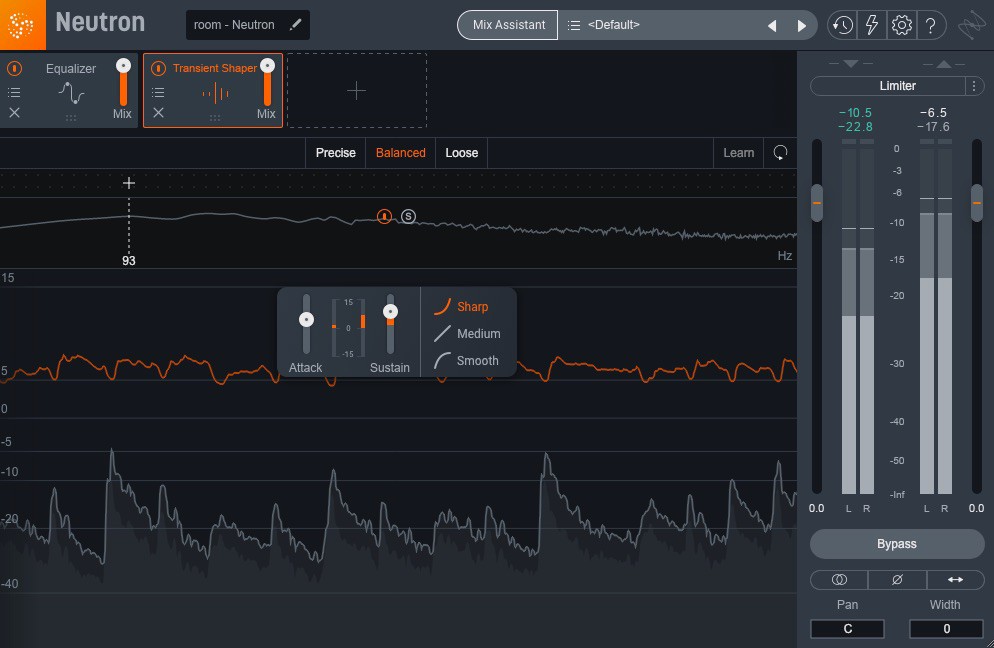 Beefing up the sustain with Transient Shaper

Followed by additional moves in Neoverb and Nectar: 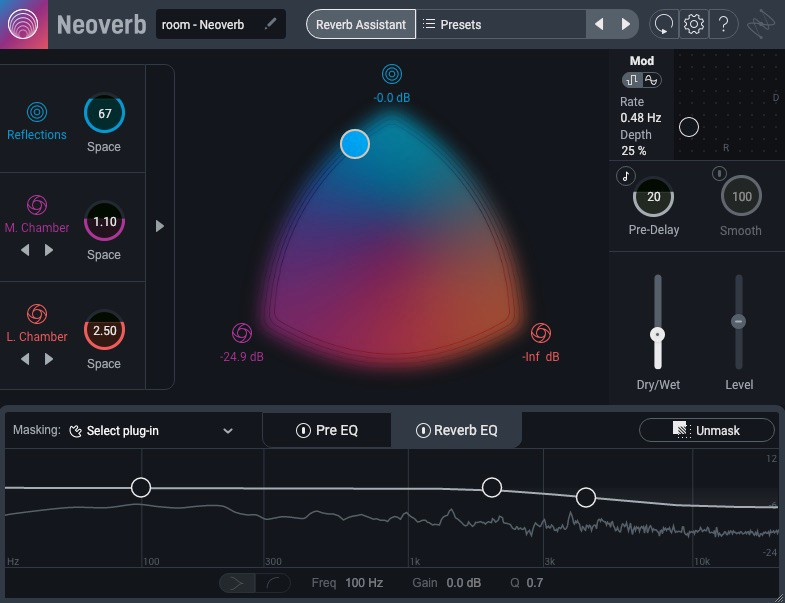 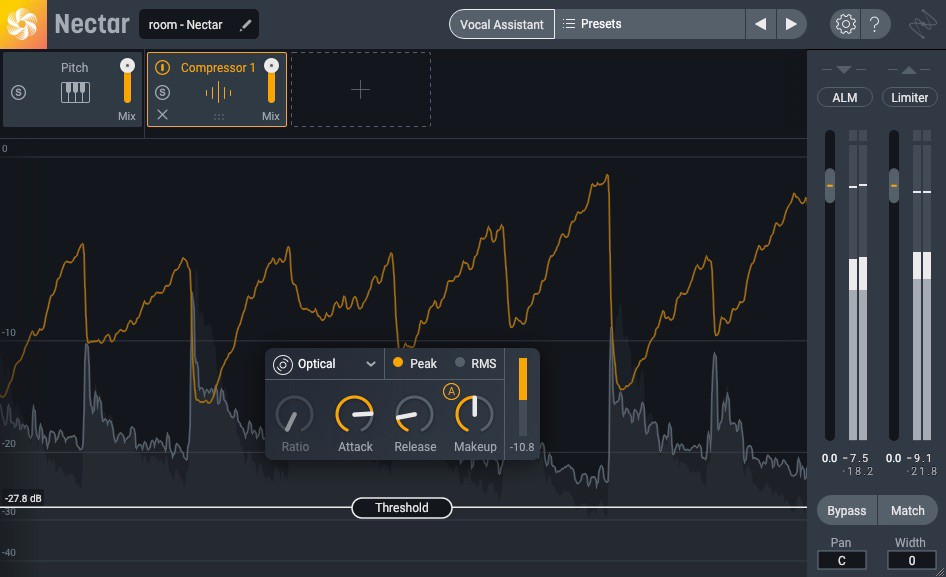 Smashing a bit with some LA2A style compression

Edged back, here’s the sound:

It goes on like this until I have a sound I’m happy with.

Working in this order allows you to capture a naturalistic sound with tons of character, and we all know rock and roll is about character. The sound of emphasized close-mics carries its own character too, but that character doesn’t vary so much: a close-mic’ed tom tends to sound like a tom in your face. Working on the whole kit from the “big picture mics” first gives you the ability to forge a more bespoke sound.

3. Focus on the midrange of your vocals

Clean, crispy vocals are not the stuff of rock music. Heft, meat, and midrange are where the money lies. Therefore, don't be afraid to let other aspects of the arrangement take front and center in the treble range; cymbals can easily occupy the sparklies, while the voice can simmer well below the 10 kHz mark. A possible rock vocal in Nectar

When just starting out in the mixing game, it’s a common pitfall to make every instrument as bright as it can be. Soon, though, we learn how ineffectual and brash that timbre-makeup becomes, and so we begin to pick and choose our trebles.

For R&B, neo-soul, pop, and even jazz, the vocals tend to win the war of the tops. But these are genres that often sound expensive by definition, whereas rock craves grit, grime, and other adjectives connoting distortion.

A distorted top end often sounds terrible—especially on vocals. Distorting the high mids on the other hand can be quite nice.

4. Don’t edit or tune to death

Again, rock is rough around the edges. Croaks of the vocal give it flavor. Timing inconsistencies of the drums lend groove. These imperfections contribute to the credibility of one band’s bona fides over another. It’s why Mumford & Sons are often the butt of jokes, while the Avett Brothers largely escape.

With this in mind, do not edit everything onto the grid. You will kill that very humanity. By all means, edit the obvious telltales of a bad performance—the train-like speeding up of a drummer after a fill; the bass note which comes in too early—but don't do this at the expense of the groove.

You'll know the groove is dead when you stack the tune against a reference of similar tempo/feel; if you tap your feet at the reference, but strain to dance at your mix, you have a problem.

Conversely, sometimes you'll need to edit for groove when it isn't there. This is often best accomplished not by pushing the drums around (unless they truly are off-time), but in moving the bass and guitar slightly behind the beat, or more often, slightly ahead of the beat; this creates a tension that engenders groove.

Usually—but by no means always—you'll want to move these elements earlier (ahead of the beat). This creates a feeling of intensity, rather than a relaxed swing, which is what you'd get by moving these elements later (i.e., behind the beat).

Be careful though: you will not have to do this often, or throughout the whole tune. It's merely another tool at your disposal, and overuse creates more problems than solutions.

Moving on to the vocal: try to tune in a less aggressive manner than you normally would, which means grabbing only the worst offenders and audiosuiting them in tune (in Pro Tools) or enacting the region-specific processing of other DAWs. 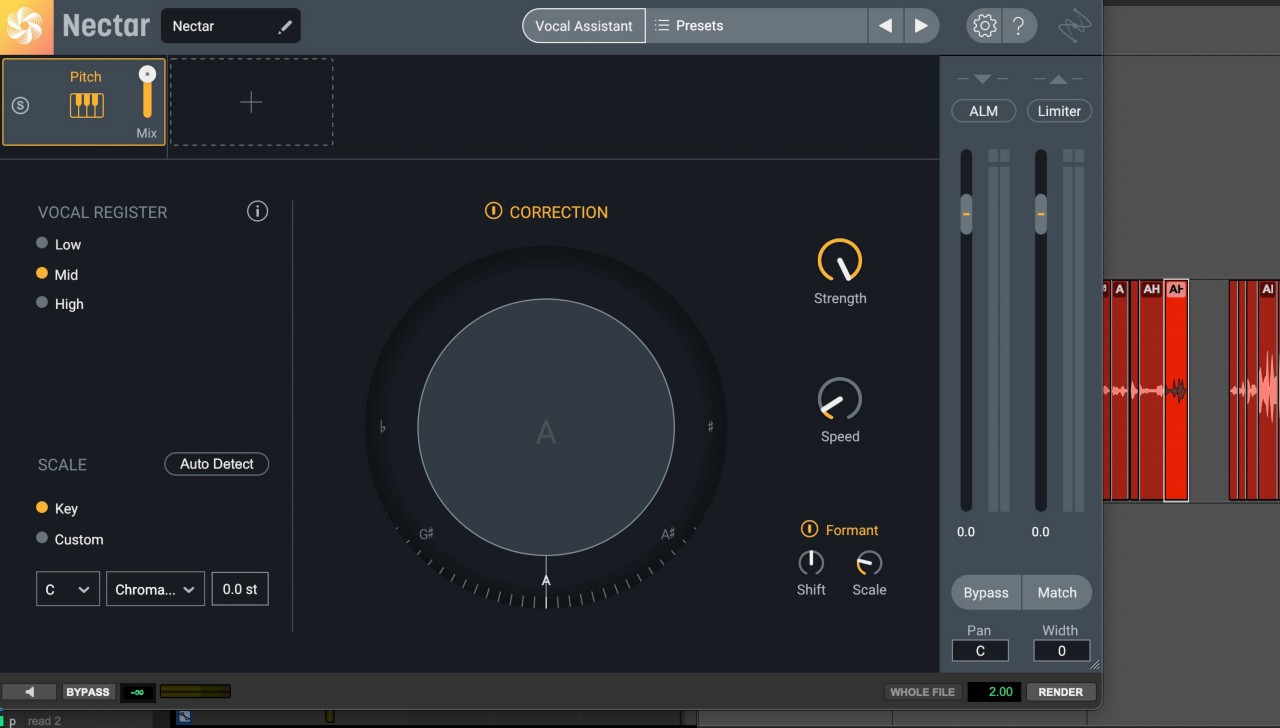 Using Nectar as an Audiosuite in Pro Tools for pitch correction

Don't put every instrument on every grid, and don't tune every note.

5. Find ways to differentiate your first and second verse

In many rock songs, the arrangement of the second verse is a carbon copy of the first. This is especially true in stripped down ensembles like power trios. Therefore, differentiating the second verse from the first in some sonic manner is helpful, or you could run the risk of mixing what sounds like the world's most expensive demo.

If you're working with excellent players who took the whole song live, then this directive might not apply. But these days, the second verse can often feel cut-and-pasted together, and this requires your utmost attention.

Parallel processing can be your friend here: the introduction of a slight fuzziness to the bass on an auxiliary track might be enough differentiation, as might a squashed drum bus edged into the overall drum picture.

Maybe the bass sounds like this on the first verse:

Differences in delay throws can be your friends, as well as subtle modulation to impact the overall width or perception of the second verse.

If you were presented with DI's of the guitar and bass, you can get very creative indeed. You could try "canning" the first half of the verse and opening out to the full heft of the arrangement on the downbeat of the second half.

The options are endless. Here’s the takeaway:

If the band isn't giving you anything emotionally different for the second verse, it's on you to provide it. The band might have problems with overt changes, so don't go bold; keep it subtle.

This article references a previous version of Ozone. Learn about Ozone 10 and its groundbreaking new features including the new AI-powered Master Assistant, adaptive mastering EQ with the Stabilizer module, and more.

6. Use automation between verse and chorus

When mixing rock, try some sort of automation move—be it in frequency, width, volume, or wetness—to deliver the emotional impact of a chorus. If you use submixes for your drum buss, guitars, etc, you can easily perform these automation moves on a global scale.

A classic trick would be to juice the chorus section in level by 0.5–1 dB. Other creative choices abound: Try putting an imager like the one in Ozone on the music bus and widening the guitars ever so slightly for the chorus.

You could also try rounding off the low end on the drum bus around 80 Hz or so in verse two, returning to full, sub-harmonic force for the second chorus.

These sorts of moves create the kind of energy rock music desperately craves.

There are many roads up the mountain of rock, and what I’m providing here are surely broad strokes to cut your path. More granular tips can certainly be related in even more mixing tutorials on iZotope Learn. For now, it is my hope that these tips/procedures will be of use to you on your journey. However you use them, rock on!