Recently, iZotope released a reverb plug-in called Neoverb. To celebrate, we’re offering some tutorials to help you use reverb in a variety of genres. First up is a tough genre to pin down: pop music. Read on for some tips on using reverb in pop music—whatever your particular style.

Pop is an ever-evolving genre. What we consider pop this year might likely sound uncool in five years' time, and be hip again in ten. For example, if I were writing this article in 2013, I’d tell you to employ a bevy of subtler, less-pronounced reverbs to bolster up dimensionality while staying out of the way of the main sounds. If this were late 2018, I’d tell you to be bold, to employ striking, swimming reverb choices.

So what do you do if you want to stay current? Look to the charts and glean some references. Listen to the most obvious, reverberated parts of the tune—most likely the vocals, vocal throws, snares, claps, or sound design elements. Take notes on the spatiality of these reverberated samples and try to recreate them in your mix.

As I write this, “Rockstar” is the number one hit in the country, according to the Billboard Pop 100. Who knows if this will be the case next week? “Savage,” a tune that has wormed its way into more than a few Tik Tok memes, has a more proven track record. This tune has more staying power in the zeitgeist, so perhaps it’s best for this example.

Right off the bat in “Savage,” we can hear a bit of reverb reinforcement on the harmonic elements, as well as some light, out-of-the-way reflections on the main vocal.

In the clip below, I tried to pay homage to the opening chord stabs of “Savage” by creating a similar atmosphere using Neoverb. Neoverb lets you blend three different reverb algorithms—a short room, a medium-sized space (it could be a chamber or a plate), and a larger hall. Though it sports a relatively intuitive interface, the ability to blend among different verb stages gives this plug-in a lot in the way of dimensionality.

I set up a soundalike piece of music like so:

I used various mixing techniques, including stereo width and saturation tricks, to get it here:

But we’re missing the atmosphere. So, I open up Neoverb, which has sliders that blend between different stages, such as Room and Plate. I’ve tweaked Plate a little bit and gotten us to these settings: 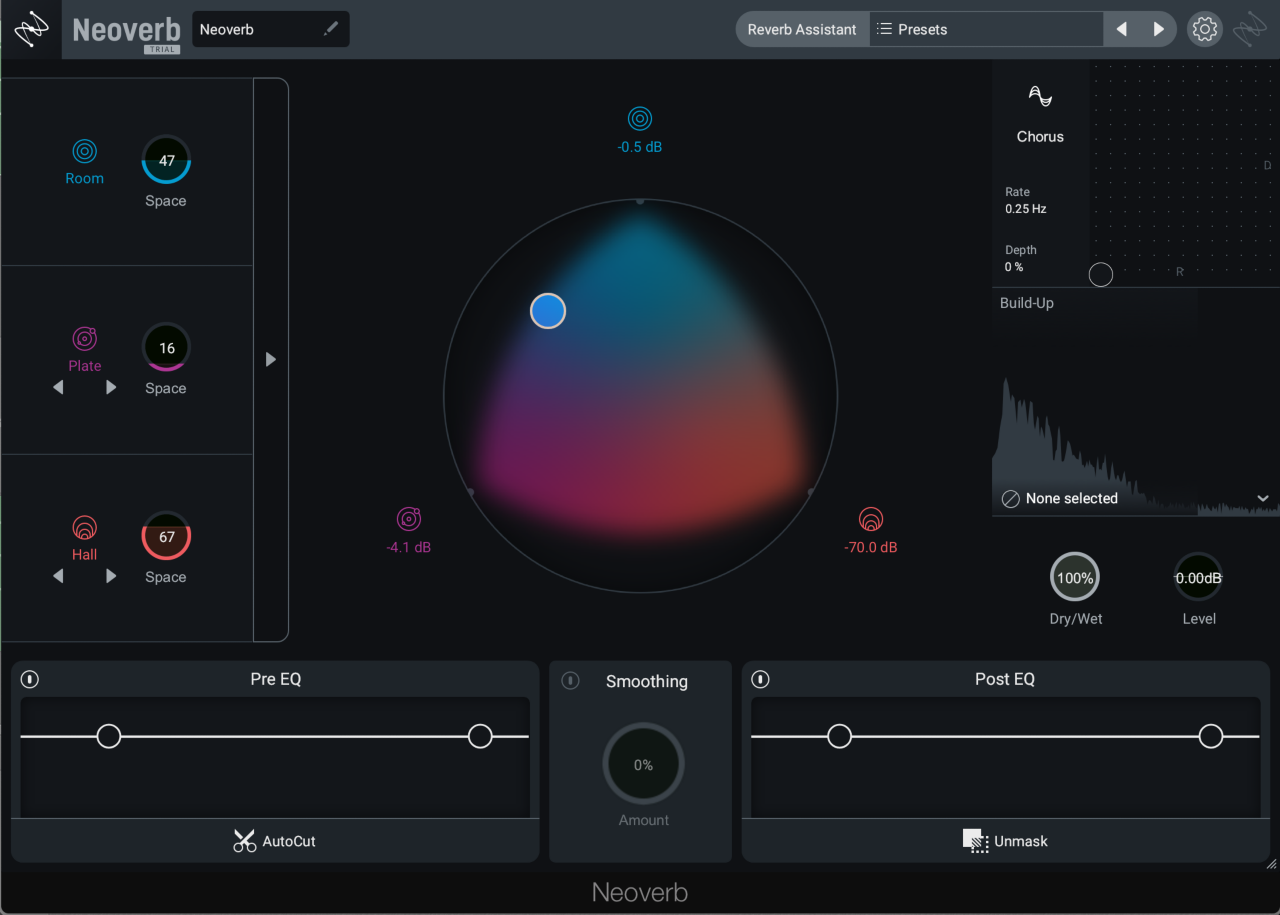 A blend of room and chamber reverb

I’ve raised the verb here a bit higher than I would for a final mix to better highlight it. You’ll note it gets the point across: we’re in the ballpark now as our pop reference. Still, this isn’t enough.

For pop music, demanding the populace’s attention is your goal, so you have to stand out from the crowd. Keep in mind you never want to copy the latest sound verbatim—that wouldn’t be pop in its truest sense. Such copycat moves are better reserved for mixing commercial soundalike tracks, which is an art all its own. Here’s the paradox: you can’t lean too far away from what’s expected; things that are too unfamiliar are no longer poppy, but niche. We want to push the sound ahead by a calculated amount.

So, let’s take our reverberated chords from the previous example and see what happens if we process the reverb further with something idiosyncratic. Stutter Edit 2, for example, allows us to create dynamic, ever-evolving rhythmic and melodic effects from subtle to absolutely insane. Let’s use some subtle processing to push the envelope of our sound just a little bit.

Let’s try bringing in some stutter, and add a tape-stop effect right before the verb: 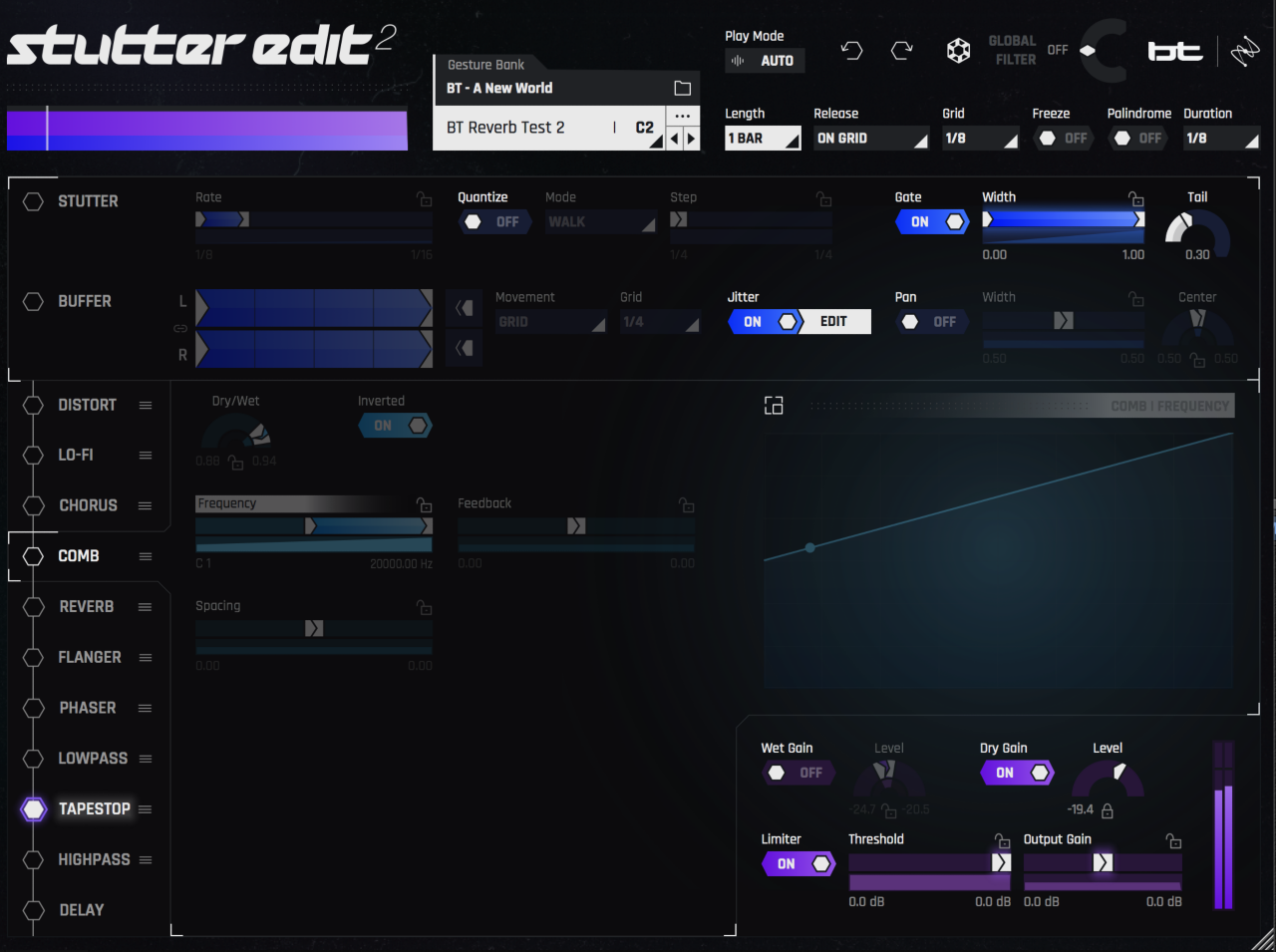 That brings us to this:

That’s already a little different—but what else can we do? Maybe we try a different effect with a second instance of Stutter Edit 2, adjusting the global filter like so: 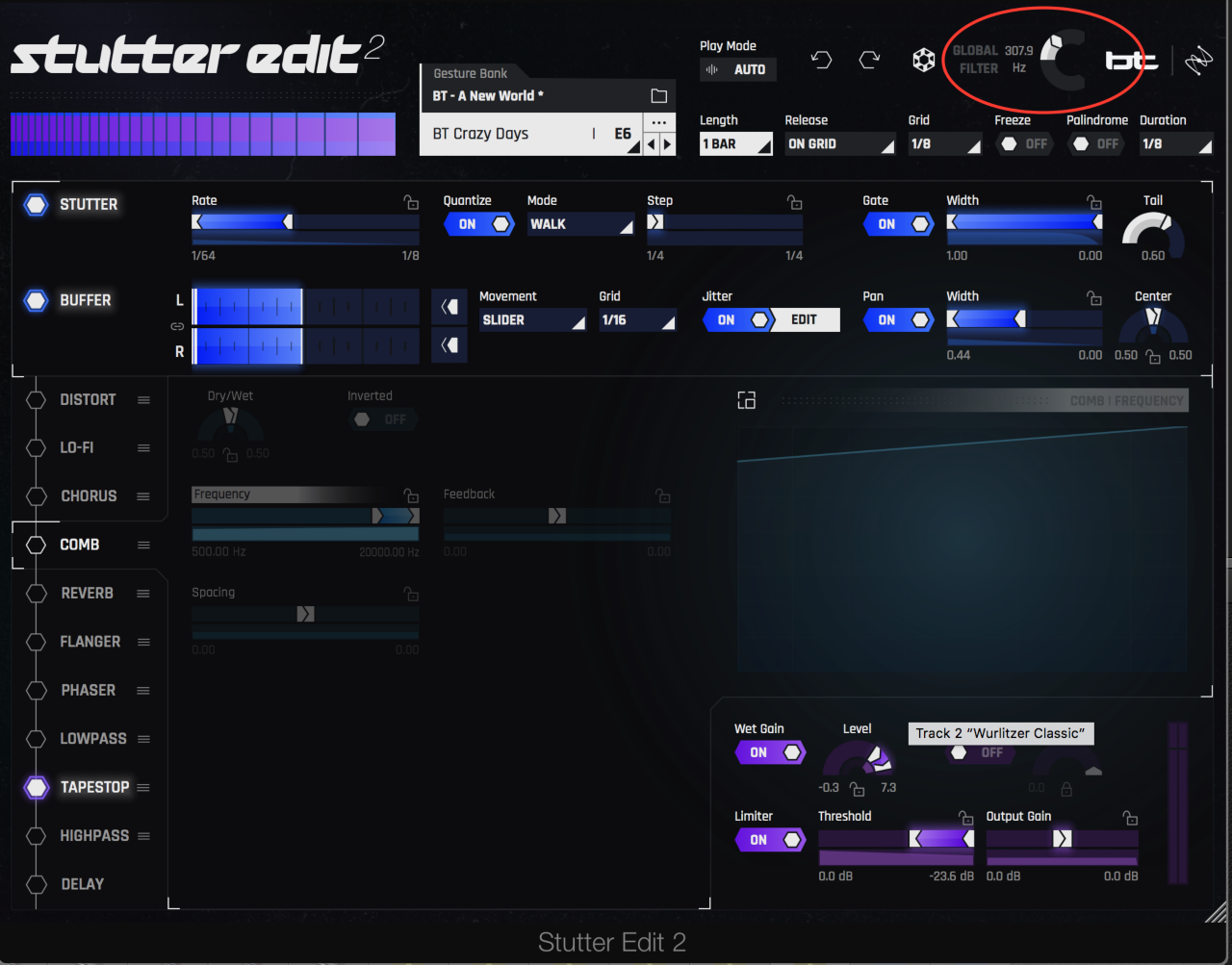 The result of these subtly used effects, fed into the reverb, does take us to a new place:

Now we have something different—something more dynamic. Will it work?

I cannot tell you if this specific reverb choice is enough for this specific mix, because this is an example I made for this article. I can, however, say this: always serve the material. You are not pushing the envelope just to push it, but to make the song the best it can be.

3. Try some unusual processing before your reverb

Now, I know I just advocated for only pushing things forward by degrees, and this tip might fly in the face of previous sentiment. But hear me out.

If the hook is presented in some sort of reverberated element, it may pay to distinguish this element with unsubtle means. Perhaps the input source should be modulated before it hits the verb. One of my particular favorite distinguishing agents, especially useful in vocal throws, is pitch-correcting a source before it hits a reverb.

In this example I’m going to use audio from a tune I recently mixed for the band $100 Girlfriend, who have graciously allowed us to use their song for this article. I want to stress that this is music from a live show they recently did for a social-justice fundraiser, and I’m using this music to show a point. However, I really love this band, and I wish to platform them here. Moreover, the audio works for what I’m about to show you.

Say we have an unaffected vocal phrase with a throw at the end, like this.

We can slap a plate on the throw, and it could sound well enough.

But if we do something bold before the verb—in this case T-Pain style pitch correction (did you know, eons ago in 2011, iZotope released a T-Pain Effect plug-in?), we can create something a little more memorable—something shinier, sleeker, and more unusual.

It doesn’t have to be pitch correction. It could be any process that adds a distinguishing flare—something called a “Sprezzatura”: a distinguishing, clashing element that sets an outfit apart from everyone else’s.

4. Avoid a generic sound by processing the reverb return

In the previous tip, I talked about creating bold reverb sounds by affecting the source before it hits the reverb. Here we’re reversing the order—we’re processing the reverb effect itself—for an entirely different reason.

I’ll never forget the first note I got on the first professional mix I did; the client told me the reverbs sounded cheap. I was baffled. These reverbs were top-notch plug-ins exhibited in all their splendor—what could he mean by “cheap?”

Years later, I have the ability to translate what he meant: the reverbs sounded generic. They recapitulated the sound into a generic wash of ambience; there was no character to them.

Unless pop culture begins to turn to a particularly flat, dimensionless sound, you’re not going to get what you want with a generic-sounding reverb. So, take some time to add a little color. Harmonic exciters and EQ are two tools that can add a lot of creative character to reverbs, and when used correctly, they can help the reverb stand out in the mix.

Observe this vocal with its “generic-sounding” verb:

Let’s see what happens if we cut off the highs and lows of the verb, add some harmonic excitement from Neutron, and a little sparkle from the Sculptor module. Furthermore, let’s bring in the width a little bit, and move the verb to the left a little. 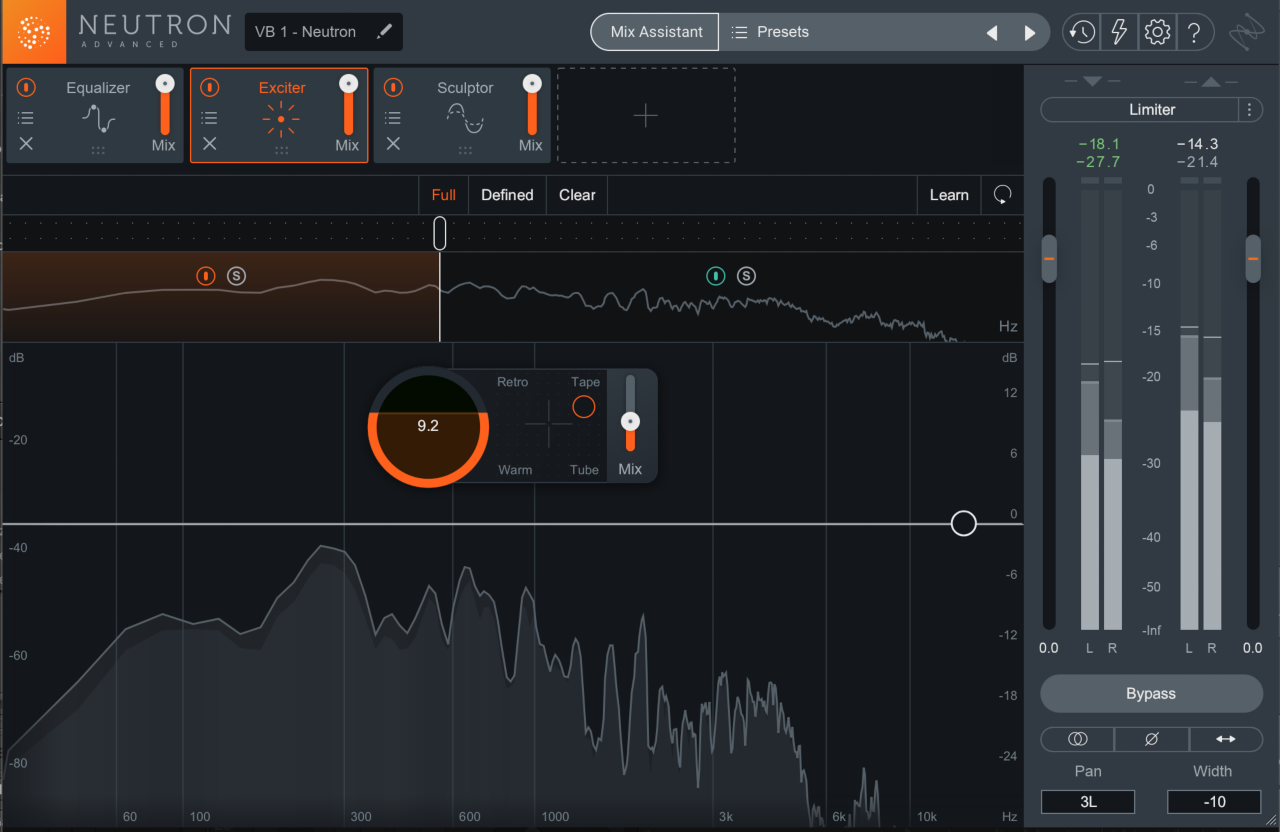 Now we have a reverb with nuance and character!

5. Let reverb bolster the integrity of your vocal

If we can offer one general rule of thumb with pop reverbs, it’s this: always use the reverb to bolster the integrity of the vocal. In pop music throughout the years, the vocals have always reigned supreme. Some instrumental top-ten hits have graced our eardrums, sure. But these are the exceptions that test the rule. In the world of pop songs with lead vocals, the lead vocal is paramount. Your vocal reverbs must serve their integrity.

But what do I mean by “integrity?” Do not confuse integrity with intelligibility. Daft Punk frequently makes the pop charts with vocoded offerings that aren’t, strictly speaking, clear. “The Hills” by The Weeknd offers a hook that is distorted and somewhat unintelligible. For the longest time, a dear friend of mine thought the lyrics were “I only call you when it’s hot outside” rather than “I only call you when it’s half past five.”

Back to integrity: I submit that vocal integrity is synonymous with intent. You must process any vocal reverb to suit the intent of the vocal. That could mean adding EQ, compression, or saturation—whatever helps preserve the integrity of the vocal.

But it doesn’t stop with the vocal. Any other reverberated element must serve the integrity of the vocal as well. That snare verb, which helps the percussive hit pop? It too must serve the vocal. If it clouds the vocal, you must try something else. Perhaps you should add a dynamic EQ to a  snare verb—dynamic EQ which is sidechained to the vocal’s most present ranges. This is easily done with iZotope’s Inter-plugin Communication, as shown here: 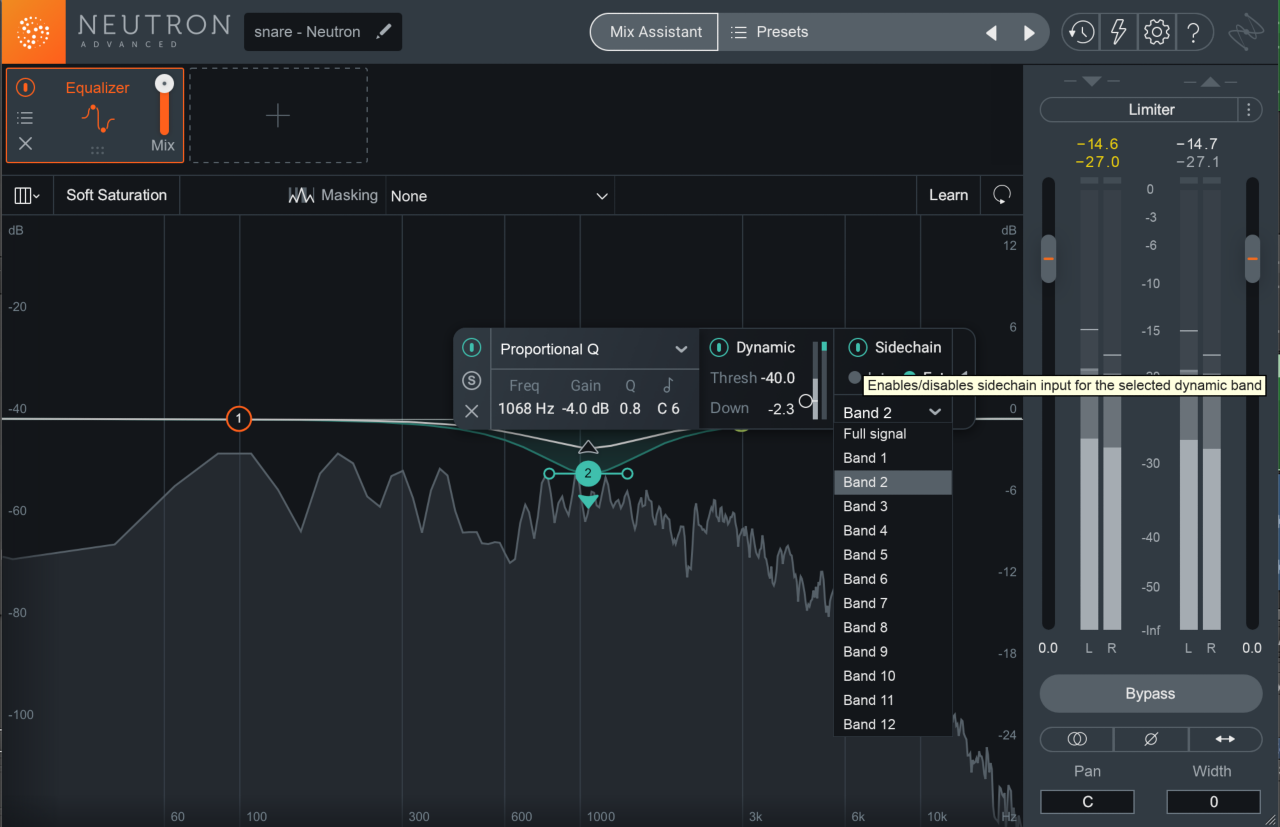 Sidechaining a dynamic EQ in Neutron 3

Honestly, the last tip could serve as our conclusion—it bears repeating, to be sure. You must always serve the integrity of a vocal in pop music, no matter the era, no matter the kind of vocal. Reverb is a powerful tool. It can help you bolster integrity in a variety of ways, some creative, some practical. It can also overwhelm the original sound and destroy the entire mix. Remember the power of reverb—and also, respect its power—as you go forth and mix.

Don’t forget to visit our reverb learning hub for more free resources on reverb in mixing and music production!