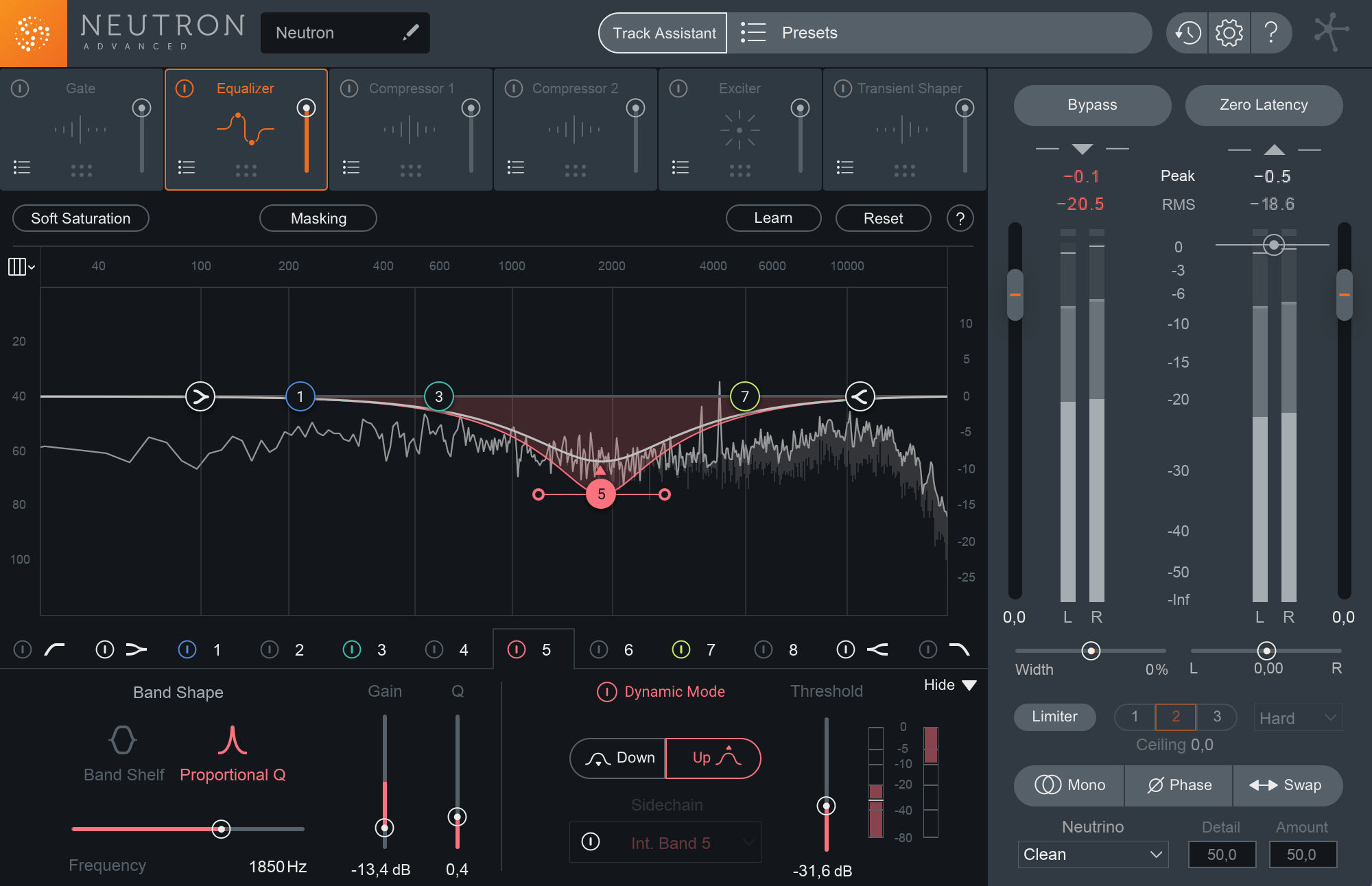 We’ve already covered the basics of dynamic EQ, including how and when to use it in both mixing and mastering contexts. Today we focus on a specific use of dynamic EQ—in combination with a sidechain trigger.

Here’s a common scenario: you’re mixing and every time the kick and bass parts coincide, your monitors get overloaded with low-end content and the kick seems to disappear. These two sounds share similar frequencies, so the bass is masking the crack of the kick and forcing it out of the mix.

To troubleshoot, you turn up the kick for more power, but this doesn’t help, since you have to bring up the bass to compete, only making the problem louder. So you try again with a sidechain compressor that ducks the bass whenever the kick lands, but this reduces the entire bass signal and produces an obvious pumping effect you don’t want.

I think a more transparent solution is to use a dynamic EQ like the one in Neutron. A dynamic EQ allows you to set a curve that reacts only to changes within a specified frequency range. This way, you can still send the kick drum as a sidechain trigger, but have it duck just the masking bass frequencies and nothing else.

Since the kick is such a short sound, this change is imperceptible to listeners, allowing both low-end elements to come through without any compromise and saving you lots of time with trial and error.

In Neutron, you can achieve this by activating Dynamic Mode on a bass EQ node, selecting “Ext. Full” as a sidechain source, then sending the kick to a return track and routing this signal to Neutron. The threshold value on the compressor will tell Neutron how hard to duck frequencies when the kick lands. Alternatively, you can choose a single band of external audio, which selects just those frequency areas as a trigger. 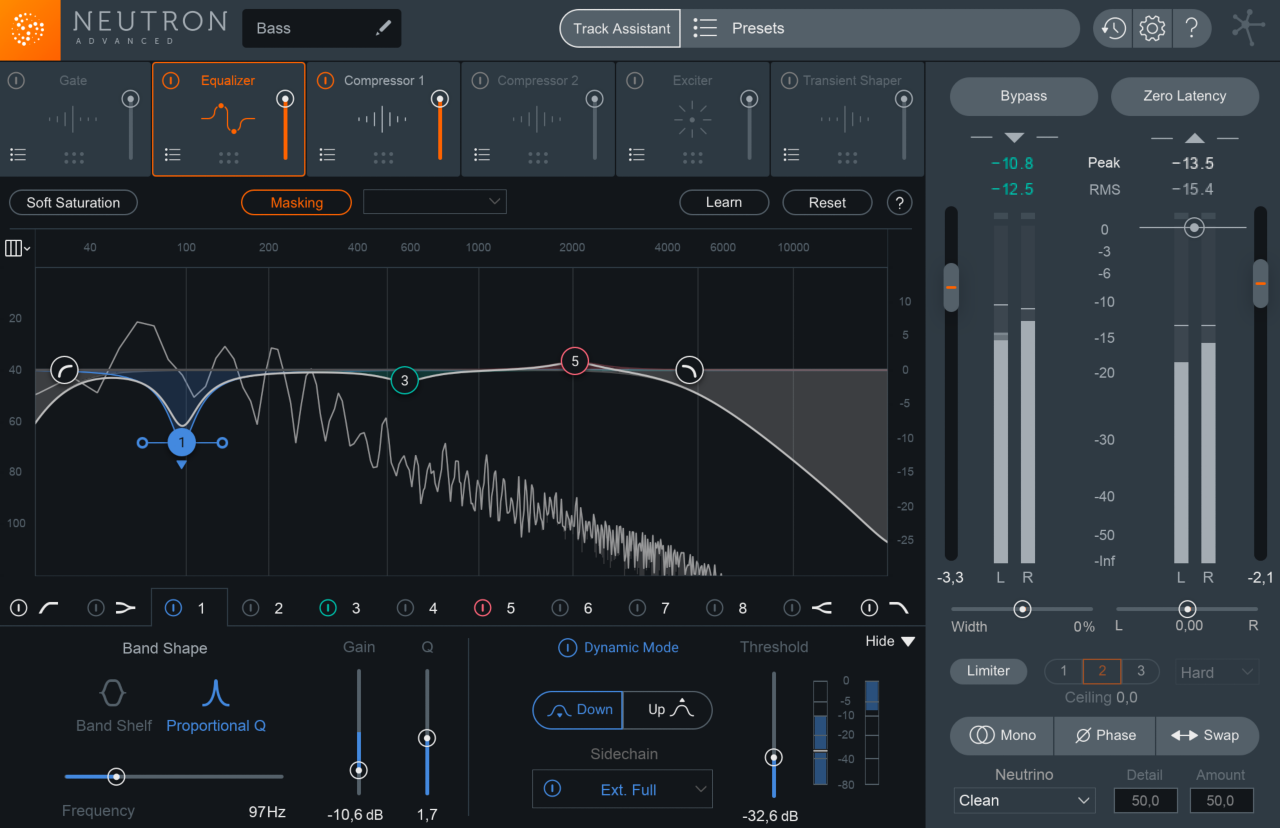 Dynamic EQ on a bass track

2. Mixing a vocal with a stereo track

There are a couple of reasons for needing to mix a vocal to a two-track. Maybe you just found the right vocalist to sing over your song, but you can’t find the original DAW session. Or your client bought an instrumental from a producer online, recorded their own vocals and needs your help to bring it all together.

Not having the option to alter individual tracks in a session presents a major challenge since you can’t edit cluttered sections or filter out frequencies that conflict with the vocal at a surgical level. Additionally, EQ cuts and boost will have a larger impact on the overall sound of a stereo mix than a single instrument. Fear not, however, as a dynamic EQ can solve many of the issues faced in this scenario.

To avoid clashes between the two audio sources, use the vocal as a sidechain trigger to reduce the gain of problematic frequencies in the beat. Start with one or two conservative cuts of 2 dB or so in the upper midrange, and adjust the settings until the vocal is able to have its own space without the beat showing any obvious signs of processing.

Unless there is clashing across the entire instrumental, be sure to either automate the dry/wet of the EQ or separate the unproblematic vocal sections to a different channel without EQ to ensure frequencies aren’t cut needlessly.

3. Balance a signal within itself

We’ve already looked at how an external source can trigger a dynamic EQ, but what about internal triggers within the audio itself? From the Dynamic Mode panel in Neutron, you can set the nodes on a single instrument EQ to react to one another, opening up a range of powerful ways to surgically sculpt audio.

Say a guitar has a pleasant midrange but a high end that is a little too harsh for the mellow acoustic vibe you’re trying to create. A low pass filter or shelf around 6 kHz will reduce the harshness but also give the signal a muted feel that tugs down at the overall energy.

One solution is to place a node around the warm harmonics you like and another at the center of a wide cut where you want to attenuate, then set the former to duck the latter. Now, whenever those nice mid-range frequencies are active, the EQ will reduce the level of the less pleasant ones, especially around the attack portion of each note. As the notes fade out and the harshness isn’t as disruptive, the level will return back to its normal position.

The will simultaneously tame the guitar signal and give it a more dynamic ebb and flow from note to note that is more interesting to the ear. You can apply similar concepts to synths and pianos that have regular tones changes.

Mixing drums is one of the bigger challenges in a song because we expect them to be many things at once: loud, groovy, punchy, cohesive, clear, etc. Compression and transient shaping are a big help here, but dynamic EQ proves useful when carving a unique space for each drum hit. For example:

There’s no end to the kind of sidechain routing you can get done with a dynamic EQ and drum kit, so I encourage you to experiment with what’s possible in your mix, whether for corrective (which I’ve mostly focused on) or creative purposes.

5. Use Neutron’s unmasking feature to save time

If I’m working in a rush and not paying enough attention I might carelessly employ a drastic EQ to solve a masking issue that is only occurring in a small band of frequencies. Most of the time, however, conservative cuts do a better job of separating signals in a transparent way. If the overlap between the kick and bass is happening between 40–80 Hz, there’s no need to set your kick sidechain to squash everything below 100 Hz when it lands.

So, If you’re a new mix engineer, have fatigued ears, or simply want to work faster, use the unmasking feature in Neutron to visually locate clashes between signals and more accurately dial in dynamic EQ curves.

If you already have an instance of Neutron running in your mix, use the masking meter to pull up a separate Neutron EQ from a separate instrument in the same window. Now you’ll be able to see where frequencies overlap and make the necessary adjustments. The white and gray panels indicate where masking is taking place, and the red bars reveal the severity of it. Following these guides, you’ll be surprised at just how well a small cut or boost can improve the balance of two signals. If you aren’t using multiple Neutrons, try our CPU-friendly plug-in Relay instead. Though it won’t allow you to sculpt it’s signals with EQ or set sidechain triggers, you can still see the offending frequencies in Neutron. To remove static issues in a signal, traditional EQs still remain very helpful. But when working with audio sources that change throughout a recording, dynamic EQs paired with a sidechain trigger provide a more natural, musical option to shape them.

The techniques listed here just scratch the surface of what’s possible, but sticking to them alone will greatly improve the quality of your mixes. Learn more about the dynamic EQs in Neutron and Ozone.