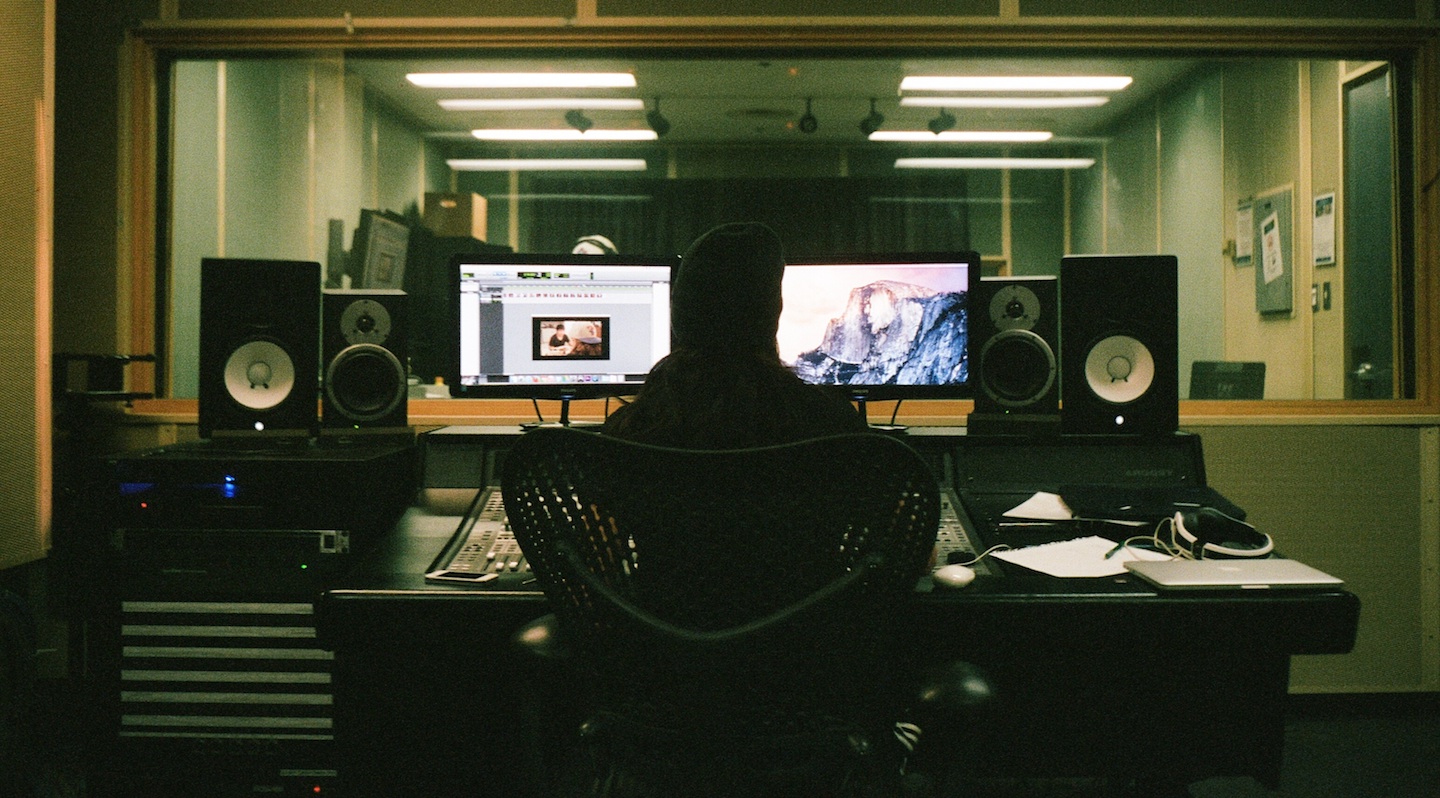 In July 2018 we published a blog entitled “11 Mixing Tips for Panning Music with Intention,” covering techniques like hard panning, the LCR method, and more. Since then, that blog has become one of our most popular mixing guides. Today we present the sequel: five more essential mix tips for panning music with intention. Enjoy!

We’ve covered side to side panning tactics. We’ve talked about front to back movement. However, did you know you can also pan for height? Yes! You can make a mix feel taller or shorter—and you do it with EQ.

We’re working with a psychoacoustic phenomenon here: a sound sporting more low-end content can feel lower to the ground, while a trebly sound can appear to soar, not just in pitch but in height. With intelligent organization, you can use this phenomenon to make your mix sound as though it’s not only wide and deep, but tall.

One way to give your mix the feeling of height is to plot delineated ranges of emphasis—key frequency bands for each of your instruments. Say the fundamental of the bass hits around 50 Hz and the kick at 60 Hz or so. Say we keep thinking of instruments in this manner, stacking up the instruments: snare, guitars, onward and upward, through the vocal, the cymbals, and every other element in the mix. If you conceptualize the elements in this fashion, and with this intention, you can create a mix that feels stacked in height.

Obviously, you don’t go out of your way to make drastic changes to sounds (unless they’re called for). You can’t bandpass a snare to between 100–150 Hz and still expect it to sound vibrant—or remotely snare-like. It’s the clever stacking and focused focal points that give your mix the illusion.

Let us postulate a female lead vocalist singing over a bass, kick drum, and electric piano. You could create a sense of height in this mix by high-passing the vocalist just a touch more than you normally would—not so much that her voice sounds too thin. Instead, just a little bit below that frequency. Duck the conflicting high-mid frequencies out of the electric piano (easy to do with Neutron  or Nectar), and maybe shelve the high-end off the bass around 2 kHz, depending on its tone. Have the kick concentrated just above the bass’s focal point, with a parametric notch to make room for the bass. With instruments stacked from low to high like so, this could feel like a tall mix indeed.

Of course, the best way to create the illusion of height is not in a vacuum, but relationally. Perhaps we want a “low” verse and a “high” chorus. We can do this by emphasizing bassier elements in the verse, followed by a chorus with elements stacked in the manner outlined above.

Yes, you can use level automation to create a sense of height panning: in the chorus, raise the level of the high-frequency instruments, and that chorus will feel taller.

We can achieve an upward lift over time by automating the EQ of an instrument, notably by using a subtle, wide parametric boost up the frequency spectrum. Move this parametric boost very slowly as the passage progresses, and you may notice a sense of rising. I’ve used this to make vocals rise from the pits of despair to the heights of happiness, to make tom drums descend as though tumbling down the stairs, and even in post-production to make certain characters appear taller than others (works great in podcasting and radio).

Don’t sleep on the Haas effect—it’s a very powerful (and also very abusable) method for panning. Basically, if you put a stereo delay on a mono signal, and manipulate one side by a small number of milliseconds, it won’t come across as two discrete sounds; instead, it’ll feel as though the sound is leaning to the opposite side.

This is commonly thought of as a widening technique, but it can also be used to pan a signal to various degrees of the stereo field without ever touching a pan pot, if used with really, really small values (we’re talking samples, fractional values of milliseconds, and milliseconds in the single digits).

But why would we go for this option over conventional panning? If we wanted to create an apparent “hole” in the signal, one that could wrap around another element, that could be a reason. Here’s an example:

Imagine a mono guitar and a lead vocal. Say we wanted to do some panning that felt a little more “complete” than two instruments would ever feel. We could pan the guitar slightly off-center and keep the vocal down the middle, but this might sound anemic. Alternatively, we could add a stereo delay to guitar and delay the right side by 0.5 milliseconds. The guitar would still sound slightly off-center, but the mix could very well feel more full.

At least, in stereo; the caveat here is that mono playback might be a disaster. One must be extremely careful in introducing Haas-effect delays, as they can mess up a mono fold-down. The delay I talked about above? It would sound weird in mono—maybe not bad, but definitely different from stereo.

3. Use stereo trickery to emphasize a mono element

With snares, basses, kicks, and vocals usually occupying the middle of the stereo spread, how can we differentiate within this thin slice of the mix? How can we pan within an un-panned plane? Level relations are one easy way to do this, frequency carving is another.

But a third involves—believe it or not—stereo trickery! The Haas effect comes to the rescue again, this time deployed in a very specific manner. Bus one element of this hodgepodge, say the vocal, to a stereo aux track. Add a room or chamber reverb, and minimize all late reflections, so all you hear are the early ones. Now, place a stereo delay on this reverb and shift one side of the stereo spread somewhere between 7–14 ms. Edge it into the mix, and you may notice that the element now feels heftier than the rest of them, more emphasized—dare we say, more mono!

You can pan with more than your pan pot, and one way to do so is with using a stereo EQ on a mono source. Many DAWs let you instantly convert mono to stereo, and when you do so, you can come up with creative panning techniques for placing specific chunks of the frequency on either the left or right side.

A classic example would involve electric guitar. You don’t want to double it, but you want to give it the old stereo treatment. So, with an EQ, you pan the low frequencies to the left, and the higher frequencies to the right. You can easily achieve this effect with an EQ such as the one in Ozone 8. Flip the stereo EQ into independent Left and Right modes, place a broad low-pass filter on the left side and a corresponding high-pass filter on the right. It doesn’t have to be pass filters: you could use parametric boosts and cuts to achieve this wrap=around effect, with a low midrange boost in the left and a high-mid boost in the right. Study the relationships between stereo equalization and directionality and you’ll be surprised what you get: you can go far behind the mere widening aspect of extreme left and extreme right; you can achieve a subtle leaning in one direction or the other, in a way that creates a hole for the vocal much like the Haas-effect technique, but without causing issues in mono.

You can also create movement within a given track using EQ automation. You could, for instance, notch some bands in the left channel and boost some in right, automating their relative levels over a phrase. Do this over the course of a bridge, and then clap everything back to unity gain on the right, appropriate word. That’s an intentional panning move.

5. Play Instruments against the width of the drums

Here’s something that took me a while to understand: the width of your drums, in many cases, dictates the width of the mix overall.

For instance, it’s tempting to push the overheads left and right, put the snare up the middle, and have the toms and hi-hat follow the natural spread. But if you do this, you may be limiting the rest of the mix, essentially creating “pockets” to fill here and there in the stereo field. Go the other route—narrower drums—and you have more room on the sides for various other elements. Suddenly you feel the width of double-tracked, hard-panned guitars more acutely, or you feel embraced by the vocals.

If you build your mix from the drums up, it can be easy to follow the former approach every time, and thus, fall into a trap. The resulting mix might suffer from a uniformity that may reveal itself over the course of an album. So I invite you to think of your drums not only as a critical rhythmic undercurrent, but one that dictates the panning of your mix.

Certainly many rock mixes, with double-tracked guitars panned left and right, benefit from narrower drums—you’d be surprised how many tracks songs like they have big, open drums in your memory, but are actually quite narrow upon close listen, and all to make room for the guitars on the sides.

In the previous article’s conclusion, I wrote: “doubtlessly we can find more panning scenarios and more possible solutions to all your panning woes.” I think it’s fair to say we’ve done that—five times over! But there’s a reason I didn’t introduce many of these techniques the first time around: they can wreak havoc on your mix, especially during a mono playback, which is still important these days.

This is why we must always circle back to intent: Is the reason for our decision worth the possible trade-off? We must always consider this question. It’s a catchphrase of professional magicians that every miracle has its price. When it comes to the panning moves outlined above, we must also remember that they too come with trade-offs: panning for height might not do well for playback devices with narrow frequency ranges. Panning with delays could cause mono problems.

Still, we don’t call miracles “miracles” for nothing. Experiment. Pan for your panning prospects as the prospectors of yore panned for gold!