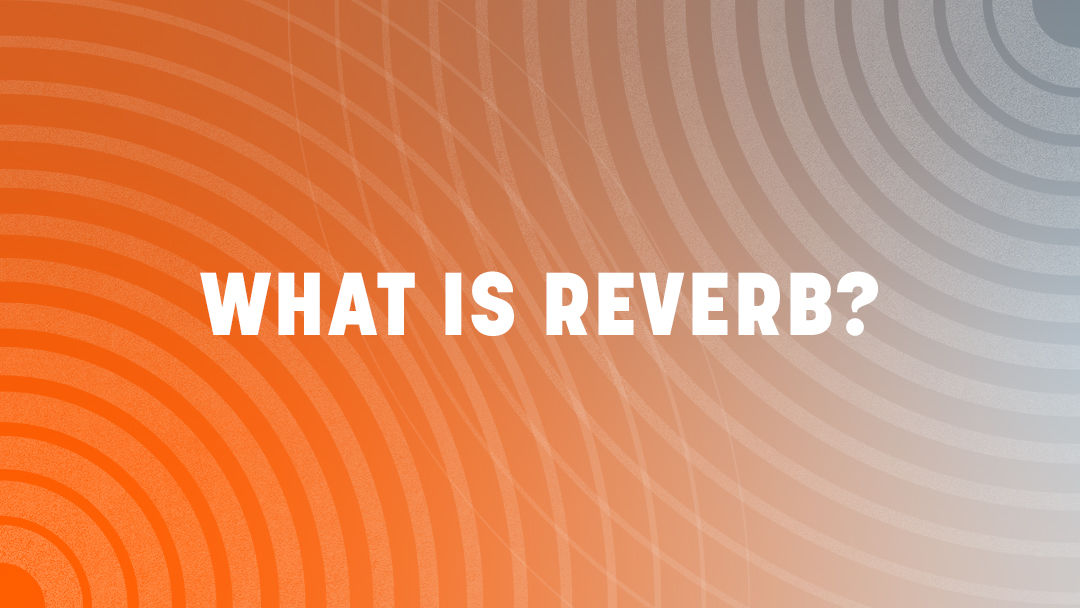 Reverb is a series of many closely-spaced sound reflections—a ton of them—that we hear as a continuous sound. If you were to hear a room’s reverb slowed down by an extreme degree, you would hear the reflections as distinct repetitions of the original sound.

Those repeats would have variations in amplitude, frequency content, and envelope, caused by the physical properties of the room such as the dimensions of the space and what material it’s made from.

What does reverb do?

Reverb has many applications both in music and post-production. It can be added to individual mix elements in a song to create a sense of depth and space, or to connect instruments that were recorded in separate spaces by giving them shared acoustic properties. In the film and television industry, it is often used to ‘blend-in’ re-recorded dialogue by an actor after the filming process, through a workflow known as ADR mixing (Automated Dialogue Replacement) mixing.

Whatever the use case, reverb takes a dry audio signal and adds an acoustic environment to it that fools you into believing that it may have been recorded in a concert hall, stairwell or a space completely untethered to reality!

Below is a dry signal, a snare hit, and the same signal once it's been affected with reverb.

In the audio clip below, the first snare hit is dry, but the second one includes early reflections from a hall reverb. Notice that they create an identifiable room sound even though there is no reverb, or late reflections.

Pre-delay is the amount of time between the direct sound and the start of the early reflections. Larger rooms naturally exhibit longer pre-delay because it takes longer for the direct sound to reach a surface and reflect off of it.

Listen to the following audio clip to hear a dry snare followed by its repeated ‘echo’ if you will. If you increase the pre-delay time, you hear a more pronounced gap between the dry audio and the start of the repeated sound. This can be used as a great creative reverb effect.

Decay time is the duration of time it takes for the sound pressure level in a room to fall by 60 dB. It might be helpful to think of this as a ‘reflectivity’ control. So if large and small rooms are constructed with the same materials, the large room will have a longer decay time. Although somewhat dependant on frequency, rooms with highly reflective surfaces such as concrete or hardwood will give longer decay times than rooms with absorptive surfaces such as carpet and fabric. The audio clip below contains a dry snare, then the snare with a room reverb set to around a 400 millisecond decay time, then the same reverb with around a 2 second decay time and a 4 second decay time.

Listen to the following audio to hear a reverb with low damping followed by the same reverb with high damping. Notice the difference in the high frequency content.

Finally there are many reverb types like Plate, Chamber, Hall, all of which are included in Exponential Audio’s reverb plug-ins

This is reverb resulting from the unique physical characteristics of concert halls, which are typically large spaces acoustically designed for a long, smooth decay. Acoustically, this means fairly long propagation times and slow reverb buildup. It also allows reverberation of long wavelengths, with a typically robust low frequency component.

Pro Tip: Because of its long propagation time, a hall is seldom used on percussion instruments. The first 'bounces' of a strong transient are quite audible and are usually very distracting.  A plate or chamber reverb is more suited for percussion sound sources.

Chamber reverb is reverb resulting from the unique physical characteristics of reverb chambers, which are reflective spaces such as a corridor or stairwell designed to house a speaker and microphone configuration for triggering and recording the reverb.

Plate reverb is reverb resulting from a vibrating metal plate. In a real plate reverb, a large sheet of metal is suspended in an enclosure. Multiple transducers—a small driver and at least one small contact microphone or pickup—are attached to the plate. Dry signal is sent from a console or audio interface to the driver, which causes the plate to vibrate. The contact microphone picks up these vibrations and outputs them for use in the mixing system. The larger the plate and the further apart the transducers, the longer the reverb time.

In conclusion, take some time to dive into tweaking your reverbs. Experiment with pre-delay and try printing reverb in reverse, or combine multiple reverb types. Chances are you'll probably unlock some extra sonic goodness. Try reverb in mono, stereo, even surround since Exponential Audio’s reverb plug-ins go from 5.1 to a whopping 22.2 channels!

Hopefully you’re now a little more familiar with what reverb is and how to best manipulate it to suit your post or music production needs. But if you want to dive deeper into the world of reverb, check out our tutorials and resource page on getting started with Exponential Audio. Take care!