Mid/side processing is an undeniably powerful technique, and one which gives the mastering engineer a wide range of sonic sculpting tools not available with traditional stereo processing. However, as we all learned from Spiderman’s Uncle Ben, “with great power comes great responsibility.”

We’ve talked about mid/side before, and if you’re new to the subject, I strongly recommend you first check out these three articles. In this piece we’re going to take a deep dive into how exactly the left/right-to-mid/side transform works, how the phase relationship between mid and side effects stereo placement, and some techniques to effectively employ mid/side equalization (with accompanying audio examples), so put on your scuba gear and let’s go!

Transforming a track from a conventional left/right stereo signal to its mid/side counterpart is actually a surprisingly simple process. To derive the “mid” signal the left and right channels are summed (i.e. added, or mixed) together, while to derive the “side” signal, the polarity of the right channel is inverted and then summed with the left channel. Other ways to think of the “side” derivation would be subtracting right from left, or the difference between left and right.

Let’s quickly take a look at how left, center, right, and anti-phase stereo signals appear when converted to mid/side. Try to imagine the summing operations described above while looking at these images. Here we can see that a signal, which starts only in the left channel, ends up in both mid and side channels with equal proportion and equal polarity. 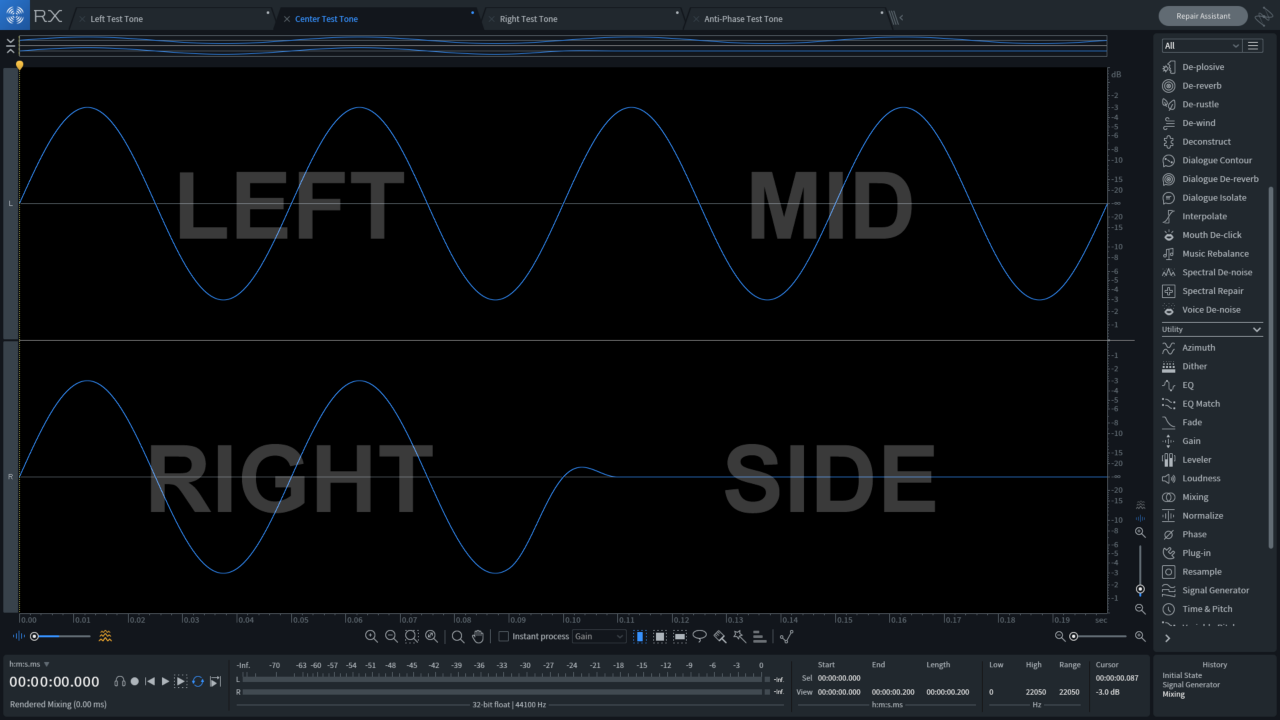 However, a signal that starts panned to the center (i.e. equal in the left and right channels) ends up exclusively in the mid channel. 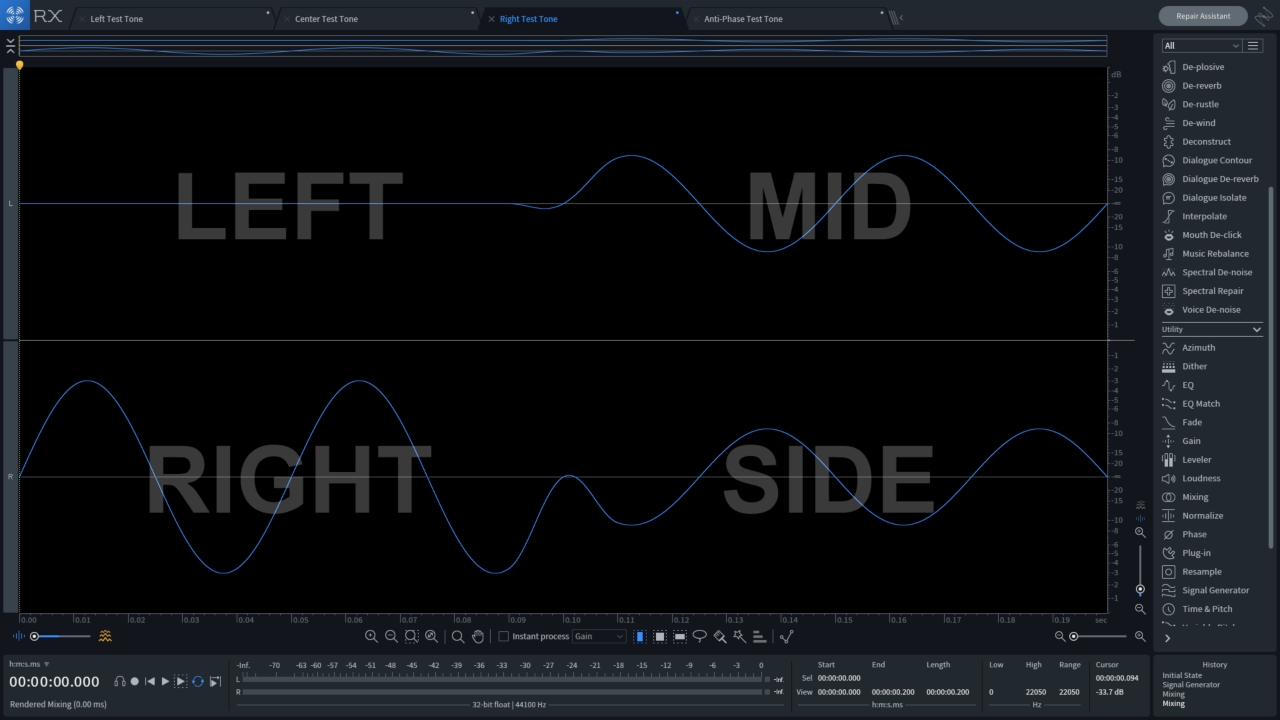 Similarly to the first example, a signal which starts only in the right channel ends up in both mid and side channels with equal proportion. However, the polarity of the side channel is reversed with respect to the mid channel. 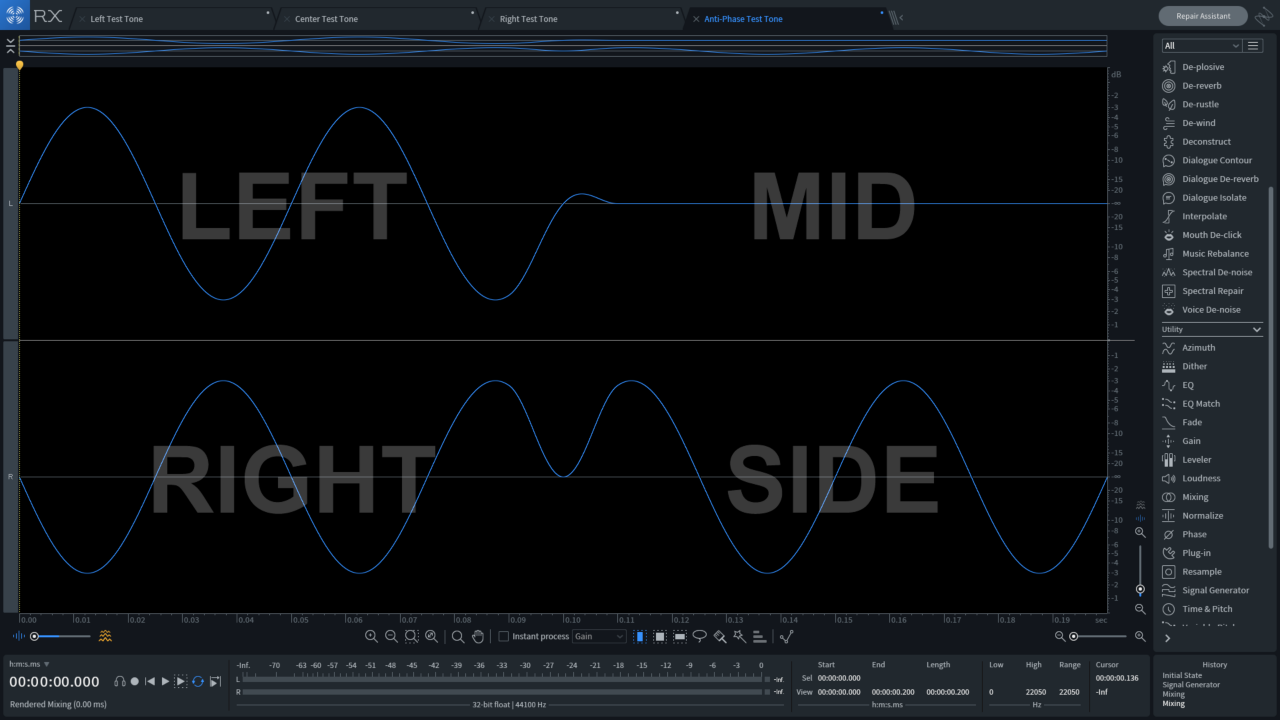 Finally, an anti-phase stereo signal (i.e. one in which left and right have opposite polarity), ends up exclusively in the side channel.

To get back to left/right from mid/side is equally trivial: mid plus side gives us left, while mid minus side gives us right. Referencing the images above again, try envisioning these reversed summing operations as well.

The importance of phase in mid/side

If nothing else, what I’d like you to take away from the above examples is that from a mid/side perspective the difference between hard-panned left and hard-panned right signals is simply a polarity flip in the side channel. Of course, another way to think of polarity reversal is as a 180° phase shift.

Therefore, maintaining the phase relationship between mid and side is absolutely crucial if you hope to get the same stereo placement back after carrying out mid/side processing. For dynamics processing, this is not usually a problem, at least from a phase perspective (although the dynamic level shifts between mid and side can destabilize the image if you’re not very careful!). However, all analog-style EQ incurs various degrees of phase-shift. With some filter types the shift is fairly subtle, but as filter slope increases so does phase shift, with high-pass and low-pass filters being the worst offenders.

Now, let’s get into the good stuff! I’ve prepared some examples to demonstrate how mid/side EQ can have unintended consequences and to show some viable solutions. I do want to point out upfront, though, that in an effort to make these as plainly audible to as many people as possible,  these are simplified examples with exaggerated settings. I’ll also urge you to download the .WAV source files and listen in your studio, as the SoundCloud codec can be particularly unkind to stereo imaging.

First, let’s listen to how an EQ move on the mid-channel can impact hard-panned elements, as well as those in the phantom center. Here, we’re looking to clean up a little vocal boominess at 470 Hz by pulling out 4 dB, but listen to what it does to just the hard-panned guitars, first flat and then EQed.

Did you notice how in the EQd version the guitars lost some of their low-mid girth and warmth? The more observant among you may have noticed that during the mid/side transform there was a level drop when converting a hard left or hard right signal to mid/side, whereas a centered signal maintained its level in exclusively the mid channel.

Essentially this means that adjustments to the mid channel only affect the side channel at half-strength. We can take advantage of this and add a slight boost back in the side channel. Here we’ll use +2 dB at the same 470 Hz. Listen now with the vocal in, first dry and then EQd, and notice how we’re able to clean up the vocal boominess while retaining most of the guitars’ warmth.

If you felt like something still sounded different about the guitars between those two, you’re not imagining things. This is because we’re using an analog-style minimum phase EQ which incurs phase shift. Even though this is subtle with a bell filter, the mid cut combined with the side boost means the phase shifts are in opposite directions, and give a combined shift of nearly 20° both above and below the center frequency.

This, and because humans are extremely sensitive to timing information, means the image gets smeared somewhat. Again though, there is a solution. By using a digital, linear phase EQ we can preserve the phase relationship between the mid and side signals and avoid any smearing or image shift. Listen to the guitars and vocals again, first with a minimum phase EQ and then with the same settings duplicated in linear phase. Though I have a confession, I exaggerated the EQ moves by a further 50% to help accentuate the difference.

In mastering, everything is a compromise. Often it’s possible to employ techniques for which the benefits outweigh the drawbacks. Sometimes though, confirmation bias can sneak in, and if you’re expecting to hear one benefit but don’t know of the associated drawback, you may miss it altogether.

Hopefully this deep dive has helped illuminate some of the pitfalls associated with mid/side processing and given you some creative ways to think about navigating around them. Mid/side offers us powerful techniques which can absolutely help bring a master to life, but they must be used judiciously.

So bust out your copy of Ozone and begin experimenting with both analog and digital modes, listening carefully for unintended consequences. And, of course, always remember the words of Hippocrates and G.I. Joe: “First, do no harm,” and “Knowing is half the battle."