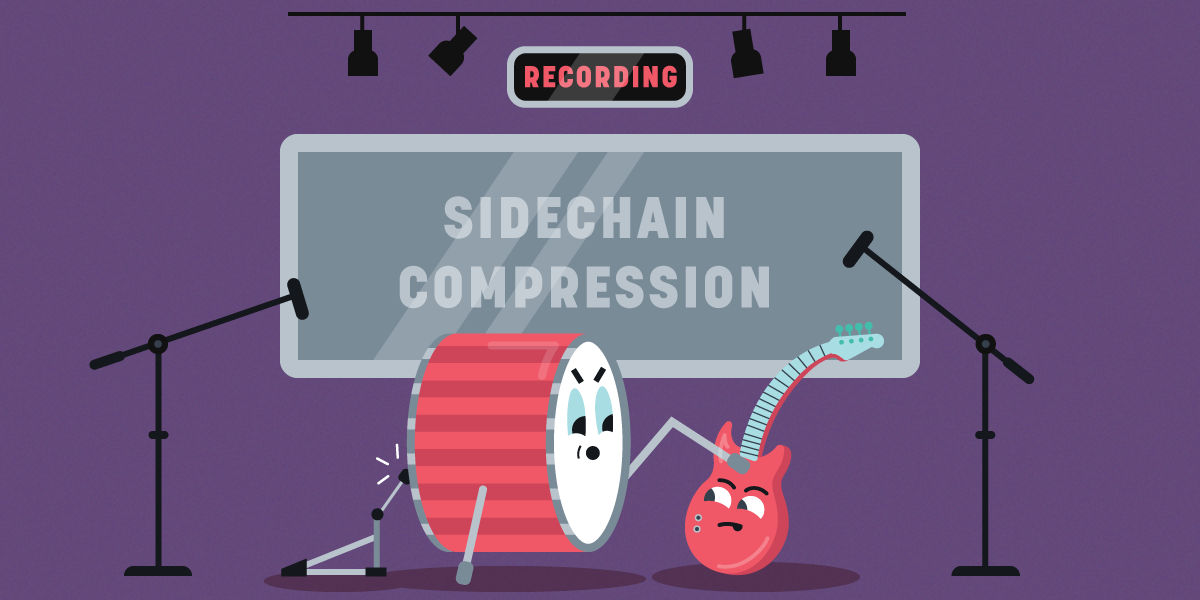 Over the last handful of years, I’ve noticed the term “sidechaining” being used like it’s the password to get by that big bouncer at the city’s hottest club. Even people who admit to not knowing what sidechaining is keep saying it. “I think I’ll have to sidechain the kick. It just needs it, you know? Then, maybe I’ll sidechain the bass because I can’t have it flatlining.” Meanwhile, I’m furrowing my brow and being slightly too judgy.

Sidechaining can be a great solution for some routine mixing problems, or it can shake the foundation of an otherwise solid sound. If you’d prefer to be in control of your sidechain activities and avoid self-sabotage, do read on.

Learn how to use sidechain compression in your mixes with the new oscilloscope view in Neutron.

The core idea behind sidechaining is to use one signal to trigger a processor on a different signal. It’s as if one signal is the key to unlock and activate an effect on another. As a result, some devices (software and hardware) use the term “key input” while others prefer the label “sidechain input.” Understand that a device’s key input (sidechain) is not mixed with its processed audio output. Some processors have a cool “key listen” mode, which allows you to monitor the sidechain signal, but once you turn off that mode, the sidechain will no longer be audible.

How would some fancy sidechaining change the typical bass compression scenario? Let’s see! If a kick drum is used as the sidechain/key source for the bass compressor plug-in, then every time the kick hits, the plug-in will compress the bass.

Wacky as that may seem, it can be quite useful when trying to get the kick and bass to cooperate. If the fundamental concept of sidechaining makes sense, the next step is to make sure you can make it happen.

Follow along and set up your sidechain in your DAW with Neutron, included in a free trial of a Music Production Suite membership.

Let’s use a kick drum and snare drum scenario and break down an average sidechain setup into bite-size morsels. The following steps don’t necessarily need to be done in the order given, but they are in a nice, logical layout. Open a session and follow along!

1.  Insert a compressor plug-in that has sidechain functionality on the drum bus. iZotope Neutron has a compressor with an all-new oscilloscope view to dial in a perfect sidechain.

Neutron's compressor on the drum bus

2.  As we play the track before applying compression, you’ll see oscilloscope in action, displaying the waveform of the material.

See the waveform of the material with Neutron's oscilloscope view

3.  Dial in a decent starting point for your compression parameters—ratio, attack, release, and threshold; those are up to you. By bringing the threshold down, you can see how the accentuated attack is being represented by a sharp spike at the beginning of the waveform. We can now see a visual representation of the attack in the oscilloscope view as well as hear it.

If you alter the release, a shorter setting will make the tail of the waveform appear larger, as the compressor is leaving it unaffected, whilst a longer setting will also compress the tail, and it will appear smaller.

When the sidechain is in use, you will see a purple display on oscilloscope, so you know straight away you’re side-chain mode. Neutron will also give you some default settings when you engage the side chain to get you to the right sound even quicker.

On the regular display, you’ll still see the amount of compression being applied on the orange trace, but you’ll now also see the sidechain input coming into the plug-in in purple.

5. Play the track and begin to play with the parameters. As you would expect, altering the parameters of the compressor will change the waveform in oscilloscope, ensuring you can see exactly how the compression is affecting your sound.

Once you’ve got the routing and standard configuration taken care of, you can delve into some routine uses for this nifty process.

Typically, sidechains will only be found on dynamics processors such as compressors, gates, and dynamic EQs (though you may find exceptions). So, focus on threshold-based audio effects. To get started, here are some frequently-encountered situations that can benefit from sidechain processing.

As long as you have sidechain-capable processors and an unfaltering faith in the power of signal well-sent, the fruits of the sidechain tree are yours for the taking. Pull up some tracks and enjoy! You can also use sidechaining for some pretty creative mix effects.

Try out sidechaining in your mixes with Neutron, included in a free trial of iZotope's Music Production Suite Pro membership.