RX is here, and with it of course come several new modules. Spectral Recovery, Guitar De-noise, and Wow & Flutter are all new tools. In this article, we’re going to show you how to use them effectively.

We live in the age of VoIP—Voice Over Internet Protocol—which means much of the audio we send and receive for remote meetings and video calls is garbled by compression during the streaming process. With that in mind, the team behind iZotope RX have unleashed Spectral Recovery: a tool that can look at bandlimited audio—such as a phone or laptop recording—and make an educated estimation of what frequencies are missing from the audio, then generate and replace them.

Let me just show you.

It can take this:

And turn it into something more usable:

Notice that there’s more air around the sound, especially the sibilants. The resulting recording isn’t perfect by any means, but it has a little more bandwidth to deal with, and won’t stick out so much in a production.

In practice, I found this module most useful when paired with other RX tools. Take this recording, captured by an actress with a less-than-optimal USB microphone. At present, there is a horrid, “fizzy” quality to the high frequencies.

It doesn’t sound great—we’re getting a high frequency buzz that is, quite frankly, driving me nuts. We can see the issues hovering around the 7–20 kHz range: Fizzy frequencies in an actress’ recording

Watch what happens when I cut these frequencies entirely. 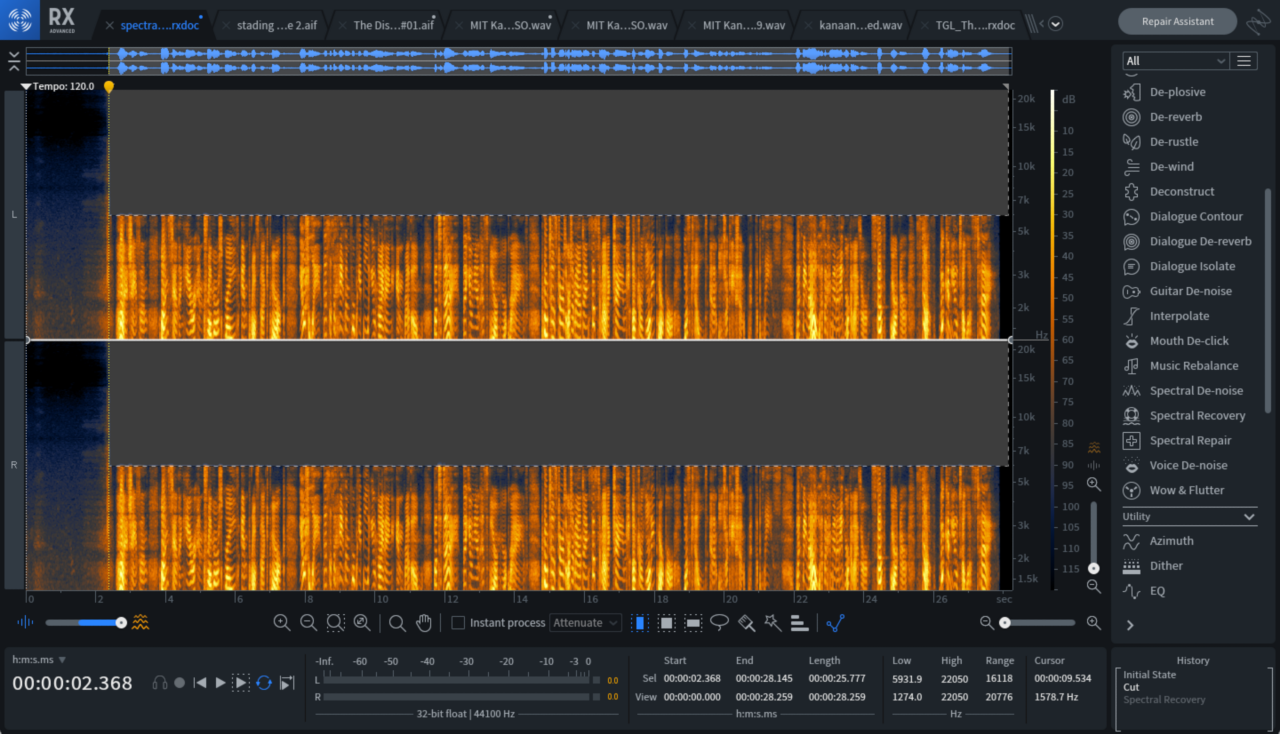 Cutting harsh frequencies in the recording

Now they sound more like what you’d get from a phone call:

Now, let’s use Spectral Recovery to reconstitute what I’ve cut. 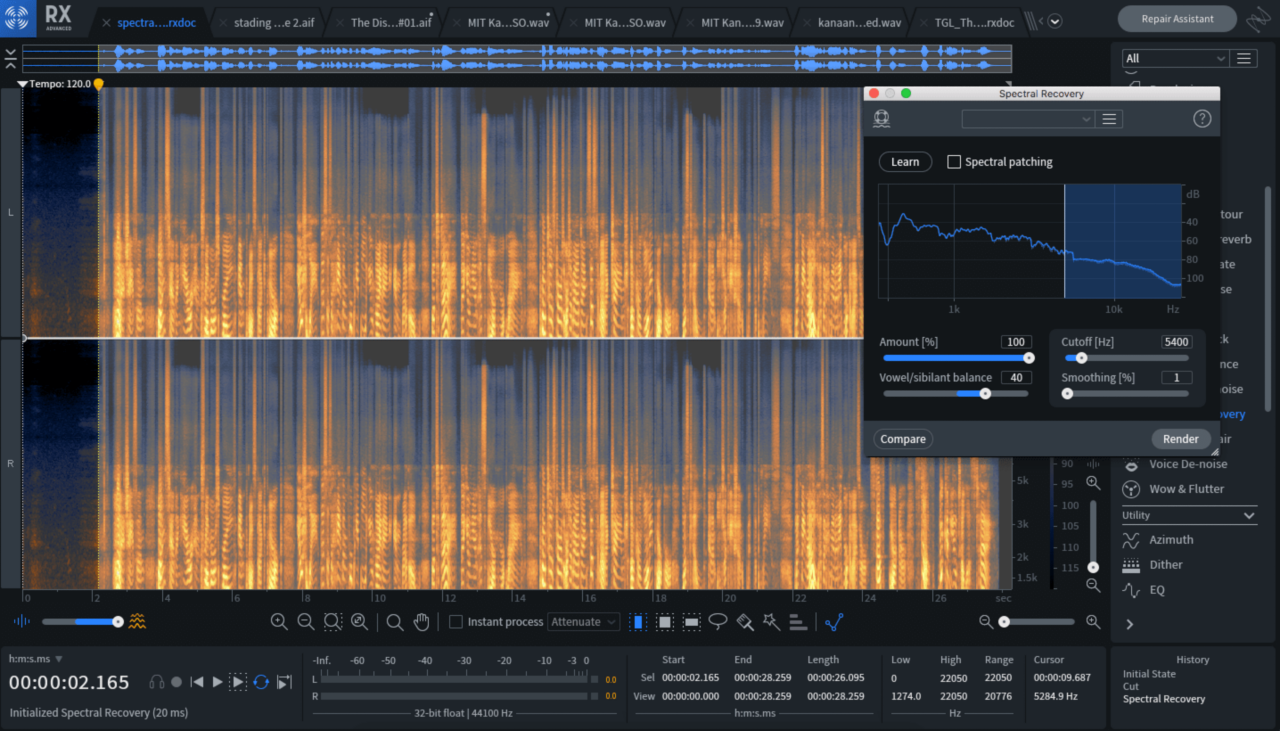 Voice De-noise kicks in halfway through the file shown above. The playback head marks the start of processing.

It’s a lot more pleasant, and we can even use further processing to make it sound more natural. We could, for example, open up Neutron 3 in the Plug-In module, and then add some tight EQ notches to target high-frequency resonances. We’ll compress, limit, fill out the lows with some excitement, and also use the Sculptor module to further shape the high-end. It looks like this: 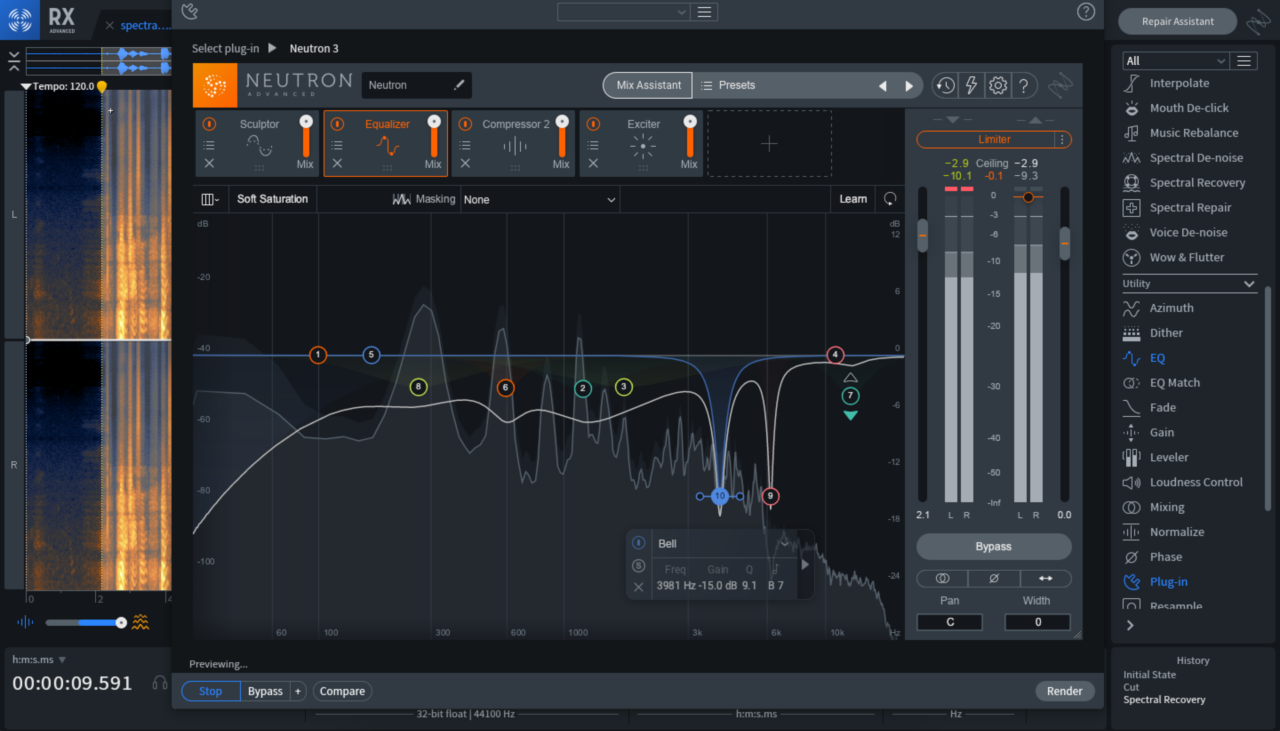 Further processing with Neutron 3 in the plug-in module

So you can see, if you take the time to pair this module with others, you can get a lot out of it. Don’t sleep on the Spectral Patching checkbox either—it can help fill in spectral gaps, and I’ve noticed helping my restorative VoIP endeavors as well.

The wizards at iZotope decided to focus their beloved denoising algorithms on a common problem in the mixing process: unnatural sounds coming from guitars and guitar amps. Guitar De-noise aims to deal with these sounds in three different ways.

Look at the module and you’ll see it’s split into a trio of processes: 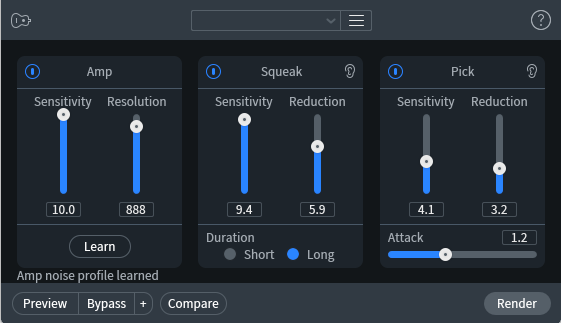 Let’s start in the middle, with Squeak. If you’ve ever played or worked with an acoustic guitar, you know their fingerboards make noise. Enter the Squeak section of Guitar De-noise, which is designed to target these fingerboard noises and intelligently turn them down. It’s almost like a de-esser for your fingerboard. Observe this sound.

It’s plenty squeaky. Let’s see what Squeak can do. We’ll start by dialing in a setting. 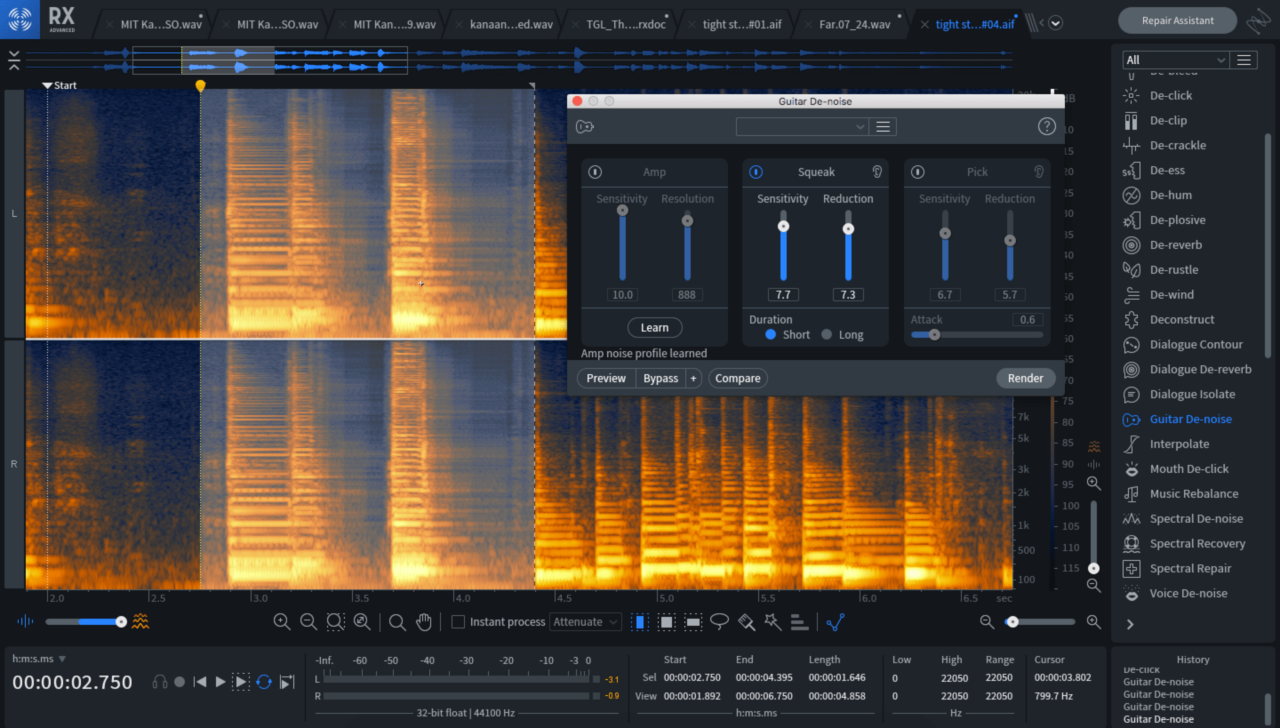 How do we know what kind of setting to dial in? Well, if I click on that ear icon in the top right, I can listen to the squeaks on their own.

Confident that the squeak will be dispatched to the realm of winds and ghosts, I can now render with ease, and get the following results:

If I want to, I can go further. I can reconstitute the original ambience by grabbing an ambience profile with Ambience Match, and then processing the de-squeaked areas: 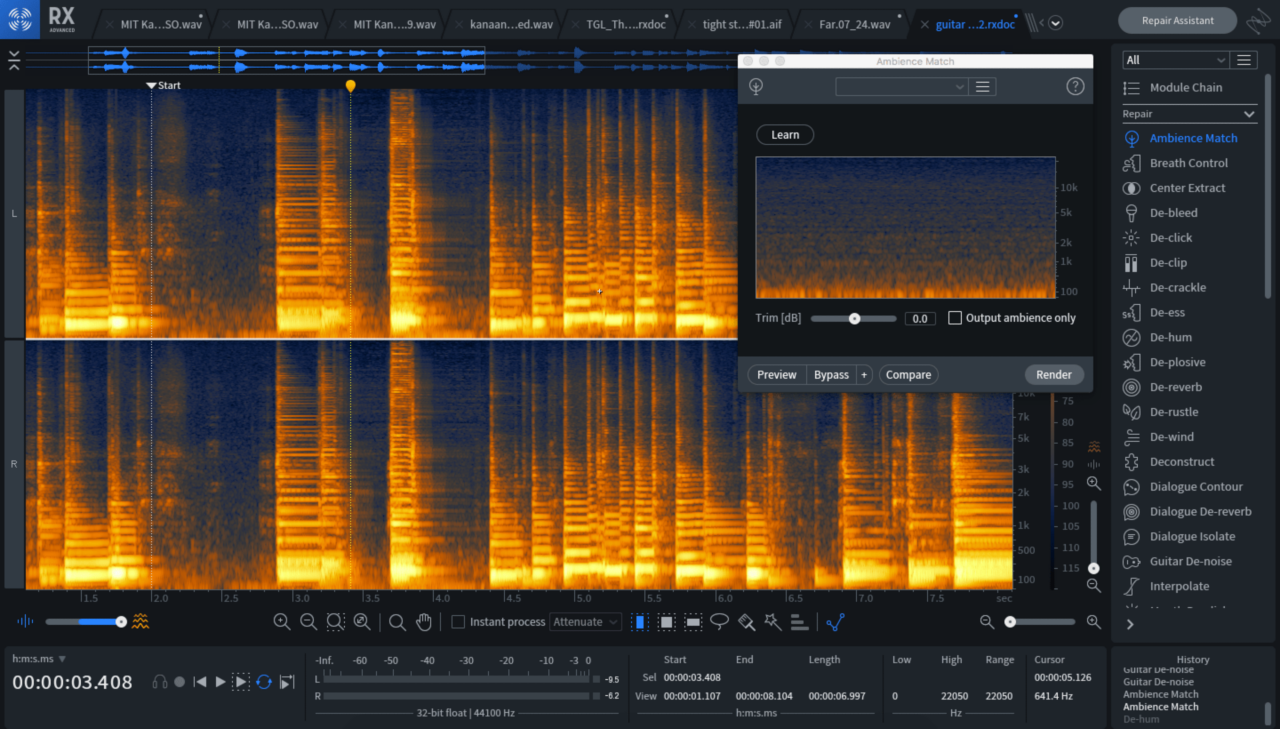 Let’s move on to Pick.

Pick is designed to mitigate unwanted plectrum noise. If Squeak is the module’s de-esser, you can think of Pick as the “de-clicker.” It works similarly to Squeak, providing Sensitivity and Reduction sliders.

Let’s observe it in action. Check out this quiet guitar part, ruined by some stray picking right at the beginning.

I go in, and configure the following parameters on Guitar De-noise: 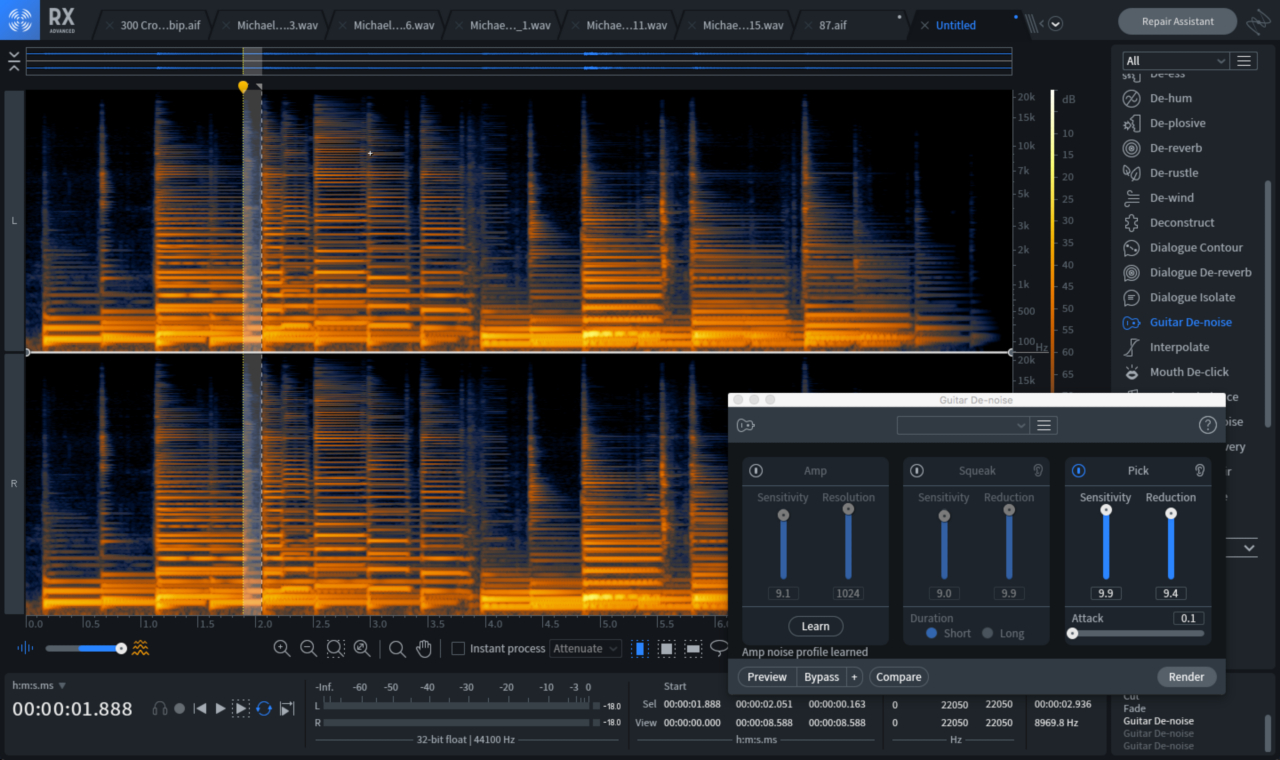 We’re left with this:

There’s a ghostlike noise in there now, but guess what? This sounds a bit like a squeak to me. Let’s see what happens if we deploy the Squeak algorithm. Using these two processes in tandem, we got something totally usable. If you didn’t know it ever existed, you’d never know the pick was missing.

Finally, the Amp section: this de-noiser is quite useful and simple to use. It can learn the background noise profile of your amp and create intelligent noise-profiles to cut them out in a manner more sophisticated than the traditional noise gate. Take your noisy electric guitar recording, like so:

Note how the amplifier gives us some buzz. We might have trouble if the part is rather naked in the arrangement, so we’ll turn to the Amp algorithm. First, we select a bit of amp noise on its own, like so: We click the Capture button, hit render, and here’s what we’re left with:

As you can see in the following screenshot, it leaves noises like palm mutes or fret chokes alone. It merely cleans up the background noise quickly, easily, and effectively. 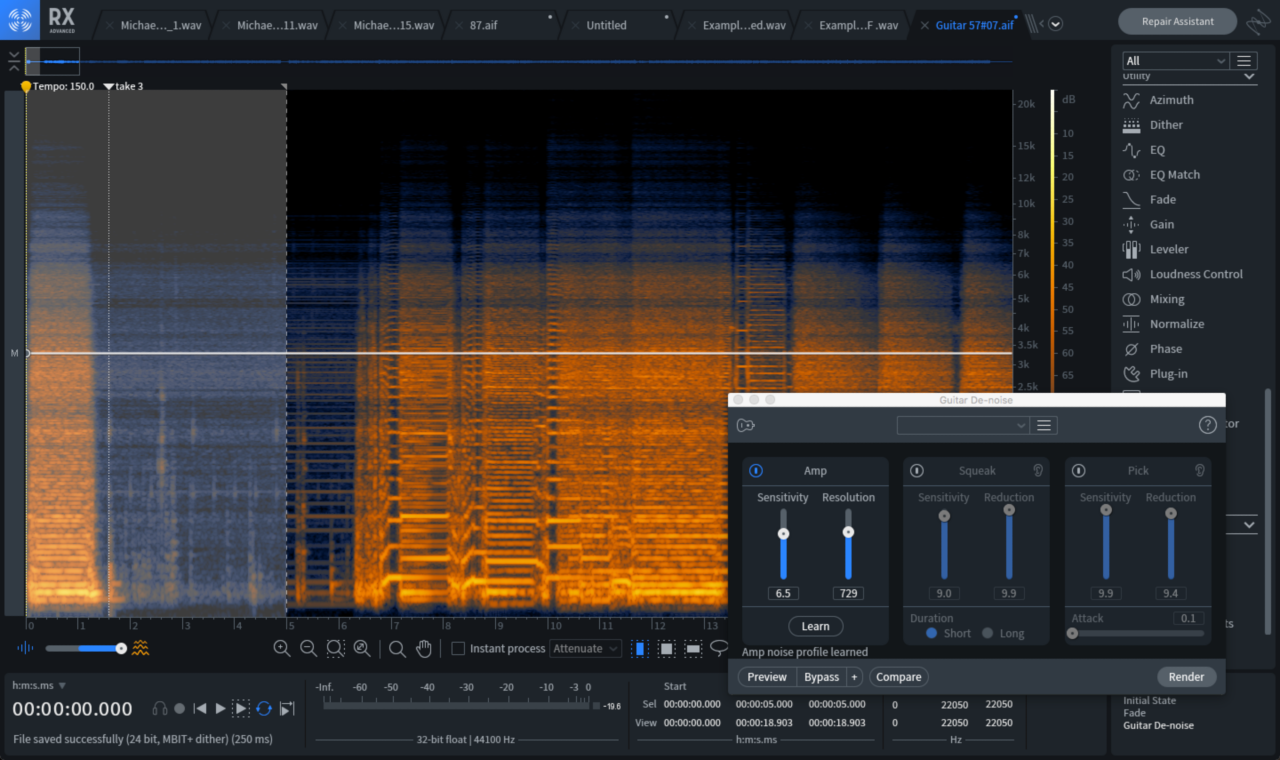 I would be remiss if I didn’t mention the creative possibilities of Guitar De-noise. Yes, pushing this module too far will produce a less-than-satisfactory result for the purpose of transparency. But if you’re anything like me, you might actually like the overpushed sounds you can create with this module in creative applications.

Indeed, abusing this processor yields crazy effects that, in the right context, could net you a new kind of sound.

Take this block of chords:

There’s nothing really to process here in the realm of good—but if we have evil on the brain, we can have a lot of fun. I can run the passage through Squeak and Pick just for laughs, and I wind up with this:

This is the building block of an interesting, novel bit of ear candy for the right mix.

Mastering engineers often have to work with tape—and sometimes that tape is prone to problems, mainly due to age. We can hear issues such as “wow” and “flutter,” both of which embed strange pitch drifts in the original tape that feels woozily out of tune.

Mixing engineers also receive badly-recorded, digitized tape from time to time, and when this happens there are only really two options: purchase exceedingly expensive software whose price can rival that of a used Honda Civic, or accept the pitchiness for what it is, and try to find ways to emphasize it constructively in the mix.

I lie to you, for there is now a third option, and that option is RX’s Wow & Flutter module. This module allows for transparent pitch correction of such badly mangled tape. How does it sound? Let’s see for ourselves.

Below are some strings with audible, wowing and fluttering pitch issues:

You can hear it there, and you can also see it in the readout: Wow and flutter in spectrogram display

The lines waiver, and the pitch waivers. So let’s see what we can do: That’s wow addressed. But let’s look for some flutter. Flutter is a phenomenon that sounds “faster” than wow. I think of wow being akin to the slow speed of a Hammond B3’s Leslie speaker, and flutter sounding like the high-speed. With the Wow & Flutter module, we’re trying to put the brakes on both.

The Flutter algorithm is designed to handle quicker pitch variations. Observe this example:

This has already been evened out with the Wow algorithm, but listen carefully to the top line of violins: they warble, and it’s more than the usual vibrato that violinists use. This seems like something we could correct with Flutter. 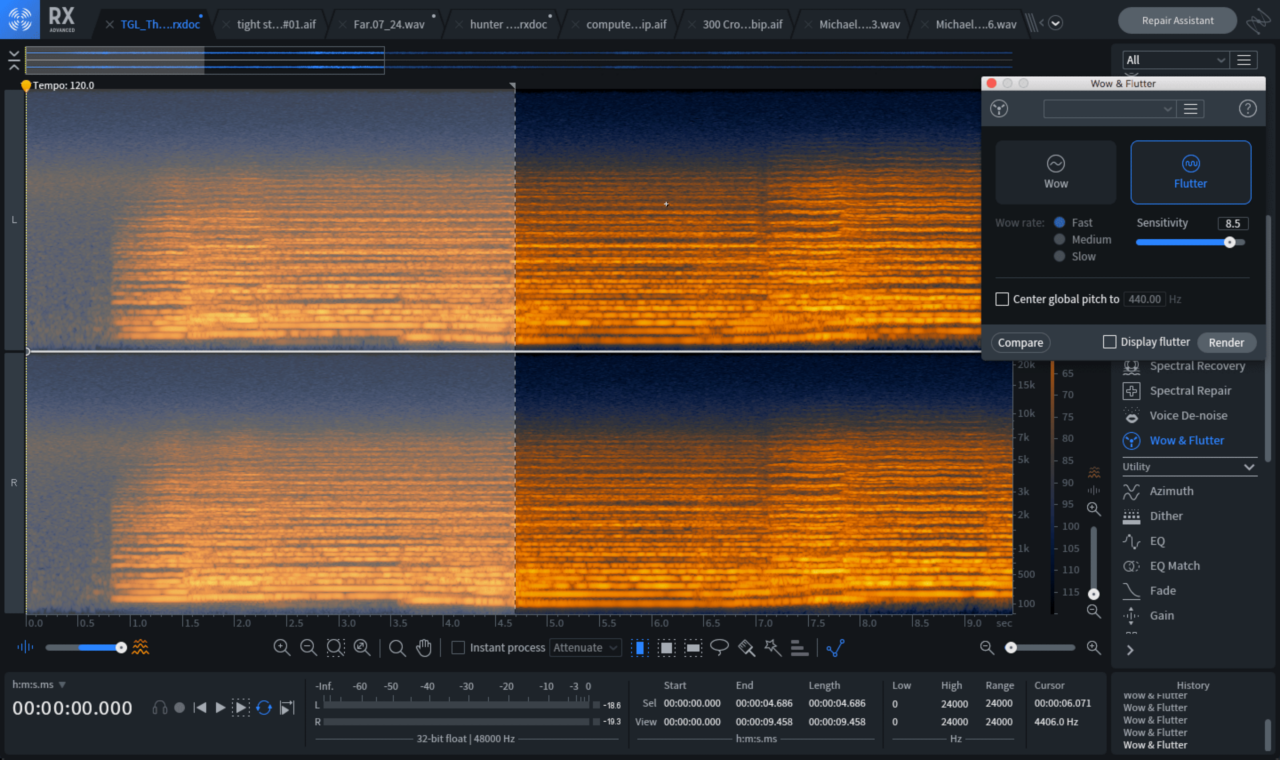 It’s subtle, but if you concentrate on those violins, you can hear that the pitch is more stable.

We haven’t spent time talking about RX’s other improvements, such as the overhauled Batch Processor—perhaps we can do that in another article. But I’d like to leave you with a final word of advice: spend time learning these modules. Don’t judge them all at once. Spectral Recovery, in particular, avails itself to you over time.

The nature of problematic audio is that one size doesn’t fit every problem: you have to tinker and tweak. It’s quite easy to load stock settings in Spectral Recovery or Guitar De-noise and think, “well, that’s not working.” But if you spend time poking and prodding, you’ll learn just how deep the feature-sets are. I know I certainly did—I’ve had the good fortune to employ Spectral Recovery on a few VoIP-based projects now, and I can’t even imagine how horrible the audio would’ve sounded without it.