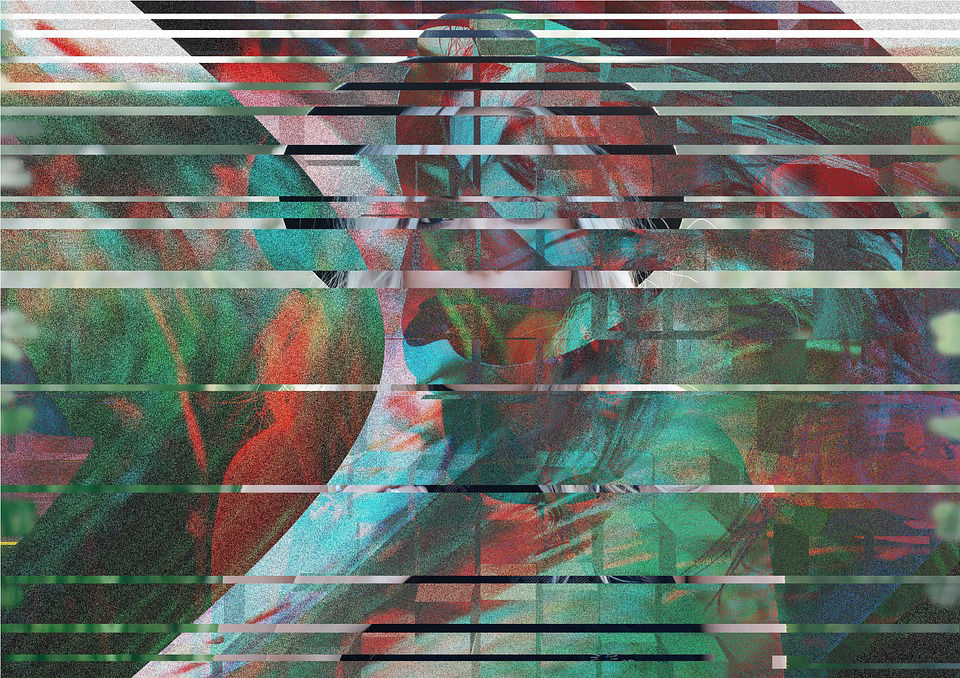 Jump to these sections on distortion:

Distortion can be a powerful tool for audio engineers. In the right hands, distortion can add all sorts of flair to a track, fill out thinly recorded signals, and help a mix sound loud without reading loud on the meters. But unintended distortion can absolutely ruin a track. That’s why we have so many articles on how to repair tracks with unwanted distortion. In this article however, we’ll cover what distortion is and its different use cases in the mixing process.

Follow along with this distortion tutorial using plug-ins from iZotope Music Production Suite.

What is audio distortion?

Distortion refers to the altering or deformation of an audio signal’s original waveform. Technically, any kind of audio processing (EQ, compression, time-based effects, etc.) alters an audio signal, but in audio production, the term is used to describe either intentional or undesired sonic destruction.

Distortion as a creative effect

When distortion is intentional, it’s used as a creative effect. Think of audio distortion effects applied to vocals, guitars, drums, and other instruments. Some audio engineers also like adding subtle distortion into an audio signal with plug-ins to emulate the warmth and pleasant harmonics of analog gear. In Neutron, you can add the Exciter module as an effect in your signal chain to tastefully apply distortion.

Distortion, however, can also be an unwanted result of overmodulating a signal past its clipping point. In other words, a signal distorts whenever it exceeds the maximum level an audio system can handle. Specifically, this is known as clipping distortion and you can avoid it with proper gain staging. Gain staging ensures that every track in your DAW is set to an optimal level to prevent clipping and noise from getting introduced into your audio.

Sometimes, you’ll need to repair a distorted audio file. Maybe you’re working with files that weren’t recorded and mixed properly and you don’t have the option of redoing any of it. If that’s the case, you can use an audio repair plug-in like RX to surgically remove unwanted distortion and background noise from audio. Check out our video tutorial on how to use RX to remove clipping distortion from audio recordings:

Here are a few kinds of distortion you might come across in mixing and mastering.

Harmonic distortion refers to what happens when a processor (analog or digital) adds to or enhances the overtones of the original signal. As a reminder, overtones are multiples of the base frequency—or fundamental. So if the fundamental is 100 Hz, overtones would occur at 200, 300, 400, etc. Hz. As the overtones increase in level—or, as more overtones are introduced—they rub and resonate against the original signal. It can appear subtle and warm, or it can become overblown and edgy. Either way you cut it, you’re working with harmonic distortion.

Transformers and tubes are examples of analog components which, when pushed hard enough, add these kinds of harmonics. Tape saturation—in which you drive a real or virtual tape machine—also adds harmonic distortion.

Harmonic distortion can “fill out” or “bolster” a weak frequency range without tilting the apparent tonal balance too much. But pushing hard into harmonic distortion can color the sound more than you’d want to. And, it’s such a seductive effect that it’s hard to know when you’re overdoing it.

Clipping distortion refers to the act of overloading a processor—of pushing it beyond its maximum capacity or operating level—and creates a type of harmonic distortion. In the analog world, this results from driving a piece of gear beyond its recommended—or specified—capabilities.

Digitally speaking, clipping distortion occurs when pushing a signal above 0 dBFS (the digital ceiling) in a fixed-point system. Common fixed-point bit-depths include 16 and 24-bit, although these days almost all DAWs operate at 32 or 64-bit floating point for internal operations. Floating point systems have much higher clipping points—like over 1,000 dB higher.

Both analog and digital clipping can sound really cool when done well, and they can make signals appear louder without using additional headroom, or conversely retain their apparent level while using less headroom. But they can also generate inharmonic components that color sound in a horrid way. And, without proper monitoring, it can be hard to distinguish a good amount of clipping from too much clipping.

While harmonic distortion adds musically related overtones to a signal that can sound quite natural and pleasing in a reasonable amount, inharmonic distortion is sort of the opposite. It adds frequency components to the signal that are not musically related to the input, and can often sound quite nasty, or grungy. Sometimes, a little grunge is just what the doctor ordered, other times it’s best avoided.

Intermodulation distortion—or IMD—creates tonal products that are both higher and lower than the original frequencies in the signal, and with a full frequency signal like music, this can quickly turn into a noisy mess. The tricky thing about IMD is that it often accompanies harmonic distortion, so making sure you strike the right balance is an important skill to develop.

Aliasing is a digital phenomenon, occurring when the frequency content of a source is higher than half of the sample rate. This point of no return is called “The Nyquist Frequency” or simply “Nyquist.” Instead of being captured and printed, these “too high” frequencies bounce back down upon hitting Nyquist, and become folded into the audible band in an unmusical, inharmonic way.

So if you’re recording at 44.1 kHz, any signal present above 22.05 kHz would alias. When recording an analog source, whether with a mic, instrument DI, or through analog hardware, this isn’t typically a problem. This is because any analog to digital converter worth its salt includes an “anti-aliasing filter” to removed frequencies above Nyquist before they get turned into a digital signal. However, because so many nonlinear processes create distortion well above 20 kHz, aliasing happens frequently in a purely digital environment. Now observe what happens when I add subtle harmonics with a distortion plug-in commonly used in mixing. Sine signal with its head cut off 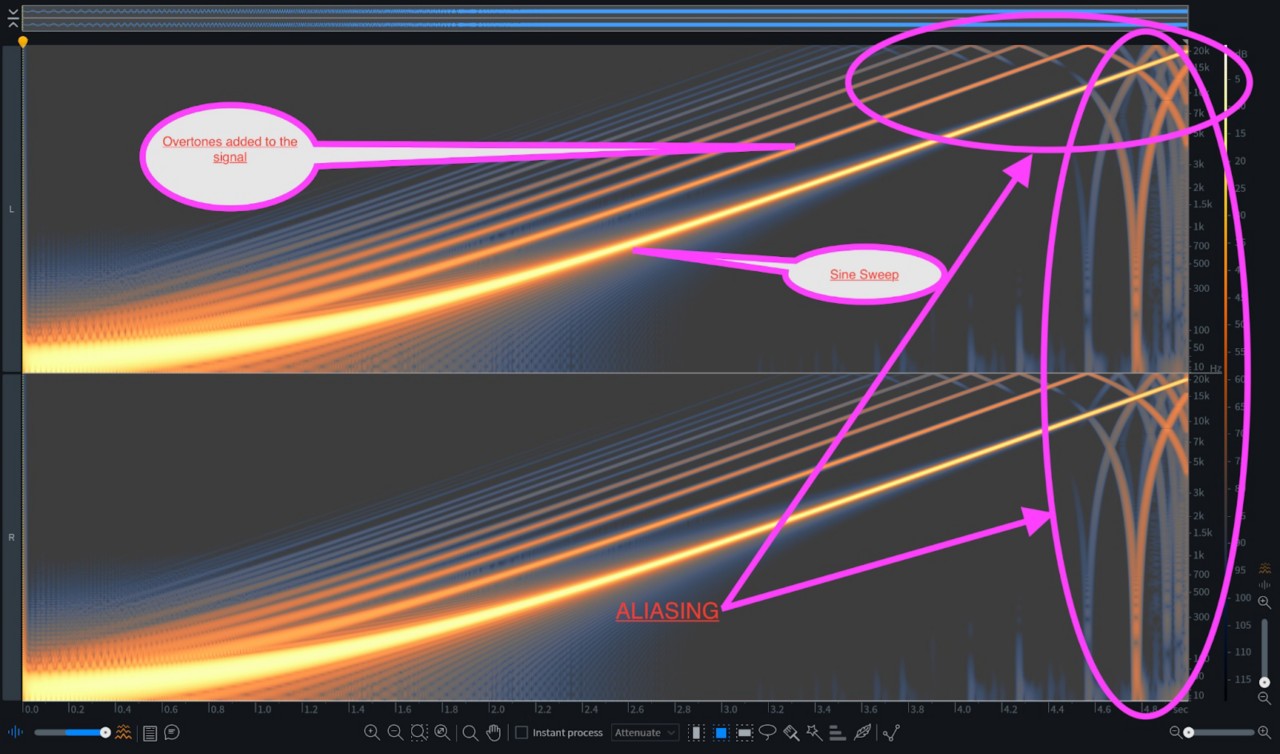 All of that circled stuff that looks like it’s reflecting or bouncing back down is aliasing.

Bit-crushing is a fantastic sound for the right situation. But when it doesn’t work, it really doesn’t work.

These are only some of the most common distortions you’ll encounter in the engineering process, but they’re enough to cover some useful tips. They’re also good umbrellas: “overdrive”—the effect found on most amplifiers—might seem like its own thing, until you realize it’s a form of clipping distortion.

Why and how we use distortion in mixing and mastering

There are many reasons to apply distortion in both mixing and mastering scenarios. Using iZotope plug-ins, I’ll show you some frequent situations where distortion can help, and how to achieve the desired effect.

Observe this vocal from Pete Mancini, which he recorded in his home studio.

This is a good capture of him singing while playing an acoustic guitar, but we do have some issues endemic to many home studios. First, the room is a bit noisy, but we can RX that out. The room itself emphasizes some frequency blooms in the 8 to10 kHz range; spectral processing can help with that.

Some EQ, and little compression, and some song-appropriate verb, and we have a vocal that’s nearly there:

Good stuff—but there’s more to do. We’re now losing something in the low midrange. It’s subtle, and an EQ boost might tilt the balance. Instead, lets fill it out more. We’ll use Neutron's exciter with the following settings: 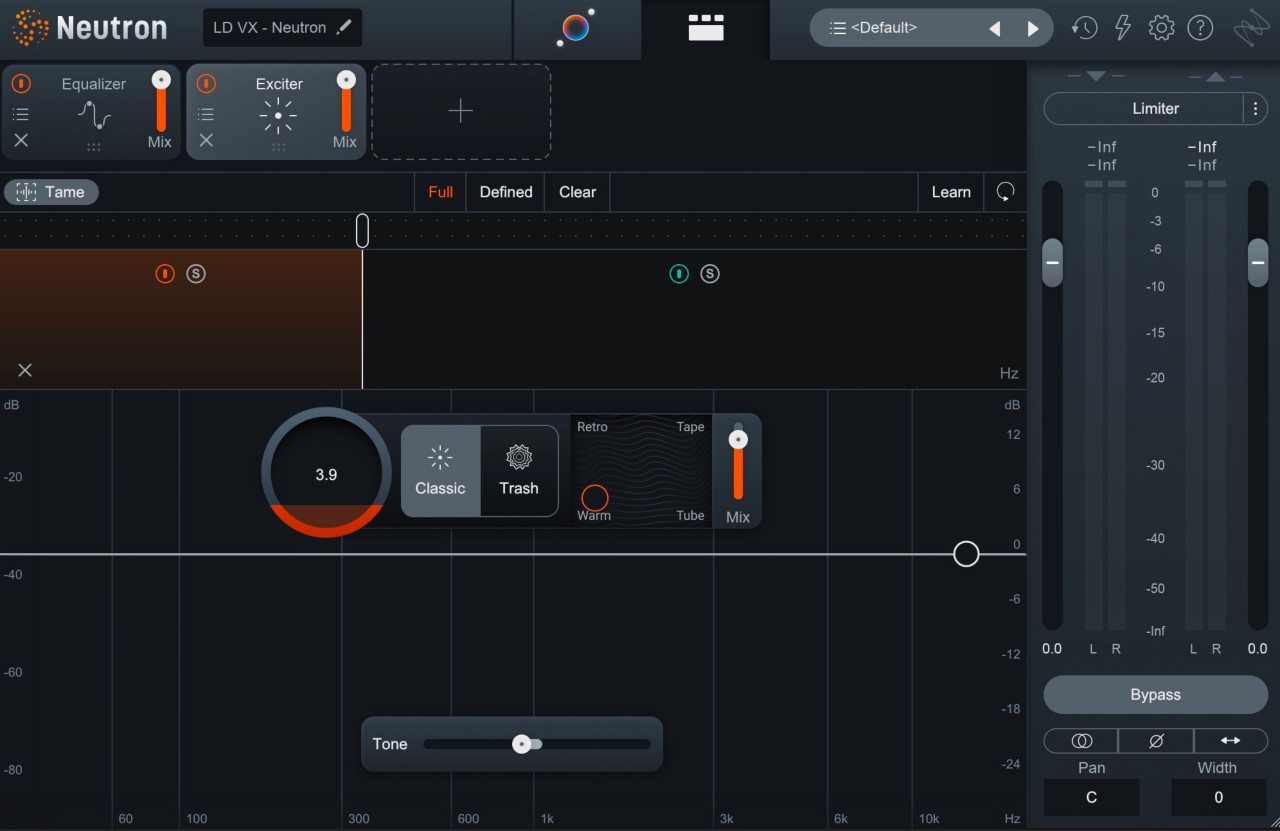 The meat of the vocal is now enhanced, but it’s not overblown—and that’s what distortion, can get us when used as harmonic enhancement. You can use it on the lower frequencies, like I did, or use them to fill out the high-end as well.

Using distortion for a lo-fi sound

Sometimes we use distortion as a way of recreating the sound of low-fidelity recordings to achieve a vintage aesthetic.

Aliasing and truncation distortion can get us a certain kind of lo-fi sound reminiscent of early digital systems. As an example, here’s a programmed drum loop supporting some acoustic guitars:

If I wanted to “bit-crush” this sound, I could use Nectar’s Saturation module in Decimate mode to get that kind of effect: 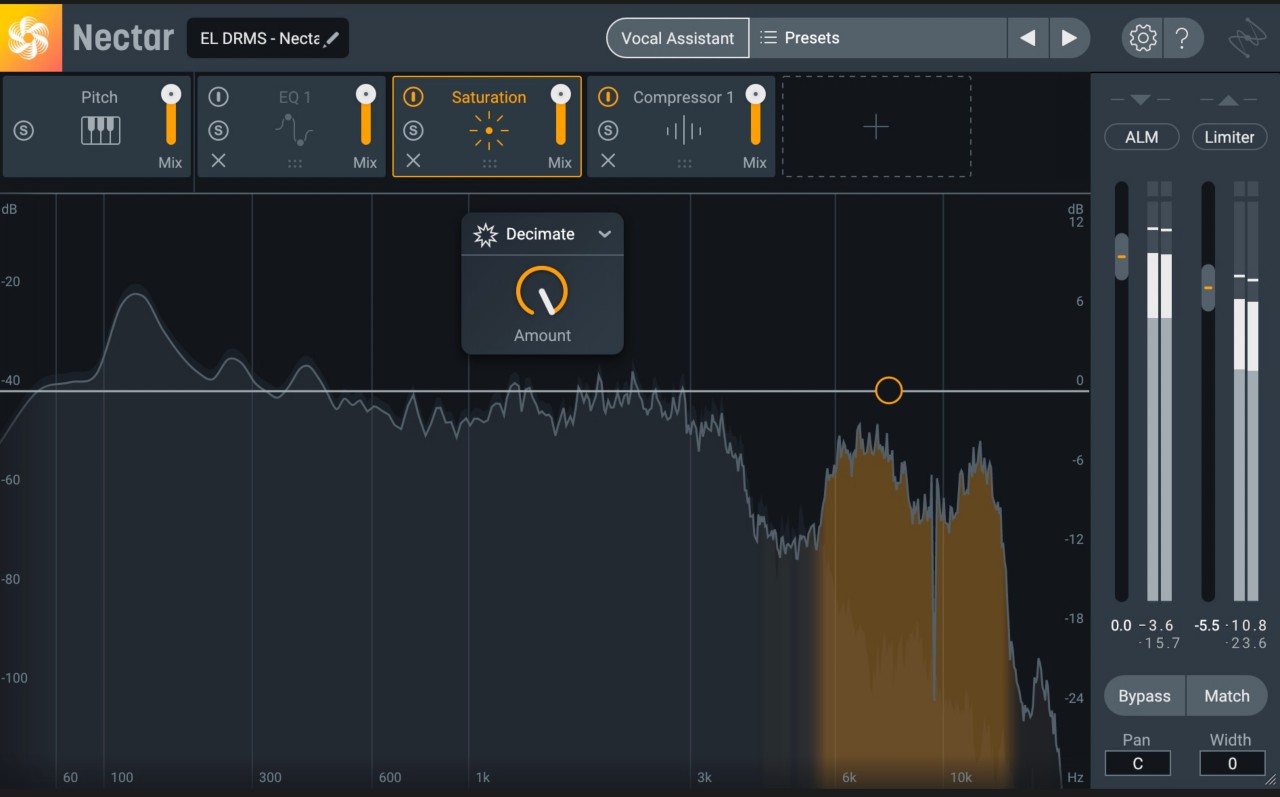 Now, if we wanted a more analog-inspired lo-fi aesthetic—like a transistor amp being overdriven—we could turn to Neutron’s Exciter module in Trash mode. 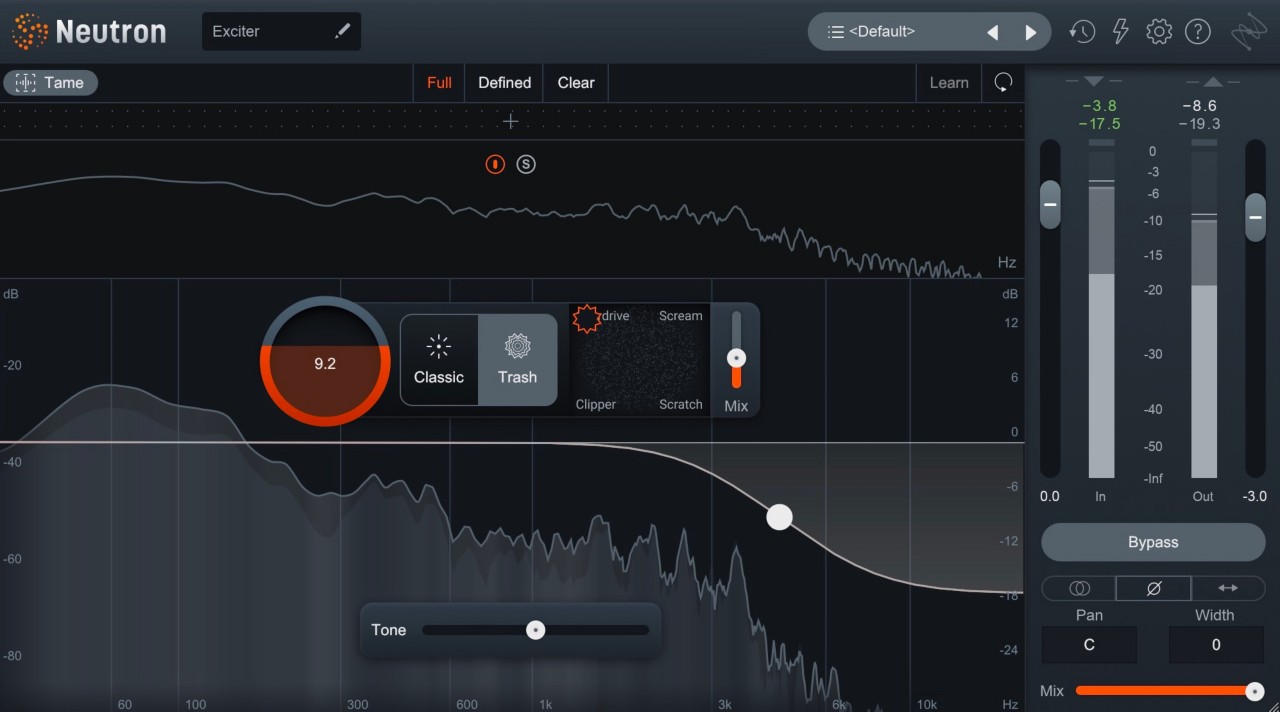 If we overloaded a tape-machine emulation plug-in, such as the Vintage Tape module found in Ozone, we could also achieve a lo-fi sound.

In this case, the tape effect preserves the high end better than what we did with Neutron’s Trash algorithms—yet it still sounds old-school, which is the goal with any lo-fi effect.

Distortion can also restrict dynamic range in a subtle way. Distorted guitars, for instance, are naturally compressed, which is why compression on top of them can be gratuitous.

I’ve actually demonstrated how distortion compresses the sound with Ozone’s Vintage Tape module in the previous example. As we drive the “tape” harder, the signal compresses more. I can show you exactly what I mean when I run my tape settings through Plugin Doctor: 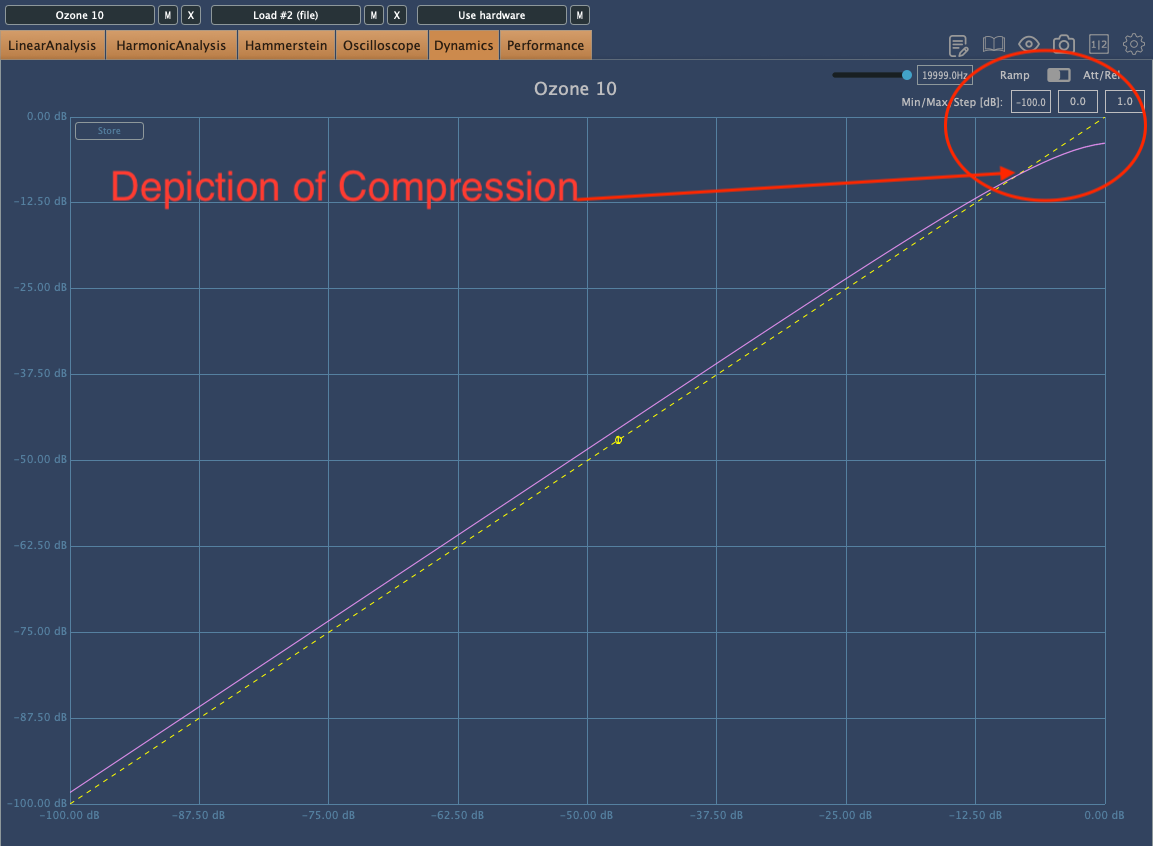 This is a form of frequency-specific compression, which I can demonstrate in the video below.

Unlike traditional compression, this effect doesn’t add attack or release characteristics to the sound, giving tape compression an inherently naturalistic feel. It’s worth mentioning that tape does have quite a few nonlinearities that all interact, and the compression effect is only part of the overall sound, but it sure is a nice part of it!

Distortion can also round off transients, and this can be helpful to achieving a louder mix without killing the impact entirely. I’ll show you how using Ozone’s Exciter on the drums.

Get started fuzzing things up with distortion

This article shows off some of the more common ways to apply distortion in the mix. Use them as a foundation of sorts, and build off of them to create your own takes on this classic effect. Just remember to distort responsibility: if you think it sounds great in the moment, do yourself a favor and back off the effect by ten percent. Then ask yourself if that’s enough. Chances are, it is!

And if you haven't already, feel free to try all of the different types of distortion available to you in iZotope Music Production Suite.