Learn how to mix kick and bass:

Equip yourself with essential mixing tools:

A big low end with a well-balanced kick and bass can be the crucial element where a mix can really grab your listeners, but it’s also the place where producers and engineers can find the most frustration. This is why it’s essential to know how to mix your kick and bass.

Real punch and power are there to be had, but often the sounds just end up getting in the way of each other, and we wind up in the mud. If you’ve encountered projects where the kick is lost, or the bass disappears behind, you know this pain.

Fear not, we’re going to share some tips on how to mix kick and bass together to make your low end punchy and clear, while making space for everything to stay big present in the mix.

Follow along with iZotope Neutron, a powerful all-in-one mixing tool.

The areas between 20 Hz–160 Hz typically host the most energy for kick drums and basses. The kick is the lowest tone of any percussion set, so it will always have some overlap with any bass sounds. Those overlaps are the source of 90% of the frustration we encounter in mixing.

This leads to a masking effect where multiple sources layer over the same frequency range, and wind up sapping the energy out of each other. 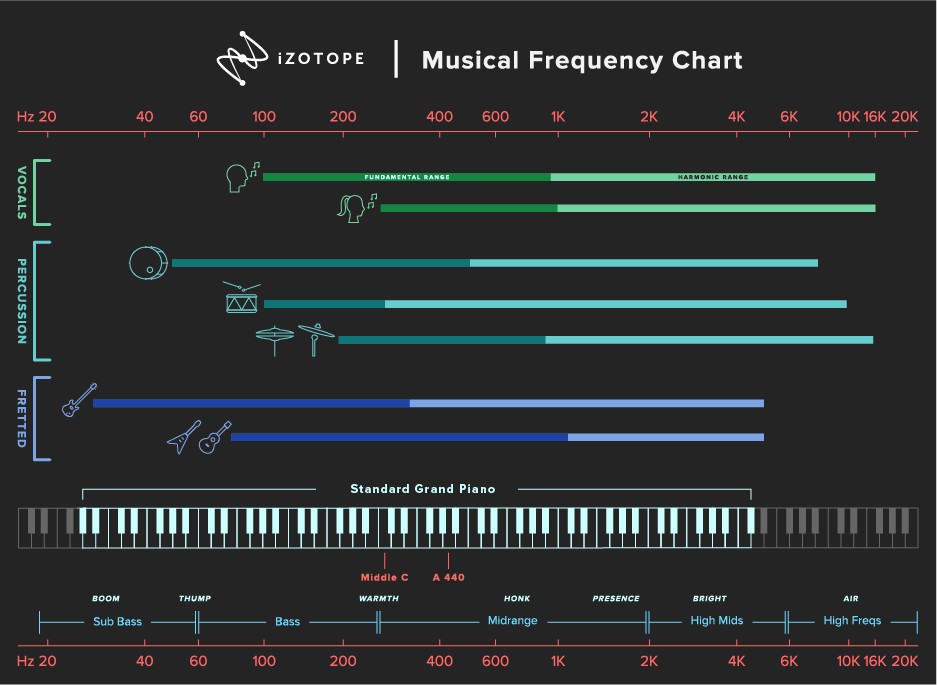 Let’s listen to an example of where a kick and bass are fighting each other and making a muddy resonant low end. This is the kind of low end that will overload a mix, and make it very hard to achieve clarity.

Masking Between Bass and Kick

We can improve this by getting a better understanding of where masking is occurring in our mix. To see it more clearly, we’re going to use the Neutron Equalizer on the bass in our example. 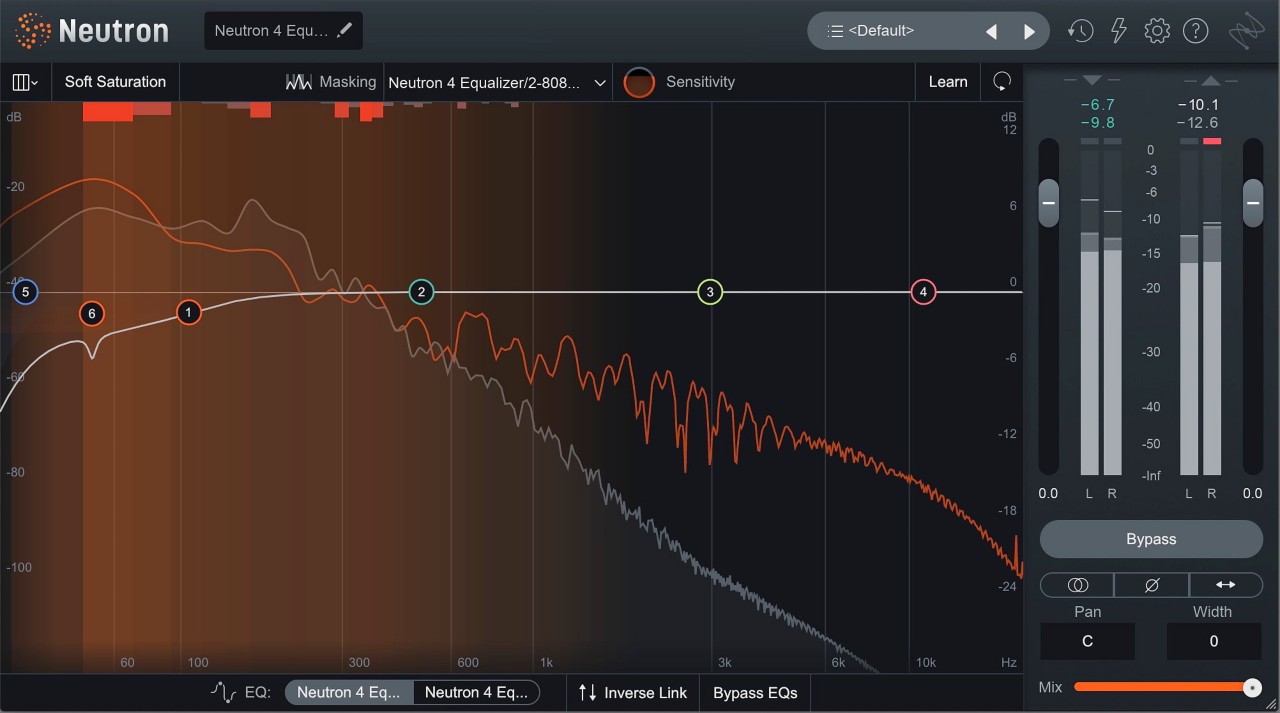 Frequency masking identified in the kick and bass in bright orange

You can see the masking occuring with the bright orange indicators in the EQ module.

We'll then go to Neutron's Unmask module to easily take care of any frequency masking issues.

Here is what the Unmask module can do in clarifying and mixing bass and kick. 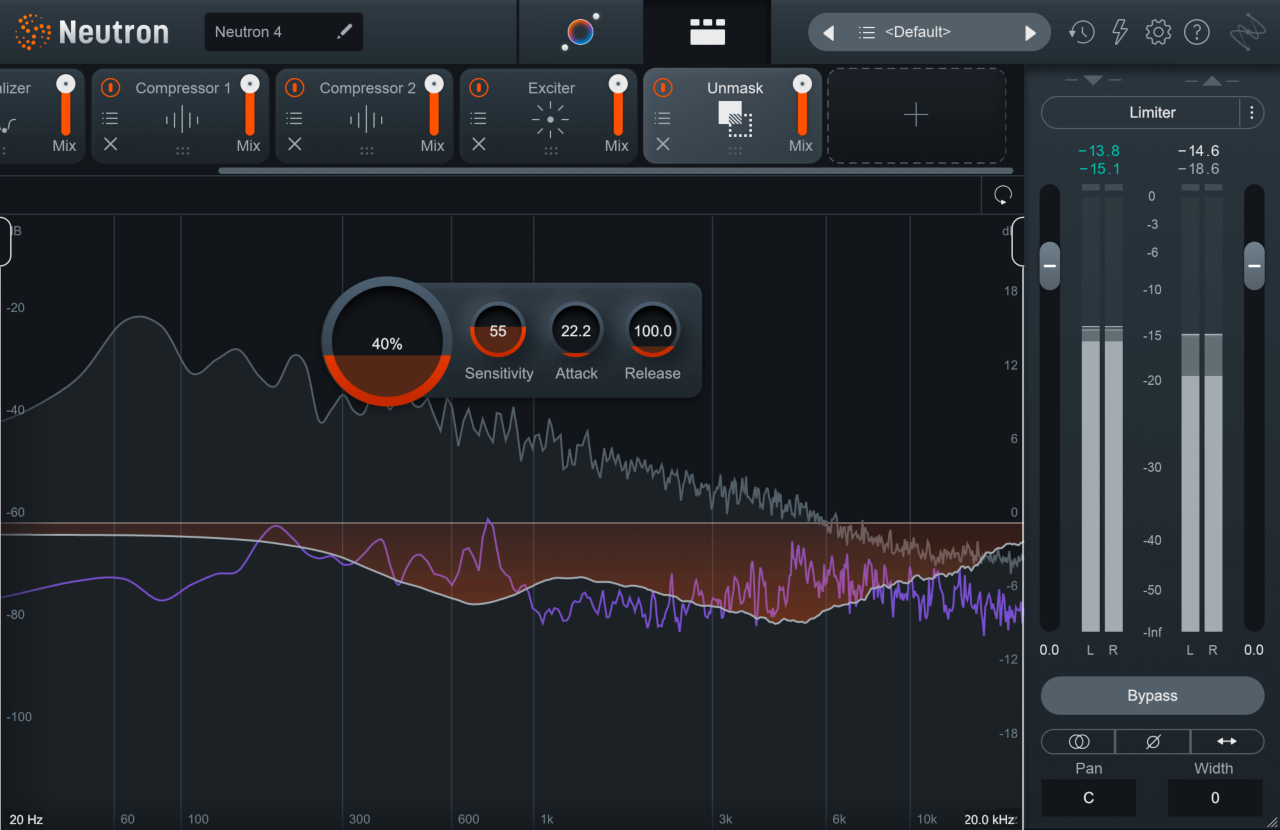 Mixing is always a matter of making choices. We have to choose which sounds get prominent places in a mix, and sometimes multiple instruments are fighting for the same places. We need to choose a winner in certain moments, and other sounds can “win” at different moments.

A kick drum will almost always have a relatively fixed sonic profile. They may have variable patterns, but they will normally hit the same pitch each time. That makes one choice very easy—the kick gets to “win” here. Therefore it will stay prominent, and the bass will get the EQ treatment to make space for the fundamental frequency of the kick.

We’ve said that in the game of choices when mixing, we need to choose a “winner” between sounds at certain times. There’s a very important distinction in that last part. What happens when the kick isn’t playing? The spaces in between kicks are fair game. And this is where you’ll find a lot of opportunity to fit your bass sounds around the kick.

What happens when our kick and bass are hitting at the same time? If we’ve made good choices with our EQ, then dynamics can help with the rest. Sidechain compression will help us duck one signal when the other plays. In most cases, it will be better and easier to duck the bass when the kick plays.

You might have heard about sidechain compression, and you’ve most definitely heard it used to some degree in EDM, sometimes to extreme effect. Sidechain compression can get a bad rap because it’s a bit of a blunt instrument, but with Neutron you can be more surgical and get far more effective results with fewer unwanted artifacts.

In this mixing bass guitar and kick drum example, we’re going to use the compressor to duck specific frequency bands rather than the entire signal.

To do that, we’ll use the Neutron compressor module on our bass channel. We’re going to select the input as our kick channel, and then in the low band, we’ll click the bottom tab that says “Ext. Full.” This will allow the full sound of the kick to duck just the low band of our bass. 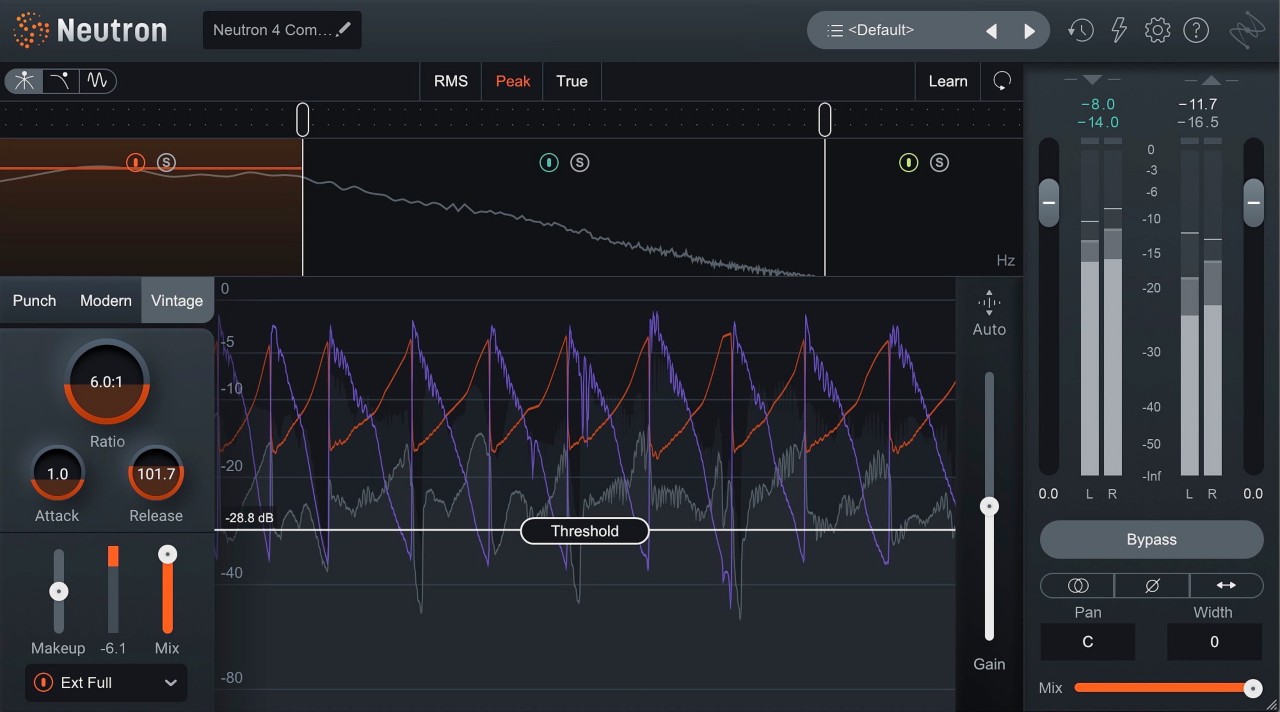 Here's what sidechain compression used on kick and bass sounds like:

This last suggestion is not about the mix, but for the composing stage of production. Kick drums have a pitch—even the shortest, noisiest examples. That pitch can work with your bass line, or work against it. Some options for getting them to work together could include tuning a kick to a note that matches the key of your track. This could create a sense that all of the low end works together while the transient of your kick still has a percussive energy.

Another option is to shift your bass notes to fit around the fundamental frequency of the kick. The kick in our next example is from a classic Roland TR-808, and it has a fundamental frequency around 50 Hz, with harmonics multiplying up at 100 Hz and 200 Hz. That places it just between G and G# on the scale. Therefore we can choose which note it matches to avoid letting these frequencies overlap too much with our bass notes. We can tune the kick up or down, and then transpose our bass up or down to see which works better.

Another option is to change the decay of our kick to be shorter, and to adjust the timing of the notes in our bass line to avoid playing at the same timing as the kick.

Here are some examples:

This version has a short kick decay, and the notes begin and end with slightly different timing to make space for the kick to push through more easily.

Kick and Bass with Short Decay in G Min

This version has a combination of a shorter kick, shifted note timing, and is also transposed up two steps to bring the bass higher than the fundamental of the kick.

Kick and Bass with Short Decay in A Min

The second example sounds a little more cohesive to the overall mix, all while giving the bass and kick their much-deserved space from an arrangement and songwriting perspective.

Try these tips, both at the mixing stage, and at the composing stage of your production. You’ll find that your kicks cut through loud and clear, your bass feels full and present, and your entire low end feels cohesive and powerful.

And if you haven't already, give Neutron a try with a free demo to easily unmask your bass and kick while bringing punch and clarity.