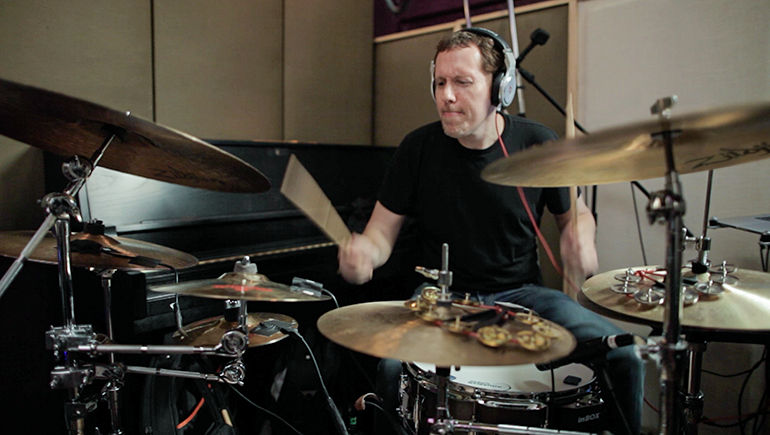 Learn crucial drum mixing techniques to help you learn where to start, how to think, and what to listen for while you’re building the important rhythmic foundation of your recording.

You’ve written a batch of great songs, worked up some interesting arrangements, tracked core instruments in a crazy weekend, spent a few weeks adding layers and flourishes, gotten a great vocal performance out of your singer, and finally, the whole album is tracked.

Which means: It’s time to mix! But, where do you start?

The first thing many mix engineers will begin shaping is the drums. They’re an obvious starting point and it makes sense: drums usually drive the mood and feel of a song.

So, let’s take a look at some tips for how to approach your drum tracks and get the most out of what you’ve captured.

The heartbeat of every great song you’ve ever shaken your money maker to is the pulse of the kick drum, and the kit is defined by how all the other pieces sound in relation. When you start EQ’ing your kick there are often a couple key trouble spots. You won’t encounter the same things every time, but if you start to hear some issues, take a look at those common problem areas to see if you can clear things up:

In some scenarios you may find that you just can’t seem to get the kick loud enough, where turning the kick up more pushes the meters into the red but still doesn’t deliver the satisfying thump-in-the-chest feeling you want. This can be a case of having too much of the wrong frequencies in the signal.

For example: a boost in the low-end will add a lot of level to the signal in areas below 40 Hz, an area that most speakers can’t reproduce well anyway. If you’re craving a bigger kick drum sound, it might actually mean carefully carving away ultra-low frequencies and muddy low-mids. These frequencies add a lot of level to the signal but aren’t as important to the sound and feeling of the kick drum. With those frequencies carefully managed, you can now turn the kick up more and find that big sound you’re looking for. As a rule of thumb, start your EQ’ing by making cuts before boosting anything.

Once you’ve found a good kick tone for your track, you can then introduce compression to the chain. Many articles could be written on learning to use compression properly (and we have written our share). At minimum, though, remember that a gentle ratio can help tame the initial click you often hear on a recorded kick drum. This will let you increase the overall volume, allowing for a louder, smoother, and more even kick in the mix.

Tips for mixing snare and toms

The relationship between the snare and kick in a song creates the back-and-forth interplay that becomes the foundation for the feel of your tracks, so it’s important to get the tones of both just right. Some snares have a fantastic round tone around 200–250Hz, while other snare drums can sound very muddy in this range.

Often, the snap of the snare that sounds crisp on its own will compete with the sibilance of the lead vocal around 3–5 kHz, which can cause problems. This is a good reason to leave your vocal track up while working on your drums, or at least remember to bring it in every now and then.

Listening to the overtones of your snare as you EQ will help you determine what harmonics might be masking your lead vocal, and where to place the EQ nodes to help emphasize the snare while staying out the way of the vocals. When compressing a snare, as with the kick, you can tame the initial transient with some gentle compression to achieve a smoother sound.

Once you add toms into the mix, how you’ll need to treat them can vary wildly depending on their original tone and character. A lot will be determined by listening to the drum kit as a whole and hearing what needs to be emphasized or de-emphasized. Generally, you want the toms to accent and bring color to the beat but not overwhelm it, so they should sound alive and part of the kit but not jump out of the speakers.

When mixing drums, some engineers will start with the overhead mics instead of the kick drum to get a picture of the entire drum set, and then bring in the individual pieces as needed. Depending on how many ambient mics you have—whether it’s a single mic, a stereo overhead, or multiple room mics—you can either use them to shape a bigger room sound or to emphasize certain pieces of the kit, like bringing out more wash from the cymbals and hi-hats.

If you need the drums in your recording to sound much wider, try using a mid/side EQ on the drum overheads to add lift in the high end on the side channel and more precise cuts and boosts centered around the kick and snare.

Percussion can be used to add rhythmic excitement, but bear in mind that too much can distract the listener from the fundamental core of your mix. Use percussion smartly and sparingly—just because you have a tambourine doesn’t mean you need a hit on every two and four.

Percussion tracks can be anything from shakers and tambourine to congas and timpani to electronic percussion. Since percussion instruments all vary in tone and often take up smaller areas of the frequency spectrum, you can usually apply more drastic EQ adjustments to make the percussion fit into the right space or cut through the mix when needed.

Compressing percussion requires much higher ratios with quicker attack and release times—ratios between 5:1–8:1 often do the trick, even though that may seem heavy on paper. When a percussion sound is too short, smoothing out the transient peaks allows us to hear the decay and character of the sound a little more clearly. You might use a release time as low as 20ms.

Avoiding the doldrums of dull drums

Mixing drums can often get treated like a drudgery that you just need to slog through before digging into all the fun stuff. Everyone wants to turn the knobs and fiddle around with guitars and synths, since that’s where you get to play with all the more interesting, sparkly, and unique sounds.

But, it’s important to remember that working on the mix of the drums can also be an exciting and creative stage of the process. It’s a chance to start putting some aesthetic stakes in the ground and to begin getting a sense for what the whole recording will sound and feel like in the end.

A recording of a drum set can be pushed in many directions, from soft and pillowy to epic and bombastic, and the choices you make when building the sound of the kit will affect the personality of the elements that sit on top.

So, embrace the process, roll up your sleeves, and start shaping your song.