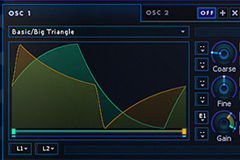 EDM producers are on a continual quest to create powerful, impactful sounding drums. Many producers — from Pendulum to Noisia to Skrillex to BT to Morgan Page and many more — have developed their own signature sounds largely based on the way their drums are mixed.

Designing a single drum sound can be quite involved, making use of everything from filters to distortions to sub-bass tones to high frequencies. Layers are key to the sound design of an effective kick, snare or hi-hat.

PRO TIP: The BreakTweaker Factory Library contains thousands of pre-layered, pre-mixed drum sounds to save you the time. Using these as source material for additional layers can help take your drums to a new level!

Raw sample libraries provide elements that can be layered, and drum synthesizers / samplers can help you out, but how do you go about it? Let’s take a look at designing two typical drum sounds using BreakTweaker, one of which is a dubstep snare.

First, it’s important to define the key elements a dubstep-style snare drum should have in order to sound competitive with the general aesthetic of the genre. It should have:

These elements can each be considered a separate layer that you have to create. Now that we’ve established that these are our layers, let’s design them! The two characteristics are going to be designed using three layers, as we will use a third layer to further enhance our high energy. Each track in BreakTweaker allows us to create and edit up to three layers for that optimum drum sound.

The final product, an effective dubstep snare drum, has a very strong frequency response throughout the entire spectrum, as seen in the spectrum analyzer.

Be sure to read the companion tutorial, on making a minimal kick.

These drums were designed in BreakTweaker’s drum synthesis engine. Try BreakTweaker for yourself by downloading a 10-day free trial.