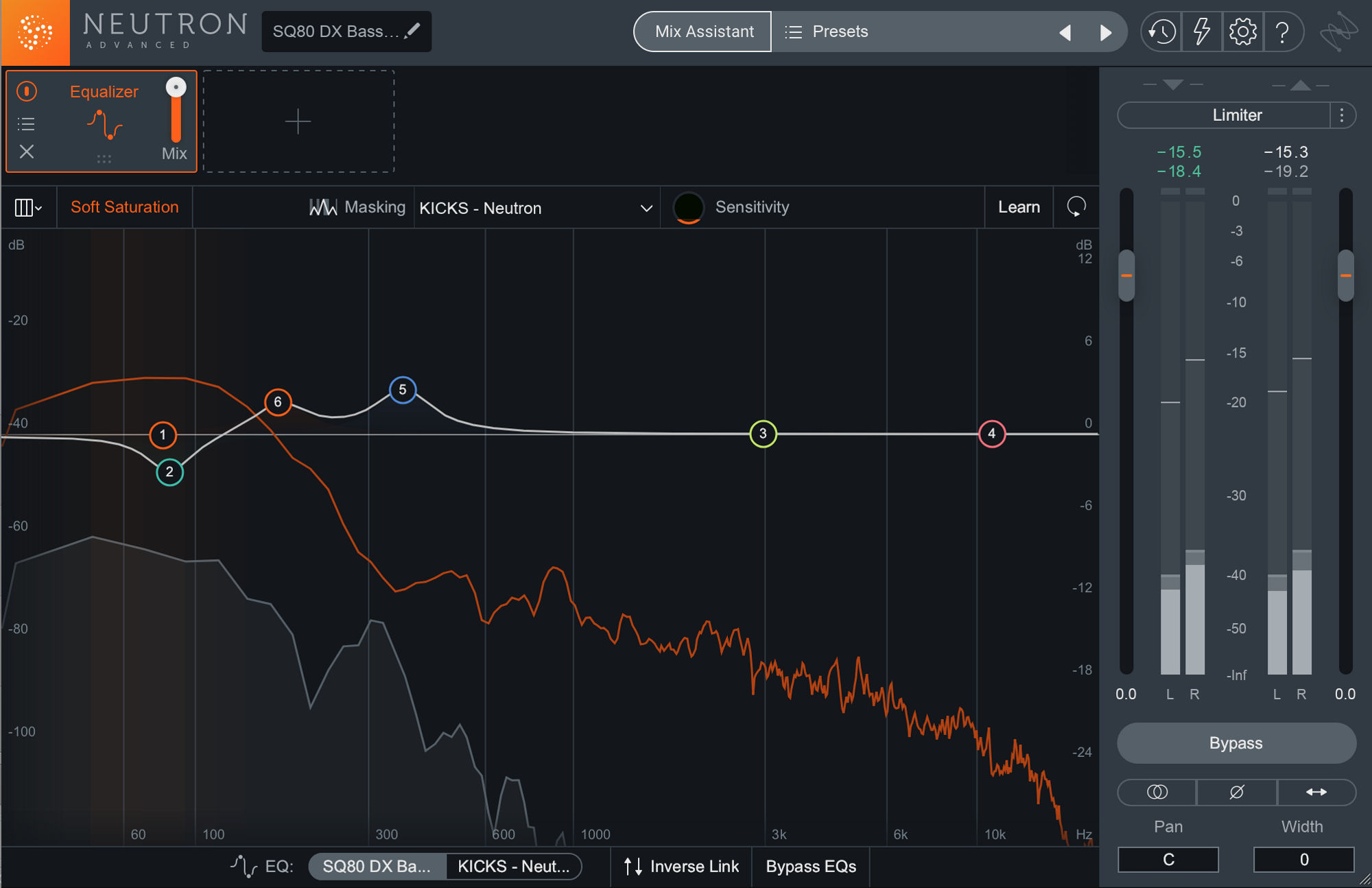 Soft saturation has many different applications, learn a few here!

You may have noticed Neutron 3’s EQ sports a parameter called “soft saturation.” The effect is subtle—if your ears aren’t catching it, you may not be sure what it’s doing. Soft saturation is meant to give you something akin to analog warmth. But how does soft saturation achieve this feat? Moreover, how and when should you use soft saturation?

Read on to find out!

What is soft saturation?

Located in the top right of the EQ’s GUI, soft saturation adds harmonic excitement to the signal. It’s not like the exciter however, which tries to emulate tubes, tape, and other sounds. This excitement is fashioned on a classic British console equalizer—and we must linger here on the nature of console equalizers.

Never forget that Neutron 3 is like a channel strip, and channel strips boast a proud heritage, stemming from the large format consoles that housed them. In a channel strip, you’d usually find a preamp, an EQ, an input trim, and a polarity switching control. Some also sported built-in compressors and gates. Whatever they had, channel strips could dominate your toolbox during the mix, especially if you didn’t have outboard gear available for patching into the desk.

What does soft saturation have to do with analog console EQs?

Much in the way certain DAWs are more popular than others—or dare I say, certain plug-ins drown out the competition—some large format consoles rose to prominence. It’s a broad simplification to say that Neve, API, and SSL consoles occupied this top-tier status in the latter quarter of the 20th century; that leaves out many different, wonderful consoles (Helios, Harrison, EMI, and Trident, to name a few).  But Neve, API, and SSL were all recognized for the different ways they’d treat audio, their different workflows and timbres. An engineer might love or hate their individual sounds—but they would nevertheless recognize each one.

Much like hardware compressors, analog EQs could be simple or complex in their construction; they could utilize different operating principles. Some sported transistors, others tubes. Some utilized integrated circuits, while others completely eschewed them.

Every design philosophy resulted in a recognizably different sound, and a different feel as well. From here stem the generalizations: APIs are often called “forward” and “punchy”, handling sound sources up to 30 dBm without any distortion; Neves are labelled as “creamy”, with an inherently “sweet” sound; SSLs are “exact”, “clean”, and “clinical”. I’ve heard them called “swiss army knives” with a “crisp” sound.

All of these descriptors are merely words until you hear a console EQ for yourself, whereupon you’d make your own judgments. And your judgments are inherently personal.

Less personal are the measure of an EQ’s curves, its phase response, or its generation of harmonic distortion. These phenomena can be observed and quantified. When you put a Neve, an API, an SSL—or any other hardware EQ—under the metaphorical microscope, you’ll see varying responses in your measurements. This becomes the scientific qualification of what we mean when we say a device has its own sound.

And now, back to Neutron 3’s soft saturation, with a more defined context: never forget that Neutron 3 is like a channel strip. It’s made of math and offers sonorous bells and whistles—but it’s still a channel strip, meant to be used as a workhorse on all your tracks. If you want to add the flavor of analog circuitry, soft saturation lets you do that in a way reminiscent of classic hardware.

Let’s have a look under the microscope.

Here’s a sine wave at 1 kHz, with a not-so-subtle 10.5 dB boost at 1 kHz. I’ve juiced the input to make the measurements easy to see, and brought down the output to make it bearable to hear. No soft saturation has been applied.

And here are the same settings with soft saturation engaged.

You can hear the grainy difference between the two, but let’s analyze what we’re seeing in the GUI. Here it is without soft saturation: And here it is with soft saturation:

Clearly, we’re seeing harmonics up the chain, around 2 kHz, 3 kHz, 5 kHz, 7 kHz, 9 kHz, and so on. These are sympathetic resonances composed of musical intervals up the scale. However, there’s more going on under the hood, and to see it, we’ll load up our trusty plug-in doctor.

Here’s what flat (no processing) looks like without soft saturation:

And here’s what happens if we put on soft saturation at a flat setting.

Wow. Already we’re seeing sculpting—a roll-off around 50 Hz, a bump extending between 50 and 100 Hz, an overall drop in level of a dB, and so on.

This means when we turn on soft saturation, we’re already working into a filter—we’re pushing into a prism of sound. To look at it, you’d think it wouldn’t work for something like a bass instrument. However, look at some bass boosts, at 30 and 100 Hz respectively. We’re at flat settings here, so we’re seeing no change in the phase. This makes sense—Neutron 3 doesn’t offer a linear phase EQ (for that, check out Ozone), but leave its settings untouched, and it imparts no phase shift whatsoever.

The flat settings of soft saturation, however, already focus the sound through a filter, as shown above. So the following result shouldn’t be surprising: Notice how the curve now moves upward in the lows, in response to how much it was cut by the EQ filter. Before you freak out, here’s a phase response of a leading Neve emulation at flat settings: Not dissimilar in the low end. Let’s have a look at our EQ’s response to a ramping signal, one that tests its dynamics. Here’s what Neutron 3 looks like without soft saturation: It’s as you would expect, completely flat. Here’s what we have with soft saturation: Notice how we’re sloping down from flat ever so slightly at the top right of the graph. This suggests a bit of slight compression—the “saturation” part of soft saturation. If I had to guess, I’d wager the console’s preamp, as well as its EQ response, is being mimicked.

From these observations, we’ve deduced interesting tidbits concerning soft saturation’s frequency, phase, and dynamic response, as well as its capability for harmonic excitement. If I were to hazard a guess at which console soft saturation is mimicking, it would be a Neve—though it’s not a 1:1 match.

But enough of this technical mumbo jumbo!

What does this mean for mixing? When would we actually use soft saturation?

Soft saturation for color, not for correction

As we’ve seen and heard, soft saturation will add harmonics and change the tonality even at flat settings. So I wouldn’t use it for corrective EQ. When implementing corrective EQ, you’re usually cutting. If you were to cut with soft saturation applied, you’d be adding harmonics in accordance to the signal you’re trying to correct. These harmonics could interfere with the very correction you’re trying to achieve.

I could see how soft saturation might sound good in certain corrective settings. Say the fundamental is too loud, but while cutting it with soft saturation, you’re actually adding a little enhancement at the octave to keep things from being too drastic. This could work for bass, and perhaps the occasional comb-filtered vocal (when dealing with comb-filtered vocals, you really need as many tools in your box as you can get).

Still, I’d recommend that you fully understand how this effect works before using it in everyday mixes—especially for corrective EQ purposes; practice with it, sure, but be careful with how you use it for client mixes when you’re just starting out. If anything, use it for applying color, which often involves boosting frequencies.

If you need to correct the source, and you’d like to implement soft-saturation down the line, you have two choices: double up on the use of Neutron 3 EQ, or deploy Sculptor before EQing and see if it intelligently tamps down the stuff you don’t like.

“Ever add 400 Hz to bass?” This is a phrase multiple peers have asked me. They mean it rhetorically; it’s better translated as, “you better start adding 400 Hz to your bass!”

Their point: If you want to pronounce the bass in a mix, it might not be best to boost fundamental. That could interfere with the kick, and cause indistinction. Also, you can help the bass cut through the mix by employing a midrange boost. This helps it feel more alive, and translates better to small speakers.

For this reason, soft saturation on bass can be of service. It’ll add something to the overtone series, even when cutting low end from the instrument to make room for the kick. Observe: This is the screenshot of a synth bass making room for a kick drum, which you can hear here:

If we add soft saturation, we get the following visual response: And the following sonic result:

Despite using the same EQ move, we have a more rounded, pronounced bass sound, with about the same amount of perceivable kick drum.

Analog synths can often sport character, vibe, and complexity not found in their digital counterparts. Squeezed through the pipes of real-world circuitry, the resulting sound gains the richness that only comes from physical amplification. Some digital synths approximate these characteristics quite well; they emulate the desirable circuit path of, say, a Moog to sophisticated degrees. Others, unfortunately, do not.

What is more, producers working out of home or bedroom studios may not know the difference in selecting a patch. They may grab something stock out of the DAW—a timbre perfectly suited to replicating the sound they want to hear, but not matching it exactly.

It falls on you, as the mixing engineer, to add character to these parts—especially if the references offer vibe for days. Here, soft saturation is your friend. It adds a touch of the harmonics, dynamic response, and phase response found in analog gear. You may need to warm it up further with amp modelers, impulse responses, reverberation, or dedicated harmonic exciters. Then again, if you start with a bed of soft saturation, you may not.

I prefer broad tonal shaping for electric guitars, as it sounds more natural than tight sculpts and boosts. Neutron 3, switched into soft saturation, would add harmonics to any broad boost or cut, bringing out overtones which could make the resulting part more musical and resonant.

If Neutron 3 is your primary equalizer, I’d try flipping it into soft saturation for guitaristic tweaks—especially if the part lacks excitement. You may find the tool allows you to do less in fitting a guitar into the track. It becomes a more musical method to handle a complex instrument.

Why so much history and analysis—and why so few tips? Well, sorry to go soft on you, but I wanted to saturate your brain with only the most important takeaways.

I could’ve easily thrown you this fish today. But we’re here to make sure you can feed yourself tomorrow. That’s why the measurements matter—they demonstrate an attempt to understand how soft saturation works.

If you didn’t see the measurements with your eyes, you might not know exactly how the process would interact with your audio. You might have intuited its operation, or hazarded a guess. If you had golden ears, you very well could’ve deduced it. But in seeing it, you know for sure.

In knowing how to test it yourself, you can make your own decisions for tools you’ve never used before. And also, now you have another takeaway, made plain through the history of channel strip EQs: If you want a little British console sound out of your iZotope product, try on soft saturation for size!