How do you define a master with a well-balanced sound? This notion of capturing the “right” tonal balance for your masters might seem like a daunting task—a constant chase of an endlessly moving target.

But there’s hope. Decades of music consumption can prove this otherwise. A well-balanced sound depends on a multitude of factors (recording setup, mixing, production choices, etc.), but studies have shown a consistent trend in tonal characteristics that depend on the musical style or genre.

At the mastering stage, we’re well acquainted with powerful metering tools that allow us to monitor for loudness standards, stereo imaging, and the like. With iZotope’s Tonal Balance Control plug-in, you are now further equipped with a unique analysis tool that serves as a conduit between you and this end-goal of a well-balanced sound—one that’s well suited to its respective genre.

What is Tonal Balance Control and why should I add it to my mastering chain?

Tonal Balance Control allows you to make mastering (or mixing) decisions in the context of a “reference target.” By reference target, we’re referring to EQ target curves. These EQ curves may be genre standards (based on the analysis of thousands of popular songs across various genres/styles), or they may be custom EQ curves based on selected tracks that have been chosen as mastering references specifically for the session.

In the default Broad view, the target curves are displayed as frequency ranges split into four bands (Low, Low-Mid, High-Mid, and High). These bands are meant to express bass instruments, the fundamental range of most tonal instruments, early harmonics, high order harmonics, and other detailed information. The blue bars represent the range of spectral variation that exists within the standards of your target reference. The white line represents your music and how it compares to your target reference over an average period of time.

You can also switch from the default Broad view setting to Fine view for a more nuanced approach to matching your target EQ curve.

You can switch between a Broad or Fine view for a more nuanced approach to matching your target curve.

You’re probably asking yourself, “Why should I use Tonal Balance Control when I have a powerful spectrum analyzer in my toolkit?”

While the spectrum analyzer is one of the most important tools to have in your arsenal and is crucial for identifying resonant and fundamental frequencies in the mix, it doesn’t serve the purpose of providing the context of a target curve that’s relevant to your music. A spectrum analyzer provides you with a rich amount of information in real-time that might make it more challenging to gauge the tonal balance of your music in comparison. Take, for example, the same song displayed on both plug-ins. You get a better grasp of whether your master is well-balanced or not with the Tonal Balance Control on the left versus the Spectrum Analyzer in Insight 2 on the right.

Keep in mind that, in order for Tonal Balance Control to work effectively, it must be inserted at the end of your mastering chain. That way, it’s on the receiving end of every mastering adjustment, thus giving you an accurate representation of your master’s tonal balance in relation to your target curve.

A genre-specific EQ curve to reference against gives you the peace of mind that your mastering decisions align more stylistically with a targeted genre. And with the latest update, Tonal Balance Control’s target curves now cover a broader range of genres and production styles.

From the three original EQ curves (Orchestral, Bass Heavy, and Modern), you are now able to reference across 12 genres and musical styles—from hip hop and EDM all the way to folk and country. For production styles that don’t necessarily fall under one genre, the three original curves remain on the list as powerful, versatile options. Whether you’re mastering your own production or your client’s, the time will come when a track may not accurately belong to any distinct genre. Most often, for these types of mastering sessions, a specific song, an album, or a curated selection of various recordings are provided as the mastering references.

Tonal Balance Control allows you the flexibility to set your own custom target curve based on these mastering references. By selecting the hamburger drop-down menu as shown below, you have the ability to select one audio file as the target reference, or you can create a custom target curve from multiple audio files by selecting a folder from your local drive. Every custom curve can be saved for future use. 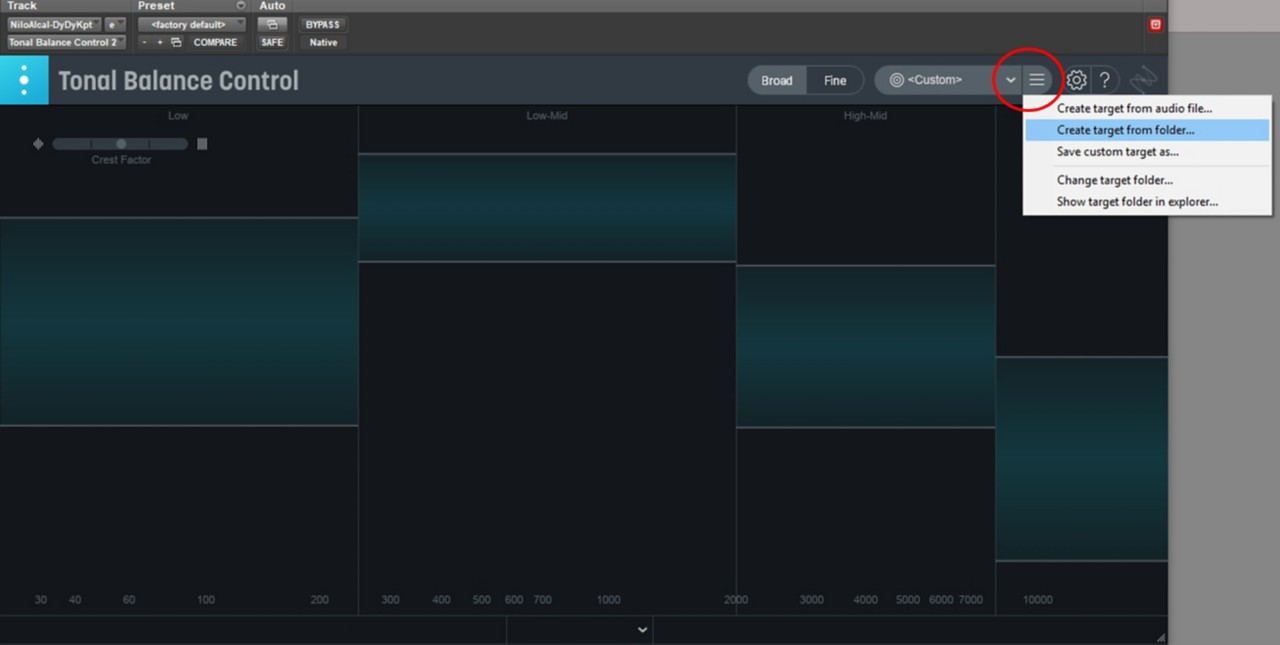 Tonal Balance Control can also generate a custom target curve by analyzing one or more reference tracks of your choosing.

A mastering engineer’s full potential is unleashed in an acoustically-treated, thoughtfully-calibrated studio where their ears can make accurate mastering decisions based on what they hear in front of them. However, even the most highly-skilled engineers may eventually face the challenge of running a mastering session in an acoustic environment they’re unfamiliar with.

When the acoustics you’re dealing with are not entirely reliable, the next logical step is to make sure you have proper metering and analysis tools that ensure the least amount of inaccuracy every step of the way. Setting target mastering curves help maintain perspective in an otherwise unfamiliar acoustic environment.

Because there is greater reliance on Tonal Balance Control during these circumstances, the ability to keep an eye on the tonal balance as you tweak your mastering settings is crucial. With iZotope’s built-in inter-plugin communication, you can fine-tune your mastering EQ and gain settings inside the Tonal Balance Control window. No need to open multiple plug-ins all at once. 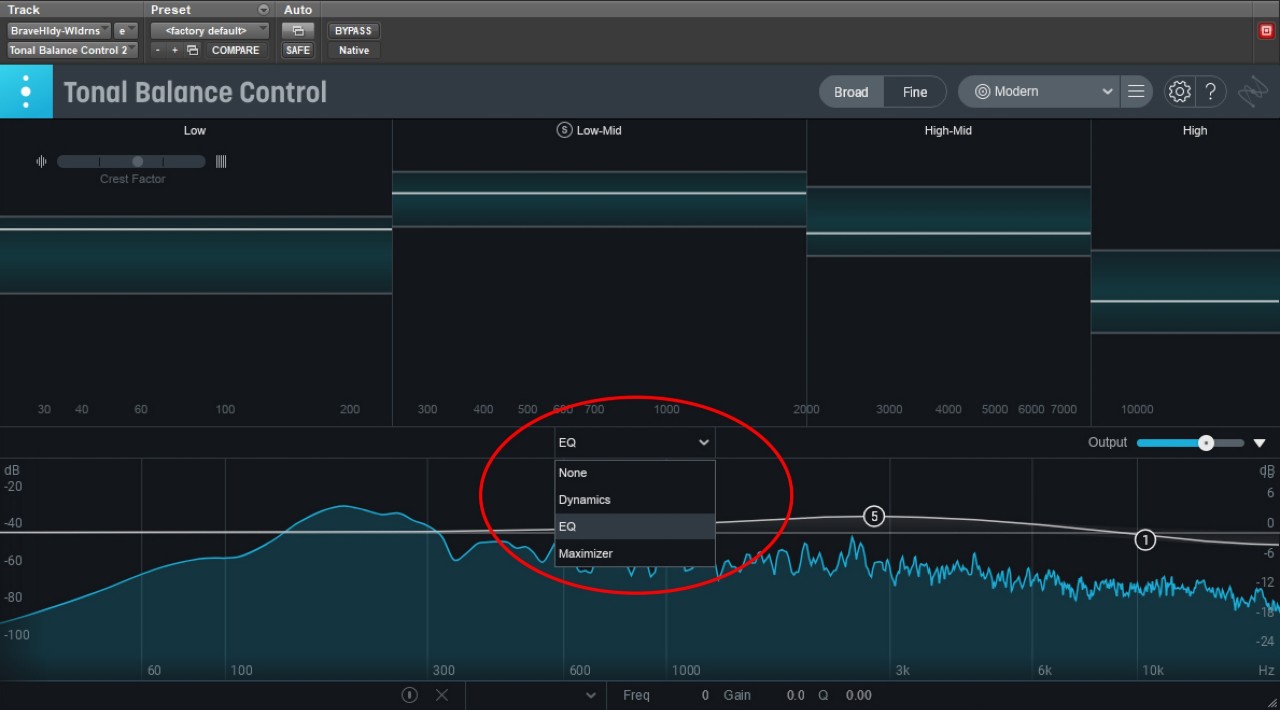 You can speed up and optimize your workflow using Tonal Balance Control’s intuitive inter-plugin communication.

Correcting frequency build-up in the mix

Finally, setting a target curve with Tonal Balance Control allows you greater control over addressing frequency build-up in the mix. By selecting a reference curve, you’re able to tackle the situation within the context of that target and its standard spectral range, making it less of a challenge to identify the problem spot in a mix.

Tonal Balance Control: a tool, not a crutch

As much as it is a powerful tool, Tonal Balance Control is meant to supplement your mastering ears, not replace them. You also have to keep in mind that music is a subjective artform that cannot be fully quantified simply by numbers, graphs, and tools.

Ultimately, it’s essential to practice a discerning ear and critical listening as you lean on mastering tools such as Tonal Balance Control. With its useful visual representation of tonal imbalance in a mix, you also have to analyze whether it is an issue that’s best addressed through mastering, or it could be something that’s better dealt with in the mixing stage. Or it might not even need to be corrected at all! What might be considered an “anomaly” in relation to tonal balance standards could be something that defines the character and uniqueness of a song. Discernment is key.

At the end of the day, your greatest asset will always be your ears, along with your passion to bring out the potential in any music that comes through your doors. No matter how far you go in your musical journey, and no matter how advanced music production tools can become, it always pays to keep listening.