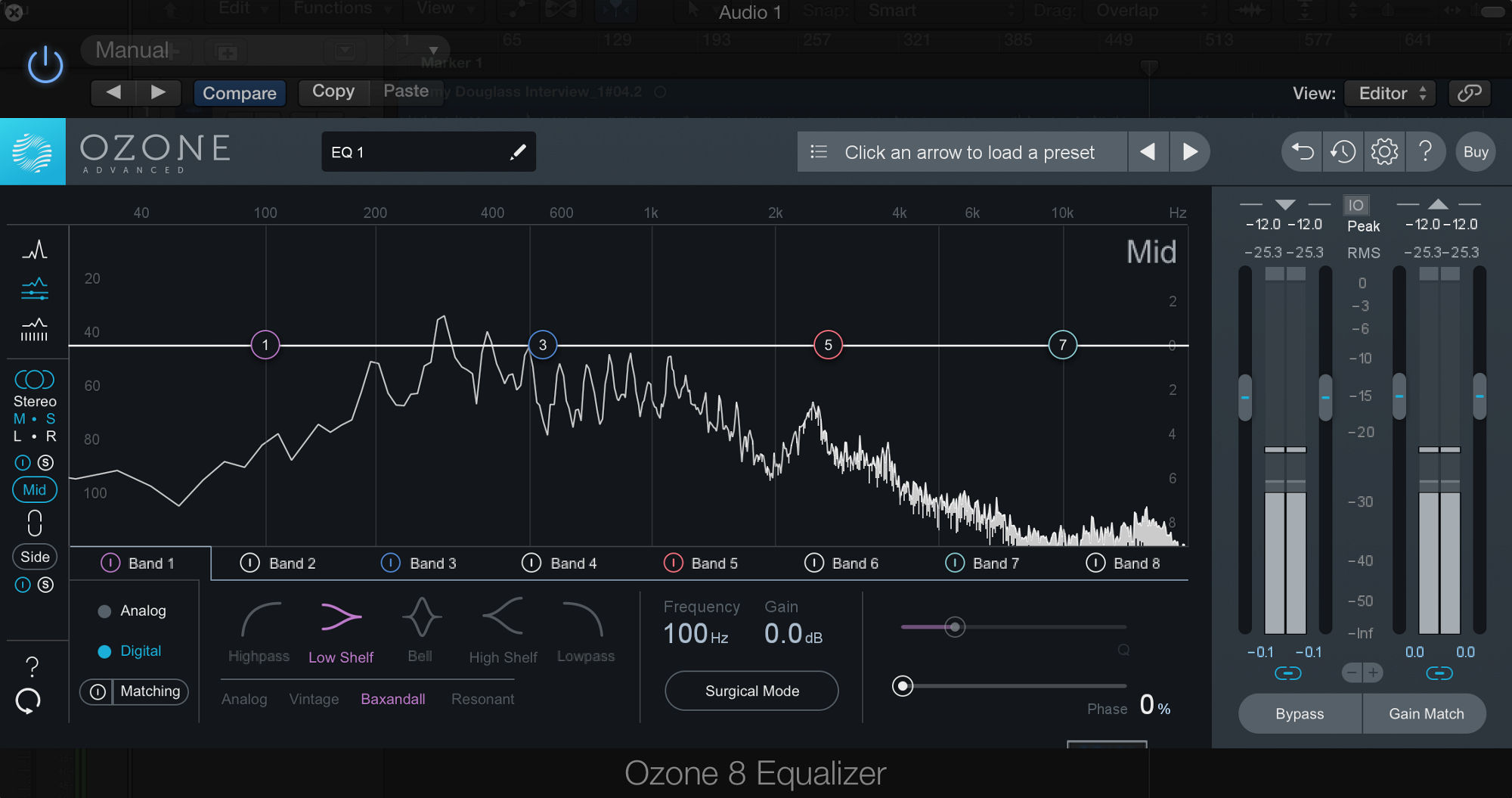 In this three-part blog series about the role of genre in mastering, we're exploring the question, “How much does genre determine what happens in mastering?”

In Part 1 we explored deliverables and level in general. In Part 2, we got a view of whether the aesthetics of each genre can be correlated with the use of processing techniques. And finally in Part 3, we’re exploring what the connection is, if anything, between genre and mastering workflows.

In order to understand the meaning of the question, “How much does genre determine what happens in mastering?” it’s helpful to break that down by asking, are there clearly definable attributes that live inside genre definitions? If the answer is “yes,” then it would seem to follow that a mastering engineer who is mastering a jazz record would have a different “process” in mind compared to someone mastering an electronic record.

You might be tempted to jump to the conclusion, “Of course that’s true,” but I decided to step away from assumptions and ask a panel of experienced mastering engineers to speak to the same set of questions from the perspective of a single genre. It’s interesting to see themes contrast and agreements emerge, sometimes in surprising ways. There’s something to be learned here, about mastering itself and how certain core values stand apart from issues of “style.”

Below you will find the list of engineers who generously gave some of their time to help all of us think about this together, as well as a song that each worked on. Before going further, I think it’s important to understand that most or all mastering engineers are incredibly versatile in their output, musical taste, and sensitivity. In this case I asked each to help us by selecting a single genre for this comparative piece.

I hope you enjoy Part 3. It may answer some questions and it may raise others. Feel free to weigh in on social media.

1. How often do you work from stems?

Luca Pretolesi, Electronic: “We’ve been working with stems a lot lately. In the past couple of years, stem mastering became the best way to approach mastering. I never solo stems, so I still work as if it’s a stereo file with the flexibility to compensate with the stems. For example, if a track is lacking mid range and I bring the mid range more in front of the overall master, but now the vocal is too loud, having the vocal stem to bring it down a couple dB is like having the best of both worlds. During stem mastering though, I always try to stay away from reinventing the mix.”

Darcy Proper, Acoustic/Singer-Songwriter: “I don’t often work from stems and actively try to discourage it unless there is a compelling reason for it. The sum of the stems is often not equal to the actual intended mix, especially if the mix engineer would normally choose to apply tasteful bus compression. (Although generally, the mix engineers who use tasteful bus compression are not those who would choose to deliver stems under normal circumstances. Maybe only for film/multimedia work.)”

Adam Ayan, Pop: “Hardly ever, and stems are definitely not my preference.”

Paul Blakemore, Jazz: “There are a few producers I work with who prefer mastering from stems, either to achieve a particular sonic character (like summing in an analog console as part of mastering) and/or to be able to adjust vocal or solo levels relative to accompaniment after they hear how mastering affects these. By using stems they do not have to reprint a mix with vocal up/down etc. In case this it’s desired.”

Cem Oral, Dance/Electronic: “Many EDM producers are coming from DJing rather than from conservative audio engineering. Stems help to improve that lack of knowledge. Also acoustic issues of bedroom studios are very common, and bass problems are most likely to be expected from such productions.”

Alex Psaroudakis, Electronic: “One song of every 20 is stems.”

Jeff LeRoy, Classical: “For commercial album releases, we almost always master the stereo mix down. The most common exception is TV/licensing projects, where we are mastering each stem for media use.”

Gavin Lurssen, No Genre Selected: “Maybe 10–15% of the time. We have access to stems maybe more like 30% of the time and more if we want it.”

2. How often do you deliver music minus versions (TV/Instr/etc)?

Luca Pretolesi, Electronic: “We have to do that often.”

Darcy Proper, Acoustic/Singer-Songwriter: “In traditional singer-songwriter, the TV track is very often the same as the instrumental. I would say mastered versions of the ‘music minus’ versions are requested about 50% of the time.”

David Glasser, Folk/Bluegrass: “About 10% of projects ask for instrumental and/or TV versions.”

Paul Blakemore, Jazz: “This usually only happens about once a year for me.”

Cem Oral, Dance/Electronic: “More likely from hip-hop artists who also do live shows. Rarely do EDM artists ask for stems as a master for a ‘live’ performances.”

Alex Psaroudakis, Electronic: “For every single.”

Gavin Lurssen, No Genre Selected: “Over 50% of the time.”

3. How often do you deliver versions that involve 5.0 channels or more?

Luca Pretolesi, Electronic: “We never have to deliver files involving 5.0 channels or more.”

Darcy Proper, Acoustic/Singer-Songwriter: “I would estimate that about 30% of my work involves surround in various formats from 5.0 up to 9.1 (so far.)”

Michael Bishop, Classical: “50% of the masters delivered are 5.1 or more channels.”

Adam Ayan, Pop: “Very rarely these days, though used to do a ton of it.”

David Glasser, Folk/Bluegrass: “Very few, though we are equipped for 5.1 mastering in the analog, PCM, and DSD domains. Most surround projects these days are concert films, unlike 15 years ago when we saw quite a few music-only surround projects.”

Paul Blakemore, Jazz: “When I was at Telarc, everything was in both 5.1 and stereo. However, since I have transitioned to working on staff for Concord, I have not done any 5.1 mastering.”

Cem Oral, Dance/Electronic: “God no! I love stereo. Mono is welcome as well :)”

4. Roughly speaking, how much of your work is ITB versus using outboard (analog OR digital)? In your estimation, to what extent does that relate to genre?

Luca Pretolesi, Electronic: “My setup is mostly hybrid, 50-50. Sometimes if I’m fully ITB, I might still use a DA-AD to gain some RMS using analog clipping.”

Darcy Proper, Acoustic/Singer-Songwriter: “I use my analog chain in some form or another on virtually all of my work, but my overall signal path also includes ITB processing as well. That being the case, I would say my work is 50% outboard and 50% ITB, but it would be a very unusual circumstance for me to be working entirely 100% ITB.”

Michael Bishop, Classical: “50/50 ITB versus analog. A PCM project is almost always ITB. DSD projects are mixed in analog with judicious use of high-res PCM DSP on the side when needed.”

Adam Ayan, Pop: “Almost all ITB these days—complete reversal of how I used to work (hybrid signal path).”

Paul Blakemore, Jazz: “About 50%. Some projects are both ITB and outboard analog. I don’t have any outboard digital processing anymore—I have found plug-ins that are more flexible and sound better than hardware digital devices.”

Cem Oral, Dance/Electronic: “90% of the time I use a good combination of analog and digital gear. Some overly compressed mixes are not working with analog gear, though.”

Alex Psaroudakis, Electronic: “Most of my work is hybrid, very rarely ITB.”

Jeff LeRoy, Classical: “For the most part, our mastering is 100% digital.”

Gavin Lurssen, No Genre Selected: “We have an analog console and usually our clients come to us for our tools in this area…we like to compliment some settings with the occasional plug-in if necessary. It is becoming more and more these days and plugins are drastically improving while letting us maintain that organic depth of field sound that people know us for.”

5. In your estimation, to what extent does that relate to genre?

Bob Olhsson, Acoustic/Jazz: “A lot less than five years ago.”

Darcy Proper, Acoustic/Singer-Songwriter: “The choice of tools or the way they are utilized may relate to genre, but regardless of genre, it would be rare at this point for me to work entirely ITB if my full tool set were available. More problematic material or more ‘highly commercial’ material may cause me to use more ITB processing than on a project that is suitable for a more ‘purist’ approach, but I will still probably also be using my analog/outboard tools as well.”

Dan Millice, Rap/Hip-Hop: “Not at all relative to genre.”

David Glasser, Folk/Bluegrass: “Slightly relates to genre. I tend to use digital-only processing for classical and some jazz projects. Most others seem to benefit from analog processing.”

Paul Blakemore, Jazz: “It doesn’t relate to genre for me. It relates to what is best for the music regardless of style.”

Cem Oral, Dance/Electronic: “EDM production love to be run through analog gear. It gives them more ‘focus/center’ and ‘grip.’ Many computer-only-mixes tend to sound distant and indirect.”

Alex Psaroudakis, Electronic: “If I were to do more classical and movies, I would surely stay more ITB. But pop music sounds better hybrid (or so say my clients).”

David V.R. Bowles, Classical: “In my opinion, this relates to the fact that there are better and better digital processing tools (which have handy presets and lots of options for fine-tuning).”

Gavin Lurssen, No Genre Selected: “There is no genre related aspect to this. Simply it needs it or it doesn’t.”