We all know iZotope RX as the popular choice for noise reduction—classical music, field recording, to name a few. But what if we tell you that there is more to RX than being the go-to for audio repair and restoration? RX has earned its place in the mastering engineer's toolbox thanks to its surgical precision. This helps engineers nail the sound they're going for within the strictly limited expanse of the audio mastering world.

Let’s start with the functionalities RX is most known for—noise reduction. Many times, you need to think outside the box when it comes to dealing with more challenging audio sources. And it’s even more challenging in the world of mastering where you’re left to tackle just the stereo file with all its audio sources compounded into one noisier signal.

This was a recent case for award-winning mastering engineer Glenn Schick, an icon especially in the hip hop world thanks to his work on all of Future and 2 Chainz’s albums, just to name a few of his accomplishments. 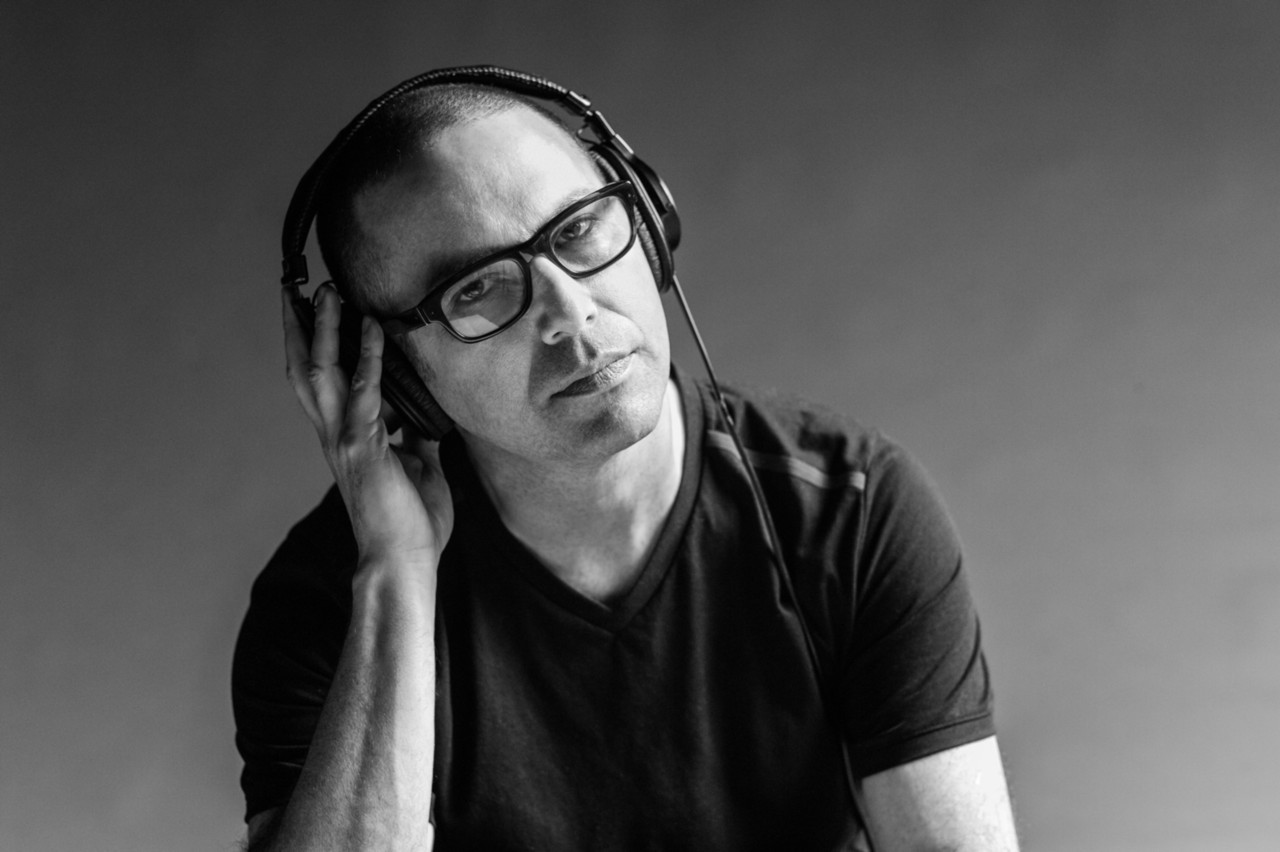 One recent project involved a thorough use of RX in an unconventional context.

What Glenn Schick just described is not an audio forensics session. “It’s actually a music album. It’s hip hop and part of the skit was his sentencing.” The client is Atlanta-based hip hop artist Eldorado Red who’s about to drop a new album featuring the track titled High Max Musik which showcases this audio clip as a verdict & sentencing skit.

Below is a brief clip of the courtroom recording BEFORE the RX treatment:

To tackle the various challenges of this recording, Glenn utilized a thoughtful combination of multiple modules in RX. Starting with the Leveler, he addressed the inconsistent volume which was caused by the mic placements. Next, Glenn used RX’s De-rustle module to control the noise caused by all the mic movements throughout the recording.

The next step was accomplished with the help of RX’s latest feature Repair Assistant which intelligently scans an entire audio clip for suggestions on additional noise reduction. From there, Glenn was able to strategize the last amount of RX treatment—a subtle amount of Voice De-noise and Spectral Repair work. Here is the same clip of the recording AFTER the RX treatment:

As you can hear, the audio now sounds more audible, cleaner, and balanced throughout. This is a unique circumstance where the mastering engineer went through a lot of work on the noise reduction stage. At the end of the day, not all recordings require a heavy hand with the noise treatment. In fact, it doesn’t need to be removed by default simply because it’s “noise”.

“I think every engineer that grabs this stuff (noise reduction tools) knows that too much of anything is a vibe killer. If there comes a point where the processing becomes intrusive, sometimes it’s better to leave the music as is...warts and all. Some of my favorite recordings are lo-fi recordings that I really wouldn’t want anybody to touch. And I’ve heard cleaned-up recordings of some classic albums and it wasn’t all for the better.” —Glenn Schick 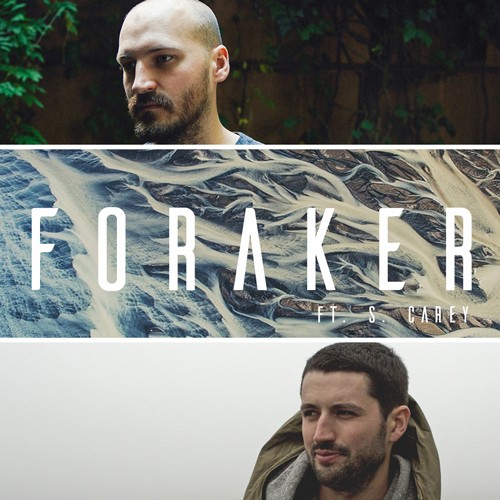 Spectral Repair, for many engineers, is the heart of iZotope RX. The ability to visually isolate any noise and then be able to surgically remove it out of the audio file is an astounding feature. But it isn’t just for removing extraneous noise/clicks in your master.

iZotope’s Education Director Jonathan Wyner can attest to the power of Spectral Repair. “It’s remarkable what you can do when you start to think about audio being represented in that environment. Some of the uses I’ve found include spot EQ. You might find a note in a vocal performance that’s being pulled forward because of how a compressor reacts to the music. With Spectral Repair, you can lasso in that note along with its harmonics to rebalance the performance, for instance. It works really fast and with high fidelity.” 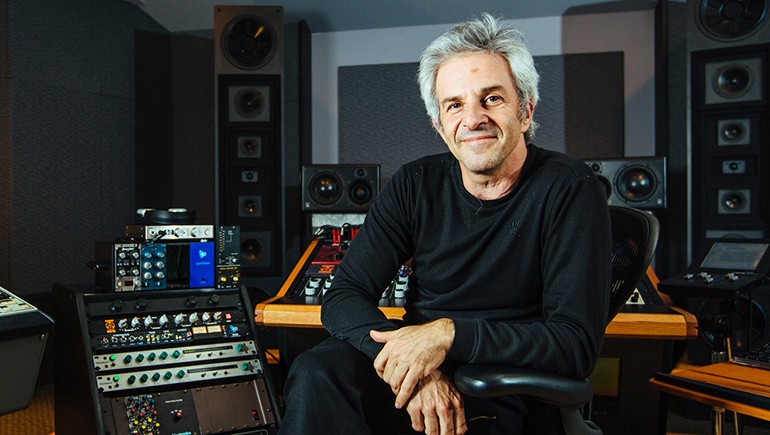 One recent mastering session dealt with a similar scenario. The song Foraker by Cyrus Reynolds is an ambient folk record that showcases a lush production with a sweeping vocal performance by S. Carey. My mastering approach was to highlight these qualities in the final mastered sound. Achieving this, however, resulted in a byproduct which made the high-frequency vocal timbre pop out too much in the climactic section (“ay” from the word “same”).

Below is a clip of that section BEFORE the RX treatment:

The typical method to address this without RX usually involves a narrow band EQ. First, you would do a band sweep to determine the frequency range and then bring down the gain. The downside to this is that you’re only able to target the fundamental frequency. It also runs the risk of affecting other production elements that sit in the same frequency range.

With Spectral Repair, however, you can isolate your desired fundamental note and harmonics without being intrusive to the overall sound. In this example, I used the time-frequency selection tool to target the desired frequency. And then by holding the Shift key, I was able to select multiple areas in the spectrogram, including harmonics. 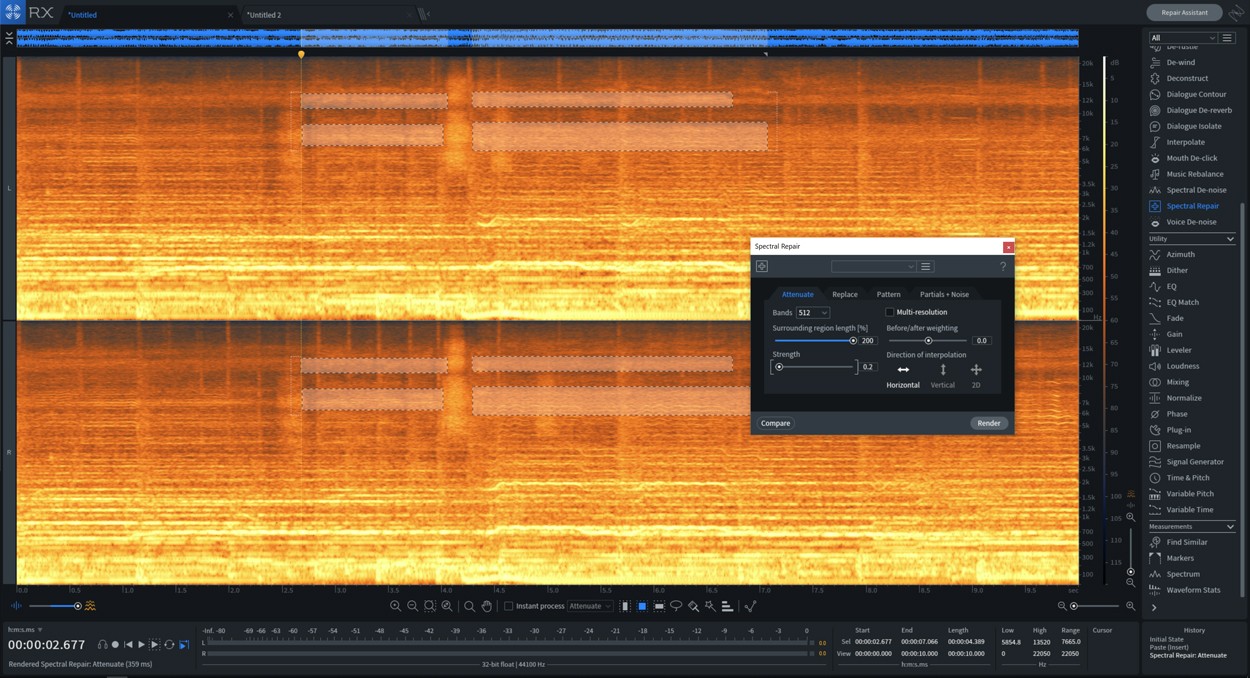 With Attenuate mode at a minimal strength of 0.2, I was able to soften the bright timbre just enough to address what’s needed without disrupting the clarity and vibe of the musical performance.

Here’s the same track AFTER the RX processing:

Song: What I Did For Love (From the album Hajimete no Jazz)

Recorded and mixed by: Nori Shiota 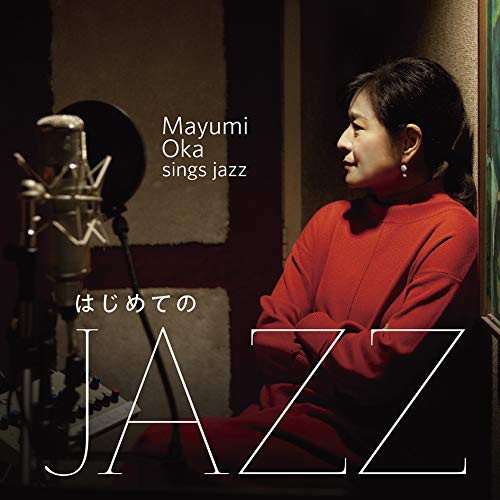 Typically in the mastering world, certain details that weren’t noticed prior to the mastering stage can come out after the fact. In the song What I Did For Love, there was originally a low-end thump in a few parts of the vocal performance that became more noticeable after going through the mastering chain. If you listen closely, it’s most obvious in the words “wish me luck” and “to you”.

Here is a brief audio clip BEFORE applying RX:

Instead of adjusting my overall signal chain to compensate, I used Spectral Repair to zero in on the low-end frequency range and attenuate the thump without interfering with the music’s overall sound and character. To do that, I had to magnify the spectrogram to get a better visual of the lower frequency spectrum, 100 Hz and below. Then using the time-frequency selection tool, I selected the low frequency “thump” in the spectrogram, as seen in the example below. Spectral Repair’s Replace mode was most effective in treating that spot in the audio. 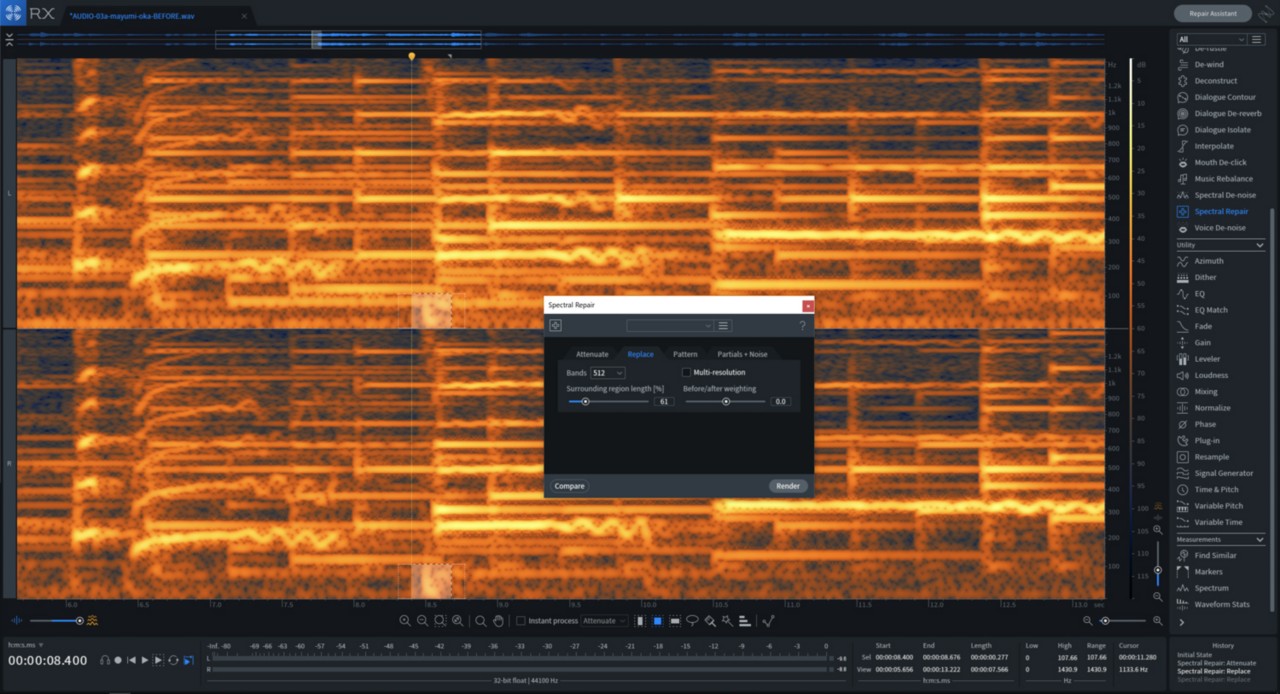 Below you’ll hear the example of the same audio clip AFTER the RX treatment:

Recorded and mixed by: Josh Story 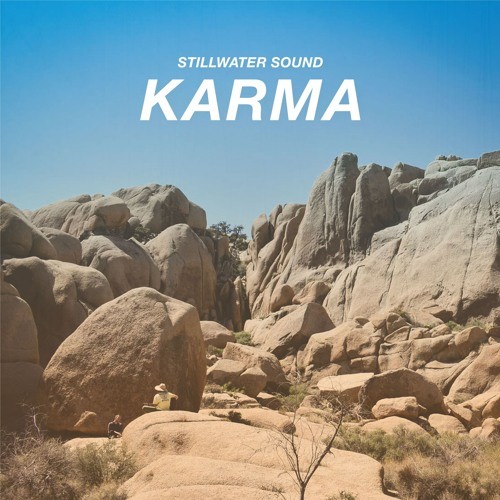 Below you’ll hear the example of the same audio clip AFTER the RX treatment:

Spectral editing within RX also lends itself to a variety of other functions. “...the most obvious would be de-essing. You might have a track that’s about 4 minutes long and you have eight esses that are too strong. It’s so fast to navigate to those clouds of high-frequency energy and just push them back a little bit in the spectrum,” shares iZotope’s Jonathan Wyner.

That’s exactly the case on a mastering session with Stillwater Sound for their recent single Karma. The mastering direction didn’t veer much from the original tone of the mix, but I sculpted the EQ slightly to add air and clarity to the master, along with some articulation in the bottom end. Though we’ve achieved the ideal sound for Karma, the mastering chain did enhance sibilance and consonant plosives in a few sections.

Throwing in a de-esser plug-in on the mastering chain and calling it a day would’ve significantly altered the sound of the master. In contrast, applying Spectral De-esser specifically on those problem spots helped do the trick with little to no effect on the overall sound.

Listen to a brief audio clip of the music BEFORE using RX:

Hearing the clip, the D on “days” and S on “seasons” definitely needed to be tamed. Using Spectral De-esser and RX’s time-frequency selection tool, I zeroed in on this plosive D and sibilant S then adjusted the parameters to taste. 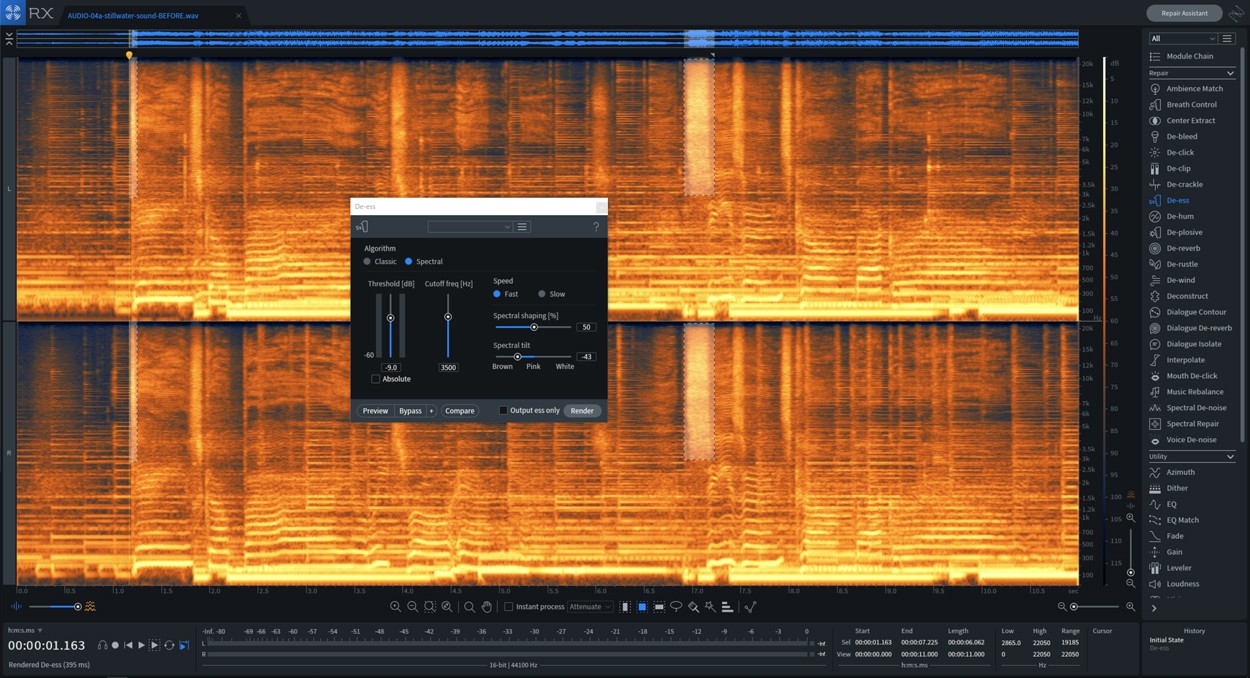 Song: Loving and Losing You 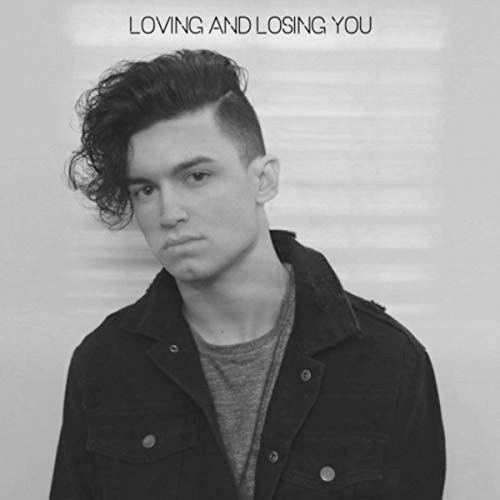 Loving and Losing You by Joe Kirk

It helps to keep an open mind when utilizing all the tools that come with RX. There may come a time when a simple straightforward tool can yield impressive results outside its intended use. Take for example the De-crackle module. It might not seem an obvious choice at first next to De-clip, but it can also be very effective when it comes to fixing amplitude distortion.

In the mastering session for Joe Kirk’s single Loving and Losing You, De-Crackle took on this crucial role. Pop productions are known for their distinctly saturated, compressed sound along with a bright open top-end. The mix delivered on all these characteristics from the get-go. Now, my job as the mastering engineer was to bring out that last 1% potential in the music wherever needed. Subtlety was key.

Given the limited headroom, some distortion might’ve slipped through the cracks after the mastering parameters were nailed so extra vigilance was needed during the mastering session. For this song, I noticed an apparent clipping distortion in the 1-minute mark right when the chorus drops.

Below is a brief audio clip of the section BEFORE RX:

You can hear the distortion specifically on “I” and the “a” on anger. By loading the De-crackle module and adjusting to taste, I was able to take out the distortion without disrupting the sound of the overall master. 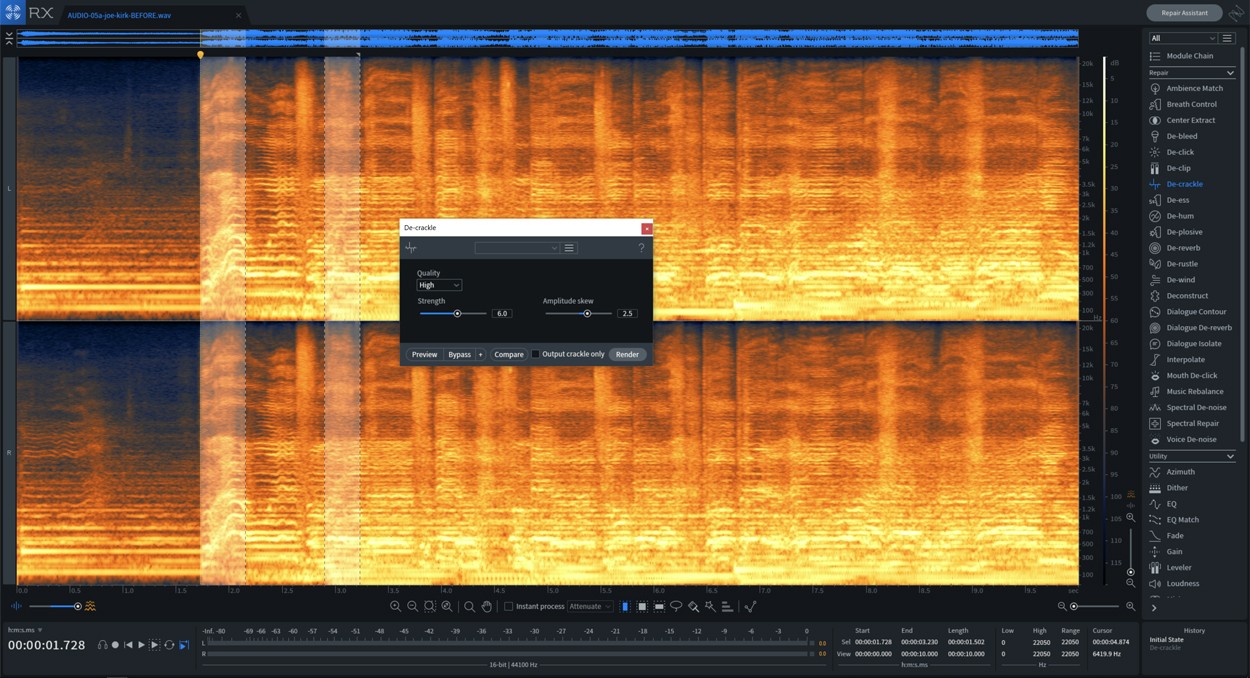 Here’s the same audio clip AFTER the RX treatment:

Noone can deny the versatility of RX even in the limited expanse of a mastering engineer’s world. Above are just 5 of the many possibilities but there’s so much more you can do beyond these examples. It helps to think outside the box and keep the creative juices flowing. How have used RX in a mastering session lately? We’d love to hear about it.