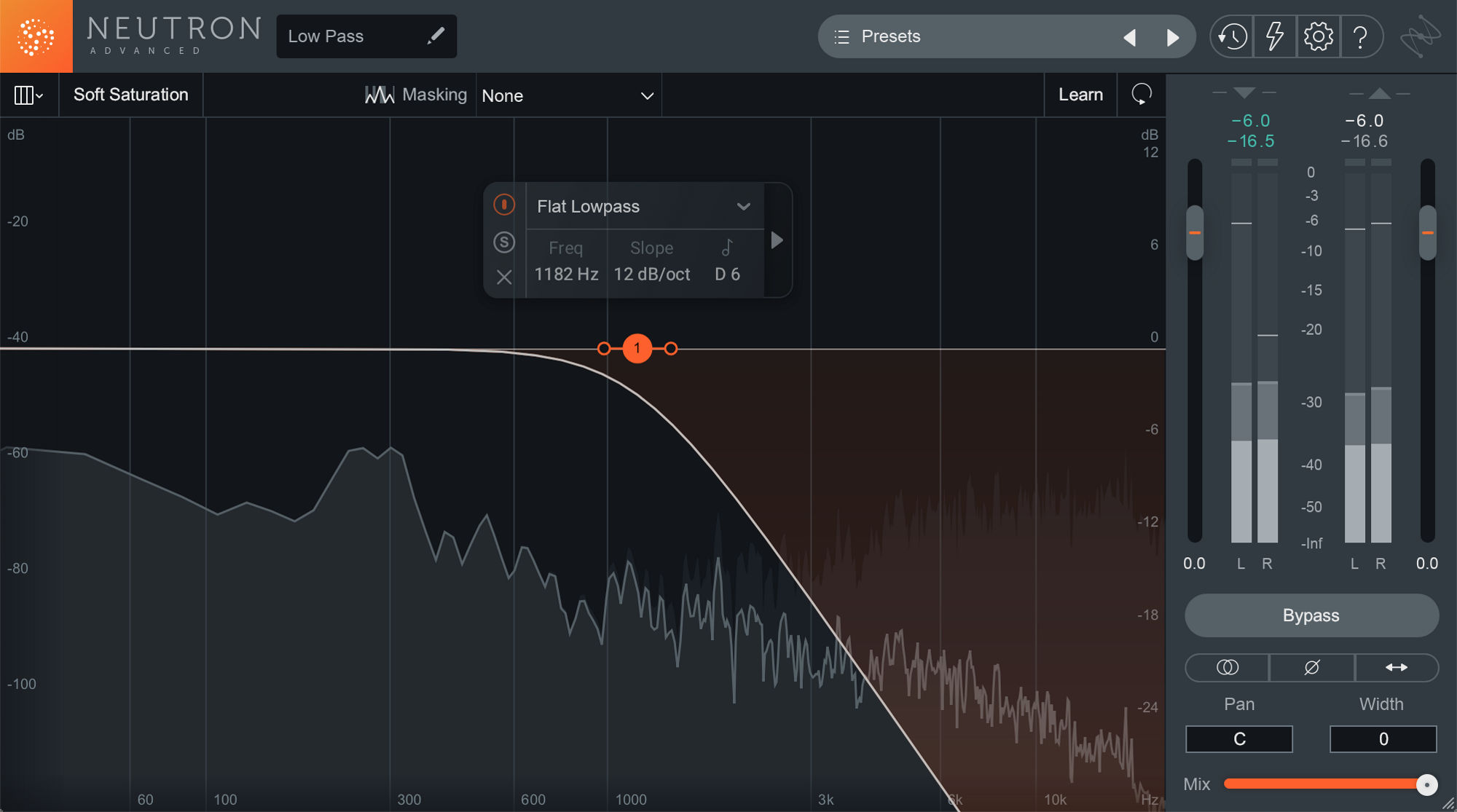 Used with intention, low pass filters can steer wild arrangements toward more polished results and transform one-dimensional sounds into deeper, darker versions. But employed haphazardly, they have the potential to suck the brightness out of a mix and muddy otherwise pleasant audio. Considering this, we put together the following guide: six ways to use a low pass filter when mixing.

Low pass filters give us the option to roll off high-frequency content that is either unnecessary or overwhelming. It’s a fairly basic tool, in that there is only one main control—the filter cutoff point—but its sonic imprint on a mix is huge.

Just as rumble and muddiness can prevent low-end from punching through a mix, sibilance and hiss floating around 10 kHz can take attention away from more important high-frequency information elsewhere.

Take the following screenshot of a bassline in Neutron 3. Although I’m only interested in what’s happening below 2 kHz, a steady layer of fuzz picked up during the recording stage is keeping the spectrum pretty active until much higher. If I bring the bass up in level, or want to push it forward in the mix, the fuzz will tag along with it and mask other instruments in the process. In this scenario, a low pass filter allows us to narrow the focus for the listener. They don’t need to hear the fuzz or even know it was recorded in the first place. Pulling the cutoff point down to where the unwanted part of the signal disappears—without altering the core sound too much—will allow us to achieve this.

For more complex removals of noise, you might be better of running audio through a pass of RX 7. It will intelligently analyze your audio and suggest a setting that gives you the cleanest possible signal. Learn more about RX 7:

2. Create a sense of depth

Mix depth allows us to perceive a sense of physical distance between the front and back of the soundstage.

If we think about the way we perceive sounds in our daily lives, the further away something is from us, the less bright and less loud it is. We might struggle to hear our own thoughts when we walk by city traffic, but find the motors and horns blend into a more controlled tone a block or so away from the action.

This same idea can be brought into the studio. By filtering off the top end and turning down the level of instruments, we push them toward the back of the mix. Generally speaking, vocals, drums, and guitars remain up front, and percussion, pads, and keys sit a little further away.

You can also automate a single instrument to move from far away to close up to by placing a low pass filter on its channel strip and automating the cutoff upward. Get the most from DAW automation with creative approaches, or if you need a refresher, get answers to the automation questions you might be too afraid to ask.

By design, filtering is best used to make space for sounds. In the case of a low pass filter, this means selectively removing high frequencies so upper range instruments can be heard.

A project with multiple sweeping synths and vocal layers will sound cluttered, as all of these elements are competing for the same frequencies. A new engineer might try to combat this by turning up the top-end of the vocal tracks so they stand out, aggravating the issue further and creating an overly bright mix.

On the other hand, if you get rid of top end on a sound that doesn’t really need it, you will get a far more polished result that actually enhances the overall energy. If what you like about a synth track is going on in the mid-range, turn down those highs so the vocals come through more easily. Crispy snares can also conflict with vocals and might serve the overall groove better when slightly muted.

A great way to train yourself to hear these imbalances is with Tonal Balance Control, which maps the frequency content of your mix against a reference target of your choice—either a single song, collection of songs, or genre. Learn how reference tracks impact a mix, decade by decade.

Take a look at the screenshot below for reference—the blue bounds provide a rough guideline for where your music should fall at various points in the spectrum, and the white lines reflect how your music compares.

Top Tip: If your mids and highs consistently remain around or above the upper bounds, the brighter elements in your mix might need to be rolled off. If they land near or below the lower bounds, you may want to open those filters up.

The more vocal tracks you add, the more frequencies overlap and the harder it is to hear everything. Perhaps one of the greatest clashes you will encounter in a mix happens between the leads and backgrounds.

To carve out a space for the lead, low pass the background vocals so they act more like a shadow than a competitor. Additional cuts along the spectrum are typically required to enhance the split.

If you struggle to balance leads and backgrounds, try reducing the number of vocal tracks you have in your DAW. Too many stacks will cramp your mix and end up costing you precious headroom and dynamics.

Read more about vocal production and how to produce background vocals that complement a lead.

While typically low pass filters are used to remove frequencies, you can also use them to add more of what you like to a signal.

Maybe your sound has interesting upper harmonics, but they’re too quiet. Place a low pass filter cutoff around the point they are losing energy, and slightly boost to emphasize them, as shown in the screenshot below with node 8. You don’t want to push this too far, which creates boxy feel in the mids and a harshness in the highs.

Top tip: To prevent this, use a wider boost instead of a narrow one—the former is more natural in feel and less likely to introduce artifacts.

Boosting around the cutoff in Neutron 3

Try the same thing on the opposite end of the spectrum with a high-pass filter. You can neatly tame the wilder instruments in your mix, while enhancing the qualities you like most about them in a very musical way.

Like all mixing tools, you can overdo it with low pass filters, especially as a beginner. But how do you know when you’ve gone too far?

As an experiment, place a low-pass filter on the output channel of a session, then pull the cutoff down towards its lowest point. You’ll notice the vibrancy of the mix leaving (especially once you surpass 15 kHz), until all you’re left with is a murky low-end soup. Move the cutoff back up again and listen to the brightness return. This should show you just how much energy can be lost when you low-pass recklessly.

Though it's unlikely anyone would apply this kind of drastic filtering to an entire mix, our ear’s sensitivity to mid and high range frequencies may lead us to roll off more than we need to on rich, harmonic instruments. Our natural sensitivity weakens even further once we spend many hours in the studio and ear fatigue sets in.

Long hours in the studio also mean repeated listens to a mix. If there is too much low pass filtering to start with, we may become accustomed to the muted sound and find the addition of high end too harsh in comparison. You can prevent both of these scenarios by taking breaks. It’s surprising just how much more you notice in a mix after taking 10 minutes away from it.

To stress the importance of restraint in filtering, listen to the following example, where I have a synth bass running alongside a drum loop. In the first part of the clip, the cutoff frequency is set too high and the bass is overly bright, which distracts from its rhythmic function. The low pass is more clearly working in the second part of the clip; the bass sound bass-y and feels round, but it's also lost the bite from the original signal. By letting a little bit of brightness back in, the bass get it’s attitude back without overstepping its role—which you can hear in part three.

With just a single parameter, low pass filters give us a great deal of creative and corrective control over our mixes. For this reason, they are used across all styles of music to improve balance and clarity.

I’ve already issued a lengthy warning of the dangers of over-filtering, so I won’t go on much further except to reiterate that low-passing can create just as many problems as it solves when used without restraint. With a bit of patience, ear training, and the visual feedback of Tonal Balance Control, you should have more than enough to make the best decisions for your mix.