This article will familiarize you with some of the most common and essential audio effects to take your vocal production to the next level. If you are new to home recording, follow these steps to drastically improve the sound of your recorded voice.

In this article you'll learn:

Want to add these audio effects to your vocals as you follow along? Get your copy of iZotope Music Production Suite.

Pitch correction/tuning is used in most professional audio recordings to change or improve the intonation of a voice. It can also be used to artificially create harmonies. The amount of pitch correction used on a recording can be a matter of taste, but it’s important for every vocalist to understand the basic functions of pitch correction.

Now, here is the same vocal with the pitch adjusted to improve intonation:

Here is the same voice re-tuned at different pitches to create a harmony: The large blobs represent overall pitch, and the lines represent the vibrato or pitch modulation

Vibrato/Pitch Modulation is another parameter used in pitch correction which adjusts the natural pitch variation created as a result of vibrato. A natural voice may alternate pitch slightly above and below the note center during the performance, and adjusting this parameter either increases or decreases the intensity.

If you’re looking for a robotic tuning effect, try removing the vibrato completely. For a more natural turning effect, keep the natural vibrato or increase it.

Here is an example of vibrato removed completely from a vocal recording:

No Vibrato Tuning on Vocals

Here is an example of vibrato being exaggerated and increased on a vocal recording: 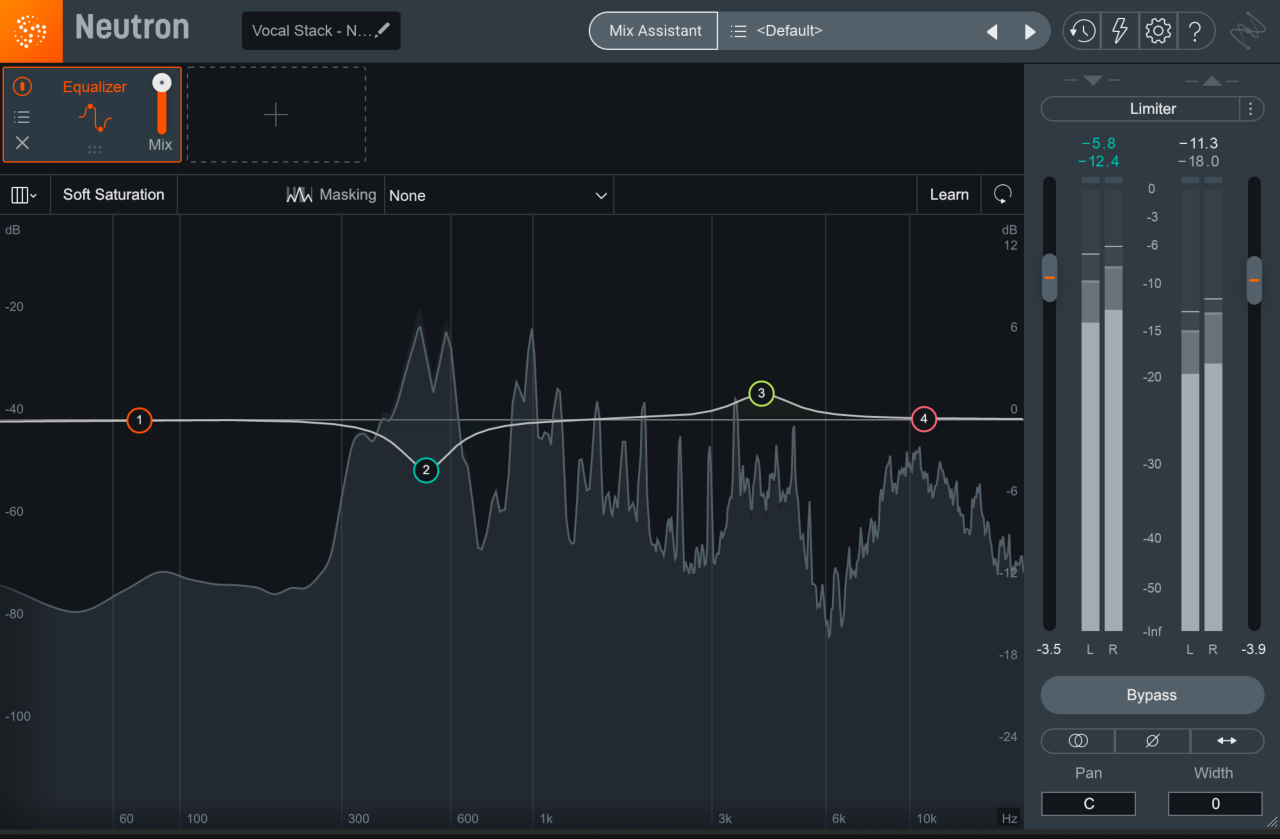 EQ or equalization is an effect that adjusts the frequency content of a recording. It can be used to remove unwanted or unpleasant frequencies and also be used to sculpt a unique timbre for the voice. Parametric EQs are the most common, and they are set up with low frequencies on the left, and high frequencies on the right (measured in hertz/Hz). The range of frequencies is usually the range of what we as human beings can hear: 20 Hz – 20 kHz.

A High Pass Filter is one of the most useful EQ effects to help make your vocal recording sound more professional. A high pass filter “lets highs pass through” or cuts low frequencies. It is most commonly used to remove low frequency problems that come from plosives (recording without a pop filter, creating boomy Ps & Bs) and proximity effect (being too close to the mic while recording). 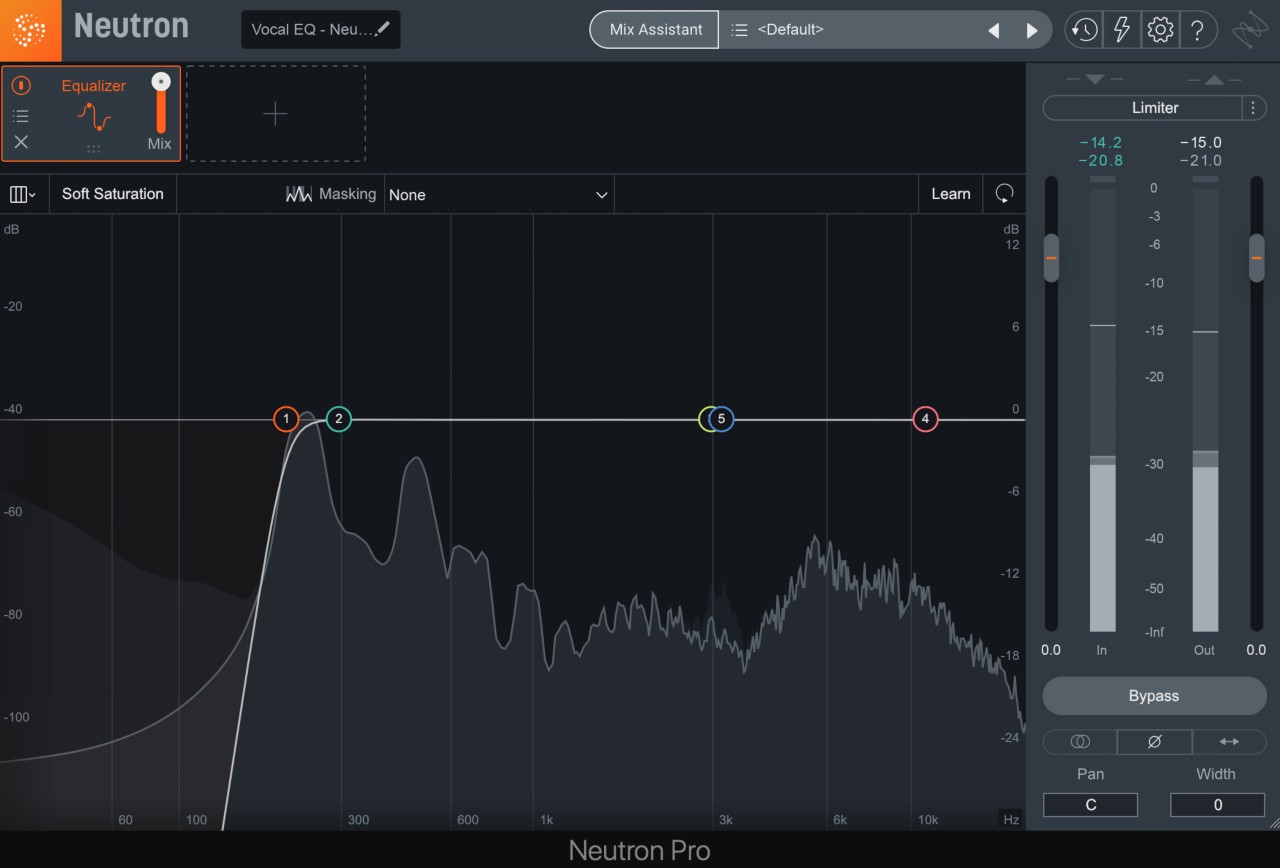 Here's an example of an extreme case of using a high pass filter to demonstrate the overall shape and sound of a high pass filter. Listen to this voice recorded without a pop filter with extreme plosives in the low frequencies:

Vocals with No EQ

Now listen to the same voice with a HPF at 210 Hz.

Vocals with a High Pass Filter

“Peak & Sweep” is a technique used to find problematic frequencies when you don’t know precisely what frequency is creating the issue. Parametric EQs have 3 parameters: frequency, gain and Q. The Q value is the bandwidth, or wideness of the range of frequencies being processed. Band 3 has a wide Q, while Band 5 has a narrow Q in Ozone

Here is an example of a voice with a bothersome frequency around 3kHz, identified by peak & sweep:

Here is the same voice with the problematic frequency cut/removed.

De-essing is a process that reduces the harshness of s’s, or sibilance, in a vocal recording. It is a frequency-dependent compressor, meaning it detects and reduces the volume of a specific frequency or range of frequencies.

Sibilance can be exaggerated when recording with a condenser microphone and can be irritating for listeners, especially on headphones. To get the most out of your de-esser, use it before your compressor. 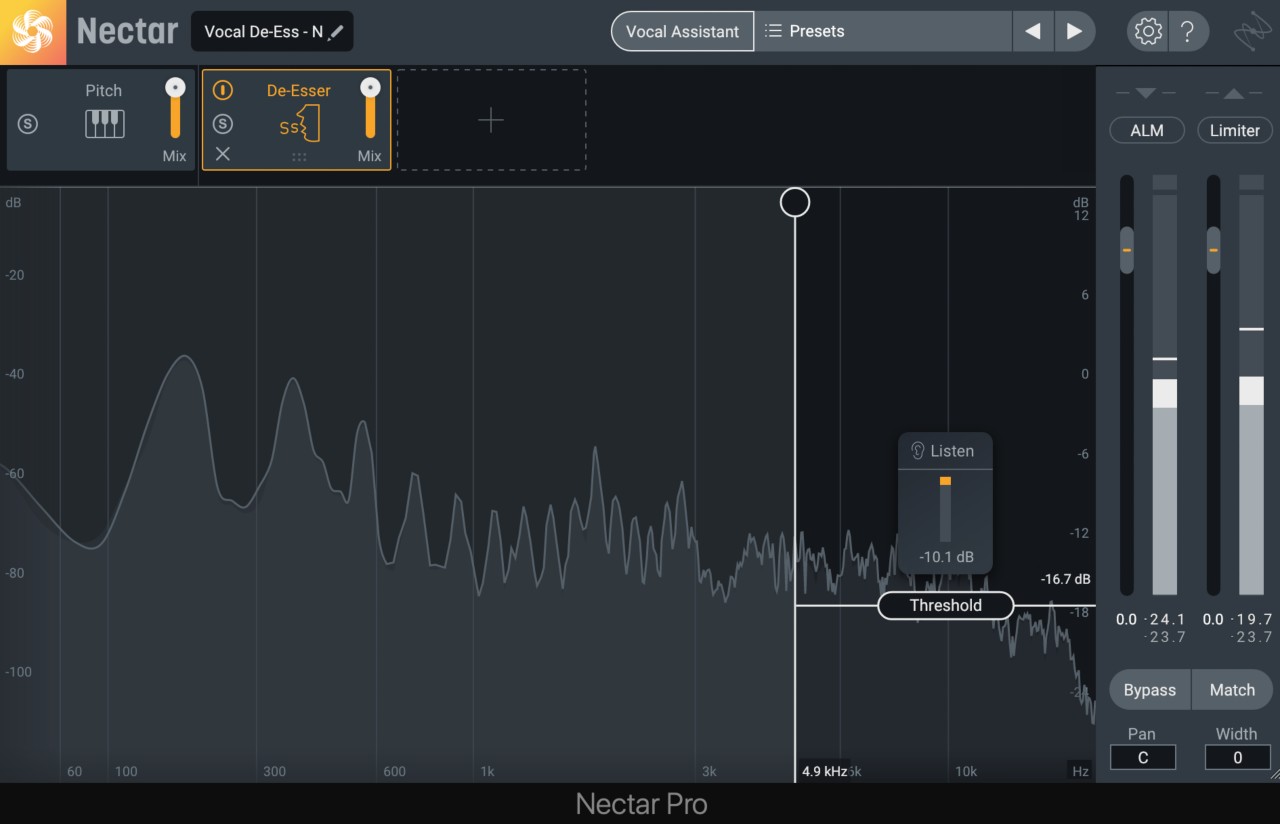 The threshold is at what level (in decibels) the sibilance has to reach in order to be reduced. The lower the threshold, the more drastically the sibilant frequency will be lowered.

This setting allows you to precisely isolate the frequency range of the sibilance in your recording in order to detect and reduce it.

Here is an example of a vocal without a de-esser and harsh sibilance:

Vocals with No De-essing

Now, here is the same vocal with de-essing added to remove the intensity of the sibilance.

Compression is a process that unifies the dynamic range of a recording. In other words, it reduces the range between loud and soft dynamics in the vocal, making it more consistent in volume throughout the song. 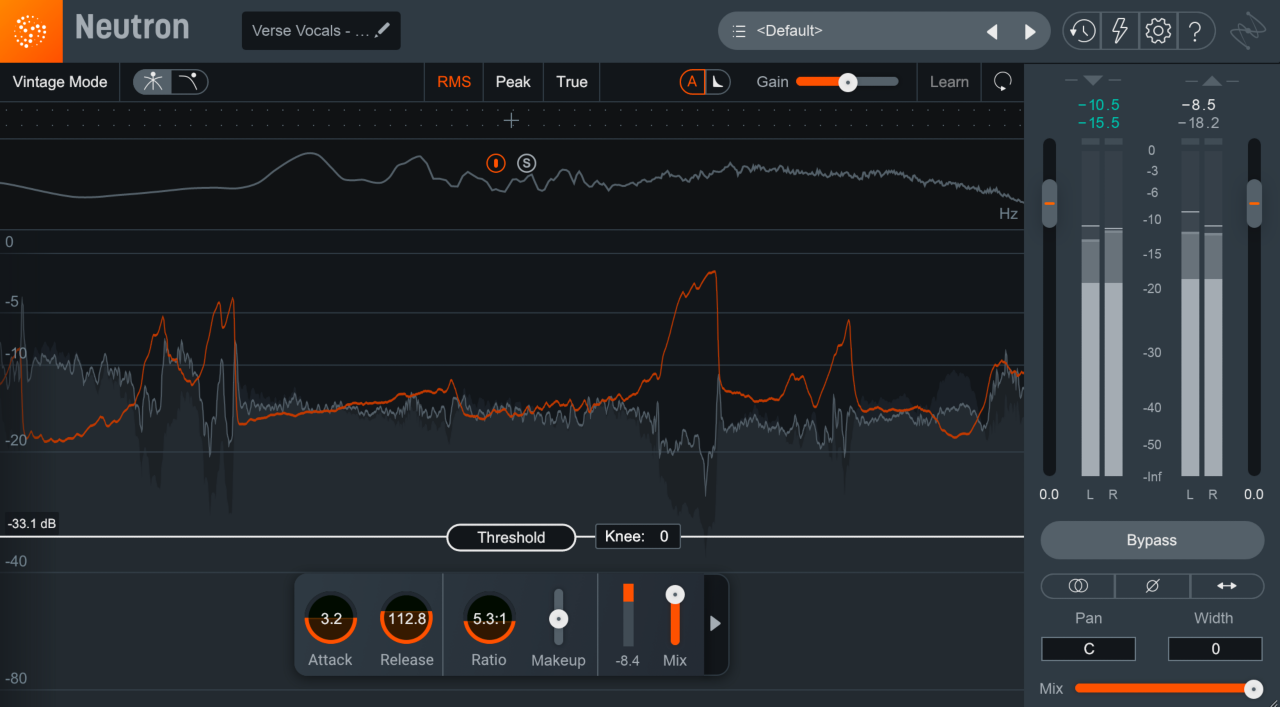 The ratio is how much a signal gets compressed after going over the threshold. Ratios are usually set up as mathematical ratios, like 5:1 and 3:1. The higher the first number, the more compression is added.

When a signal is compressed, it loses volume by reducing the level of every peak going over the threshold. This process is called gain reduction.

Compressor settings in Neutron, including gain reduction measured at -4.3dB

Here is an example of an uncompressed, dynamic vocal:

Now, here is the same vocal with the threshold set near the quietest word in the phrase, a 5:1 ratio, and makeup gain added back after the compression process.

Reverb is one of the most commonly used vocal effects heard in recorded music. Reverb is the sound of a space, and we experience reverb in our lives every day. To hear the sound of the space you’re in right now, clap a few times to hear how your room responds. Every space has its own ambience, or natural reverb sound.

We can add reverb to our vocals in the DAW to give them a new or different space. Reverb can enhance the timbre and performance of a vocal with a sparkly plate, or make a vocal recorded in a bedroom sound like it was recorded in a large arena. 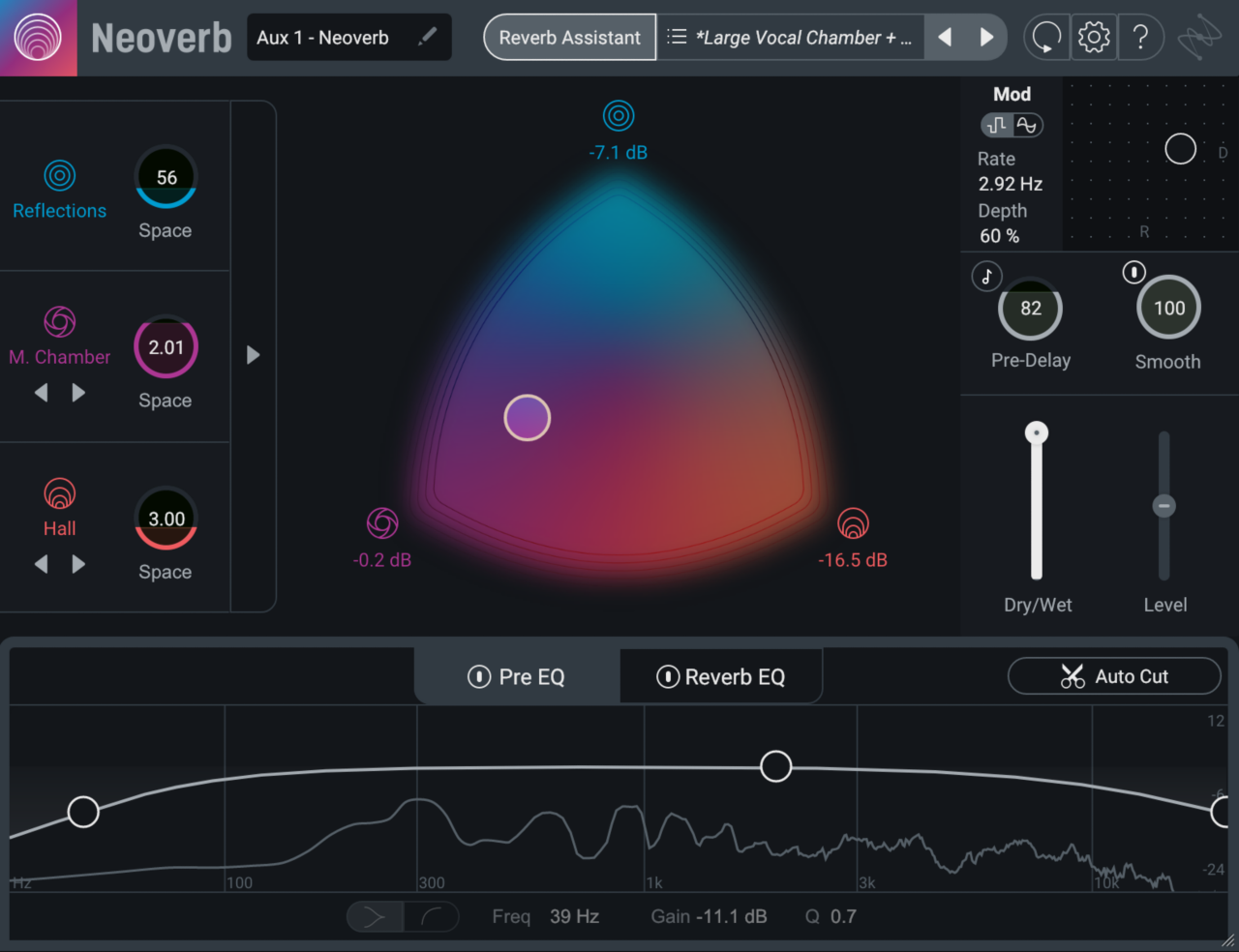 Reverb time (sometimes referred to as decay or decay time) is the amount of time the reverb effect lasts before trailing off. The longer the reverb time, the more dramatic the reverb and larger the space sounds.

The mix value is how much wet (reverberated) signal is heard. If you are using reverb on a bus, this should always be set to 100%.

Pre-delay is the amount of time (in milliseconds) it takes before the reverb effect actually kicks in. This is an excellent tool to use on vocal reverbs to give time for all of the lyrics and consonants to come through without being overwhelmed by the reverb.

Here is an example of a dry vocal recording with no digital reverb:

Now, here is the same vocal using Neoverb’s “Large Vocal Chamber” with a few adjustments including 82 ms of pre-delay.

Get started with using audio effects on vocals

Now that you know about these different audio effects, it's time to put them to use in music production and mixing. Get your copy of Music Production Suite and use iZotope's Assistive Audio Technology in Nectar to get to a great starting point on your vocal mix. Nectar's Vocal Assistant analyzes the content of your performance and generates an effects preset form-fitted to the nuances of your singer and your music, including many of these audio effects discussed in this article.

Beyond that, play around with the various modules and assistants in Nectar, Neutron, and Neoverb to learn each one, and practice to find the best settings for your voice and your music!