Some claim it’s the golden ticket to a big, wide stereo image, others say it’s a surefire way to end up in a mess of comb filtering and phase issues. That’s right, we’re talking about the Hass effect. If you’ve ever tried to figure out how to widen a mono sound, you’ve probably heard of the Haas effect, or Haas delay, but what exactly is it? In this article, we’ll look at its history, what exactly it is, how you can use it in your mixes, and why you might not want to.

So don’t delay*, act now and find out what this Haas business is all about!

*I’m reaching with this one, I know. It’ll make more sense by the end. In the meantime, blame my Dad for the bad puns.

Follow along with this tutorial using Ozone, the industry's most advanced mastering suite.

What is the Haas effect?

The Haas effect occurs when a listener experiences two sounds—often copies of one another—that are separated by a sufficiently short time as a single sound event. Moreover, even if they come from different directions, the perceived direction of origin will be dictated almost entirely by the sound that arrives first. The Haas effect is also known as the precedence effect.

So why the “Haas effect?” Well, in December 1949, one Helmut Haas described this effect in his Ph.D. thesis, and for whatever reason, the audio world seems to have gotten stuck on that. However, Haas was not the first to describe this phenomenon. Some six months before his thesis was published, Hans Wallach and his colleagues published very similar findings in The American Journal of Psychology under the title, “The Precedence Effect in Sound Localization.”

In fact, even Wallach et. al were nearly 100 years late to the game, for it was in 1851 that Joseph Henry wrote “On the Limit of Perceptibility of A Direct and Reflected Sound.” 1851! Not only that, but his margins of accuracy were surprisingly close to the findings of Wallach, Haas, and their contemporaries nearly a century later. All this to say, more than a few people have been interested in this effect over the years. 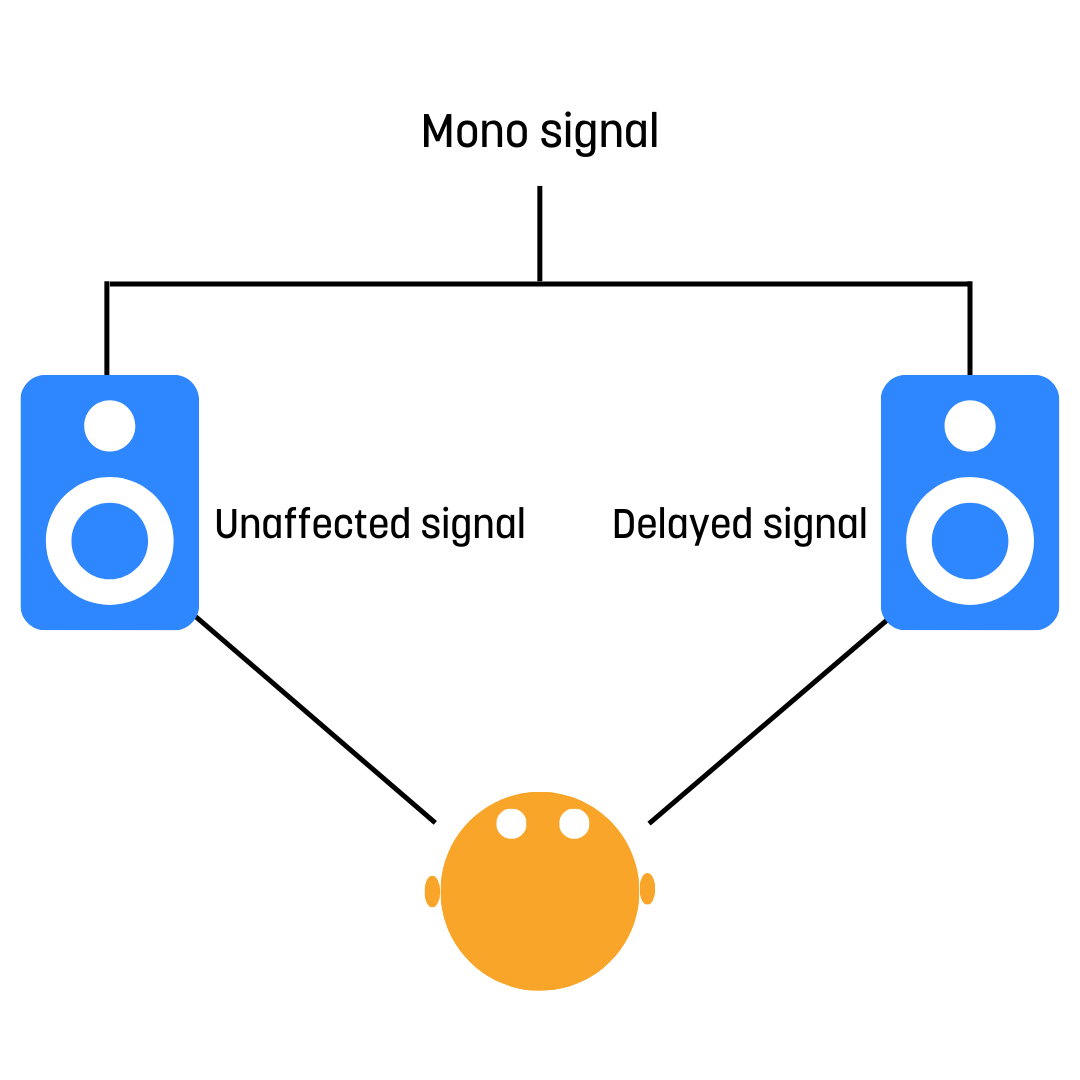 Basic diagram of the Haas effect

The Haas effect in detail

OK, enough with the history lesson, let’s unpack the Haas effect in a little more detail. What qualifies a sound as being a “copy” in this context? What is a “sufficiently short time?” How does direction play into it, and to what degree?

First, let’s talk about “copies.” Haas and his peers were mostly interested in this phenomenon as it relates to architectural acoustics. Specifically, how is it that in a room where a soundwave is reflecting and bouncing all over the place, we can still tell with great precision where the original sound source is located? Furthermore, why is it that some of these reflections are heard as a diffuse, reverberant field, while others are heard as distinct and separate echoes? 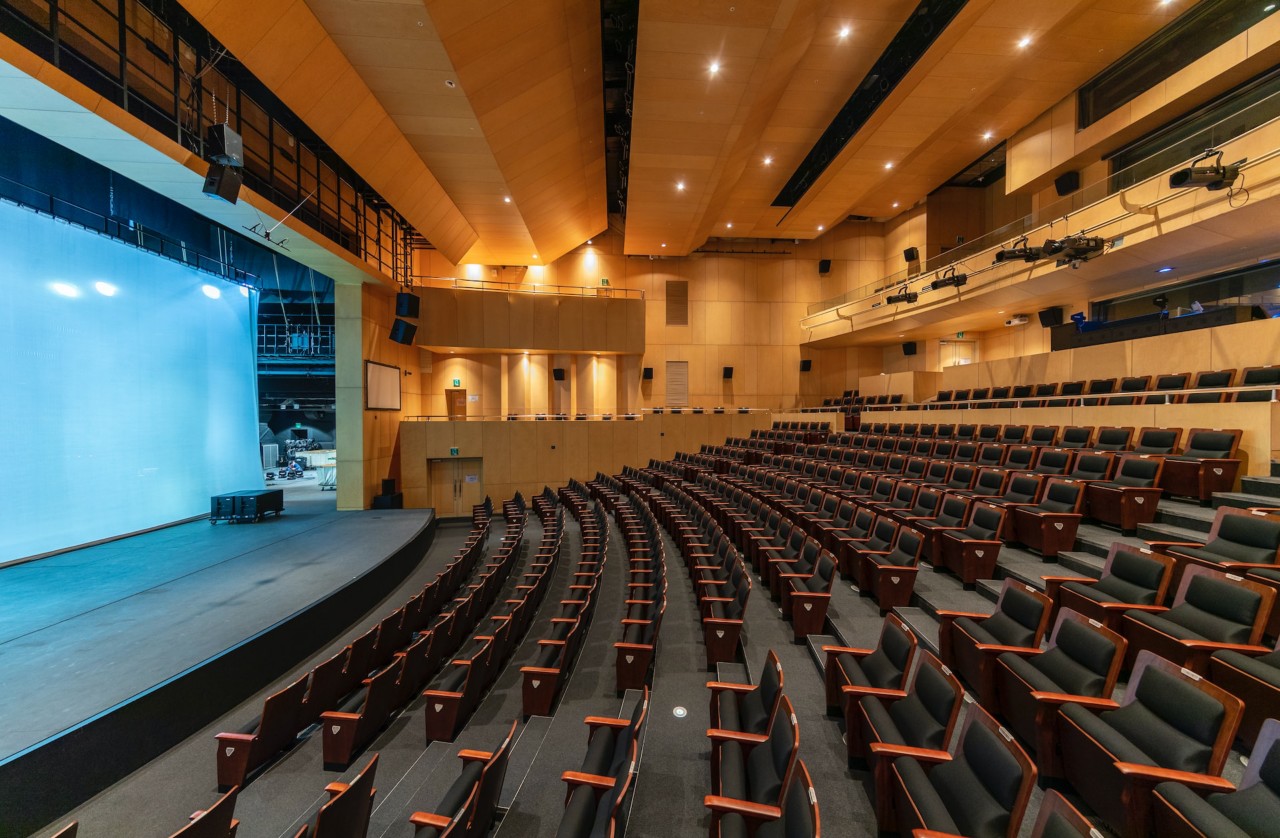 We’ll get to that, but for now, this gives us some insight that “copies” basically means acoustical reflections off walls and other types of surfaces. To visualize this, imagine you’re listening to a presenter giving a speech on a stage out in an open field, except there’s a wall behind you. As the presenter speaks, their voice first passes you and enters your ears. It then continues on, hits the wall, bounces back, and a very short time later that reflection—or copy—also enters your ears.

That’s useful because this is something we could potentially emulate with a simple delay. Now, not a delay with feedback and modulation and other cool, effect elements, just a simple time delay. Sound goes in, some specified amount of time later the same sound comes out. And while the acoustic properties of the wall might change the tonal balance—or EQ—of the reflected sound a little, it’s not going to radically distort it or add qualities that weren’t there in the first place. So OK, maybe a delay and a little EQ could replicate what we’re talking about.

So then, what’s “a sufficiently short time?” As Haas and his peers discovered, this is a bit more complicated. Generally speaking, a delay time is considered to be in the Haas zone if it is less than about 30–40 ms. (Side note: remember Joseph Henry from 1851? He estimated this at 50 ms. Not too shabby, eh?) This can extend up to 50, or even 100 ms for certain sounds, however it is dependent on a number of factors.

First, what is the nature of the sound? Is it short and percussive, or sustained and even? Second, who is the individual doing the hearing? Third, what is the nature of the reflection? Is it louder? Softer? Has its EQ been changed substantially? Is it embedded in an underlying reverberant field? So long as the delay is less than about 40 ms, all of these factors work together to determine whether a reflected—or delayed—sound is heard as being part of, or distinct from, the original sound.

Taken together, this gives us some interesting information. If we wanted to simulate a Haas delay, we would need a simple delay, perhaps an EQ, and to tune the delay time to somewhere between 1 and 40 ms depending on the sound source.

Ok, so what about the direction bit? This is where it gets really interesting, at least from a production and mixing perspective. One of the findings of Haas and his peers was that not only can a sound and its copy be perceived as a singular, fused sound, but that this effect persists even if the sound and its reflection come from substantially different directions.

For very short delays of about 2–5 ms the location is judged almost exclusively from the initial sound, and as the delay increases past about 5 ms the perceived level and spaciousness of the sound increases while still retaining the apparent location of the initial sound. Interestingly, the level of the reflected sound can even be louder than the direct sound—on the order of 10 dB—and still not interfere with localization.

Let's take a listen to the Haas effect in action. Here's an audio example with no Haas delay.

The audio example with no Haas delay is clearly from a singular sound source. As we increase the Haas delay on the guitar, it begins to sound louder and wider. This can be used in audio mixing to widen the stereo image of a mix—when exercised with caution!

How to use the Haas effect

Increasing perceived level and spaciousness? Who doesn’t want that?! In principle, this is pretty easy to put to use in your music. Before I tell you how to though, I want to warn you that the simple method can have some nasty unintended consequences, so don’t just read the next few bullet points and immediately run off to use it in your next song.

The simple version is this:

In a nutshell, that’s it! 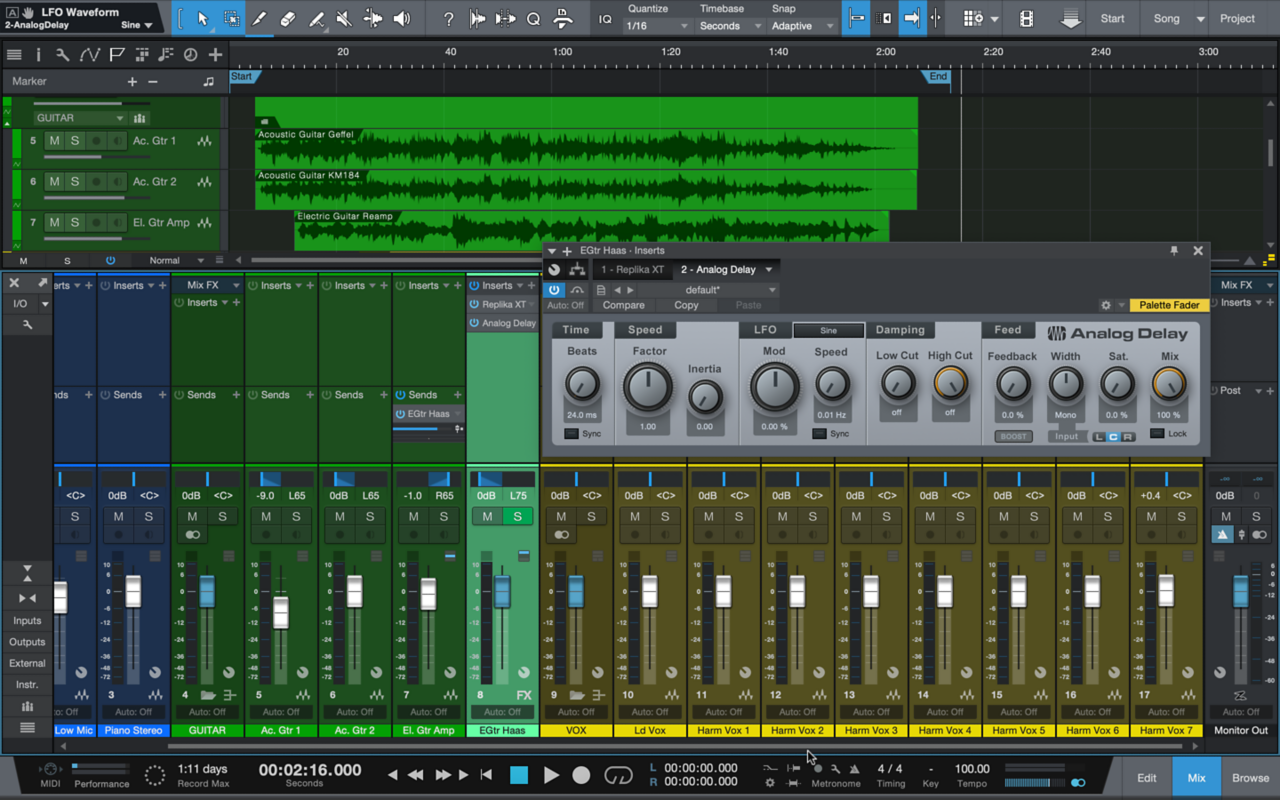 Setting up the Haas effect in Studio One

The problem with Haas

As I mentioned, there are some problems with using this simple version of the Haas effect though. Probably the biggest one is that it can result in some really nasty comb filtering—a type of frequency dependent phase cancellation—when summed to mono, or even if played from a stereo system where the speakers are physically close to each other. So what, should we just not use it? This seems like a pretty powerful thing to just toss in the bin.

Well, no, we needn’t be that draconian. First of all, there are ways that you can modify the Haas effect that will minimize the comb filtering. Fine-tuning the panning, delay time, level, and EQ of the delayed signal can all help you achieve a nice, wide soundstage without negatively impacting the mono version. But there are also other techniques you can use that are at least equally as effective without any of the drawbacks.

For example, you could use mid/side processing and apply the Haas delay to the side channel. This way, rather than creating comb filtering, the delayed signal simply cancells itself in mono. There are even techniques with fancy sounding names like “Velvet-Noise decorrelation” that can yield an even more natural sounding result. Lucky for you, these are both implemented in the 100% free, Ozone Imager, which makes it easier than ever to get this effect without any additional routing, mid/side matrixing, or other shenanigans. Simply turn on the “Stereoize” function, push up the width slider, and tune the time parameter to taste. 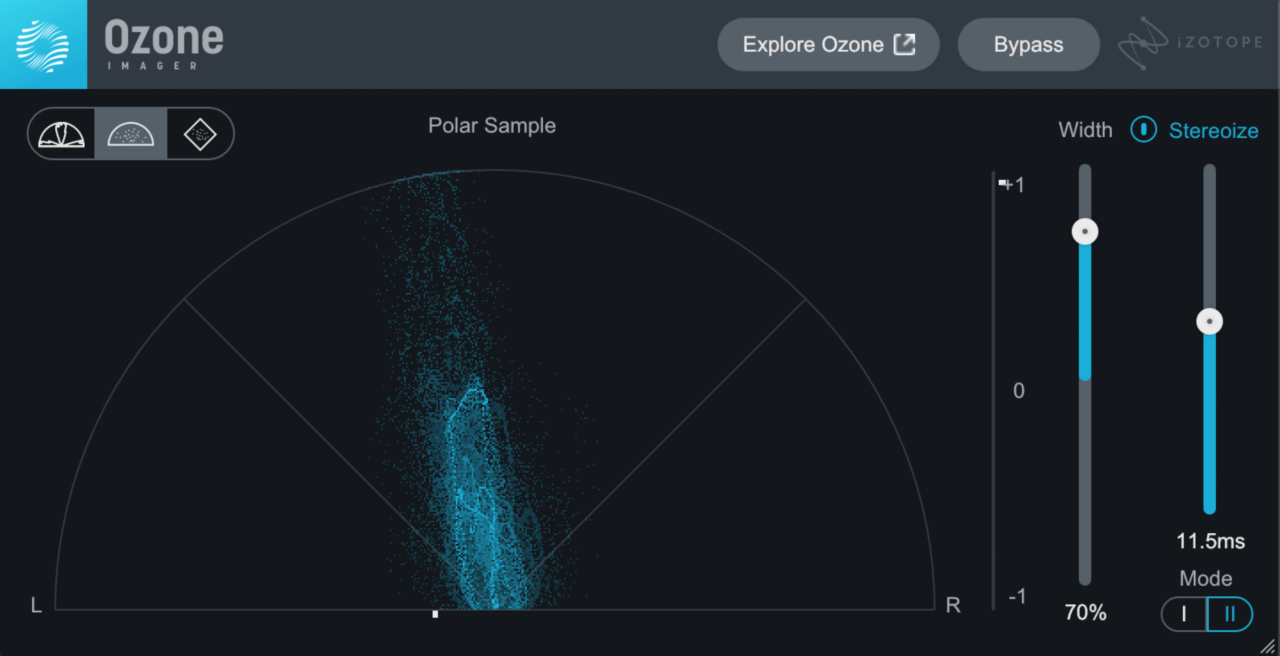 So now that you know what the Haas effect is, you can start experimenting with it in your music. However, keep in mind that it can cause issues with mono compatibility due to comb filtering. If you like the sound of Haas delay, you can give it the best shot at working by following the guidance here. Just remember, there are other techniques for widening sounds too, and Ozone Imager gives you a great—and free—way to experiment with a few of them.

No matter how you go about it, creating width and depth can be one of the more fun and rewarding parts of mixing, and now you have a few more tools at your disposal to help you achieve that. Good luck, and happy widening!