Have you ever been mixing a great track that sounded fantastic—except for one glaring problem: a moment of unprofessional distortion? Audio distortion can be any change in the natural shape of a waveform between two points in a signal path, but there are types of distortion that can make audio sound unpleasant, including the type that’s usually caused by an overdriven preamp or interface.

You might think the whole track is unusable when dealing with overloaded audio, but fear not: RX has many tools to fix the issue.

Learn how to tackle distortion issues in your audio using the following RX modules:

First among them is the RX De-clip module, which can help rescue tracks that were recorded too hot by redrawing squared off waveforms. Listen to how RX De-clip can fix distorted audio:

Here's how to achieve the same results.

How to fix distorted audio with RX De-clip

Here is an example of a vocal I recently received from an actor for ADR looping. The audio is distorted on the words “driver” and “not”, and this is something RX can easily fix. I opened the De-clip module, clicked the “Suggest” button, and hit Render, and the audio cleaned up nicely—but those true-peaks were hovering a little too close to 0 dBFS for comfort. In most real-world scenarios of 32-bit floating point files, this wouldn’t be a problem—if you’re controlling the audio to the very point the listener hears it, and if you know what you’re doing.

Just to be safe, you can lower the gain a little before applying de-clip, like so: 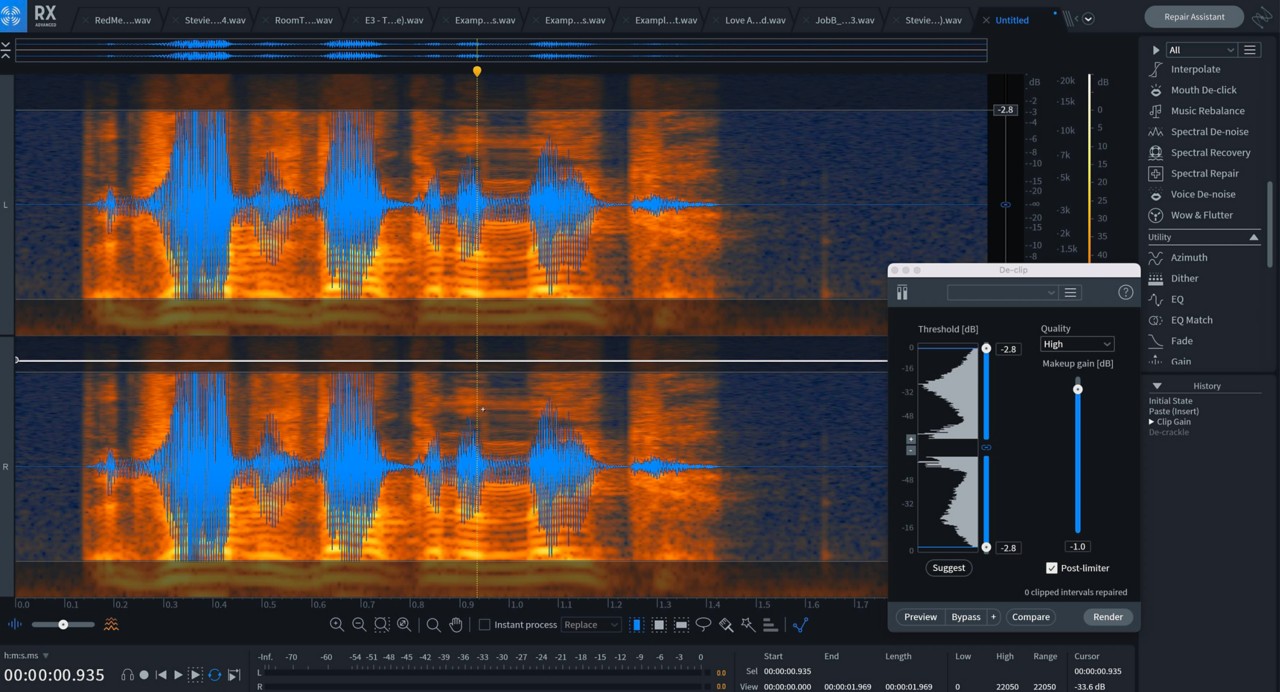 The results will neither sound distorted, nor read distorted: Not bad at all—but if you want to control what you’re doing, you can go even deeper.

I can manually set the threshold to set where the De-clip algorithm should begin to apply processing. I can also de-link the threshold controls. If the clipping occurs only on one side of the waveform, or is more problematic on one side than the other. Here's the move in RX: 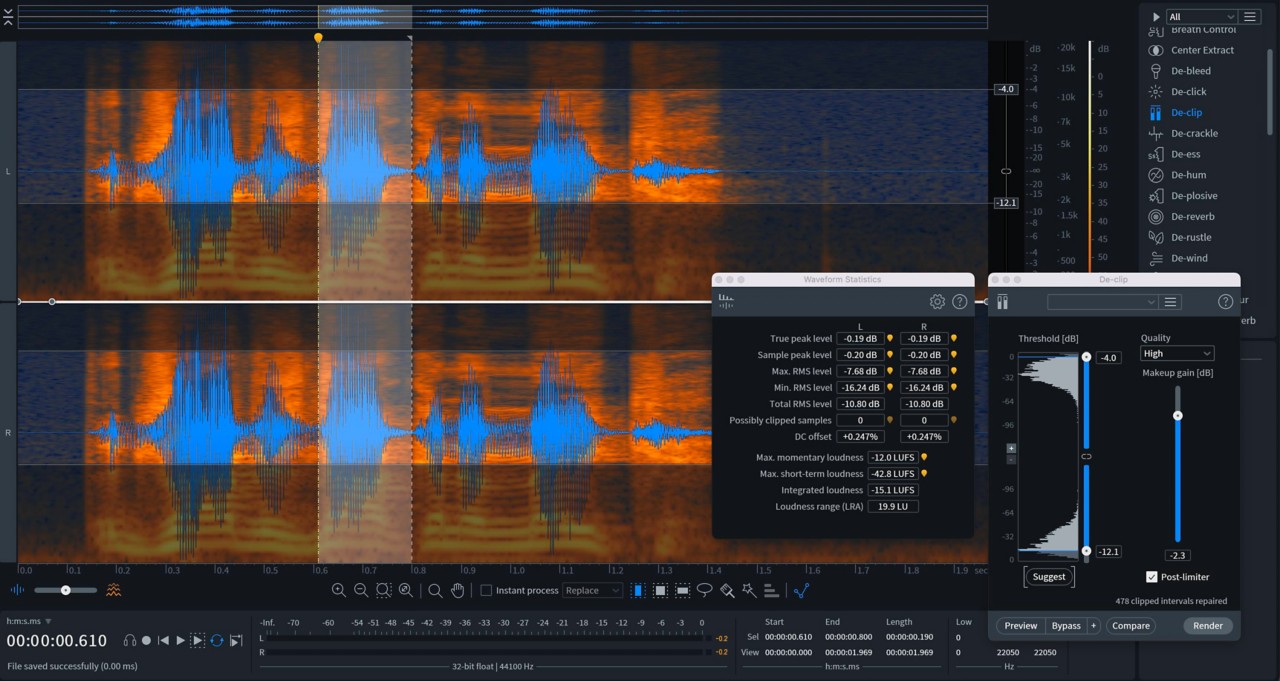 And as a refresher, here is what the vocal sounded like originally and what it sounds like with more sophisticated tweaks within RX De-clip:

You’ll see that in this example, I’m only selecting the audio that is clipping. I’m leaving everything else alone. And I’m tweaking both sides of the waveform independently.

Both options sound better than the original, though I think the manual version is a bit cleaner—and it also has the benefit of being slightly louder. Going in and tweaking the settings allowed me to get a result that was closer to the original signal strength of the original without distorting.

This is a relatively clean clip. With some audio, treating the distortion gets trickier, requiring more complicated techniques. I’ll show you how to get more advanced a little while later, but first let me highlight a few different ways to use RX De-clip and other RX tools when fixing distorted audio.

Looking to clean up your audio?

Follow along in your DAW with your copy of RX.

How to use RX De-clip as a plug-in

How to use RX De-clip in a standalone workflow Zoom on the RX Histogram

De-clip can actually be used in other ways as well. Take this electric guitar note, for example: 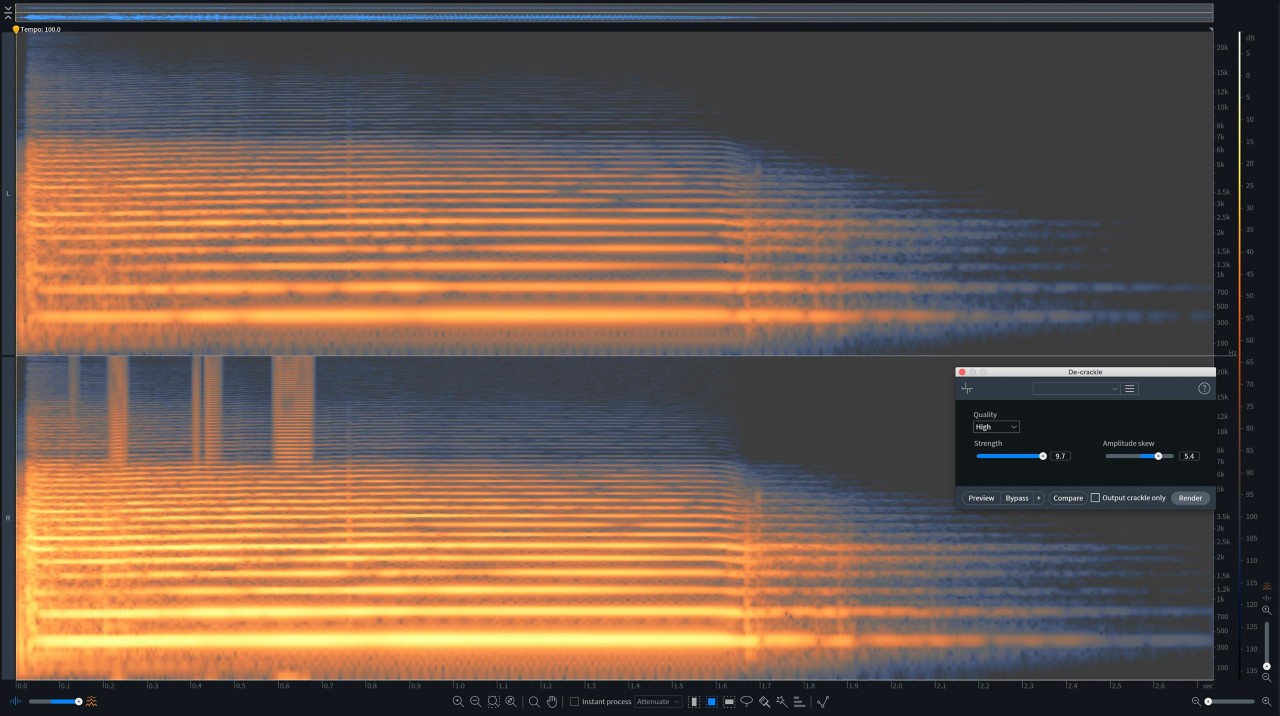 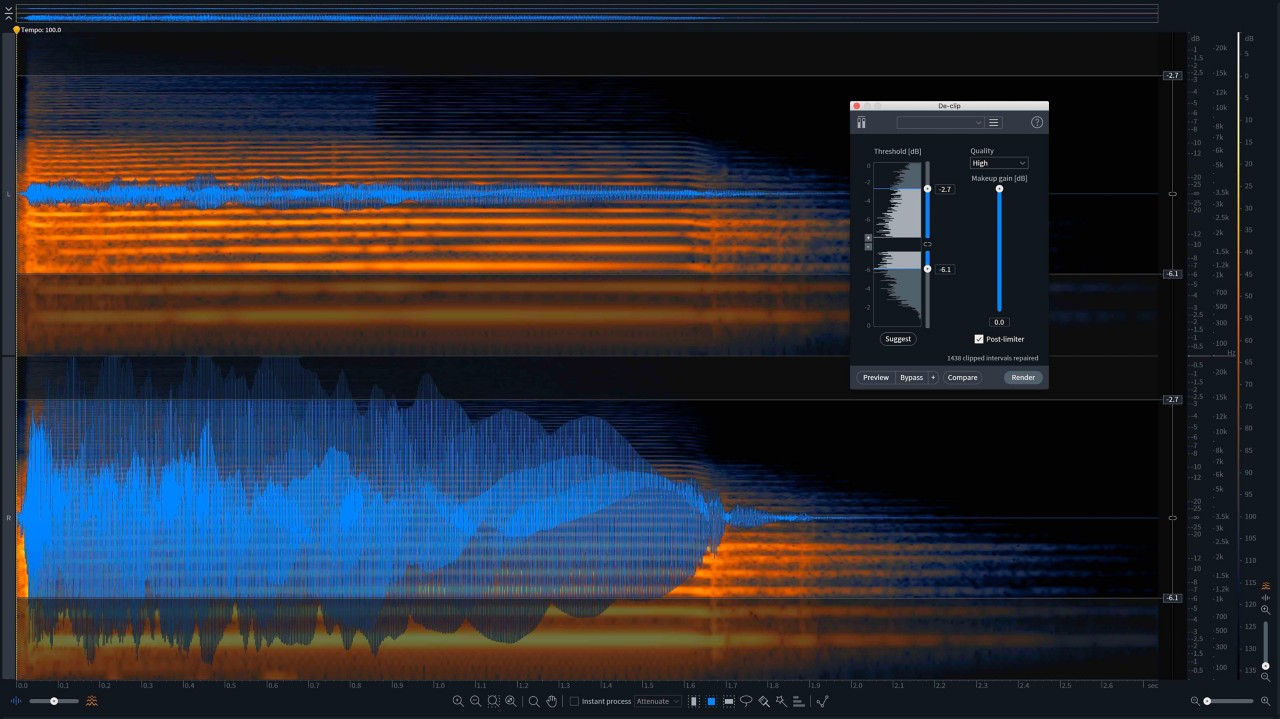 And of course, the results: 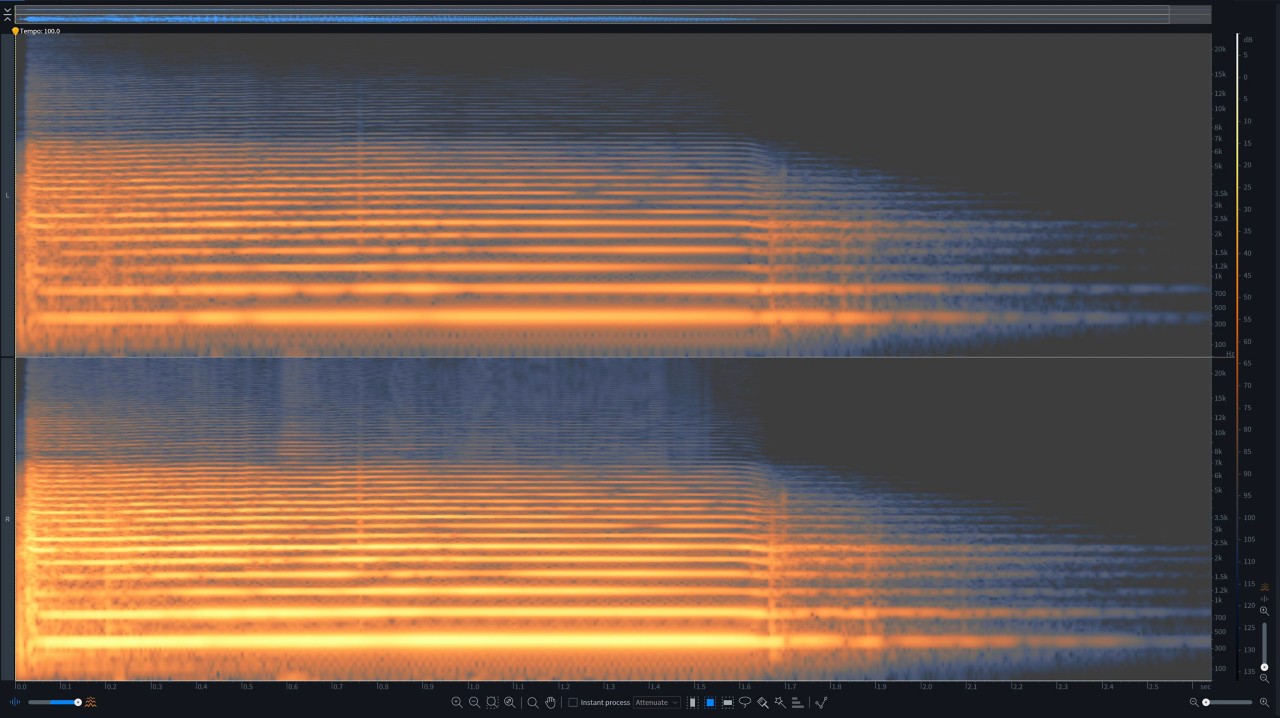 Don’t like the little burr halfway through? Select it with De-clip, preview, and run it again. 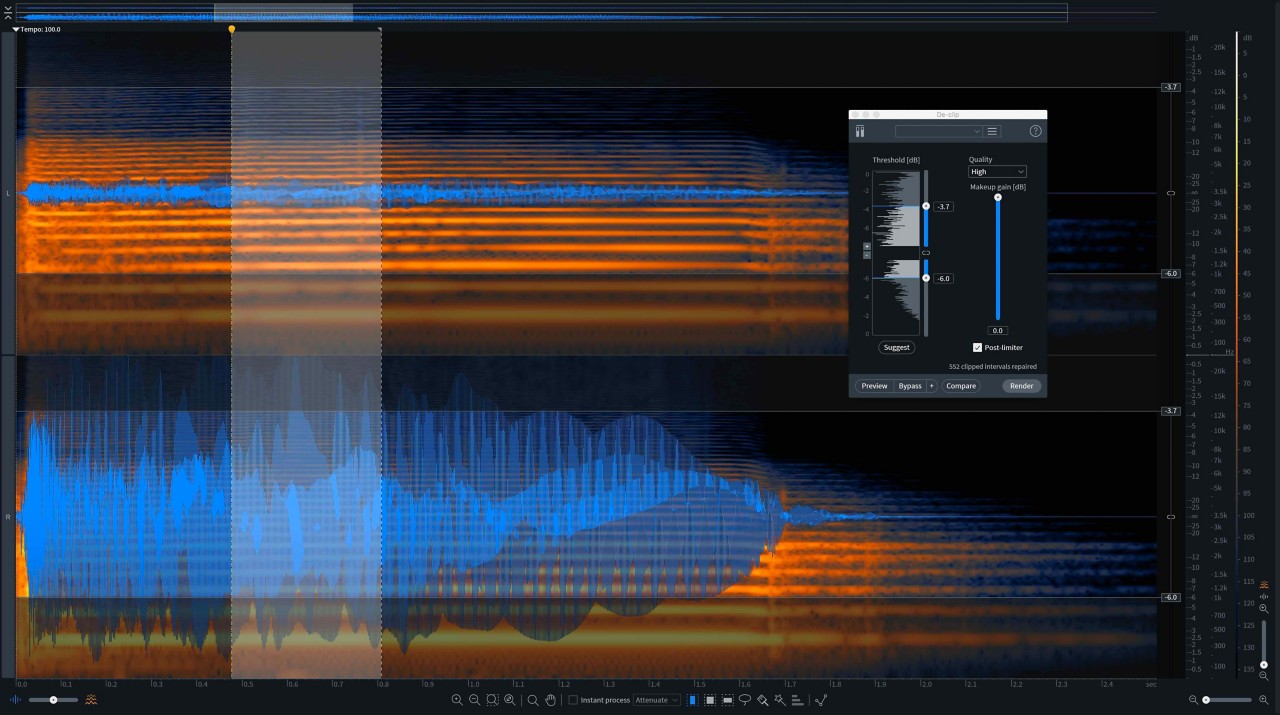 In this example, De-clip won’t fix the burr on the word “stop” because of the nature of the distortion:

Have a look for yourself at the problem: 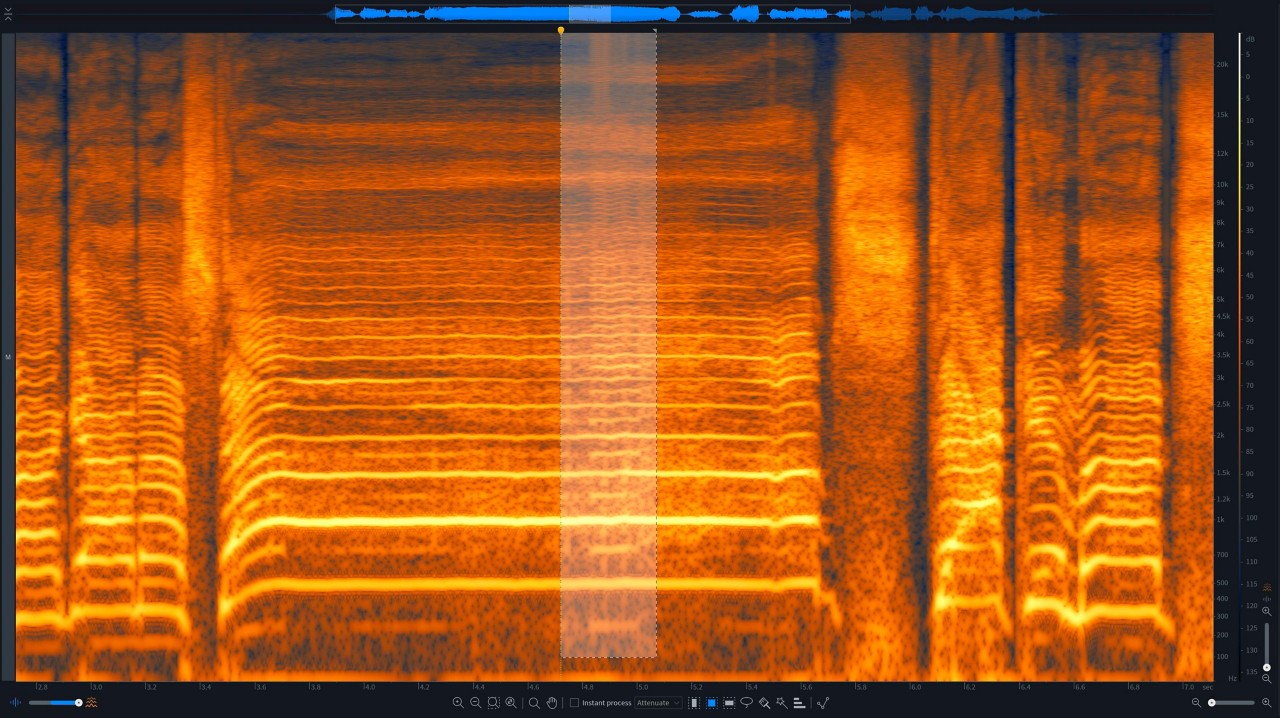 See the long unbroken line stretching horizontally past the selection points? That is the fundamental of the vocal. The lines lasting the same duration above it are the harmonics.

But within the selection boundaries, however, we can see another note has reared its ugly head—and with it, an entirely separate series of overtones. This is burr in the voice that I’d like to remove.

How? I’ll use the Spectral Repair module to remove these lowest overtones, interpolating a result that’s dictated by the audio on either side of the circled issue: 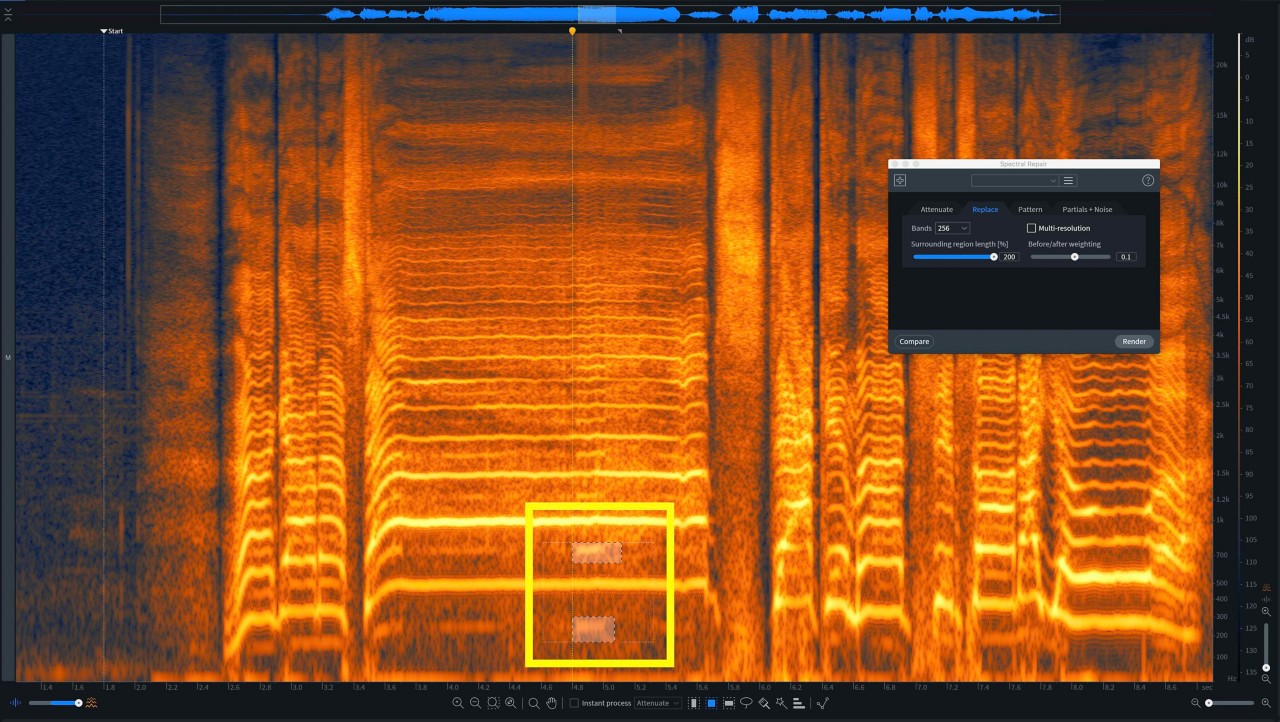 We get rid of those rubbing frequencies with the above settings, but we still have some fizzy distortion to contend with.

The offending issue lies in the high midrange, circled here: 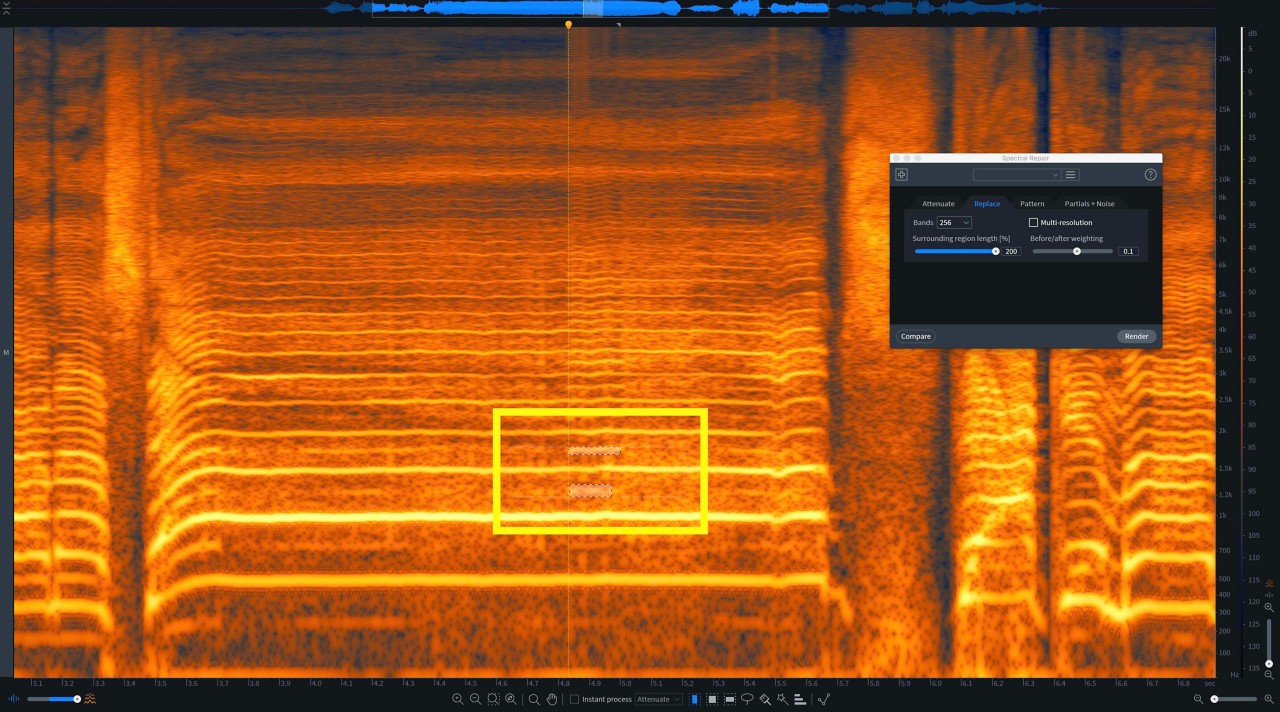 And in the highs as well, shown here: If we use the Replace algorithm in Spectral Repair, we can remove the issue. And no one’s the wiser:

Start fixing distortion in your tracks

We have only begun to scratch the surface of what’s possible in fixing distortion with RX. The tools are so versatile that the sky’s the limit when it comes to ameliorating audio issues. If you want to read more, be sure to let us know, and try out these tips in RX with a free demo.