Background vocals are special. They sit further back in the mix, playing a supportive role from a sonic standpoint, and an important compositional role as a counterpoint to the lead vocal. Because of the unique role they play in your production, background vocals are great candidates for creative processing that may be more difficult to get away with when processing a lead vocal or focal musical element.

In this article we’ll take a look at five different techniques to create these textures, including phasing and flanging, pitch shifting and pitch-related effects, slapback delays, chorus and doubling, and distortion.

By using filters called “all-pass filters,” a phaser basically acts as a comb filter whose position is modulated by an LFO. In other words, it’s several notch filters that make deep cuts at different points in the frequency spectrum, and these cuts travel across the frequency spectrum at a rate and depth determined by the device’s LFO controls. A phaser creates a flanger-like whooshing sound, but one that is more subtle and doesn’t introduce any pitch-shifting effects.

Flanging is similar to phasing, but is a different process and creates a more distinct, pronounced sound. A flanger is a delay device with a short delay time—usually around 20 ms—whose rate is modulated by an LFO. The delay time of the delayed signal is constantly in motion, going back and forth between a certain set of values, such as 10 ms and 25 ms. That movement results in a swooshing sound that also has a distinct, resonant pitch with a notable rise and fall. People sometimes compare the effect to the sound of a jet plane or drain pipe.

Both phasers and flangers are really popular sounds for guitar pedals, classic sounds that musicians have been using for decades. Phasing is also a popular effect on vintage electric pianos like Rhodes, Wurlitzers, and Clavs. Both effects work really well for shaking up the sonic image of your background vocals, and a little bit of either effect can go a long way in your mix.

In terms of tech, Nectar 3 is a great option because its Dimension module includes modes for phasing and flanging, as well as chorus, which we’ll talk about later. You can only select one of these three effects per instance of Nectar 3, but throwing too many effects on your background vocals may cause them to distract from the lead, defeating the purpose of your backing vocals. So in most cases, one of the three will do.

Nectar also allows you to further refine your sound with EQ, de-essing, reverb, and more, letting you dial in just the right amount of these effects. 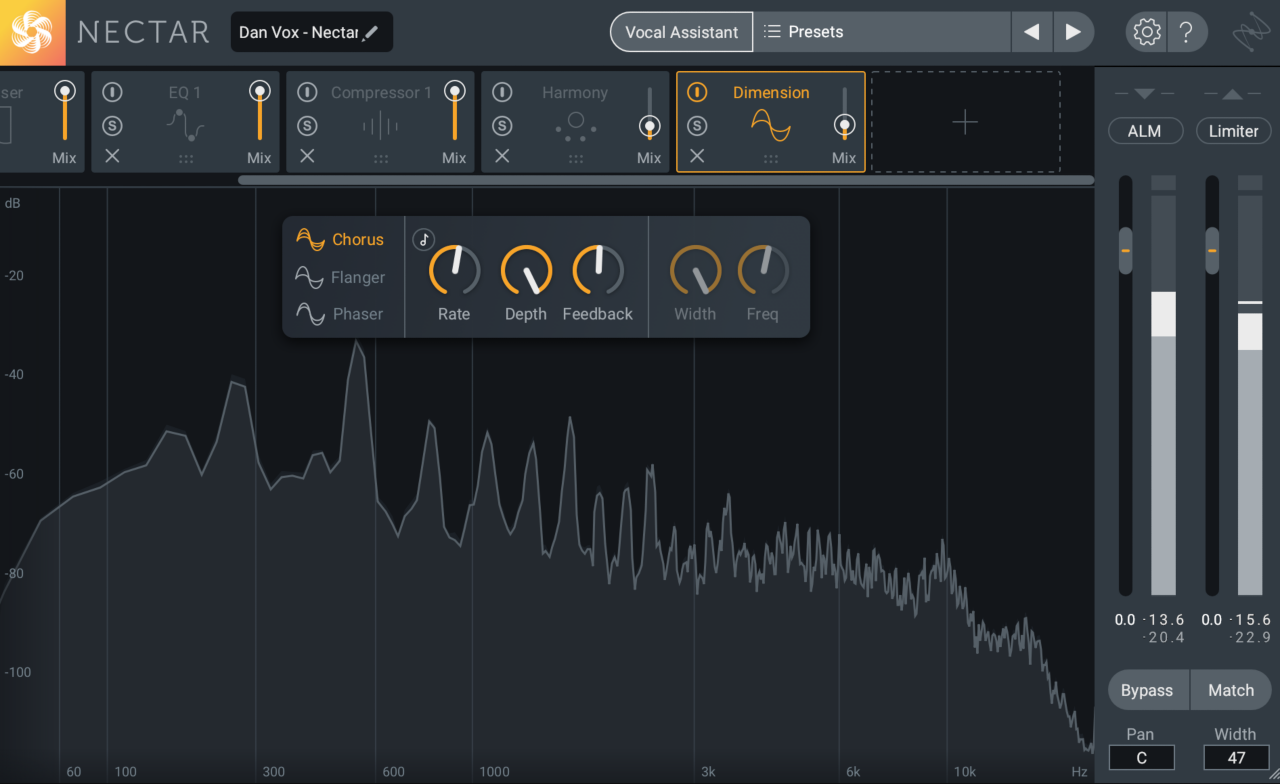 Pitch shifting and other pitch-related effects

Pitch shifting is an effect that can be used to widen background vocals, or any other instrument you need to make feel large. By detuning the left and right channels a few cents in either direction, we create a smearing effect that widens a sound. You can create a lot of texture by tuning the right signal up 3–5 cents and the left signal down 3–5 cents. In the screenshot below, we’ve used a Max for Live device called ‘Dual Harmonizer,’ which is free but only works in Live Suite.

While we’re thinking about pitch, another interesting effect is to hard tune background vocals using something like Melodyne—included with Nectar 3. This can create an interesting character for the backing vocals that separates them from the lead.

This Max device for Ableton Live is set to transpose the left and right signal up and down 5 cents, respectively.

A slapback delay is a delay set with a relatively short delay time, around 40–100 ms. Since the delay time is so short, we don’t perceive it as a traditional delay sound—which is typically synced to a rhythmic subdivision—but rather a thickening of the signal. Slapback was super popular in the 50s, and you can hear it all over old rockabilly and Elvis records.

It can be used on any instrument, but sounds particularly great on guitars, drums, lead vocals, and you guessed it, background vocals. Because this approach will only impart some slight spatial changes to the background vocals, you can mix this effect pretty high relative to the dry vocal, as opposed to some of the other approaches in this article which require a lighter touch.

Most of the time background vocals are layered, meaning they’ll consist of several takes stacked on top of each. If you layered several takes of the same line, you’d create a sound that's known as the chorus effect. Those slight variations in pitch and time that come from each different take create a very full and lush sound. Go listen to anything by Steely Dan for confirmation.

A similar effect can be achieved by using a digital chorus or doubling device. Nectar 3 has a built-in chorus (remember the Dimension module from earlier) as well as a Harmony module that lets you generate doubles and harmonies. iZotope also makes Vocal Doubler: a free doubling plug-in that will add colorful modulations to your vocal, if you don’t own Nectar yet. 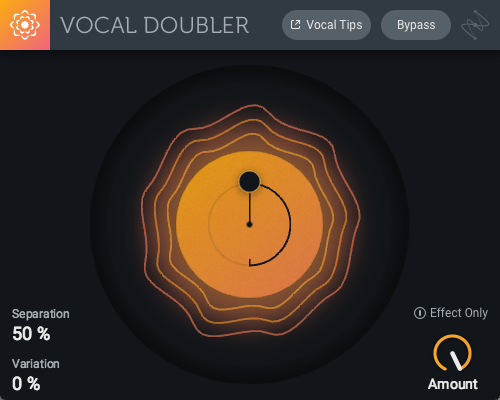 Use the free Vocal Doubler to instantly widen any vocal

Distortion and other sound-mangling ideas

Distortion may not be the first thing you think of when you’re processing vocals, but it’s having quite a moment in pop music, whether through a lo-fi, Black-Keys-type sound, or on a big, powerful vocal like those from Adele or Sia.

Distortion overdrives the input signal, which colors and excites the upper harmonics of your audio. In many cases, background vocals are sung with a more airy tone than a lead, which can crunch up nicely when distorted. This will make them seem louder, so you’ll want to address the distortion amount and output gain at the same time in order to make this work.

Trash 2 is a great plug-in that allows you to further shape the sound by filtering out any unwanted frequency content. It also has a fantastic preset library to help you create the right tone for your vocals in no time. 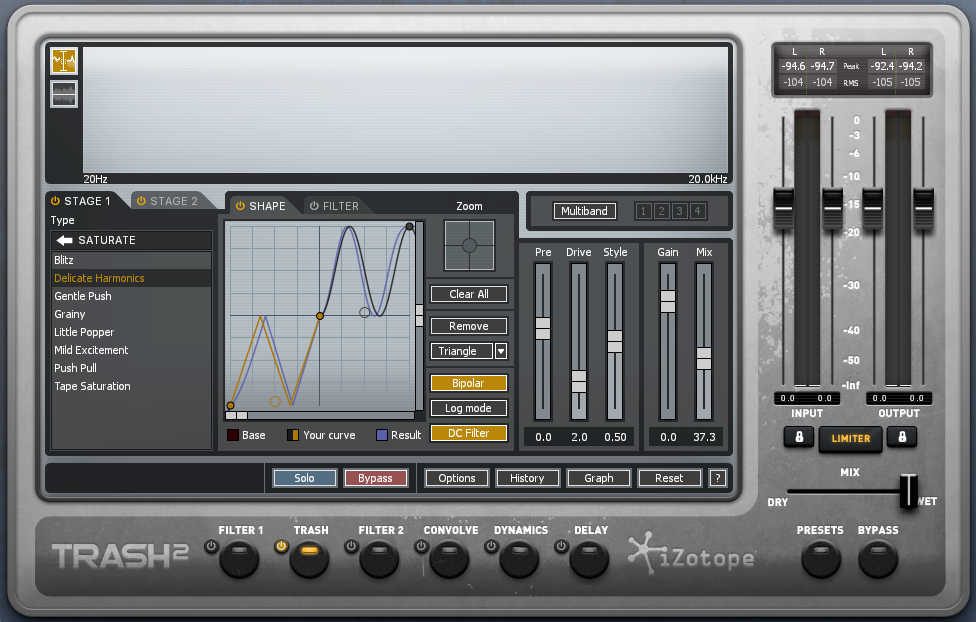 VocalSynth 2 is also a helpful tool for imparting some interesting sound-warping characteristics to background vocals. VocalSynth can create some unique timbres that will really differentiate the backing vocals from the lead, but make sure not to warp them so much that they distract from that lead vocal. 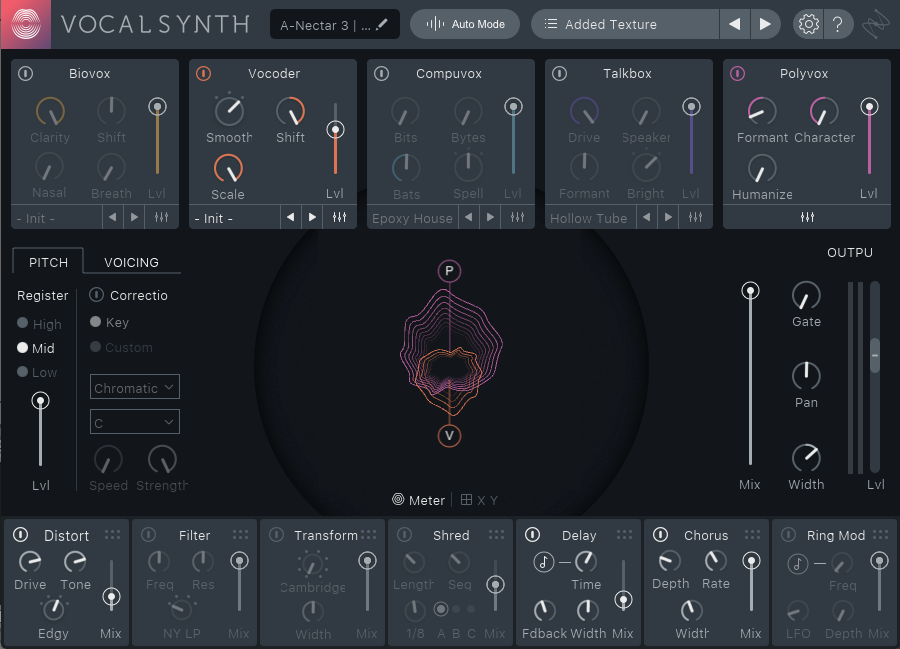 As you can see, there are many ways to texture a vocal, and no shortage of devices to accomplish the task. Many of these should be used sparingly to preserve the original integrity of your vocal performance, but you can typically be a bit more heavy-handed with background vocals than you would be with a lead vocal. This is because lead and background vocals tend to sit in different areas of the frequency spectrum within a mix. Use these concepts to shake things up, smear the signal, or create variation to add color and texture to whatever signal needs a bit of beefing up.