Preparing the studio for a vocal session, recording a vocalist, and yes, even editing performances can be great fun, but I get the most excitement from processing vocals once the audio is in the box (i.e. converted to digital audio in your DAW). In this article, I’ll give you some creative tips for vocal production within the context of hip-hop and modern pop music, though you will find they work well in other style—and sometimes on other instruments—too!

1. Automate your reverb and delays

This is a simple but effective tip many new producers and mixers often don’t consider. After you set up time-based effects like reverb and delay, it will serve you well to automate their parameters to enhance important song moments, like the song title or song section transitions.

Try this: when a lyric ends and there are a few bars to spare before the next line begins, automate a long delay to fill up the open space. If you’re only using reverb, increase the level of the output to create a swelling movement that leads into the following phrase.

Conversely, if your stadium-sized chorus reverbs and delays cross into the verse (or vice-versa) and cause a mess, use automation to tuck in the tails. Considered together, these tiny moments greatly improve the overall quality of the mix. There are many more possibilities—it’s up to you to experiment.

Bottom line: reverb and delay automation can be used to enhance vocals, but also reduce the presence of these effects during key moments to avoid an amateur sound.

2. Process your reverbs and delay

In acoustic genres like folk and jazz, engineers generally keep reverbs and delays as natural-sounding as possible to preserve or gently enhance the space the song was recorded in. Pop, hip-hop, and rock vocals, on the other hand, reach far beyond bedroom studios and small clubs to whatever imaginary location the performer and their team wants to go. Maybe this is in the middle of a tidal wave, atop a burning car in a protest, or halfway between Pluto and Mars.

It's up to you, the producer and engineer, to help bring listeners there by further enhancing reverbs and delays with effects. For these kinds of otherworldly treatments, the presets in Nectar 3 offer a great starting point, as do those in Exponential Audio’s R4 and Symphony. You can adjust each of the 10 modules to taste, as well as re-order their position in the effects chain, allowing for anything from subtle to over-the-top to esoteric. I’ll leave you with an experiment to try yourself. To give individual hip-hop grunts and ad-libs a grungier, more chaotic feel (a style championed by Sheck Wes and Travis Scott), add a slap delay with heavy feedback, which will create a short blast of sonic activity, then saturate the output for a layer of grit. The chain I used and the resulting audio is below, going from dry to processed. 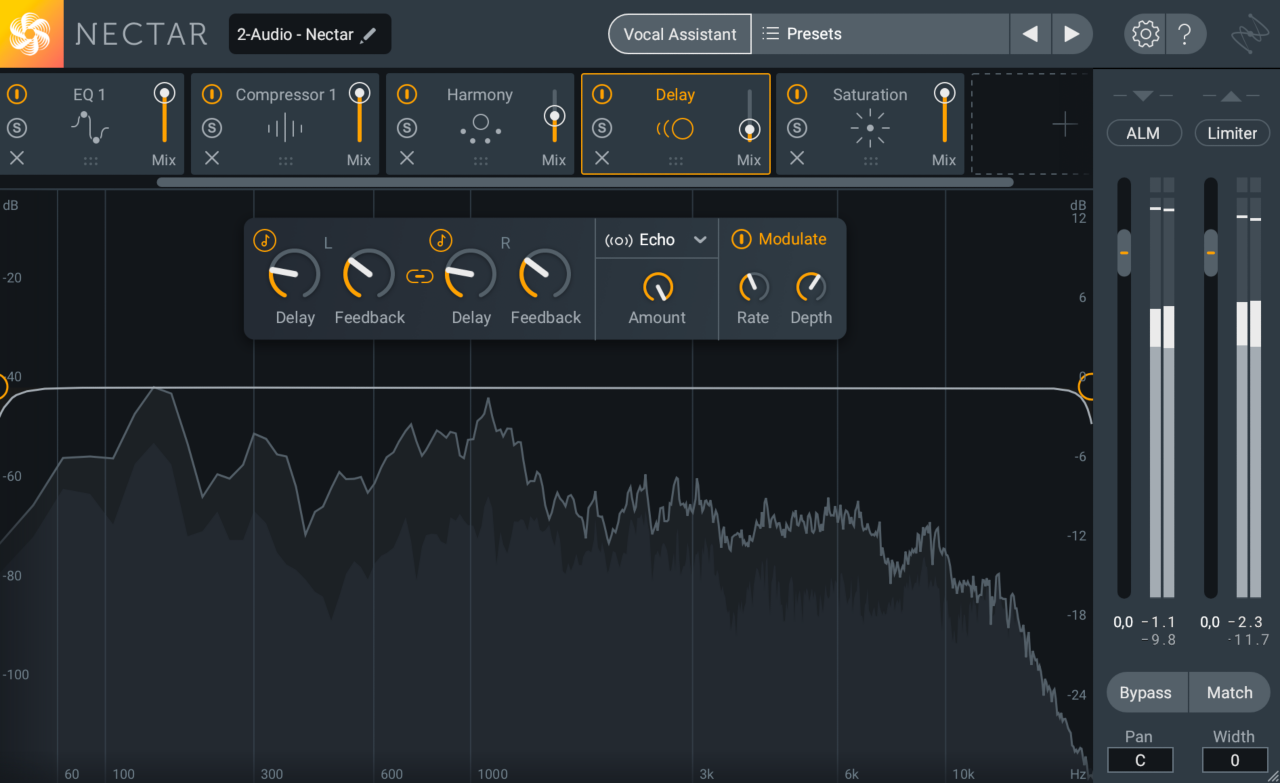 If you want to add this effect to a lead, I suggest doubling the vocal (perhaps with iZotope’s free Vocal Doubler), EQing out everything but the high-mid and high frequencies, then blending the heavily distorted signal in with the original (with a gentle high shelf to reduce masking). This way you get the edginess of the distortion without damaging intelligibility or sounding harsh.

3. Add a lower octave with VocalSynth 2

Hands down, this is my favorite trick with VocalSynth 2. To add weight to a vocal that doesn’t go low enough or to simply give vocals a modern electronic-pop sound, add an instance of VocalSynth 2 with Compuvox enabled. Hit the mixing fader icon on the Compuvox, which will open up the hood of the plug-in and give you total control of the synth’s parameters. 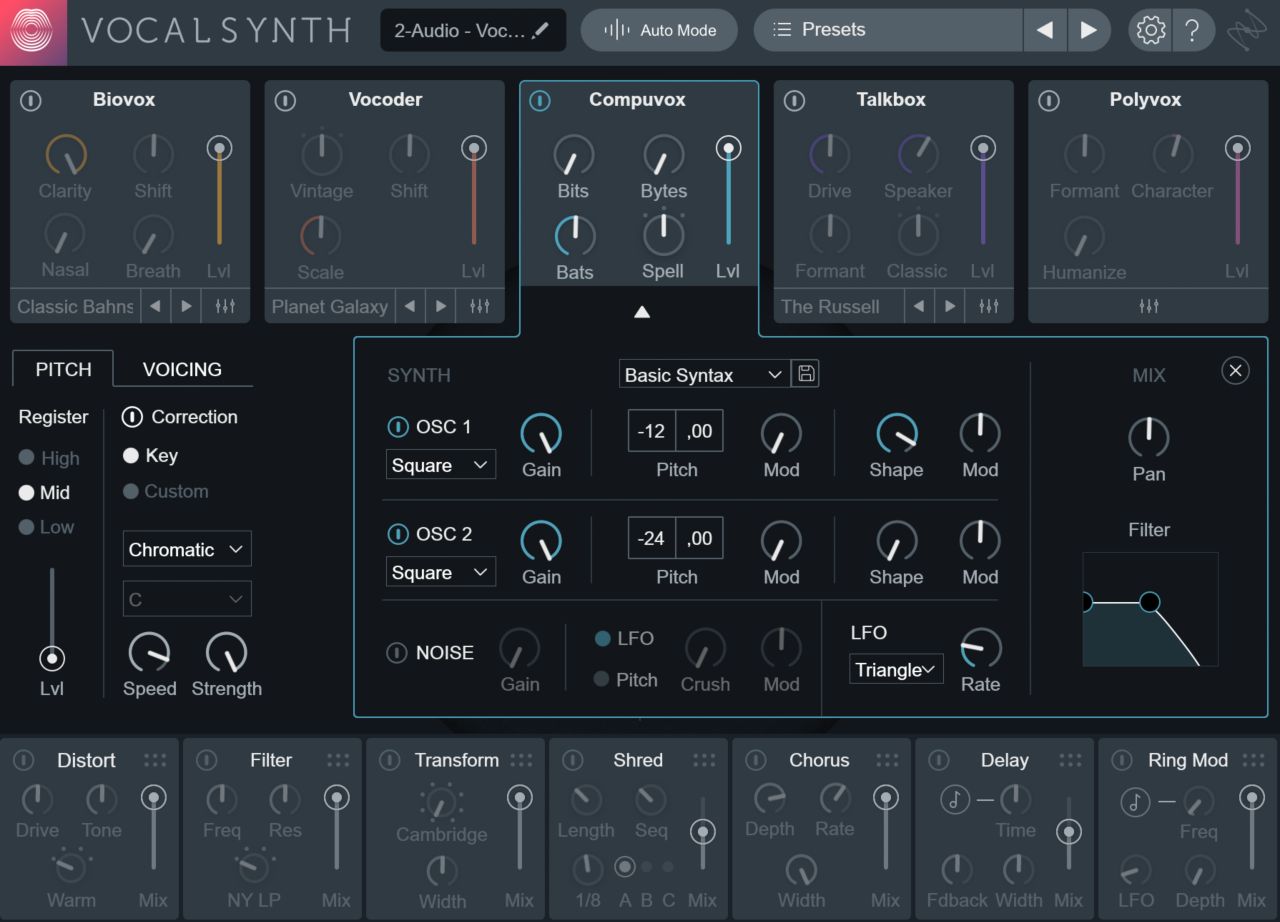 Creating a synth tone in Compuvox

For this specific move, pitch down the first oscillator by one octave (-12 semitones) and the second by two octaves (-24 semitones). Just like that, you should now have a deep, gurgling vocal double that supports the original. Conversely, you can pitch the oscillators up for a high pitch double, or use intervals to harmonize between the original vocal and synthesized tones. Have a listen:

Pro tip: don’t stop with just vocals, this a great trick to beef up electronic basslines, monophonic synths, and drums.

4. Get natural harmonies with Nectar 3

You don’t always want a vocalist to sound like someone from another planet. If you mix soul, acoustic music, or more restrained pop and need some backing harmonies, give the Harmony module in Nectar 3 a shot. It offers up to 12 additional voices (based on intervals according to the scale set in the Pitch module) that support the lead in a natural way. You can also pan, filter, and change the level of the harmonies to give them a looser, live sound. Here’s an example: 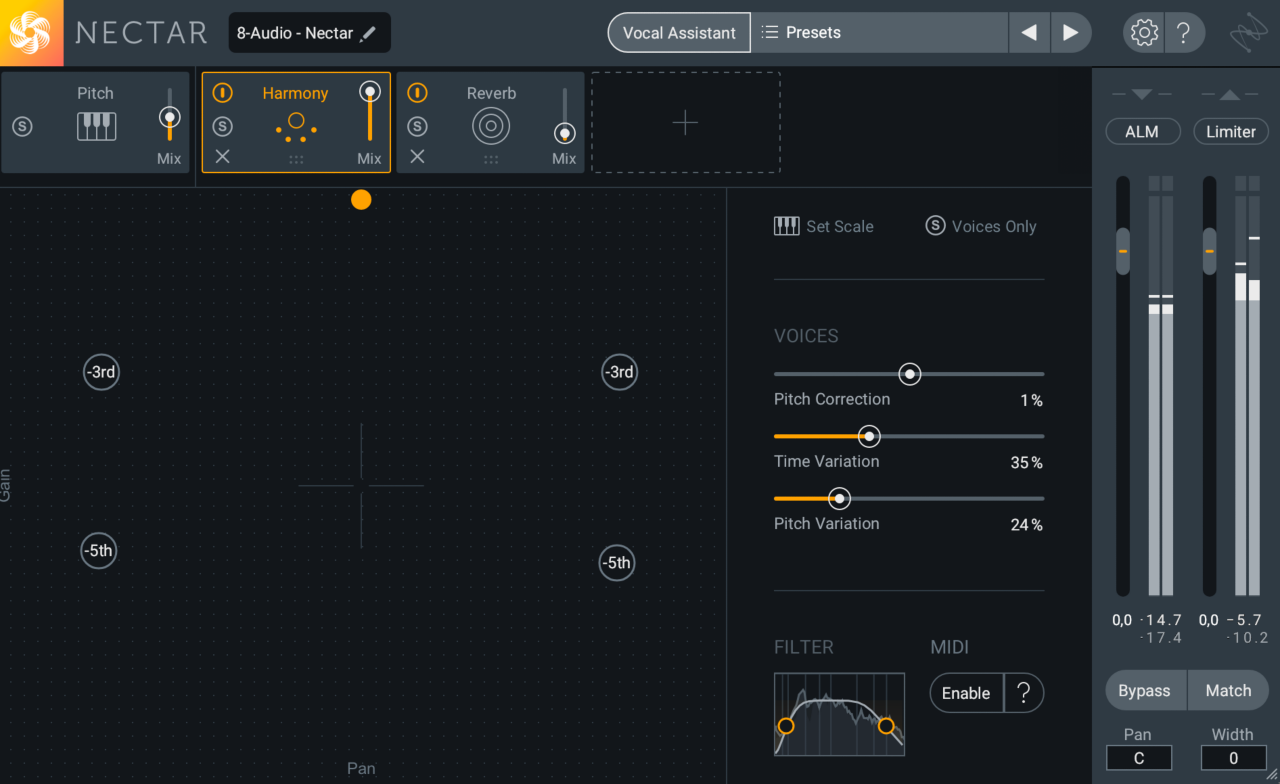 Playing with the pitch of each note will produce a haunted choir that wouldn’t be out of place on a Frank Ocean or Arca song. To do this, I suggest enabling MIDI mode, where you can select the specific notes for the voices.

Bonus tip: Choosing “Voices Only” allows you to solo the added harmonies, opening up a range of creative options. For example, you could leave the original vocal on its own track and have the harmonies join in during the chorus, enhanced with reverb or modulation. To impart a vintage vibe (much like a sampled record), open up iZotope’s (free) lo-fi weapon, Vinyl, which includes adjustable controls for pitch warbling, noise, and filtering (based on era).

The way we move our vocal tract, mouth, and jaw when we speak or sing changes the timbre of our voice. Try it for yourself: “squeeze” your throat muscles and you can get a deep, Clint Eastwood-like voice. Or keep your mouth tight and your voice will sound more nasally. A formant shifting plug-in (offered within Nectar 3 and VocalSynth 2) emulates this process in a DAW, allowing you to shift the timbre of a vocal without changing its pitch.

You can slide the formants of vocals up or down for entire sections or at the tail end of specific words to great effect. Some dance music producers (like Burial) do this to give the impression of a deep, male voice switching into a higher-pitch, female voice, and vice-versa. I’ve come up with a subtler technique, which you can hear below.

You’ll hear the dry audio first. Keep listening and pay attention to the word “know” in the processed clip that follows. I copied the word twice, dragged the copies further down the timeline, and slightly adjusted the formants of each version. This way, when the word “know” repeats, it doesn’t just sound like a standard delay throw. You actually get a different-sounding voice (but not so different that it distracts).

Stick around for the end of the clip, where I solo the formant-shifting vocals so you can what they sound like against the piano.

There are a number of reasons to process vocals: to make a mix sound more expensive, to communicate lyrics with more emotion, and to bring out the natural character of a performance. The tips in this article should help you find the right balance in your next mix.