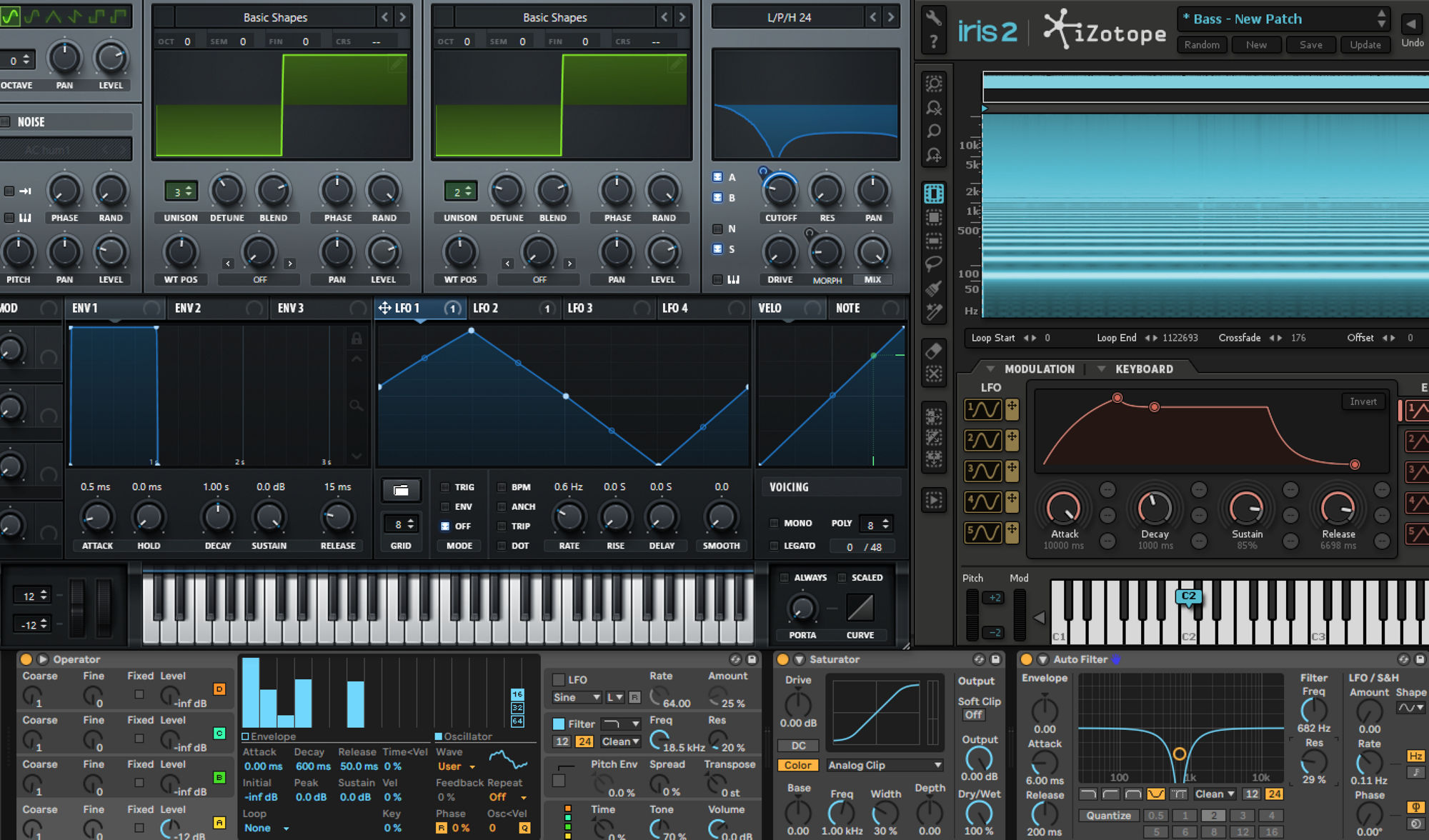 It’s the twenty-first century. You can compose, produce, mix, master, and release a track, all from one computer, with hundreds of amazing products out there to help. Many of these products are synthesizers, which can contain thousands of pre-made sounds to choose from. These products range from Xfer Records Serum, Native Instruments’ FM8, to our very own Iris 2. In addition to synthesizers, most DAWs on the market comes with a ton of these additional sounds to choose from.

That being said, it is surprisingly easy to run the inspirational well dry after browsing through seemingly infinite presets. Part of this is option paralysis, and another part is that many of these sounds are actually very similar. This can unintentionally cause different productions to sound vaguely alike. I can’t be the only one who’s heard a song on the radio and said, "I know that kick sound," or "That’s Synth Drone 308 from ______ preset library."

One way to combat this is to understand the basic functions of a synthesizer, which enables you to create custom sounds and presets from the ground up. This can be an easy yet significant step in carving out your sound.

This article aims to equip you with the building blocks to dive into your friendly neighborhood soft-synth, and start creating your own sounds for use in your music production. Regardless of what synth you use, you will always find some form of these components in each one:

An oscillator is how synths generate sound. It is a single-cycle waveform that is looped to match a specific pitch. This pitch is usually determined by what key you play on your MIDI keyboard. If you play an A4(440 Hz) on a MIDI keyboard that is triggering a synth, the oscillator will loop fast enough to mimic the pitch of A4. Here is an example of a sine wave oscillator playing at 440 Hz:

Sine Wave At A4

While it sounds clearly like the note A4, the sine waveform is actually looping at such a fast speed that it’s being perceived at this pitch. Neat, huh?

With oscillators, you aren’t limited to just sine waveforms. There are a number of waveforms that you can use which all have different tonal qualities.

You can see here what each of these waves look like.

The building blocks of sound, sine waves are as basic as it gets.

Sine Wave At A4

Saw Wave At A4

Square Wave At A4

Triangle Wave At A4

If you’re interested in hearing more audibly what the oscillator is doing, play a really low note on your keyboard (C0 for example) and have it trigger a saw or square wave. As you press the key down, you will hear a waveform looping quickly to mimic this low pitch. Here is what a saw wave sounds like at C0 (16.35 Hz):

Many popular soft synths like Xfer Records Serum, Native Instruments Massive, or Operator in Ableton Live will play back a basic oscillator waveform when you instantiate them in your DAW.  However, some synths will load with a factory preset when you first open them, such as u-he Diva.

Choosing a Synth: If you are looking to make sounds from scratch with your soft synth, I would recommend using a synth that initializes with just a raw oscillator waveform. However, if you are using a synth that loads with a factory preset, navigate to the preset menu and find a preset called Default, Init (short for initiatialize), or something along those lines. This will give you a preset with just a raw oscillator and is the ideal starting point for creating a new sound with your soft synth.

An envelope is a time-based control that traditionally controls the amplitude of a synth’s oscillator over time. Below is how an envelope is displayed in Iris 2. Most envelopes are broken up into four controls, commonly abbreviated ADSR: Attack, Decay, Sustain, Release.

Determines the time it takes the amplitude to reach its maximum value.

Determines the curve at which the amplitude reduces after hitting its maximum value.

Begins after the decay ends, defines how long the amplitude where the decay finishes is sustained.

Another decay curve that is only triggered once the key on your keyboard is released.

This is what a sine oscillator sounds like before and after the above envelope is applied to the oscillator’s amplitude:

Now, traditionally, envelopes are mapped to the amplitude, but most soft synths allow you to map an envelope to pretty much anything in the synth you want, including a….

A filter is probably the most audibly recognizable synth control out there. It is responsible for suspenseful buildups before your favorite "sick drops," cinematic sound FX in your favorite films and video games, and the infamous dubstep wobble. If you mix your own music, you’re probably familiar with at least a few filter shapes (even if you don’t know it). Filters are the same as EQ, except instead of boosting or cutting at specific frequencies, it cuts out all frequencies above or below certain frequency cutoff points. Here are a few common filter types:

This filter type cuts out all frequencies above a user-determined cutoff point. Here is what a typical low-pass filter curve will look like with the cutoff at 800 Hz, as shown in Ableton Live’s Auto Filter plugin:

This is what a square wave sounds like before and after a low pass filter is applied:

High-pass filters cut out all frequencies below a user-determined cutoff point. Here is what a typical high-pass filter curve will look like with the cutoff at 800 Hz, as shown in Ableton Live’s Auto Filter plugin

This is what a square wave sounds like before and after a high pass filter is applied:

This filter type cuts out all frequencies below AND above a user-determined cutoff curve in the middle of the frequency spectrum. Here is what a typical band-pass filter curve looks like:

This is what a square wave sounds like before and after a band-pass filter is applied:

A Low-Frequency Oscillator, often abbreviated LFO, is an oscillator that is oscillating at such a low frequency, it can be used to rhythmically modulate other parameters in a synth such as amplitude, filter cutoff, etc. This is often the other half of the infamous dubstep wobble, which is when an LFO modulates the cutoff of a lowpass filter. Like regular oscillators, you can use different waveforms, the shape of which will dictate how the LFO modulates whatever parameter it’s controlling.

An important distinction here: LFOs are rhythmic-based modulators, while envelopes are time-based modulators. As far as which one to use to modulate a certain control on your synth, it really depends on what you’re going for! LFOs are very musical, because they can be synced to the tempo of your DAW session, and are what allow for much of the rhythmic movement in your favorite electronic music’s synth sounds.

However, if you want some more musically unpredictable results, sometimes un-syncing your LFO from your session’s tempo and automating the LFO rate against a steady beat can produce very exciting results. In this mode, it will modulate based on Hz instead of musical sub-divisions (quarter notes, eighth notes, etc.) relative to the host tempo. On the other hand, envelopes work great for synth sounds that are meant to add texture and depth to your productions or compositions. They can be great for synth pads or atmospheric melodic sounds.

Each soft synth will vary in how they allow you to map LFOs or envelopes to the parameters that you’d like to adjust. I would recommend referring to your favorite synth’s documentation for more info on how to use LFOs and envelopes to modulate things like filters, oscillator amplitudes, and whatever additional effects your synth has to offer.

I’m hoping that this will give some additional insight into the basics of a synthesizer, and enable you to more comfortably start making your own synth presets from scratch.