Sonically, the acoustic guitar is one of the more complex sounds you can have in a production.  Whether you are starting with a great acoustic guitar sound, or one that needs a little help, we’ll talk about a few ideas to help you mix the acoustic guitar, including controlling the dynamics of your guitar with compression, removing trouble frequencies with EQ, and creating space for them in the stereo field with panning and reverb.

In this tutorial, I’ll be using audio examples from a new album from Florence Wiley I recently mixed, along with plug-ins included in iZotope’s Music Production Suite.

Like most recorded sounds, using an EQ to subtract unwanted frequencies is a good start. Even the nicest acoustic guitar, performance, and recording often has frequencies that jump out on certain notes, and swells or rings in certain places. Removing these issues will actually help bring everything good about the sound to the top, give you more control in the mix, and result in a clearer, fuller tone. 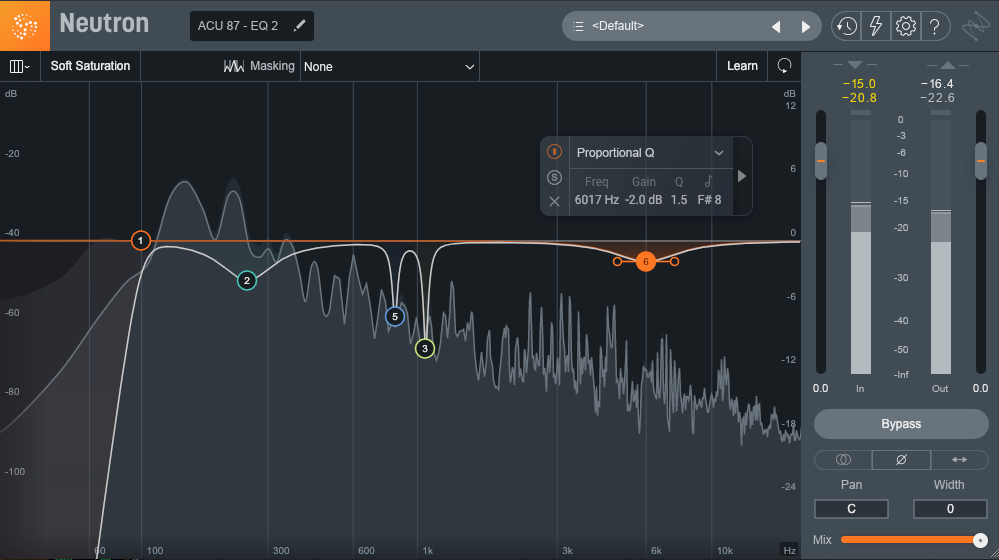 The screenshot above shows how I’ve addressed some common “problem zones” on an acoustic guitar with Neutron. We’re using a high-pass filter to carve out unnatural sub frequencies, a band to reduce swelling in the lower mid-range around 200–400 Hz, a couple sharp notches of ringing mid-range frequencies, as well as gentle cut around 4–6 kHz that had some unwanted brittleness in the high end. Those notches for ringing mid-range frequencies can really do wonders!

To a certain extent, the ringing of an acoustic guitar is natural, but when you’re hearing it cut through everything in the mix, try boosting little areas until you find the offensive frequency—then cut it out until you hear the ringing dissipate to the desired level.

Additive EQ can be also useful, but is used less than subtractive EQ when mixing acoustic guitars. The most useful boost I find is to add “air” or “sparkle” to the top end to give that extra little clarity and 3D vibe. Try using a shelf to boost 10 kHz by 1–2 dB or higher—sometimes a 12  kHz, 15 kHz, or 20 kHz bump can really open up the sound! On occasion, if an acoustic guitar is recorded from far away, you might find yourself wanting to add a bit of low mid frequencies around 150–250 Hz to make it sound more full.

Compression is a great tool to even out dynamics and fill out the tone of a guitar. Different settings will be more useful for certain performances and styles. Playing with the attack and release times is really useful for all styles of compression to affect the sound of the guitar.

For example, using a faster attack and slower release will help grab aggressive picking sounds, and slower attack and faster release times will help keep the recorded sound of the guitar more natural while subtly bringing quiet parts forward in the mix. Use the threshold and ratio to control where and how much compression you desire. You might use a low ratio, slower attack, and fast release compressor for a “warm hug” style compression only compressing 2–5 dB to keep a consistent strumming guitar right where you want it for the whole mix. If there’s something that has notes jumping out that need to be quelled, a high threshold, high ratio, faster attack, and fast release is a great way to quickly grab a runaway note and not much else. This can be especially useful for finger picking where a certain note might come out of nowhere quite a bit louder than others.

Check out the difference between a compressed and uncompressed acoustic guitar—it really pushes the quieter notes forward and helps grab unwanted peaks!

Panning acoustic guitars to sit well in the mix

Acoustic guitar is emblematic of many styles of music, and thus, is often put in a noticeable place in the mix. Like we just discussed, EQ and compression will help give you the control necessary to place your guitar just where you want it. In a scenario where the song is mostly acoustic guitar, vocals, and perhaps a sparse arrangement, you will likely find happiness having the guitar just below the volume of the vocal. Try putting it where you can hear everything happening with the guitar, but without covering up the vocal.

For panning acoustic guitar, it’s common to have the acoustic guitar close to the center, or just barely off center, if you need a bit of clarity or separation from the vocal in the center. Balancing acoustic guitar in the mix

Although keeping an acoustic guitar to the center is quite common, panning it to one side, in balance with something else, can be really useful for freeing up space in the center for vocal, kick, snare, bass, etc. For example, if you have a piano, or an electric guitar, that is also playing the entirety or most of the time with the acoustic, it might sound nice to try and spread those elements left and right. As a warning, It might come off as distracting or unbalanced to put it too far off to one side when you don't have something to balance it with on the other side.

How do you mix multiple acoustic guitars?

Using a doubled performance, or additional acoustic guitar playing a similar but different part, can be a really great way to widen a mix. Two guitars playing some kind of double will sound complementary in a variety of ways. More simple strumming guitars can sound good panned as far as 100% out on each side, and as the performance gets more complicated, I tend to bring them in.

Keeping them in relatively similar volumes and spaces in the L and R channels is a good place to start to help create a balanced mix. Check out how full and wide these hard panned stereo acoustic guitars sound:

Reverb is a great way to give your acoustic guitar a cool effect, add some extra space in a mix, or even fit it into an acoustic space that other recorded parts of the song inhabit. Many types of reverb sound great on acoustic guitar. Plate reverb is almost synonymous with acoustic guitar driven singer-songwriter, folk music, and rock music from the 1970s, as well as modern indie rock genres that borrow stylistic cues from the past. Similarly, but with a bit less sheen and modulation, halls, rooms, and chambers are great for spacious and cleaner reverb sounds. Those can be useful since acoustic guitars tend to have lots of harmonic ringing that can set off unwanted resonances from more colorful reverbs like a plate or spring.

Listen to how I used some room reverb sound on the stereo acoustics to reflect the sound of the the instruments, and more modulated plate on the lead acoustic in the center to give it a cool effect with Neoverb:

Working with EQ, compression, doubles or multiple guitars, and some reverb is a solid start to a great mix with acoustic guitars. Try experimenting with effects, placing your guitars in different stereo positions, and using different song arrangements to get a feel for how to mix acoustic guitars. All of these concepts can be practiced with a free trial of iZotope’s Music Production Suite Pro membership or getting your copy of Music Production Suite 5 Universal Edition, with access to Neutron, Neoverb, and more. Happy mixing!