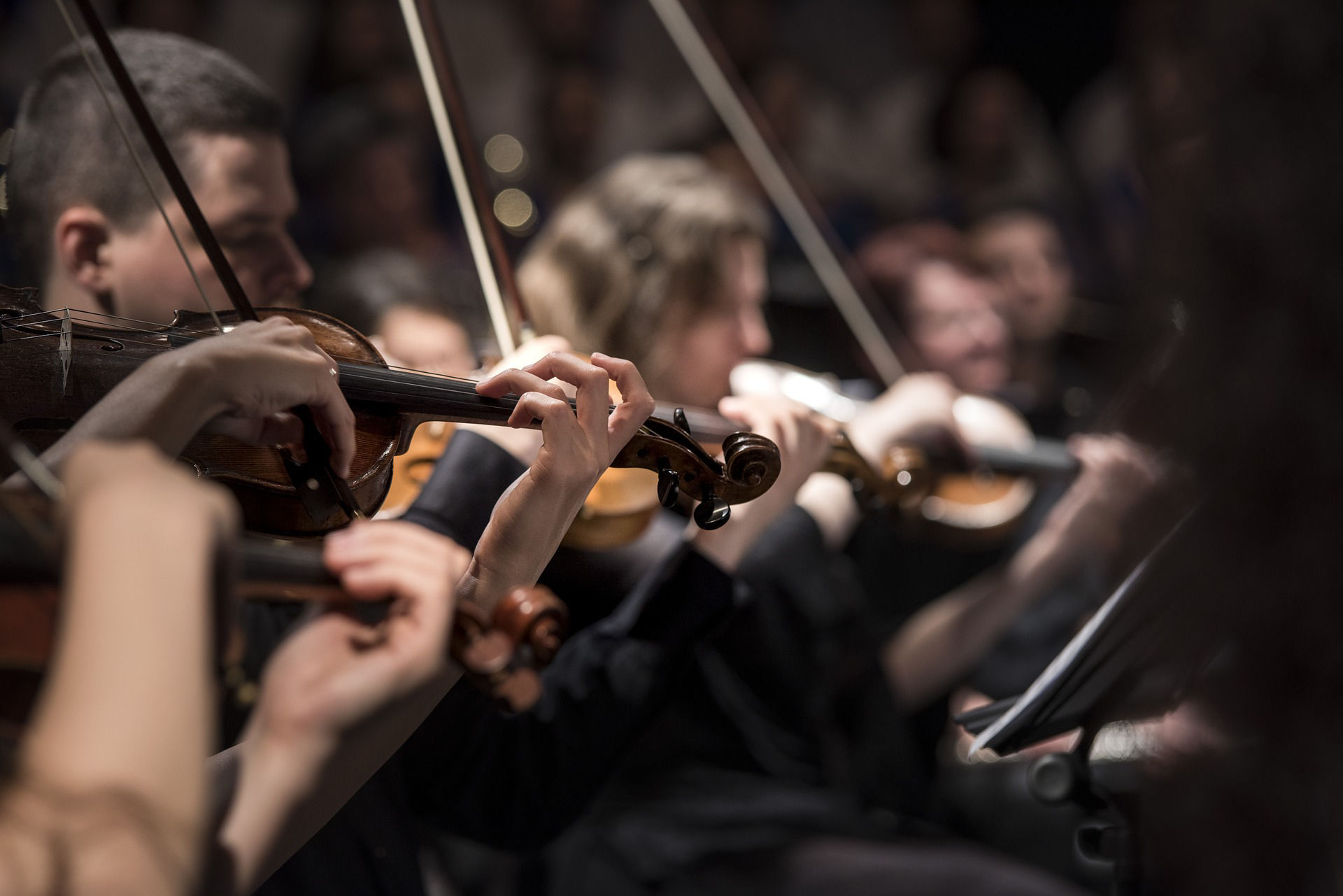 Classical music is known for its nuanced sonics—from the wide dynamics all the way to its vast range in the frequency spectrum. With that comes a unique set of challenges for sound engineers when recording, mixing, and mastering classical music.

Choral music, as a classical subgenre, also has specific engineering challenges that revolve around the nuances of a live vocal ensemble performance.

In part one of this article, we delve into what makes a classical recording different from modern music productions. With the added insight of iZotope’s Education Director and seasoned mastering engineer Jonathan Wyner, we explore the unique characteristics that define how classical music has been recorded, mixed and mastered over the years. For part two (stay tuned!), we walk through how I used Ozone, RX, and Exponential Audio reverbs to engineer a classical choral album I recently recorded, mixed, and mastered (featuring Los Angeles-based choral ensemble Tonality and their album entitled Sing About It.)

Though this series takes a deep dive into choral music subgenre of classical music, we will be covering other aspects of the vast world of the classical genre in the near future. Stay tuned!

Contemporary and classical music rely on the same basic fundamentals to bring the music to life—from the use of microphones and an audio interface/recording device to record the musical performance, the need for a mixer or a DAW to achieve the proper mix balance of the sound sources, all the way to the goal of achieving optimal loudness and balance in between tracks to create a cohesive classical album. 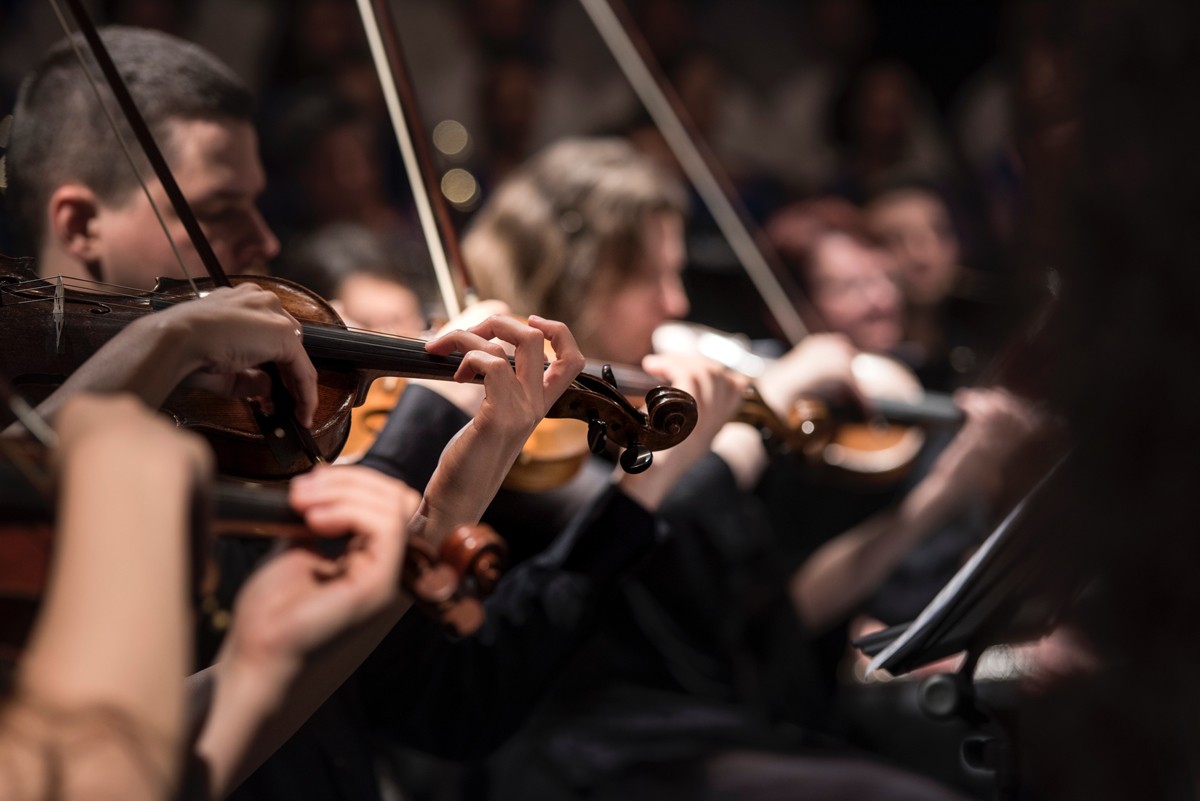 The approach to engineering contemporary vs. classical music can be drastically different.

With so many similarities, it might not seem obvious at first, but the approach to engineering contemporary vs. classical music can be drastically different. This difference lies in how each approach recording, mixing, and mastering.

The most significant difference between contemporary and classical productions lies in the recording process. For one, overdubs are taken out of the equation because classical music is rarely ever recorded in a dry studio environment where you can isolate the audio for maximum control in the mix stage. Instead of a recording studio’s dry acoustics, classical productions thrive on a location recording setup where the acoustics have been thoughtfully taken into consideration. A venue’s acoustics are a big part of the experience when listening to a live classical performance.

It’s also imperative that the chosen venue is not riddled with too much external noise like heavy traffic or rain that could make your recording virtually unusable, even with access to noise reduction tools. A venue’s acoustics makes up a big part of the experience when listening to a live classical performance.

“The workflow when recording classical music differs from studio-based albums. The concept of overdubs doesn't really exist. Instead, you stitch together multiple takes of the same material in such a way that it feels like a single performance.

As a result of this method, classical productions are a lot more performance-critical. The performance has to rise to a certain degree of accuracy in terms of pitch and timing for it to even be usable. Therefore, the skill of the performer needs to be extremely high when you're making a great classical recording.”

Besides location and a top-notch musical performance, the need for microphones and equipment that can effectively capture all these delicate nuances in classical music are an absolute must. As Jonathan Wyner shares:

“Mic choice and mic technique are critical because they set the whole chain of events moving forward. If you’re left with an edgy vocal recording, it's difficult to EQ in such a way that you don't hear artifacts. Choosing proper mics, mic preamps, and converters are crucial, and fortunately, they are in pretty great abundance these days. We have great tools out there.”

A big part of effectively capturing these nuances in classical music is the strategic placement of microphones in the venue. Not only are you recording the performer, but you’re also striving to capture the sound of the location that makes up this overall musical experience. For a choral ensemble, you’re not just recording one singer, you’re capturing the ensemble as a whole. On top of that, you’re capturing the sound of the choir in context to the venue—from the reverb down to the room sound.

In contrast to modern productions, classical music is significantly less heavy-handed in the mixing stage. If the recording stage has been properly executed, the mixing stage need only hone in on the proper balance and panning of each sound source—from the choral ensemble mics, spot mics, all the way down to the room mics. With modern music, the production is expected to go through a liberal amount of plug-in processing and creative manipulation in the mix stage. But with classical music, you want this organic sound to thrive with the smallest amount of digital processing possible. Transparency is key. 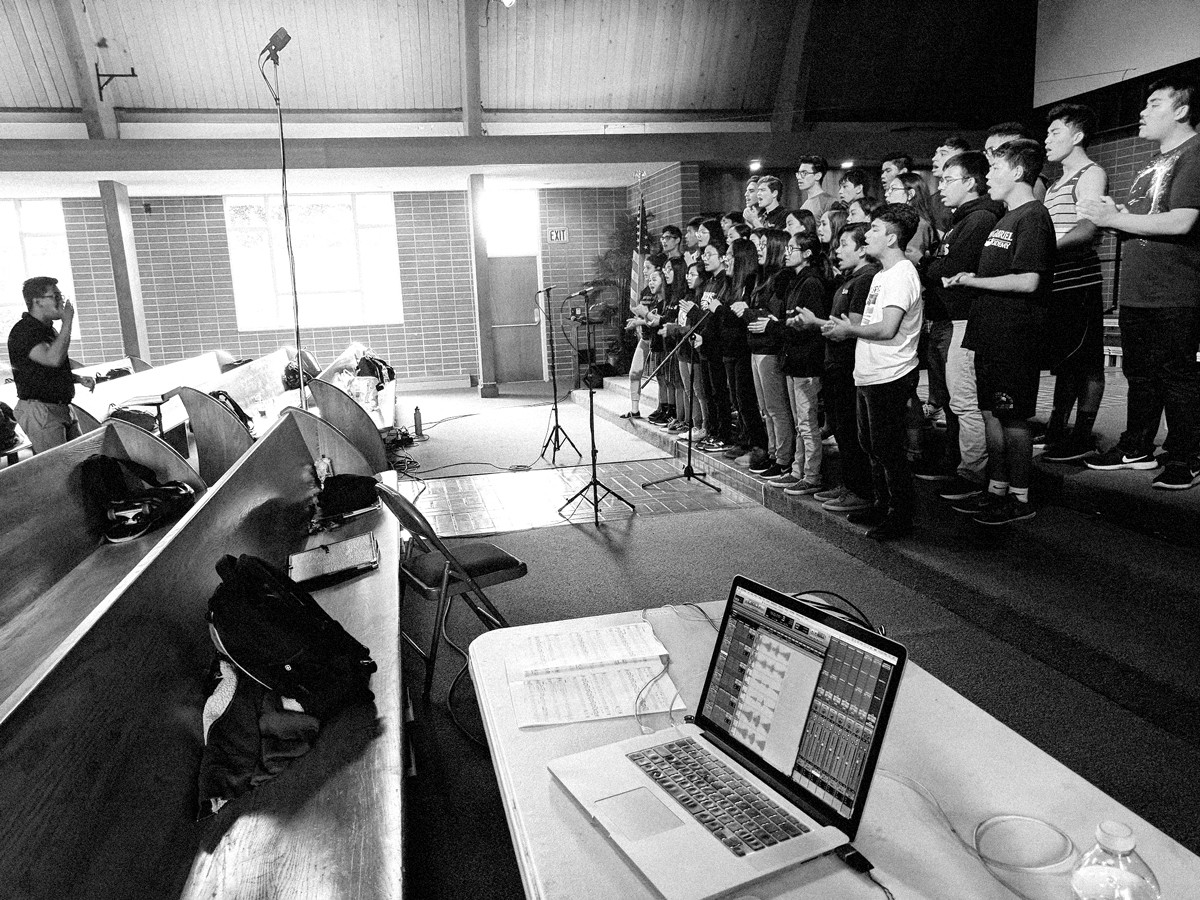 The organic sound of classical music should thrive with the smallest amount of digital processing possible.

What ends up taking the most time at this stage, however, is the editing. Though there’s less time spent on processing the sound source, the focus turns towards painstakingly editing together the best performances from multiple takes of the same music. When editing classical music, you not only have to be fast and accurate with editing chops, but you also have to be sensitive to the nuances of classical performance to ensure a smooth, natural transition from one part of the performance to the next. As Jonathan Wyner notes:

“The editing skills of the engineer and the editing facility of the DAW are enormously important in classical music. It’s necessary to use a DAW that can handle multi-channel editing with flexible crossfades, like the tried-and-true Pyramix, Sequoia, and back in the day, Sonic Solutions.”

Noise reduction is also a significant part of editing classical music productions. Besides editing all the different takes together, you must maintain a sensitive ear to noises that take away from the musical experience. Those extraneous noises might be from someone hitting a music stand by accident, foot stomps, loud page turns, or it could even the occasional loud noise from outside the venue. iZotope RX is the leading tool in the industry for targeting these noises. Jonathan Wyner also points out a very important yet less obvious use for RX that’s particularly unique to choral performances.

“One of the less obvious capabilities of RX is the ability to control sibilance and consonants in a vocal ensemble performance. Choral conductors can sometimes become more concerned about the alignment of the esses than they are about pitch. A cloud of esses—one soprano comes in a little bit earlier than all the other sopranos, for example—tends to distract easily from the performance. So to be able to smooth that out and save a great performance, I’ve had conductors look back at me filled with gratitude.” 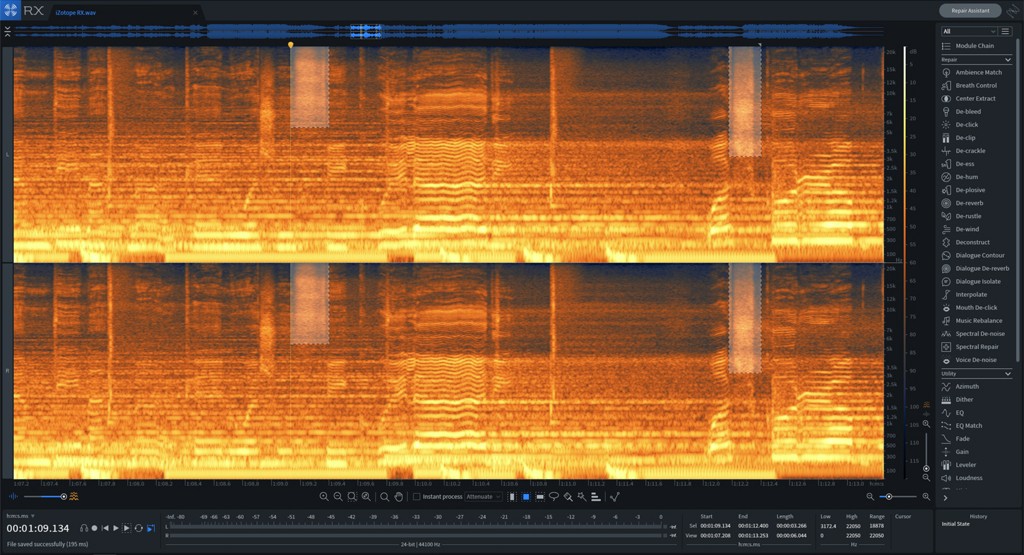 In addition to sibilance, RX does an excellent job controlling the alignment of plosives (t, k, p, d, g, and b sounds) through editing in its Spectrogram. When recording a large group of singers, no matter how excellent the performance is, there will come a time when those sibilance and consonants won’t be in sync amongst all the singers. So start practicing those RX skills now so by the time the next classical mixing gig comes along, you’ll be known as the miracle worker! 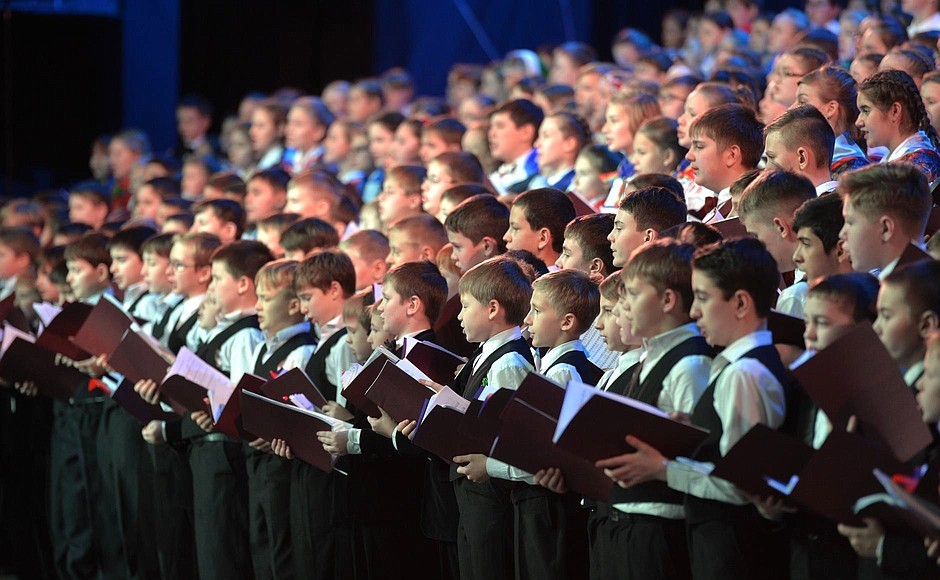 Controlling sibilance and plosives with RX is a valuable skill in the production of classical and choral music.

At this stage of the production process, very little if anything is added to the sound of the classical recording. As Jonathan Wyner aptly puts it, transparency in the tools is everything. The sonic and harmonic complexity of a beautiful acoustic recording makes it so that any processing you apply both in the mixing and mastering stage can be quite exposed, down to the smallest artifact. That’s why thoughtfulness and intent with every adjustment are crucial. The purpose is to not leave your fingerprint on the final sound, but rather, use the tools at your disposal to help the listener fully experience classical music as it’s meant to be heard—as an earnest live performance on location.

With this in mind, mastering engineers are left with the challenge of ensuring that classical music can effectively translate in today’s modern era. And that may include the discussion of loudness, as experienced early on by Jonathan Wyner with his classical music clientele.

“I once was asked by a renowned string quartet for their record to be ‘loud enough.’ It's almost like an oxymoron to think about loudness and classical music in the same sentence—certainly in the way that we express the idea of loudness in pop music productions. I was startled for a moment, until I sat back and thought about what it was they were really saying. What they wanted was clarity and impact. They wanted the skills that would allow a string quartet recording to effectively come across and lend well to the modern ear.”

There’s indeed a virtue to taking a step back and assessing how classical music can effectively be represented to the modern ear. It is possible that a location recording of a classical performance might have excessive dynamic range or could be riddled with too much uncorrelated information that it takes away from the impact and clarity of the music. Therefore, when working on a classical program, you can't simply ignore when someone raises the question of “loudness” even though they are expressed in very different aesthetics and genre context. It takes skill and experience to finesse the art of loudness in the context of the classical world. And it starts with choosing the right type of limiter for the job. As Jonathan Wyner explains:

“When choosing limiters, I certainly am more likely to choose one that's got a longer buffer (slower attack/release time). The result is a lower distortion and higher accuracy on my masters. If I ever need to use a limiter, I only apply it in spots where it’s needed. I won't have it turned on the entire time if I can avoid it.”

Even after sectioning this topic into two parts, we are still barely scratching the surface of classical music recording. If you’re someone who’s only recently begun exploring the world of classical productions, the best way to keep on learning is just by taking the plunge! Record more classical performances, and more importantly, listen to the needs of the classical musicians and producers you’re working with.